The Piping Plover Chicks at Presqu’ile are almost 4 weeks old.  Look how they have grown! 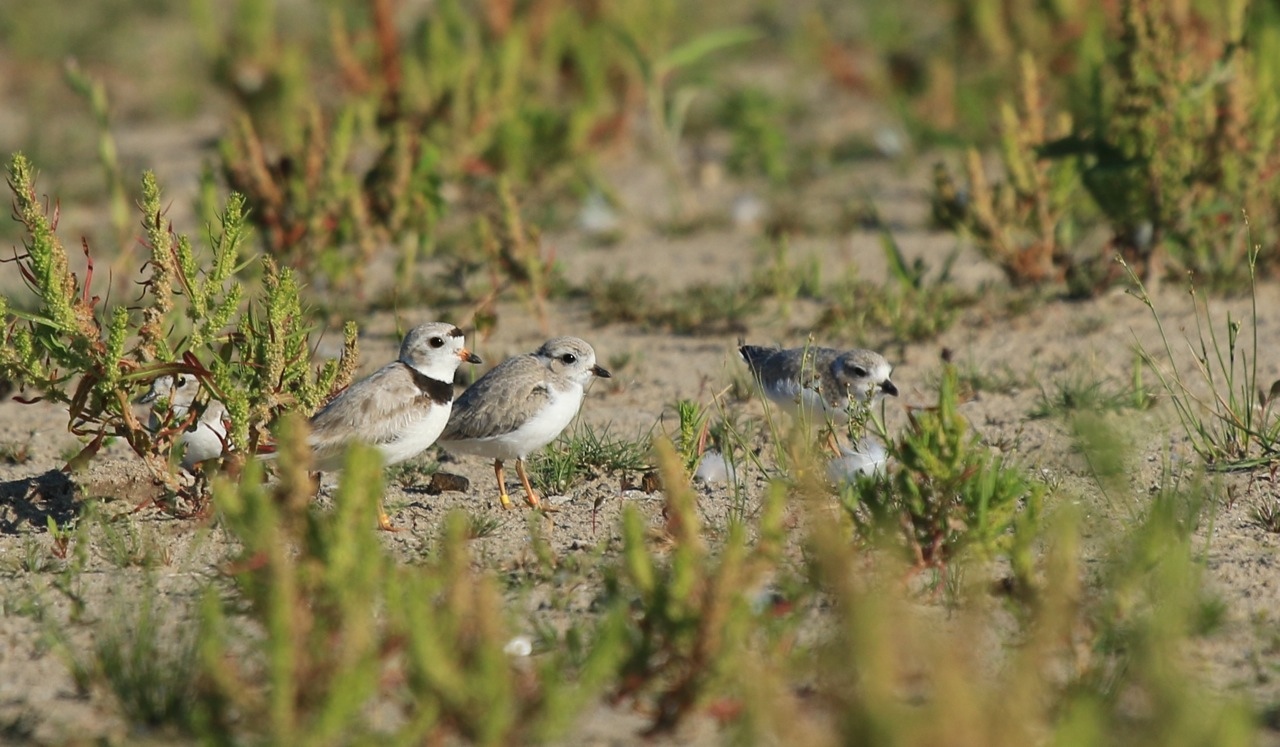 All 3 chicks are alive and well.  They have had  lot of changes in their lives over the past couple of weeks. 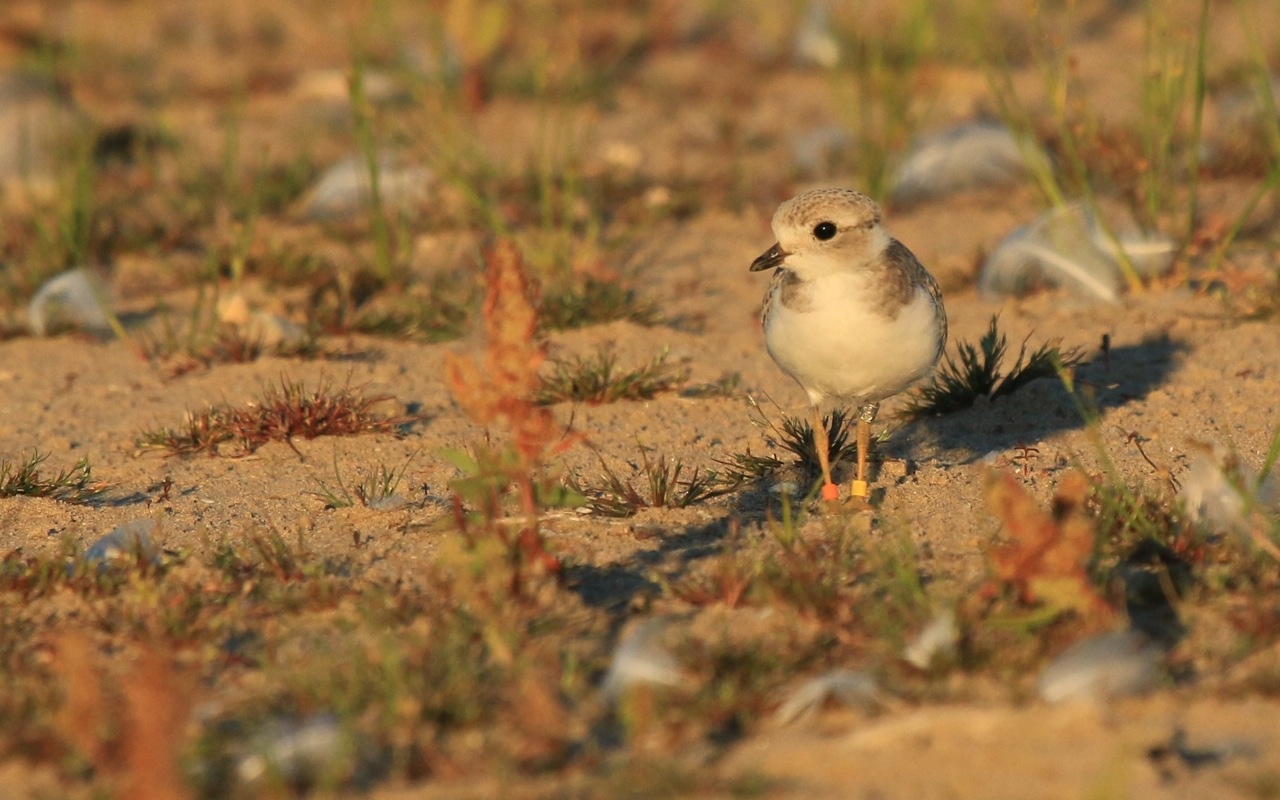 When the chicks were a couple of weeks old,  they received identification leg bands.   All three have the same colour combination- orange on right leg and yellow on left leg.   Then they each have a silver band with its own unique ID number. 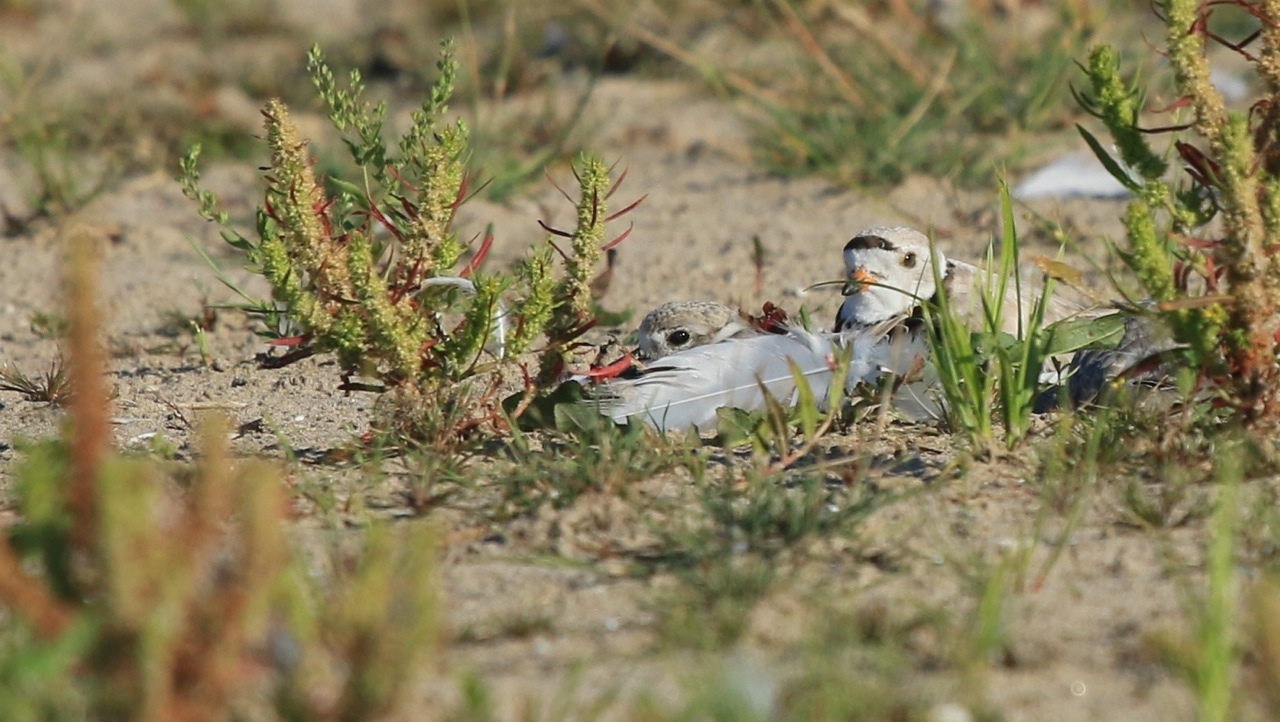 Another big change is that they are being looked after by just the dad now.   Mom left when they were about a week and a half old.  We thought she had taken off for Florida but she has been seen at Darlington beach to the west of here.  She also returned to Presqu’ile last Wednesday but was chased off by the dad, who is claiming sole custody of the chicks at this point. 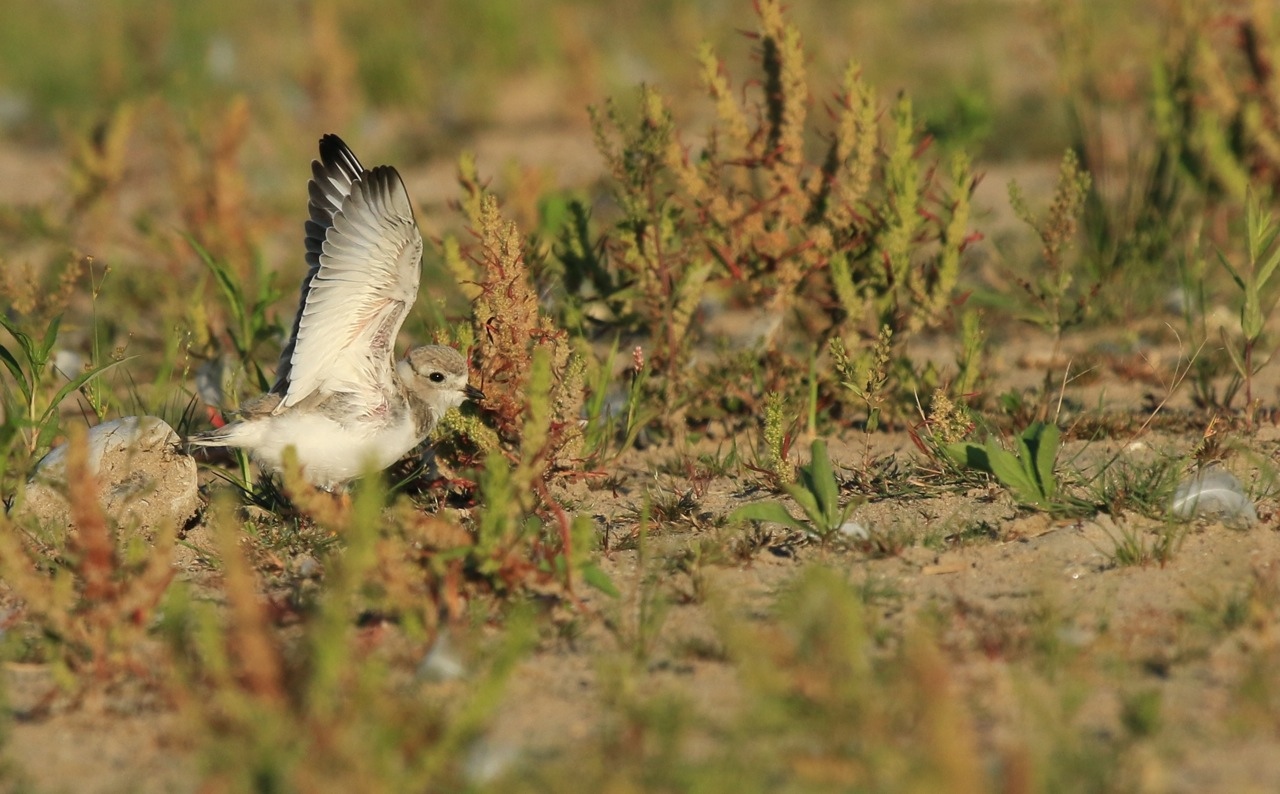 Chick getting ready to fly

Dad has a lot on his plate, as the chicks are starting to take short flights up and down the beach, and running all over the place. 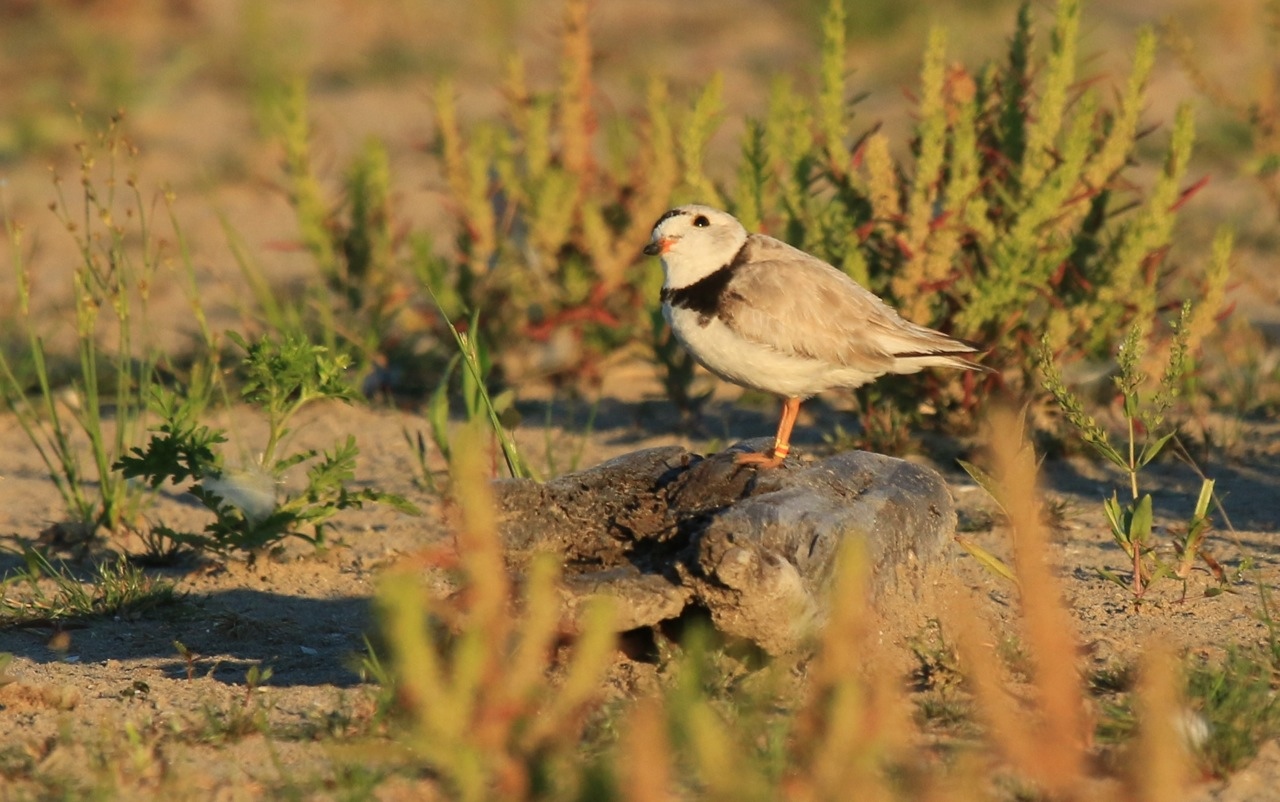 When he perceives a threat, dad calls in his distinctive “piping” call, and rushes to collect the babies near him. 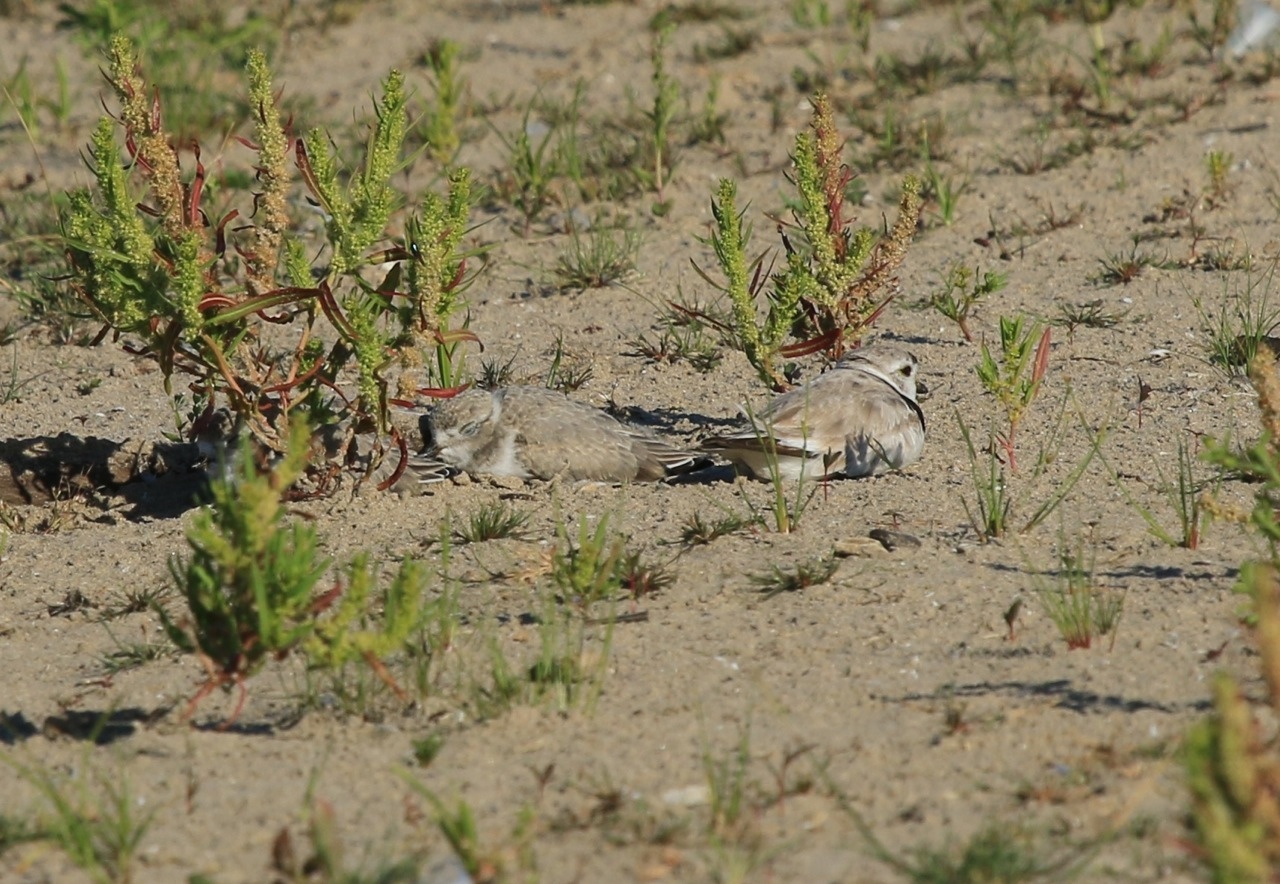 Can you find 3 Plovers in this picture?

Last Saturday evening I was babysitting the plovers, and everything started out pretty quietly.  All 4 family members were resting on the beach. 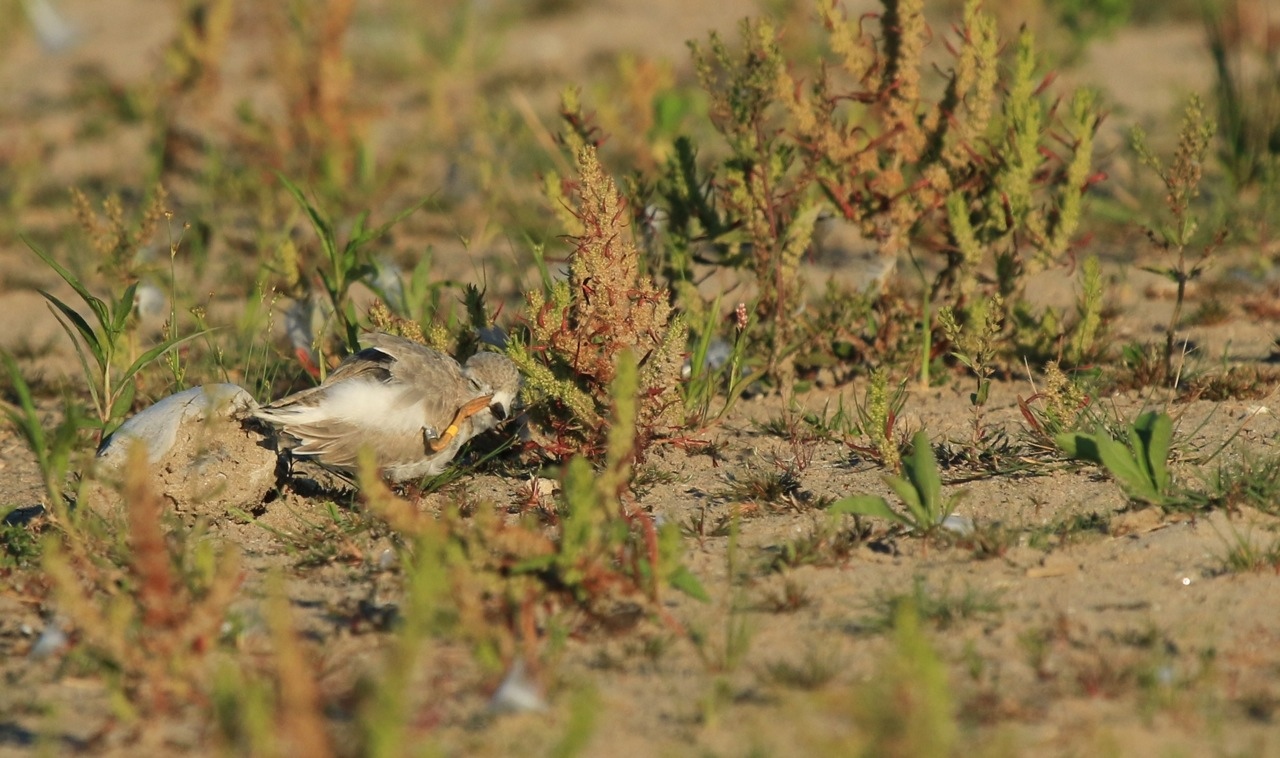 A little preening, a little wing stretching and flapping, but pretty mellow. 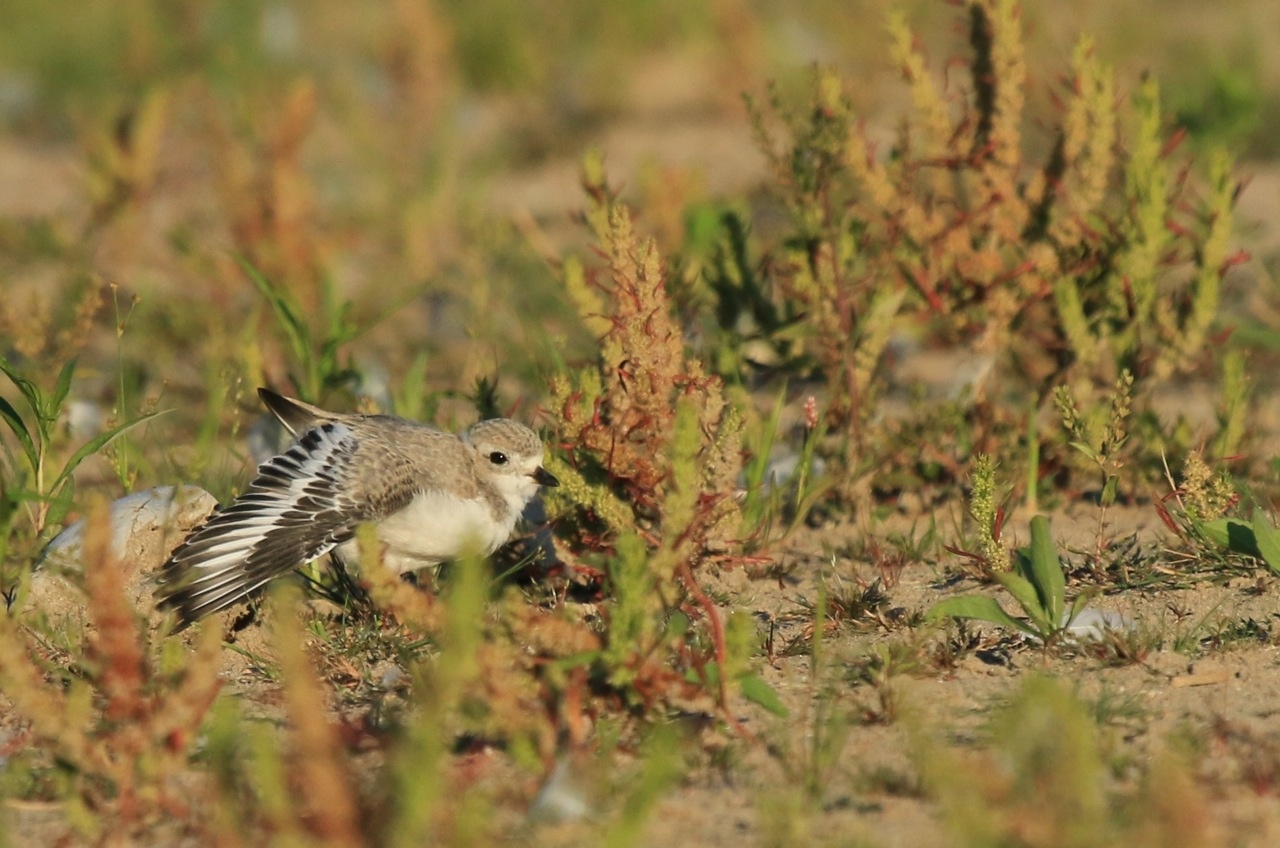 Look at those beautiful primary feathers. 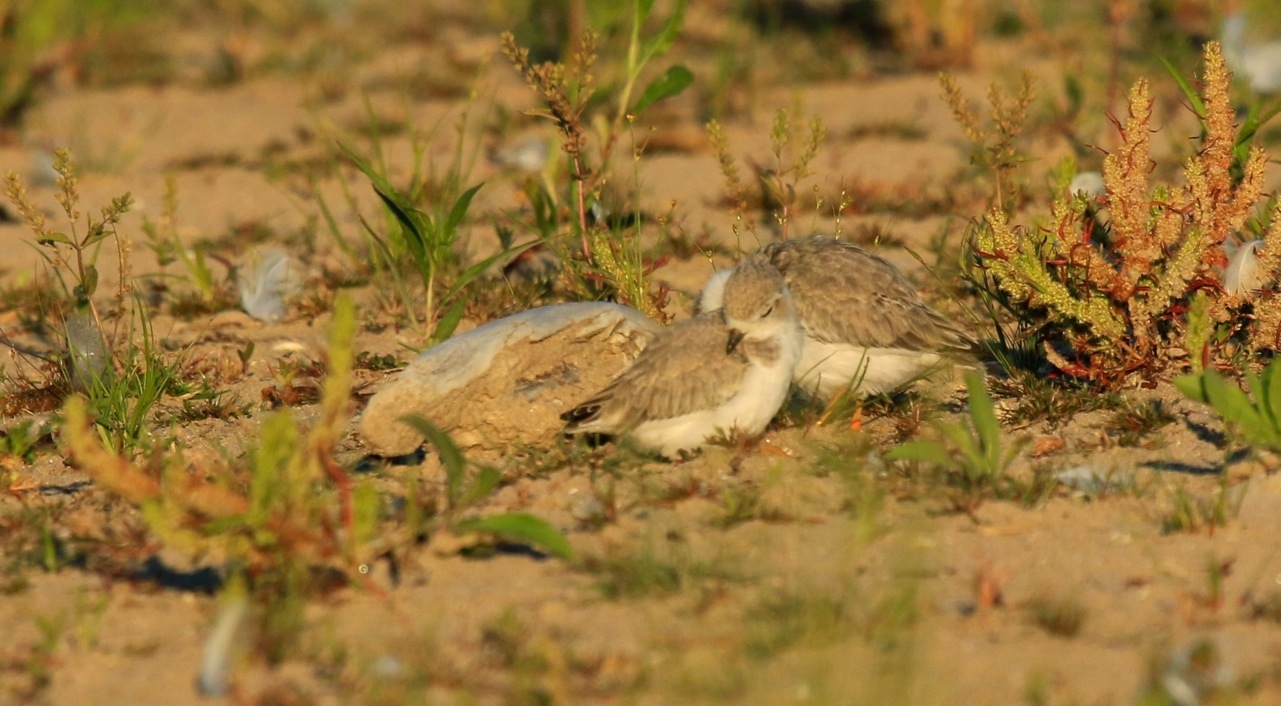 Two of the chicks stayed together, pretty sleepy. Sometimes it’s really hard to find all 3, they are so well hidden. 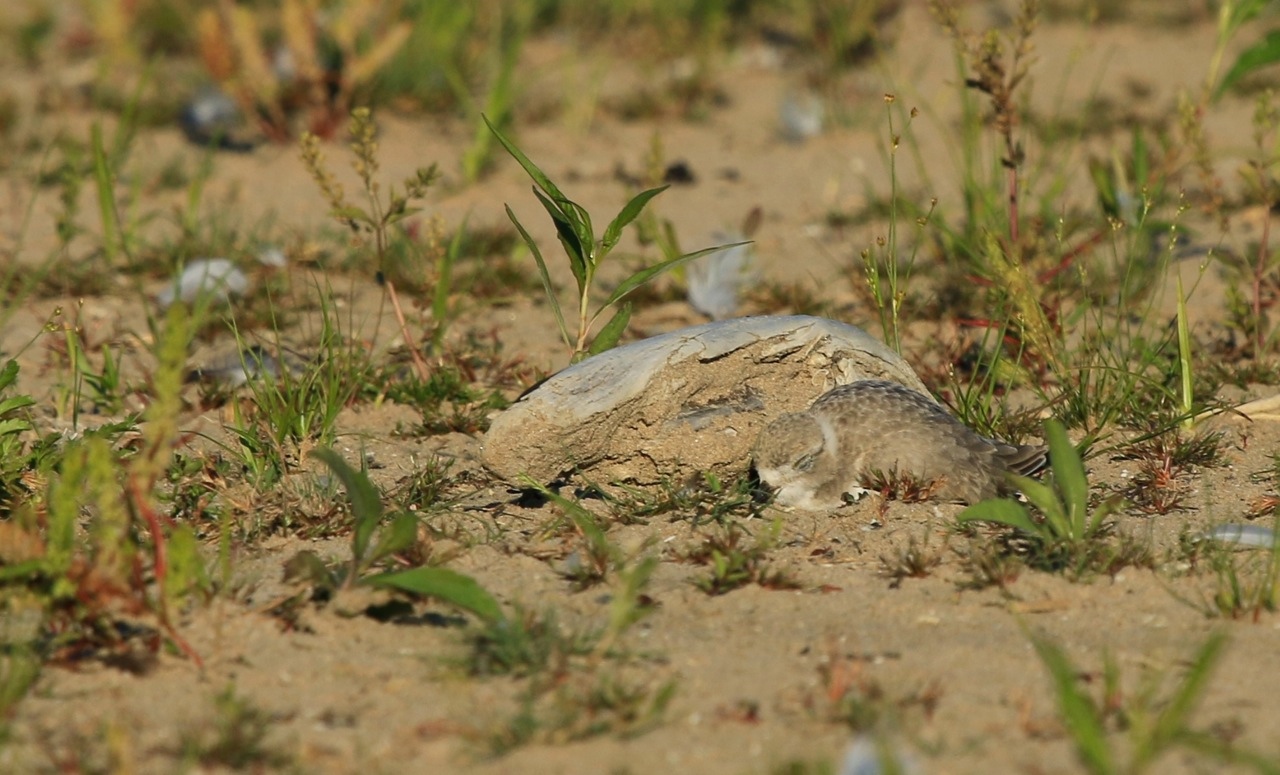 Perfect spot for a nap

There’s number 3.   I love this scene.  What perfect camouflage. 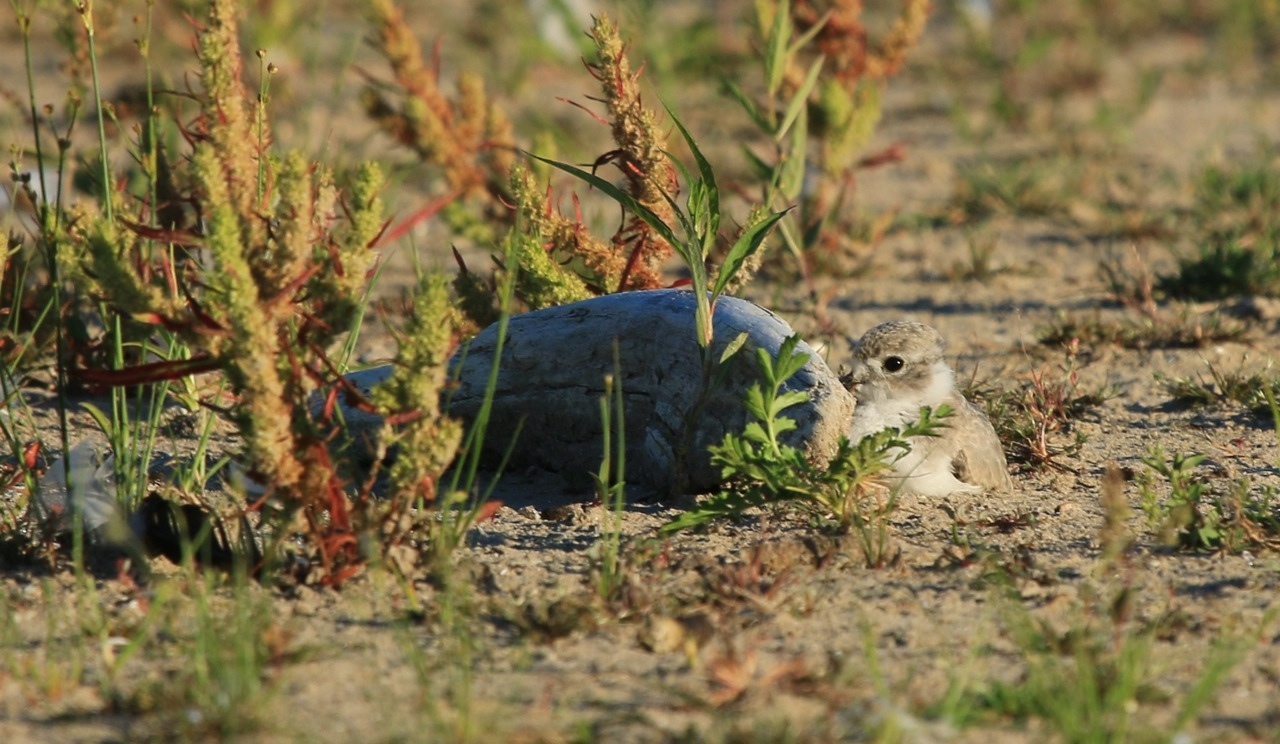 AH there you are 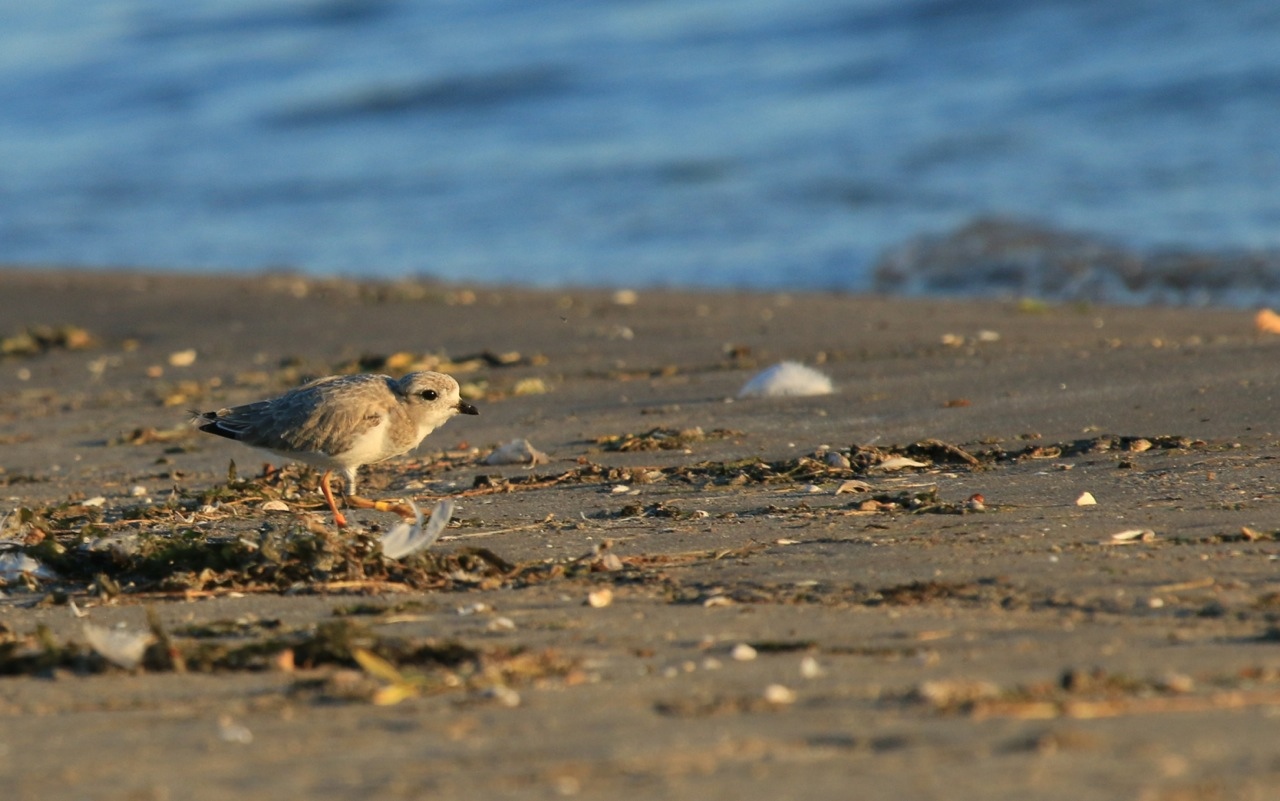 While dad and the other chicks slept, one of the chicks ran down to the water’s edge and started to feed.    It stayed down there for about 40 minutes on its own.   This was the first time I had seen one of the chicks at the water- they usually stayed further up on the beach. 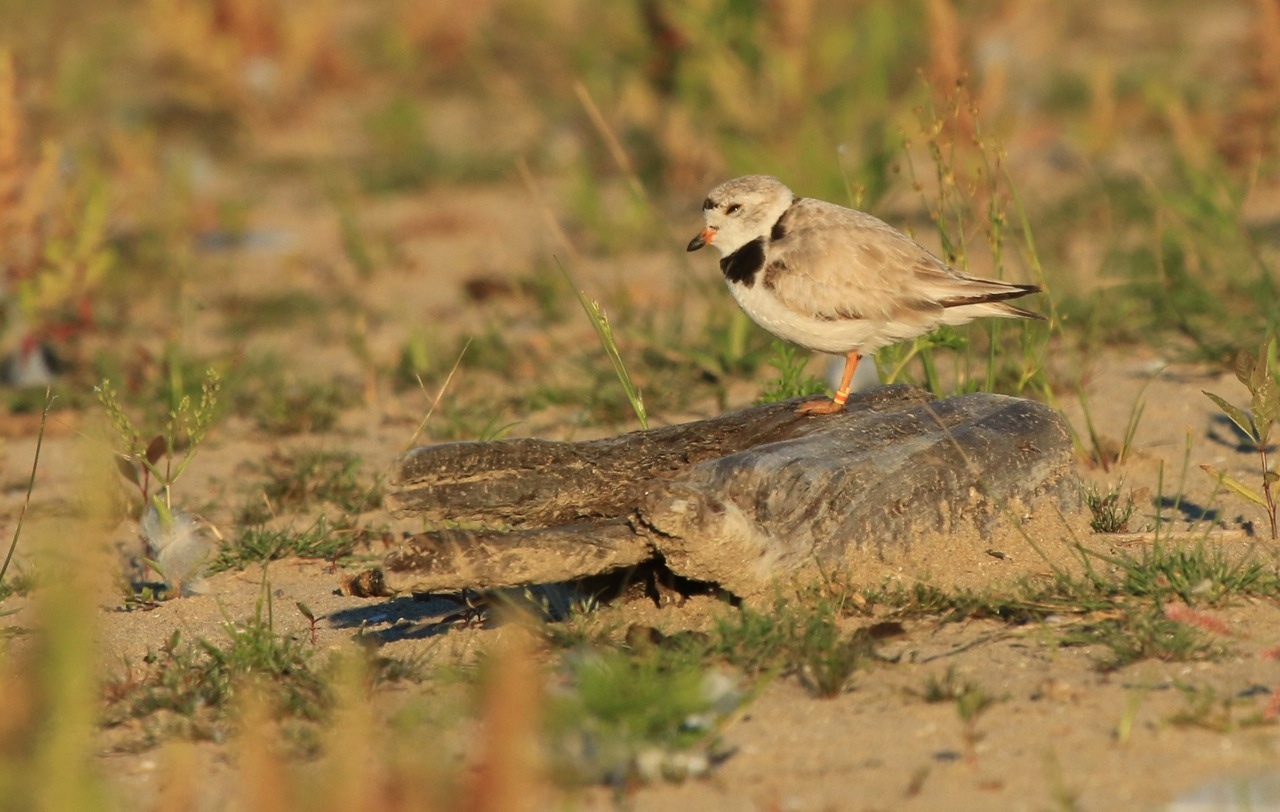 Dad did not seem too concerned. 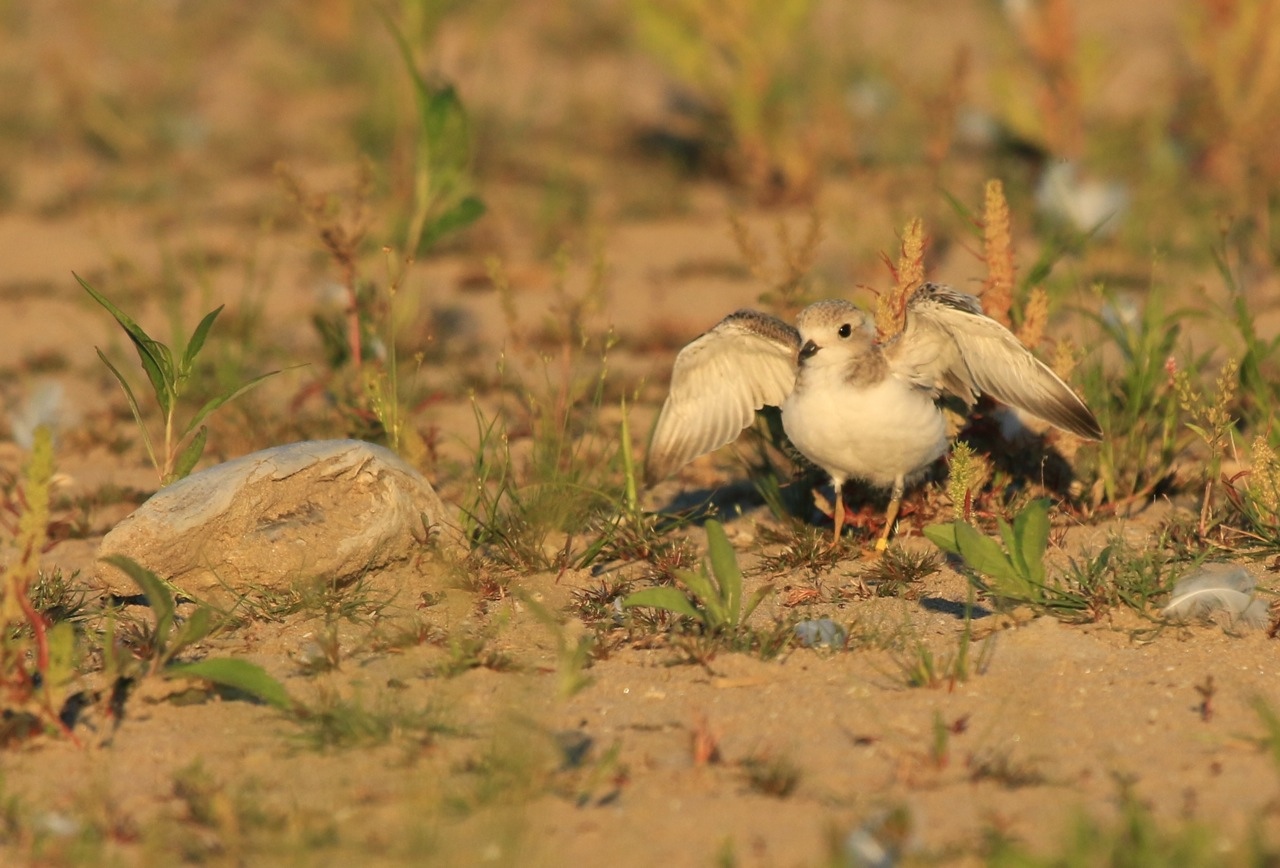 Eventually around 8:00 pm dad and the other two chicks woke up and joined the first chick down at the water’s edge. 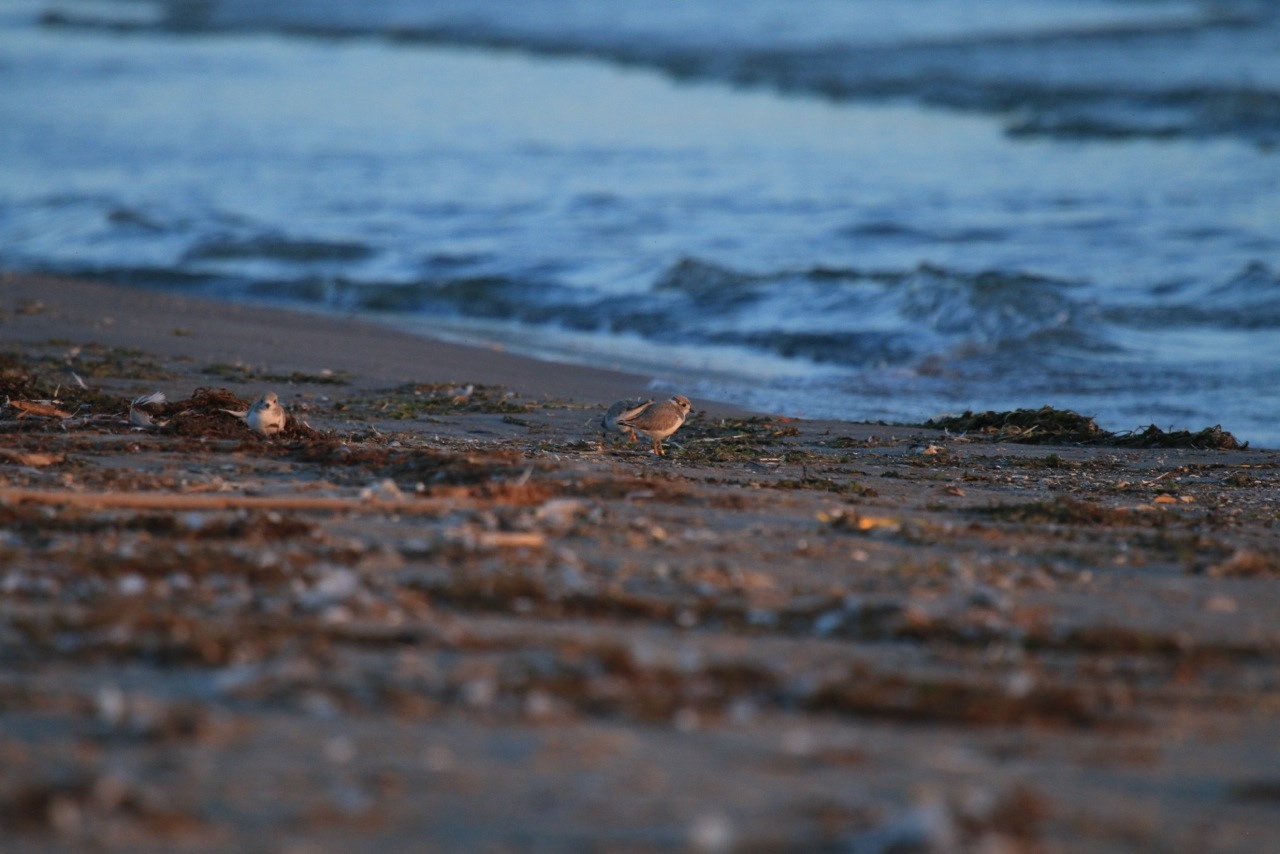 As the sun dipped below the horizon, the 4 Piping Plovers were still feeding at the water’s edge.   In another week or so the chicks will be flying well enough to go wherever they like.   Then at some point in August, our Piping Plover family will begin to head for their winter home in Florida. 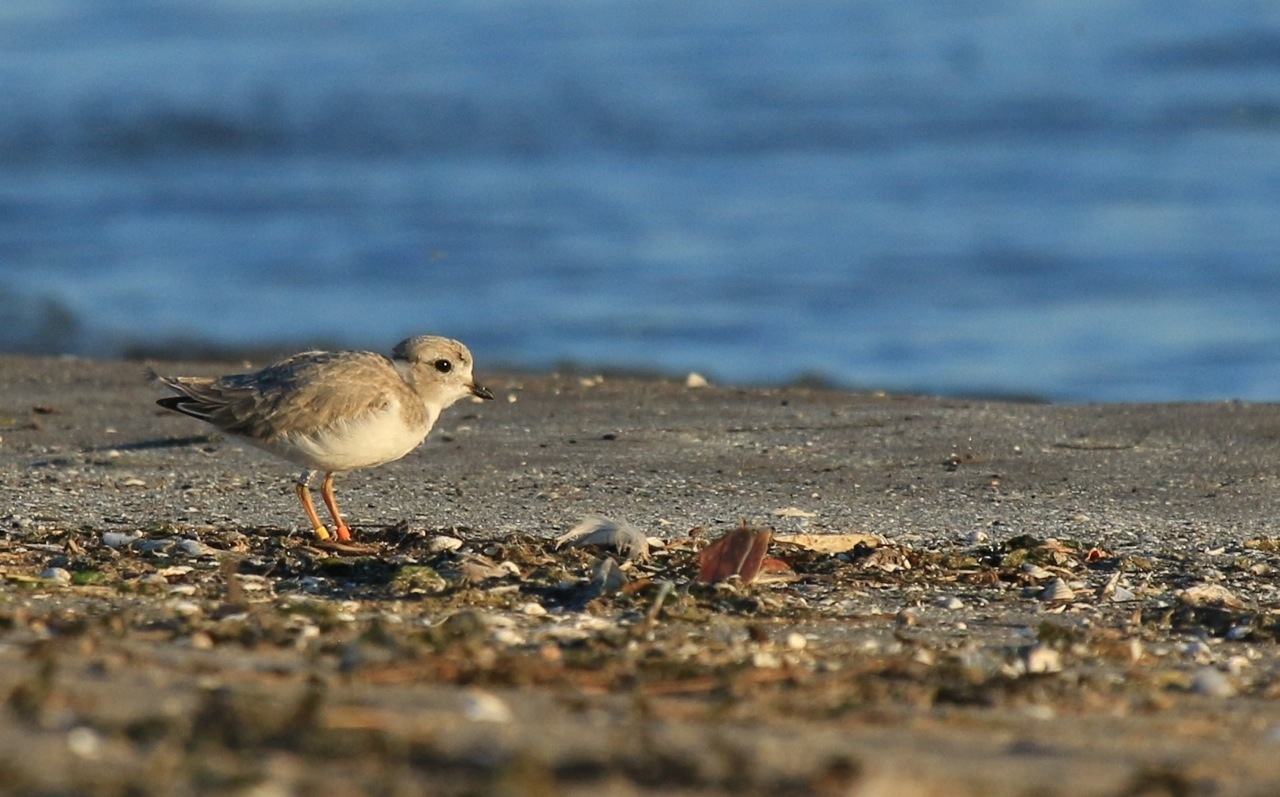 With help from the Park staff and over 50 volunteers, the Piping Plovers have had a very successful nesting season here in Brighton.

Next May when migration is in full swing, we will all be keeping our eyes open for newly arrived Piping Plovers. Especially three young adults with an orange band on the left leg, and yellow band on the right leg.   Bon voyage little chicks!   Hope to see you in the spring.

If you are like me and can’t get enough about Piping Plovers, Check out these links:

-Watch this cute video by Anja showing the chicks at a couple of weeks old!  They are so funny!   Anja has done a great job capturing them as they scoot all over the place. More videos of the plovers on her Youtube channel: Brighton Events

– Revisit Protecting Piping Plovers :  my blog from when they were just a few days old.