Here’s a little victory- when I masked up and stuck my hand out the window of my car to pay the $9.00 fee for the Amherst Island Ferry passage the ferry man said it wasn’t necessary because of covid. Actually he just pointed to his mask and shook his head, saying “not necessary!” His eyes were smiling. Funny how good I am getting at reading eye smiles.

More smiles were soon to come. I found a parliament of Short Eared Owls! 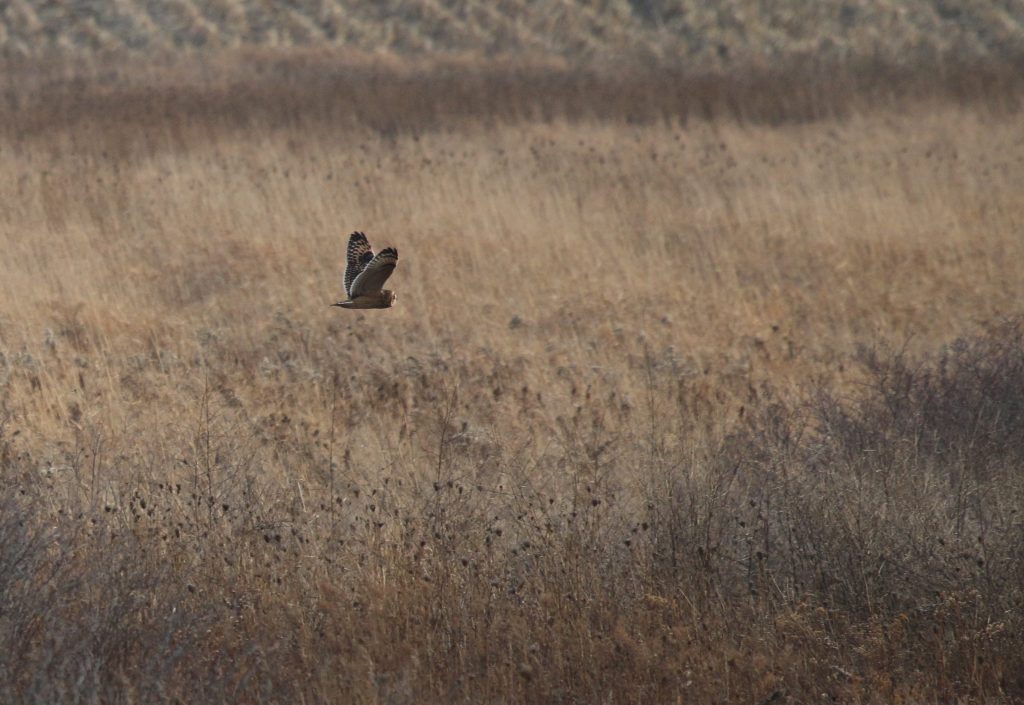 After driving around the south shore of the island and seeing a Snowy Owl sitting up on an Osprey platform sleeping, about 20 Northern Harriers hunting, and some big Rough- Legged Hawks sitting on far away trees, I headed past the sheep farms and wind turbines on the north side of the island. Soon enough I saw a lone bird flying over the fields – light like a moth with long slender wings. 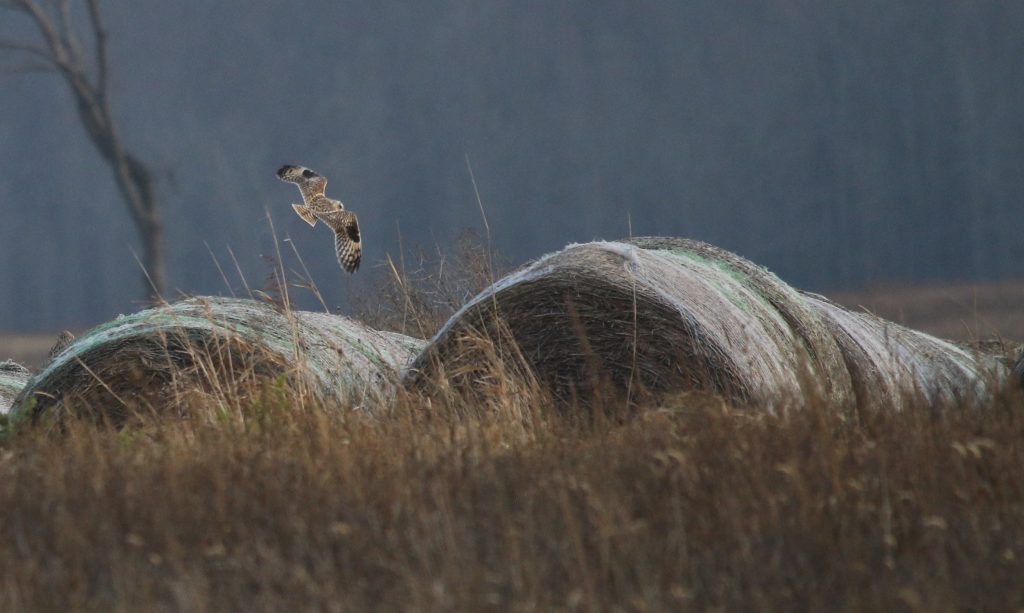 As I gazed east down the road I could see more owls swooping over the fields, and a line of hay bales. I just used my car as a blind, rolled my driver’s side window down far enough so I could rest my camera on it, and I started to record the action.

Look closely at the photos – there are owls flying, but also owls resting on poles and on the hay bales. 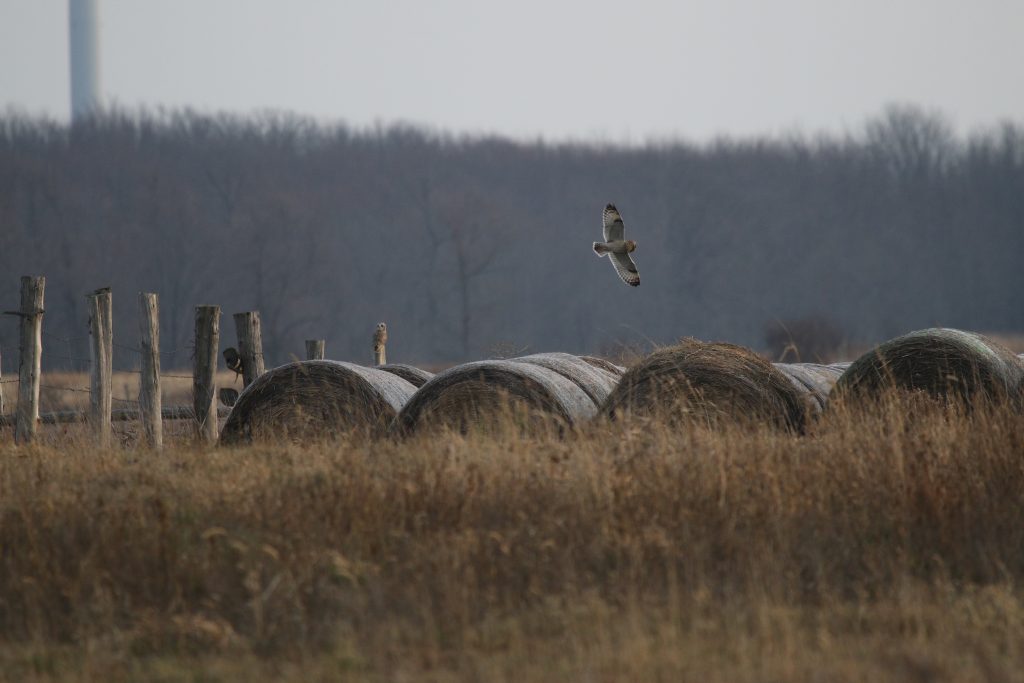 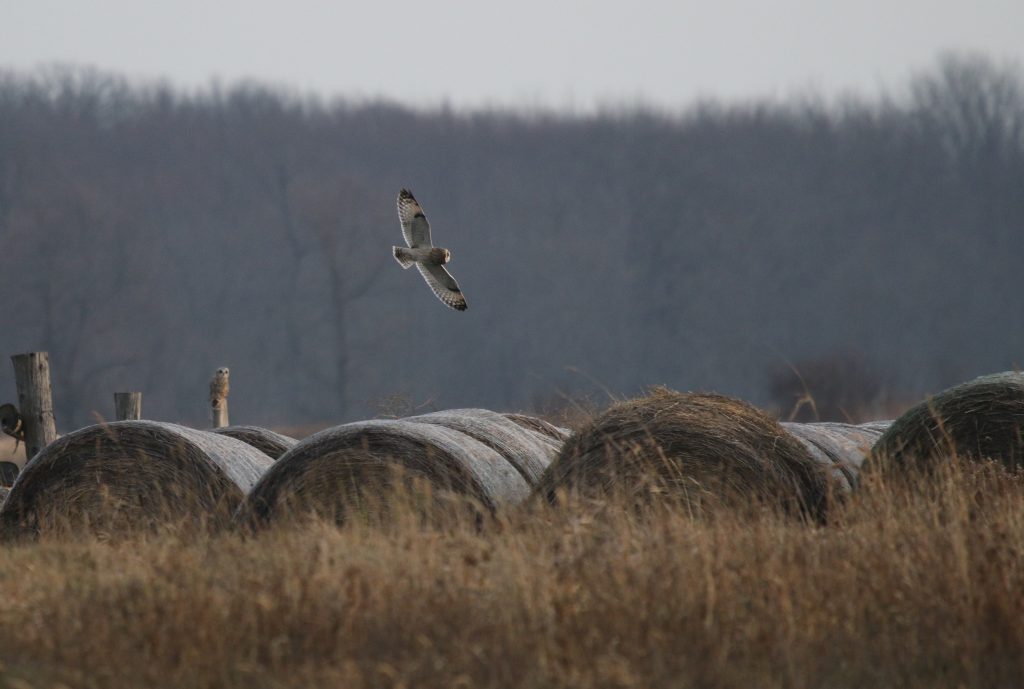 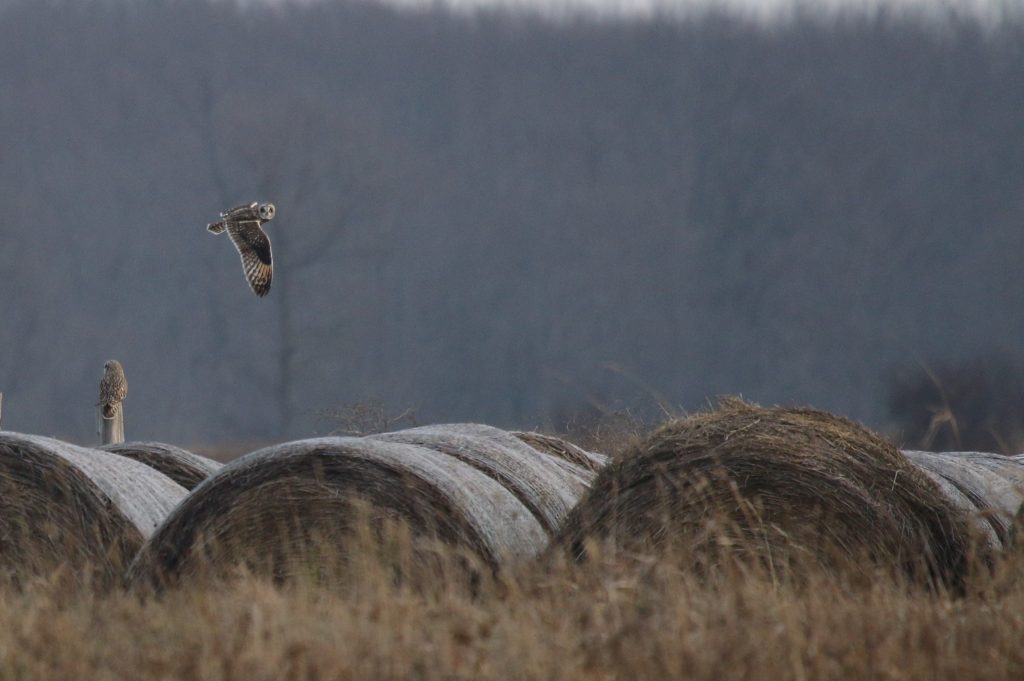 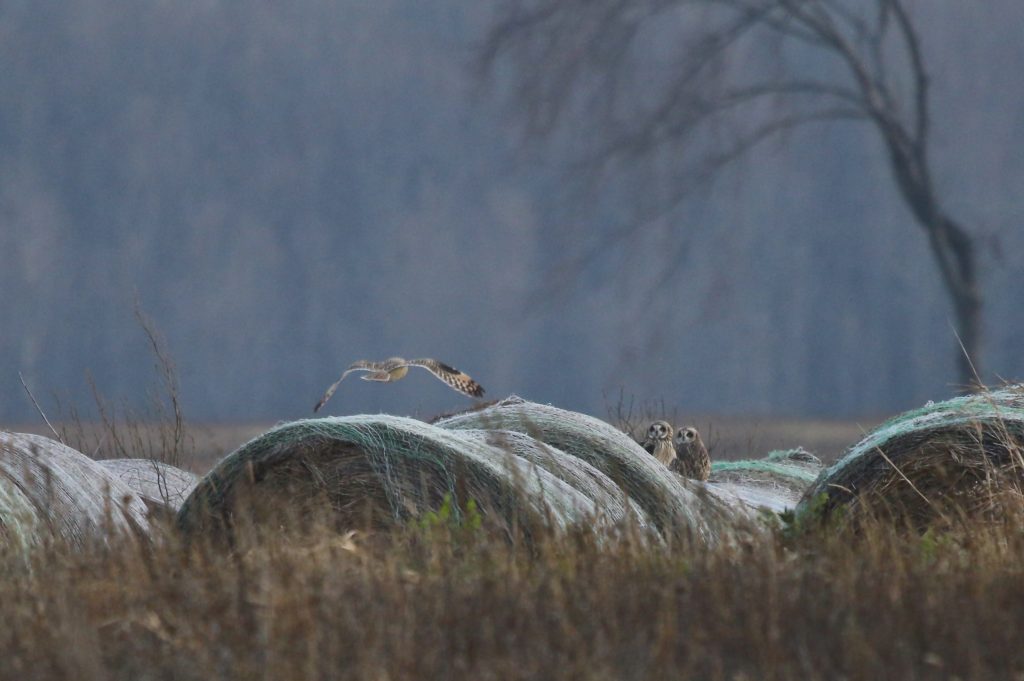 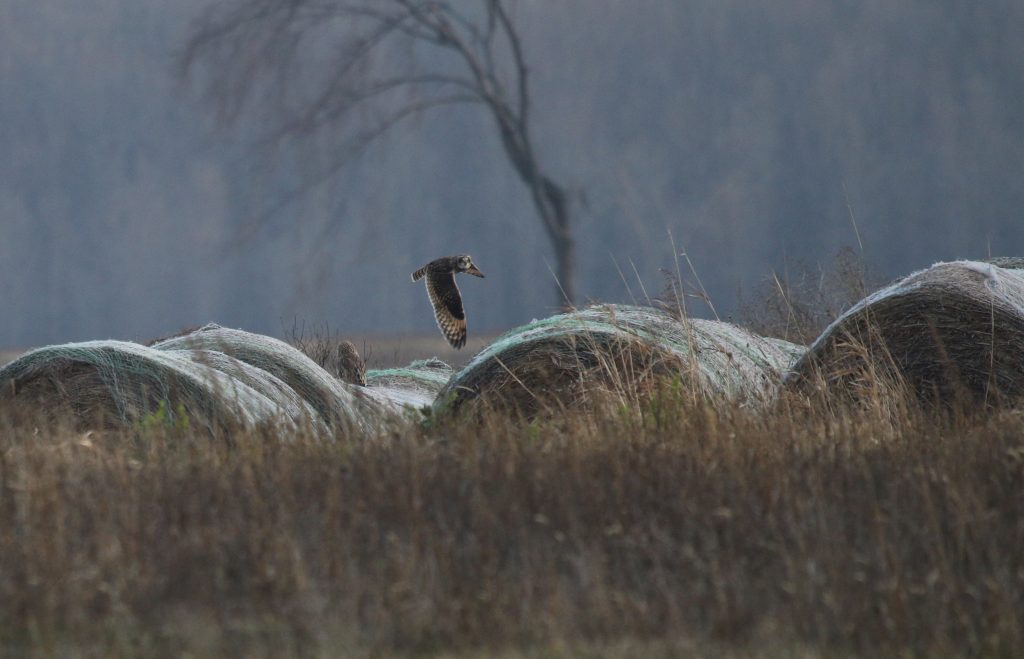 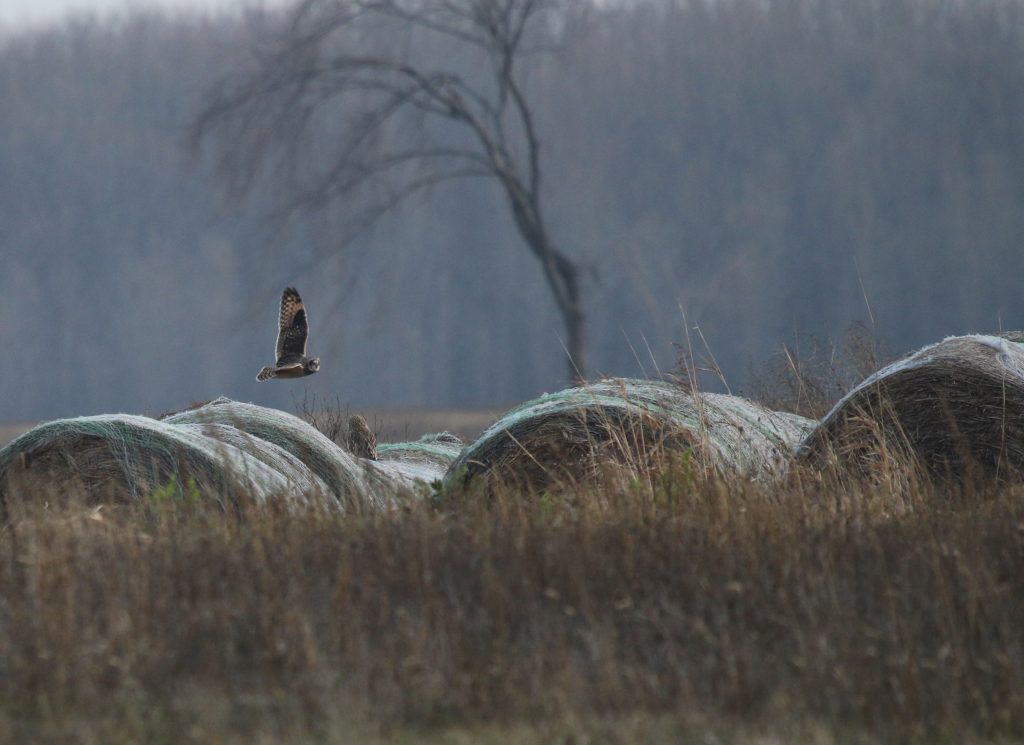 The owls even flew way up in the air, for some aerial acrobatics! These owls were hunting, fighting, trying to steal voles from each other in mid air. Once one owl had a successful hunt, the others would swoop all around it and try to get it to drop its prey.
You can see wind turbines in the background of some of these shots but the owls are nowhere near them. It’s just the turbines are huge and they dominate the little island. 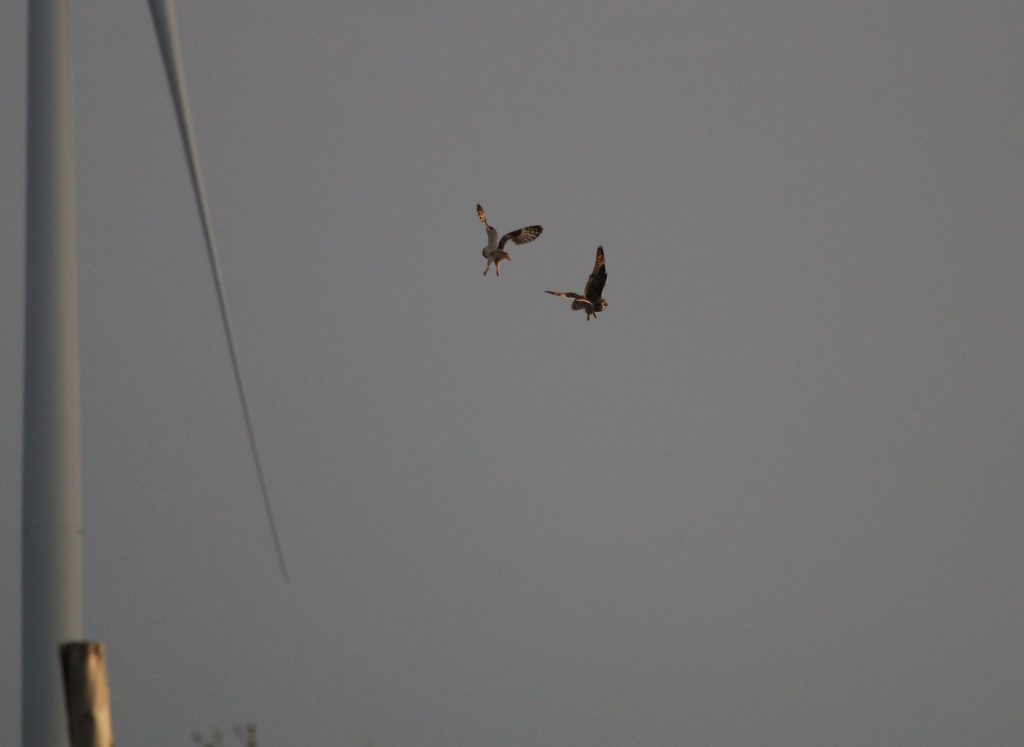 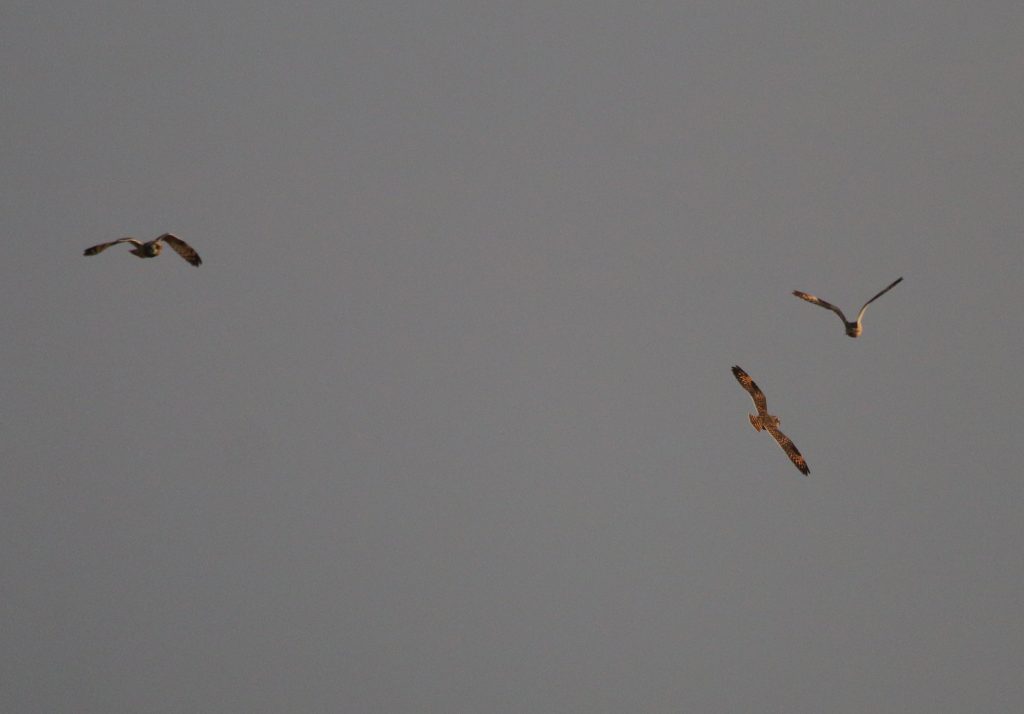 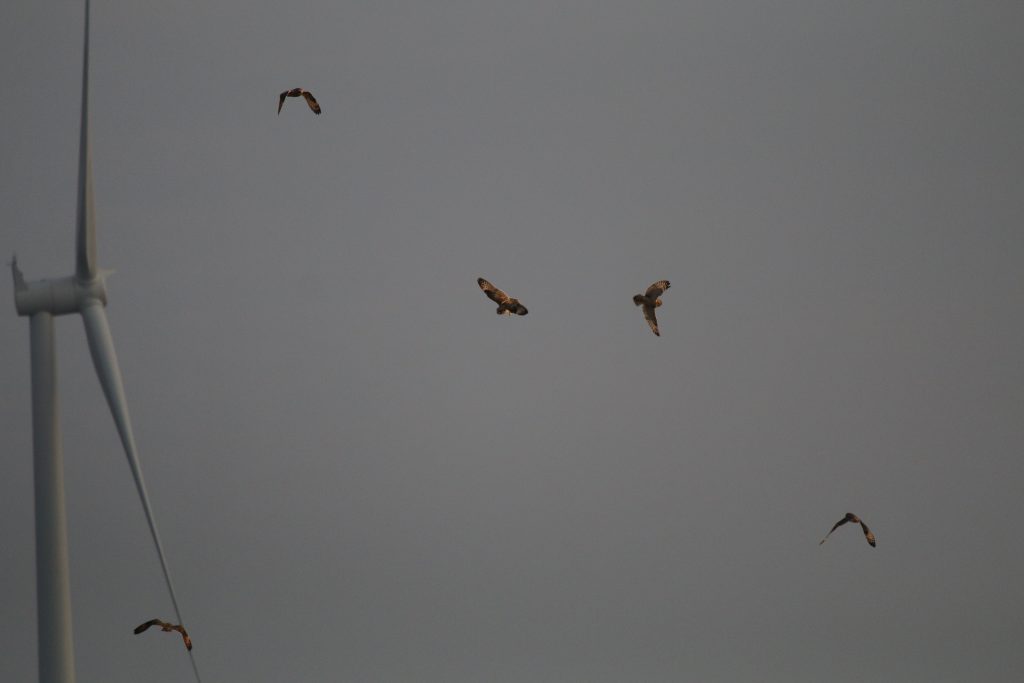 Short Eared Owls are crepuscular, which means they are active at twilight. They roost in some dense cedars during the day, and come out as the sun is going down. There are abundant meadow voles on Amherst Island which make it a mecca for all kinds of raptors, including these medium sized, feisty Short Eared Owls. They live there all year round, and some nest there too. It seems to have been a good year for these Shorties, as this group had more than a dozen owls. I know people have found more Short Eared Owls in other places on the island, but I did not go looking – I stayed and enjoyed what I had found.

Fun fact: Short Eared Owls bark! Their vocalizations match the energy of their flight, and make me smile and laugh out loud. Click here to listen to their sounds.

During the pandemic, the ferry is free. If you are reading this after the pandemic lucky you, but you will have to pay $9.00.

Thanks for coming on my trip to Amherst Island.