Home animals The Wilds of Winter

The Wilds of Winter

It’s 2021 and we are still in the middle of a pandemic.  The good news is that there is nothing stopping me from going outside and wandering around by myself to see what wildlife I can find.  Often there are more misses than hits – but I know the only way I will see anything exciting is to get outside and try. Here’s an overview of the last couple of weeks. When I put it all together I realize it’s been really good! 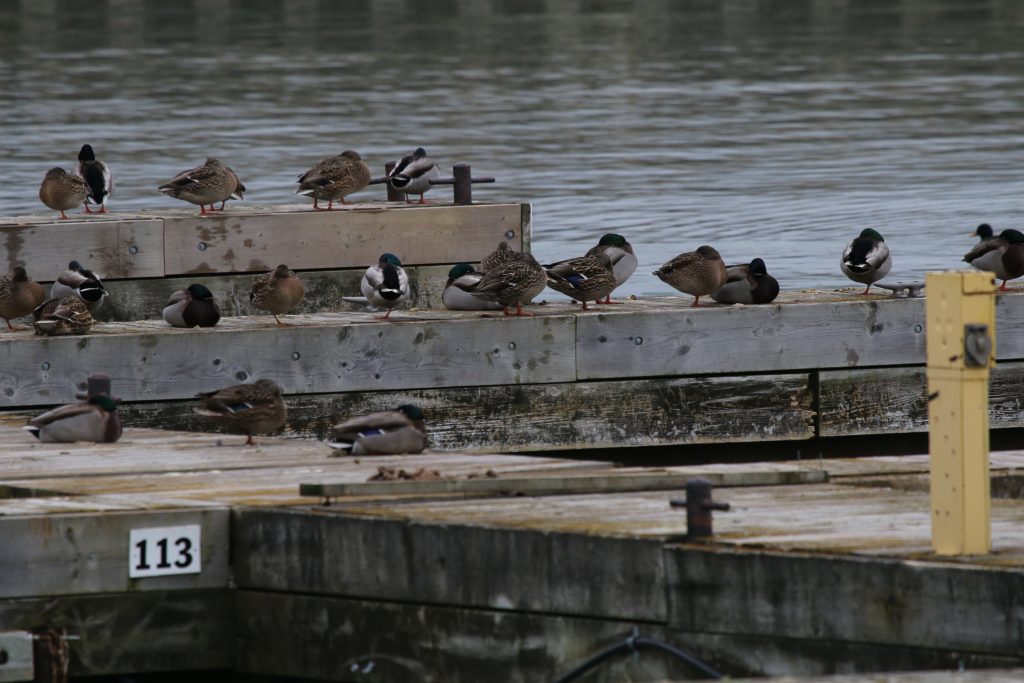 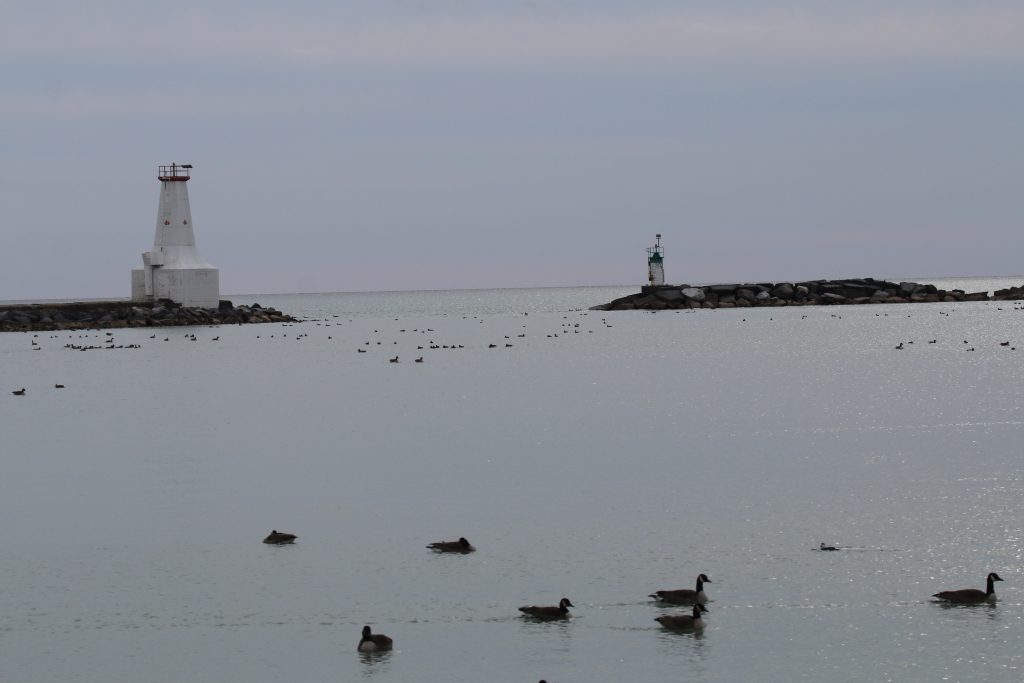 Reports of a Greater White Fronted Goose led me to Cobourg Harbour. This is a bird I have never seen before, and I thought I’d go try to find it. Turns out this is like finding a needle in a haystack. 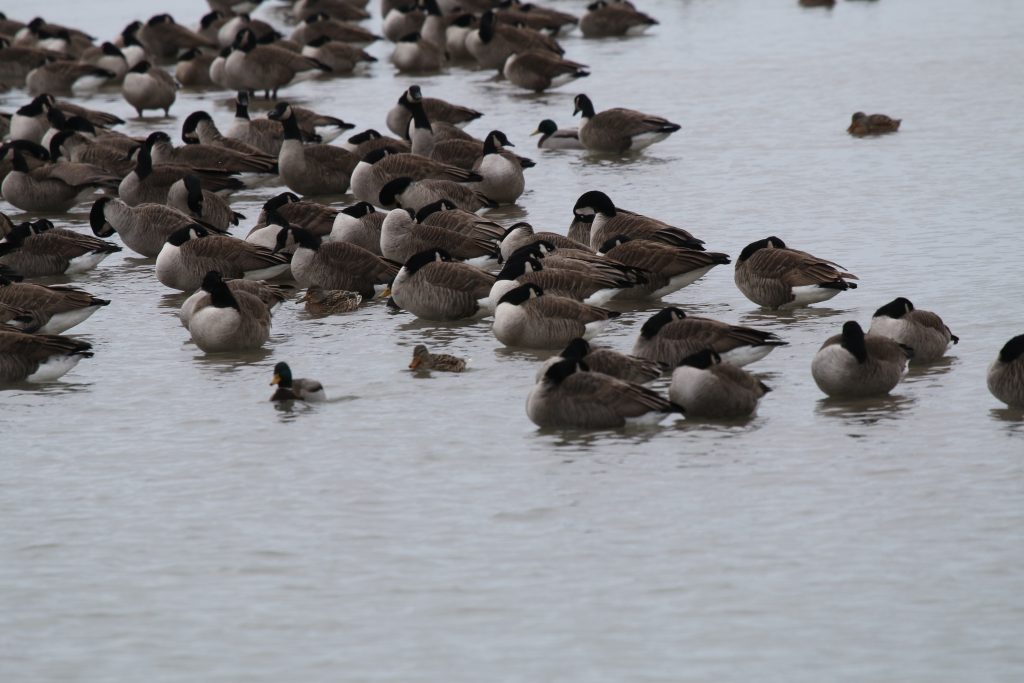 A lot of Canada Geese and a couple of Mallards

There are literally thousands of Canada Geese in Cobourg Harbour, and the special goose hangs out with them most of the time. I have not found it, though I have visited the harbour more than once.   Despite missing the Greater White Fronted Goose, I got to see great numbers of other waterfowl. 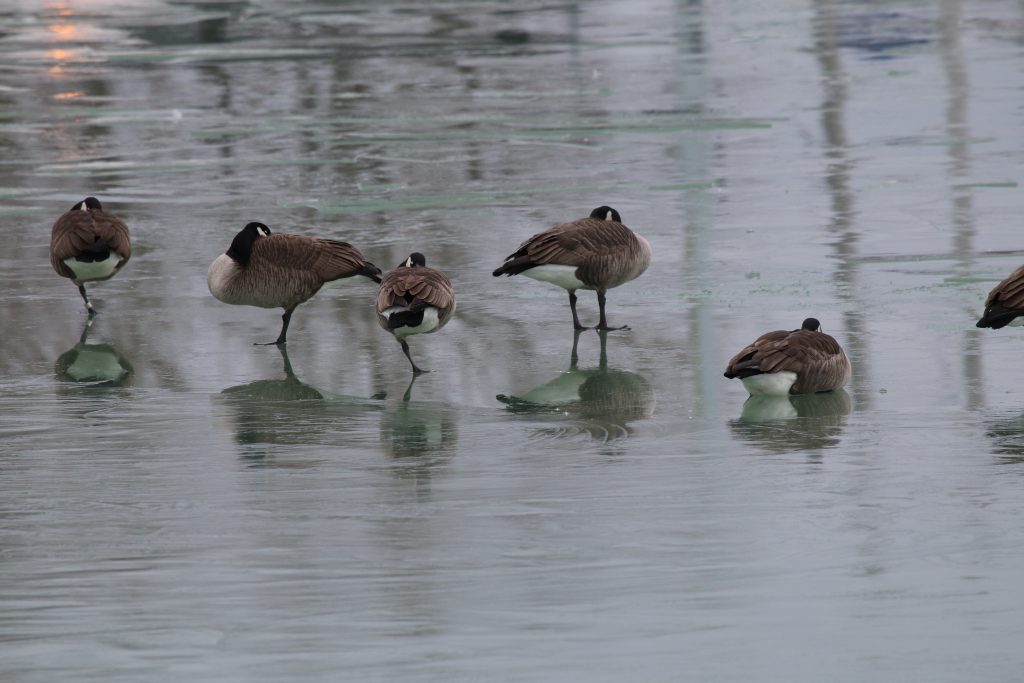 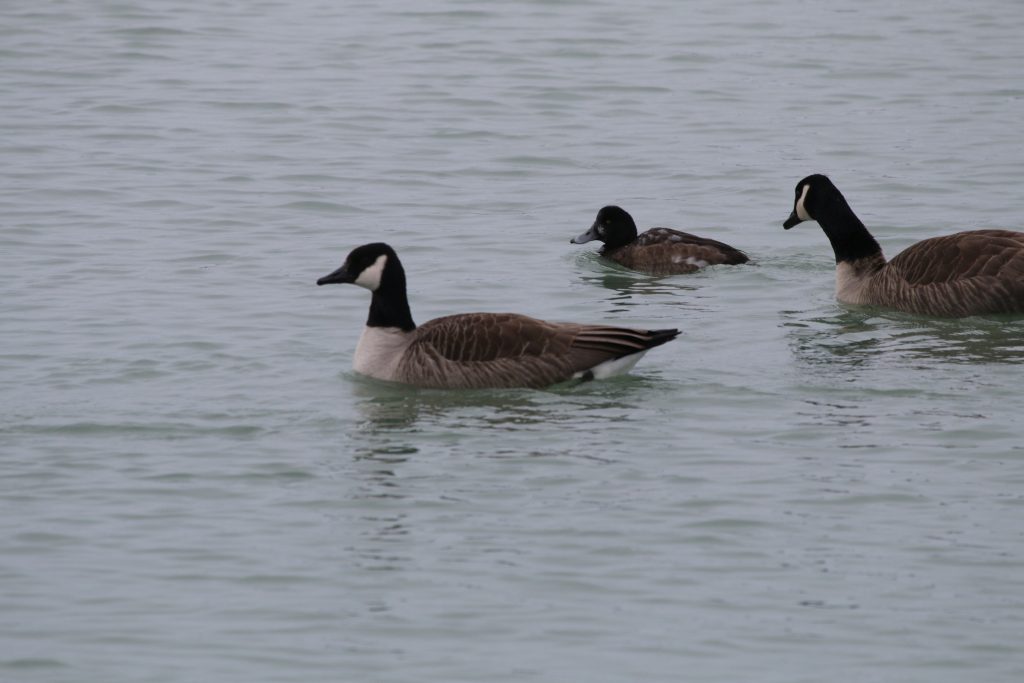 I think this is a Greater Scaup with the geese. It might be a Lesser Scaup. Hmmm. Anyway, it’s a Scaup. 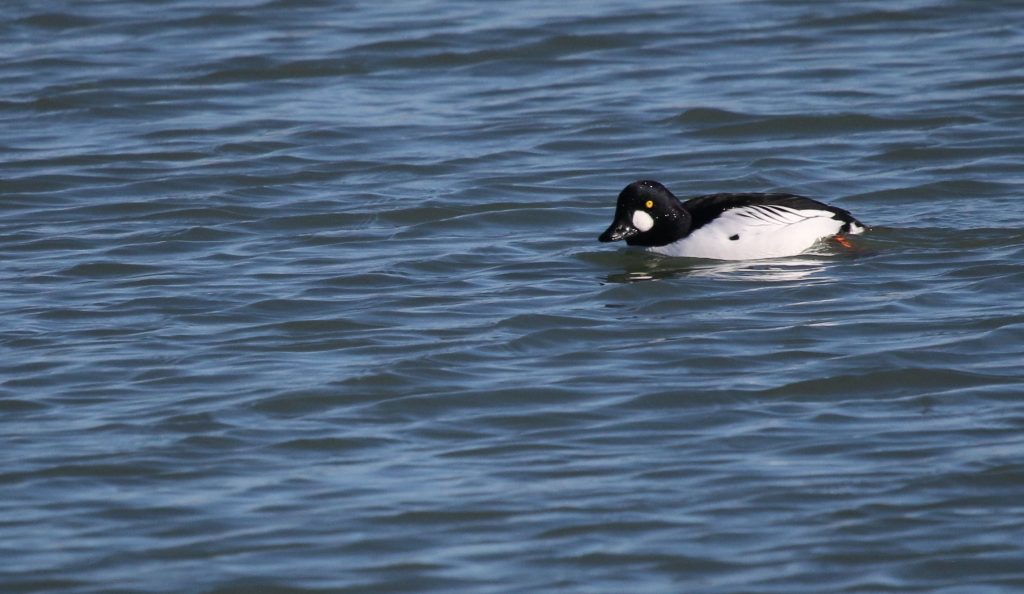 On my way home from Cobourg Harbour (one of the times) I drove some backroads by the lakeshore and found my first Barred Owl in months. I just parked my car and watched it hunt. 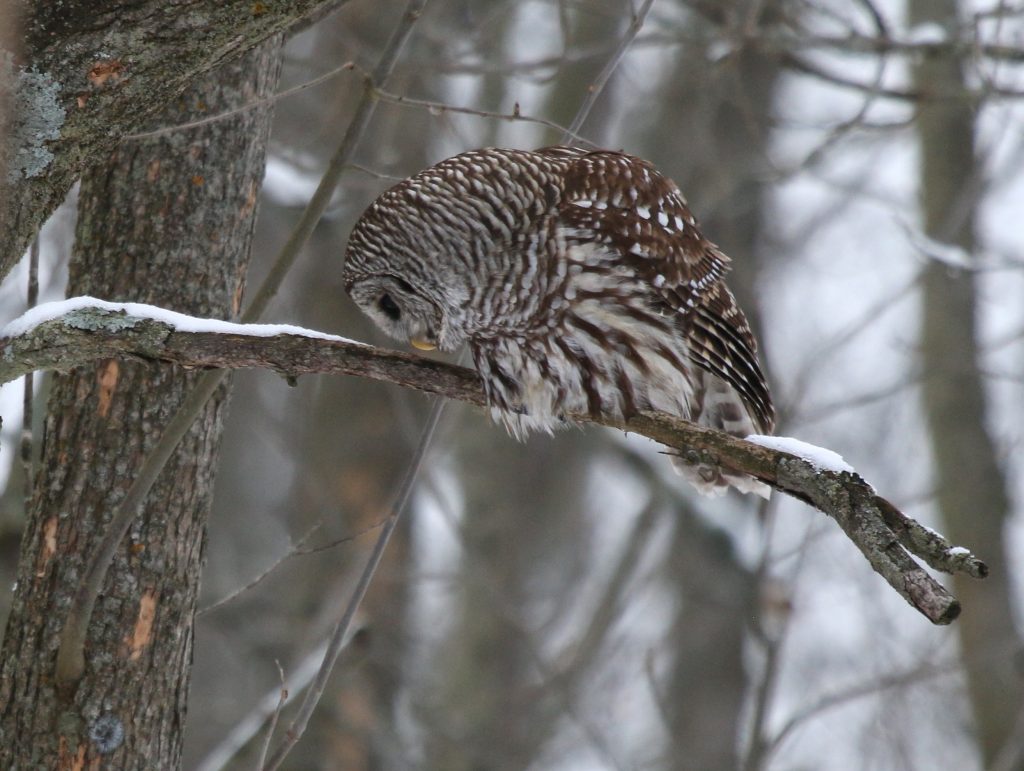 Barred Owl hunting by the lakeshore 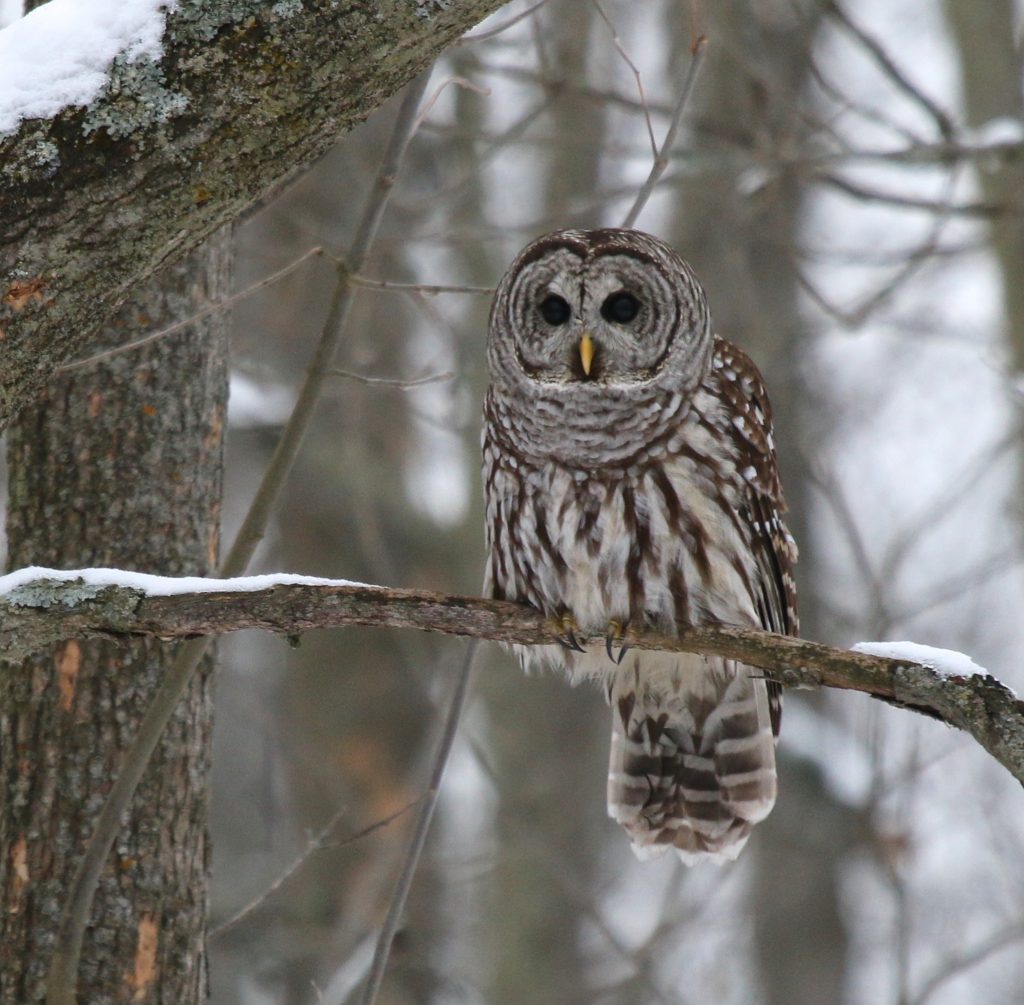 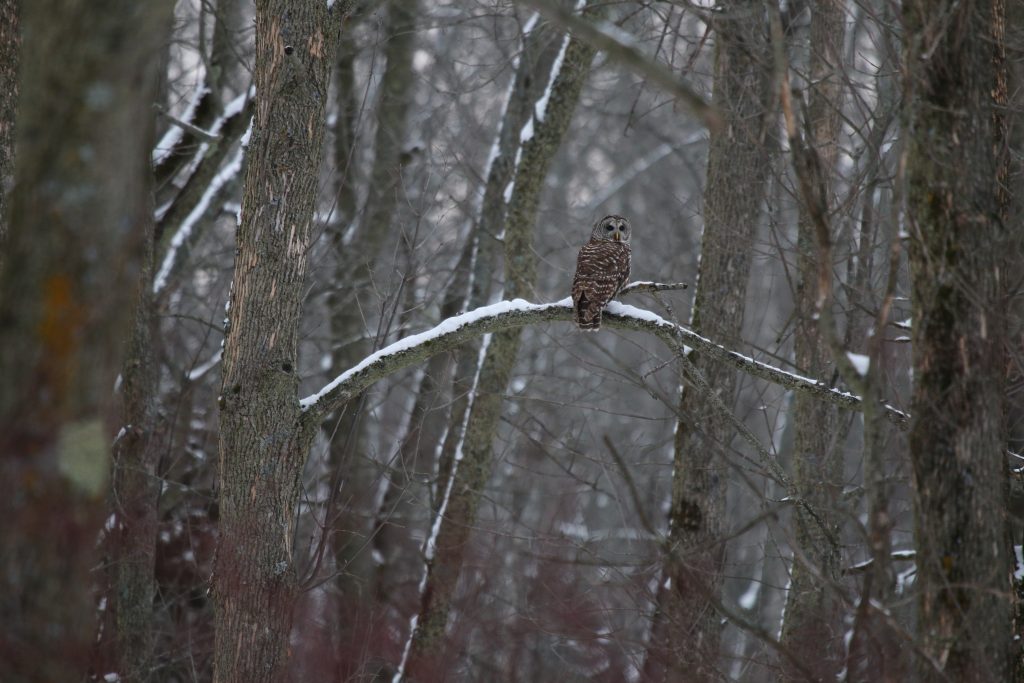 Hunting in the ash forest

I have tried to get out to Gull Island at Presqu’ile recently but my attempts have been in vain. Once I turned around because I realized I needed ice cleats. The next time I tried I wore my ice cleats but there was a man over on the island letting his dog run all over the place (!!!). Finally yesterday afternoon I was able to get over to Gull Island. It was a really dark day with a light rain/snow mix coming down. A perfect time to sneak out on my own and see what I could see. 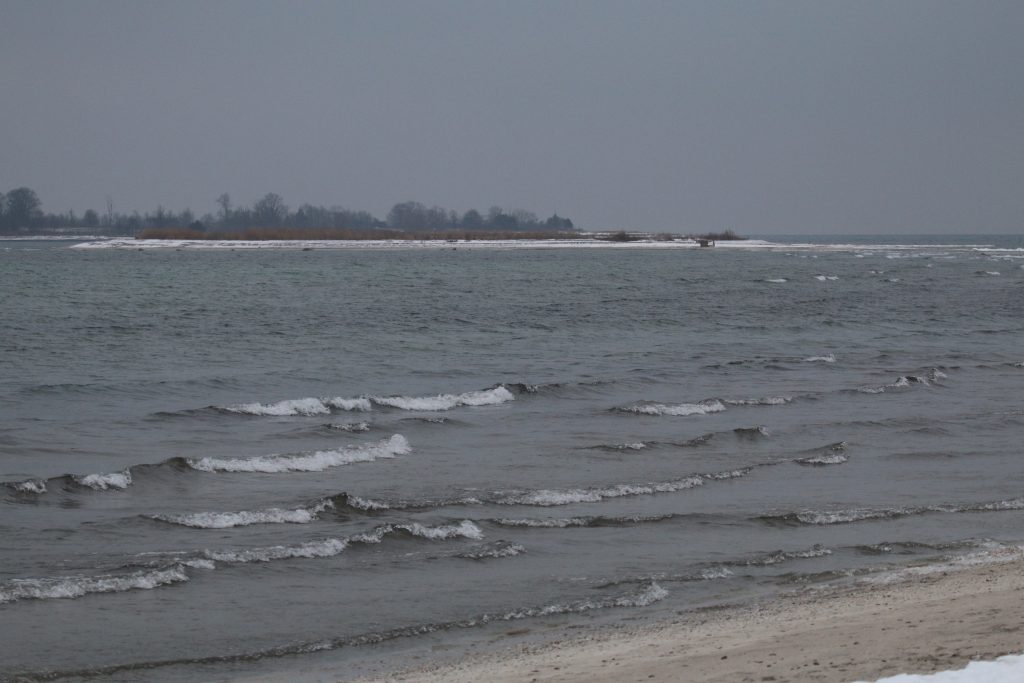 The lake is still pretty much open on the way out to Gull Island but there are big ice chunks floating around that I had to kick out of the way. The waves did splash up inside my rubber boots but I figured I had gone all that way I might as well continue. Wet feet from soakers warm up eventually. 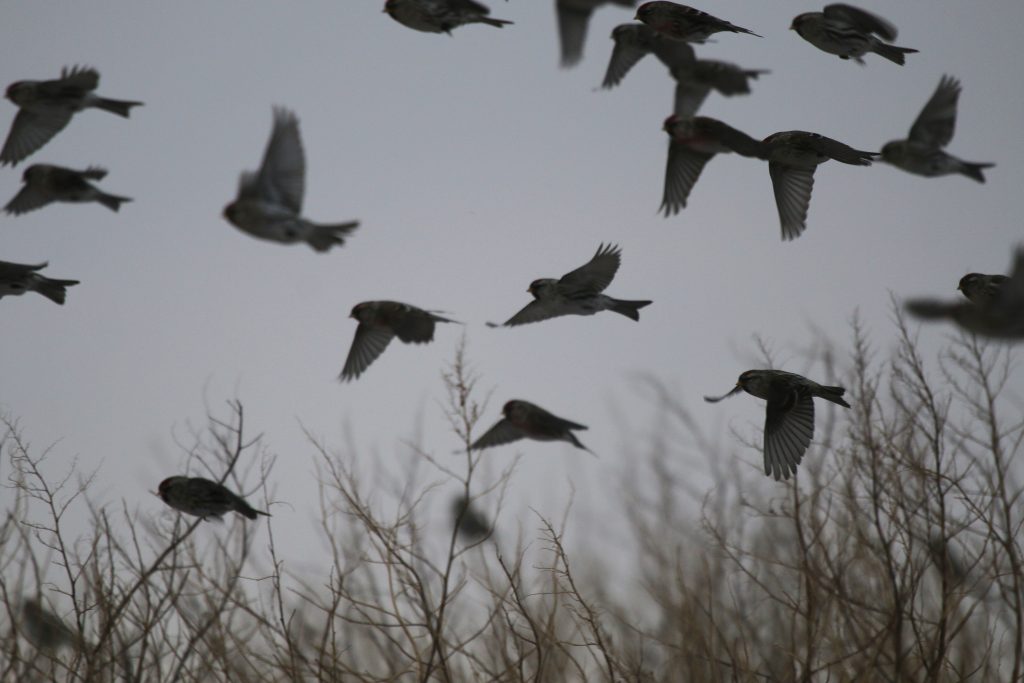 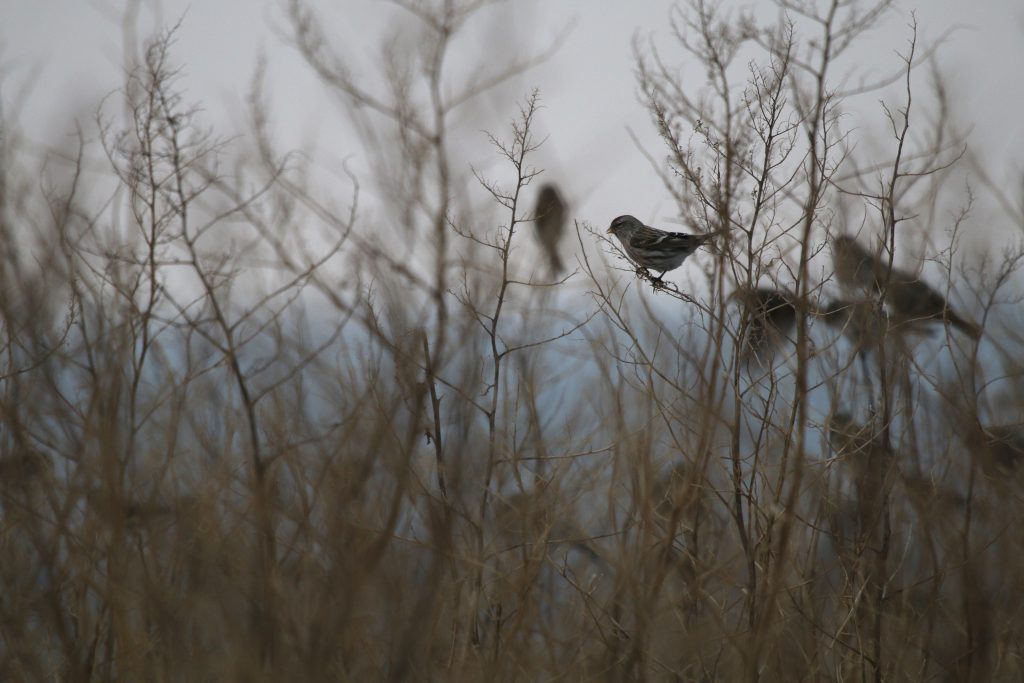 I heard a very faint chirping and found the source – a huge flock of Common Redpolls. There must have been 250 of them in the tall weeds. The flock moved around – popping up and then settling down.  I became very absorbed in watching them in their little world on this dark, wet island.

Off to my right, a white form flew out of nowhere and dove down towards the water. For a split second I got to see a Snowy Owl try to snatch a Long Tailed Duck from the water. It was so close to me and so sudden I didn’t get photos until after the fact. 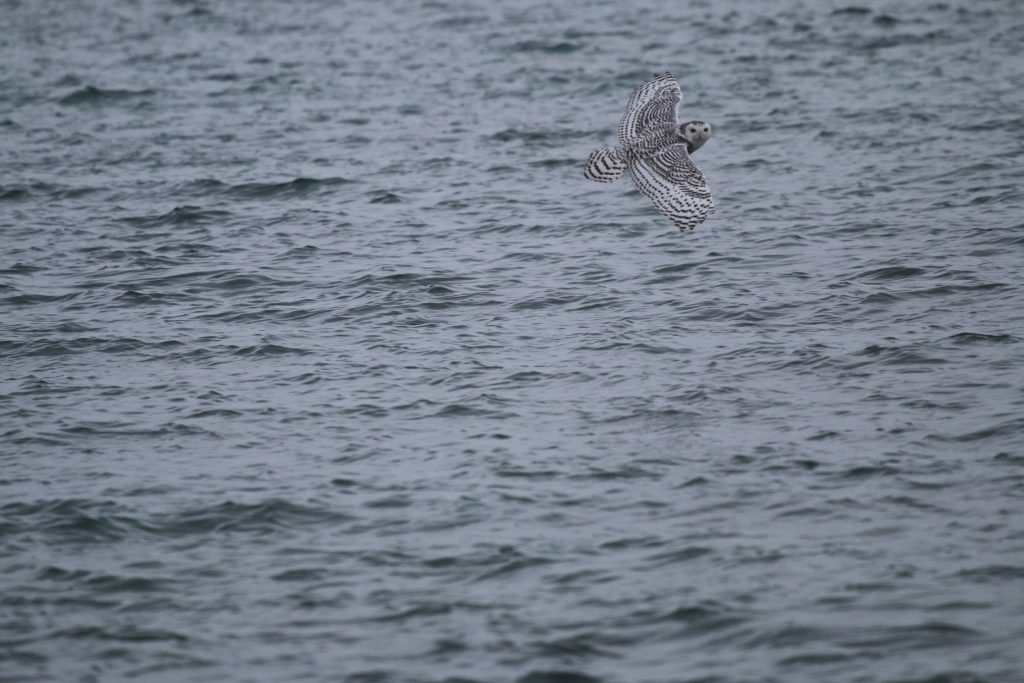 The owl soared out over the water, then came to land on the shore of the island. 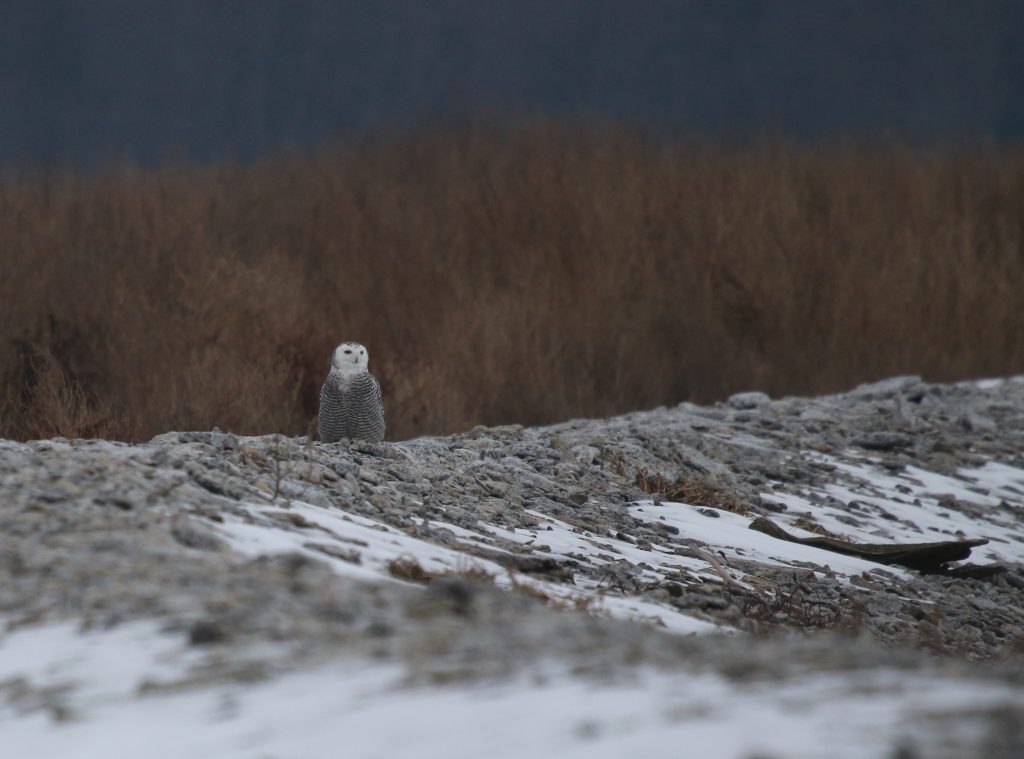 The duck was ok. For now. 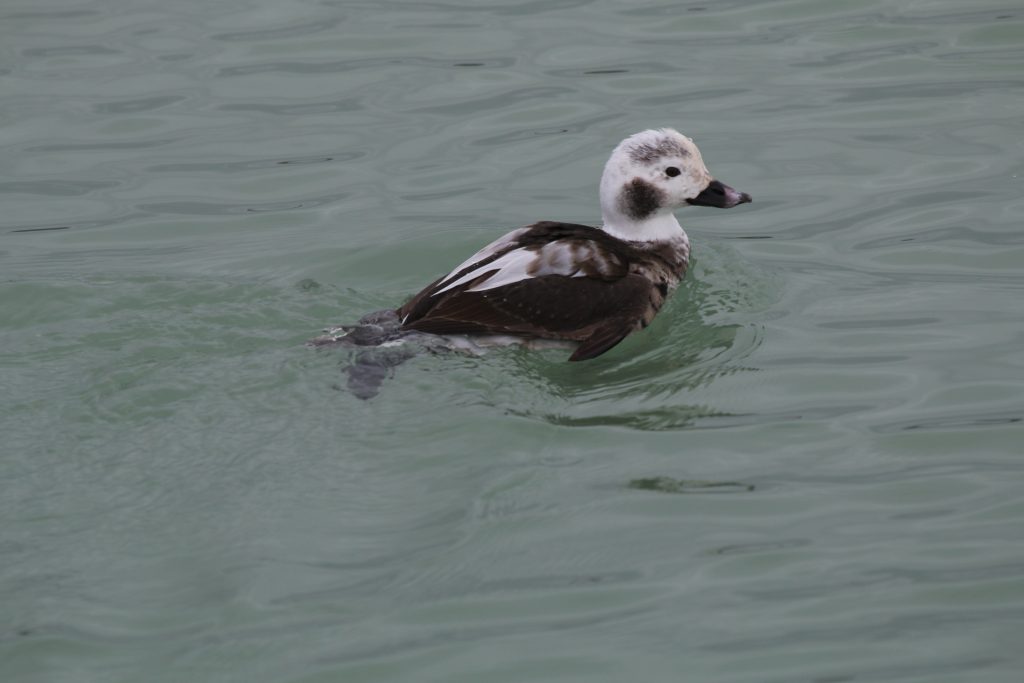 One of the reasons Snowy Owls hang around the shores of Lake Ontario in the winter is access to the abundant waterfowl. The owls will stick around by the shore and offshore islands until the lake freezes up, and then they will move further out onto the lake and ride around on the ice floes, hunting waterfowl in the cracks and channels between the ice. 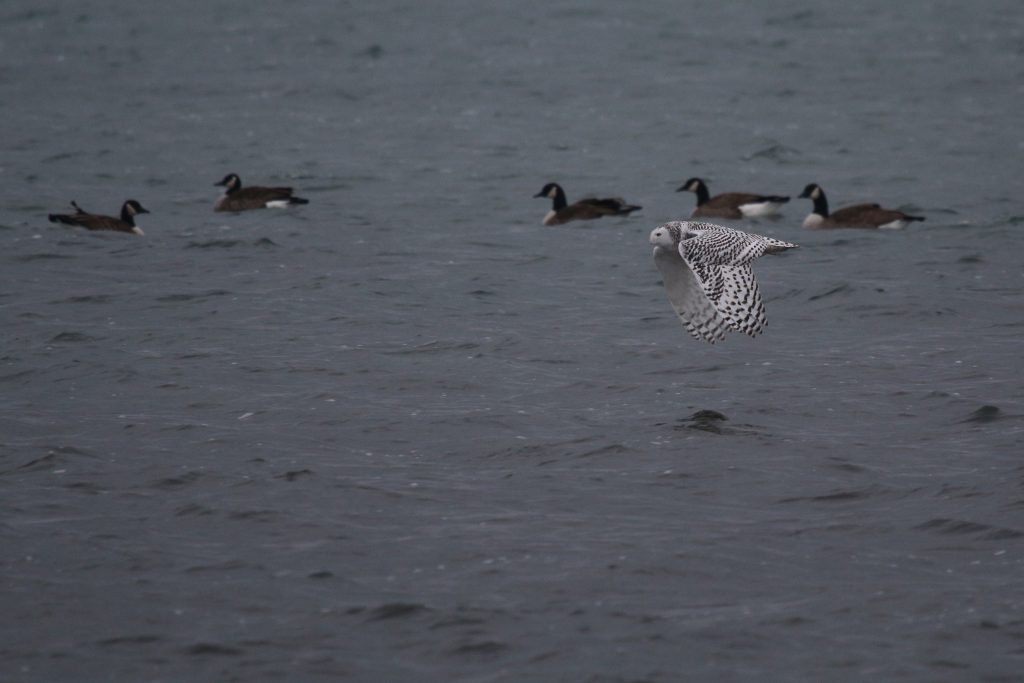 Snowy Owl checking out the waterfowl

For now, this Snowy Owl is spending most of its time on the offshore islands by Presqu’ile Park, where it has access to the rodents as well as abundant waterfowl. 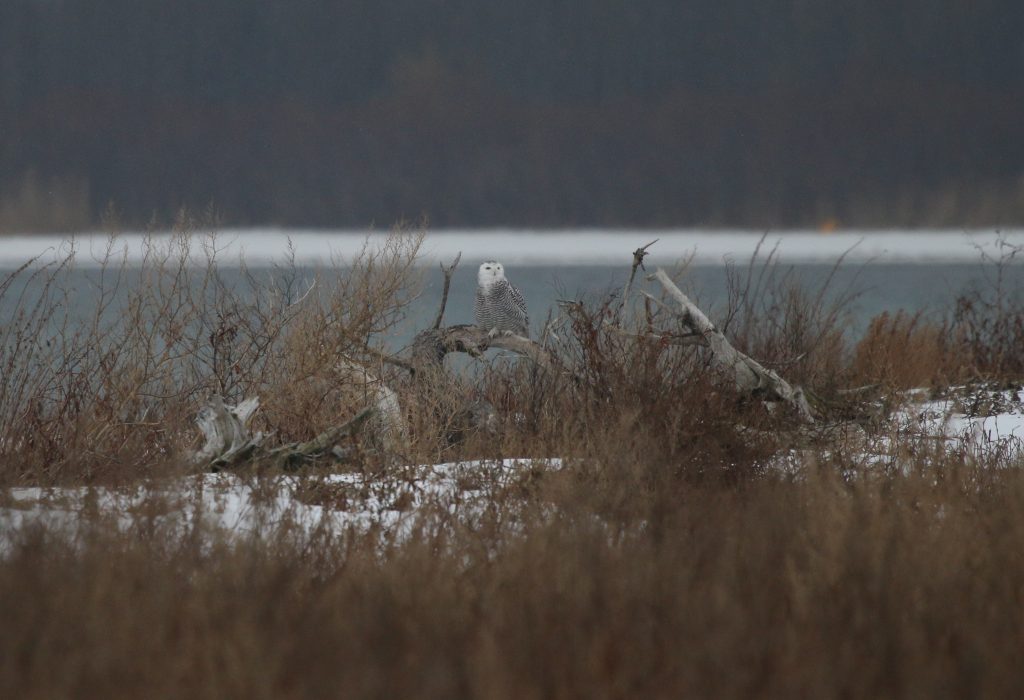 One of my favourite scenes

I left the owl perched on a very scenic piece of driftwood and headed back to shore through the ice chunks and waves. A few Herring Gulls circled in the air overhead and called out, but otherwise the beach was quiet.

Sometimes people ask me how I find all this awesome wildlife, and the answer is – I go out looking for it. Lots of times I don’t find what I set out to look for – like in the case of the elusive Greater White Fronted Goose. Sometimes I don’t see anything at all. But what makes it all worthwhile are the moments when I am surprised by something I did not even anticipate – like the Barred Owl at the side of the road by the lakeshore, or the Snowy Owl hunting over the lake so close I couldn’t even take a photo.

Next blog I will tell you about some otters I have found! All the best. Leslie