If I’m not around home,  you can be pretty sure I have gone down to Presqu’ile.

Presqu’ile Provincial Park is located south of Brighton, Ontario, Canada.   Birding there is spectacular, because Presqu’ile lies in a major migratory bird route, and has a variety of habitats such as forest, marsh, fields, beaches, and islands.

There are wonderful things to see in the park no matter what time of year, but here’s what Presqu’ile has to offer in August. 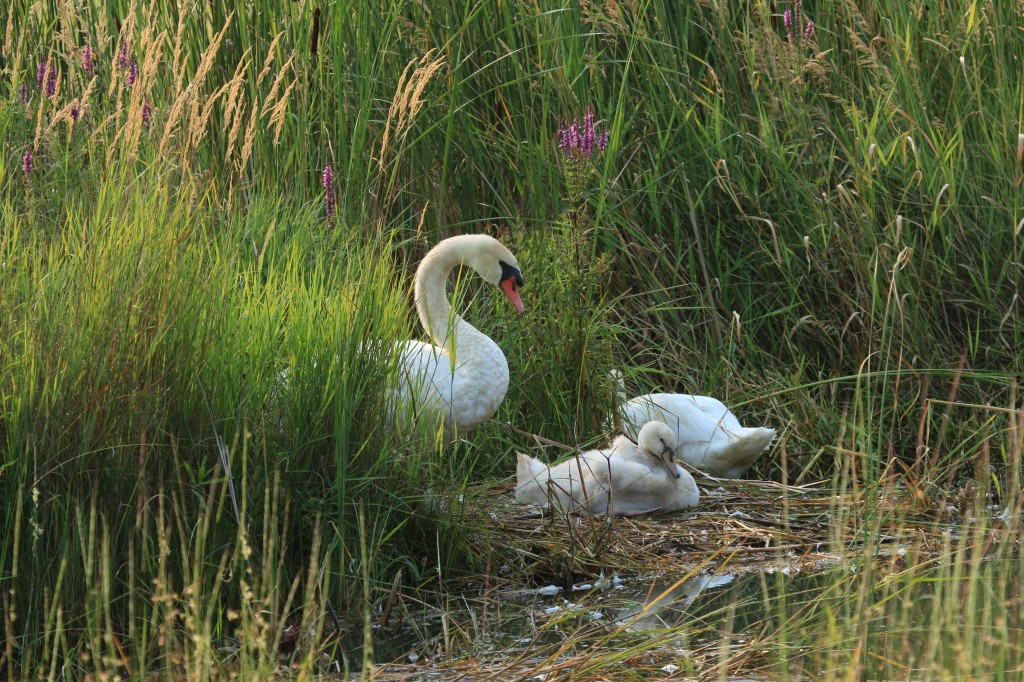 Many birds breed in Presqu’ile Park, and it’s not unusual to find a variety of birds raising their families in the summertime.

A walk on  the marsh boardwalk will allow you to see a number of birds and their babies, such as this Mute Swan family. 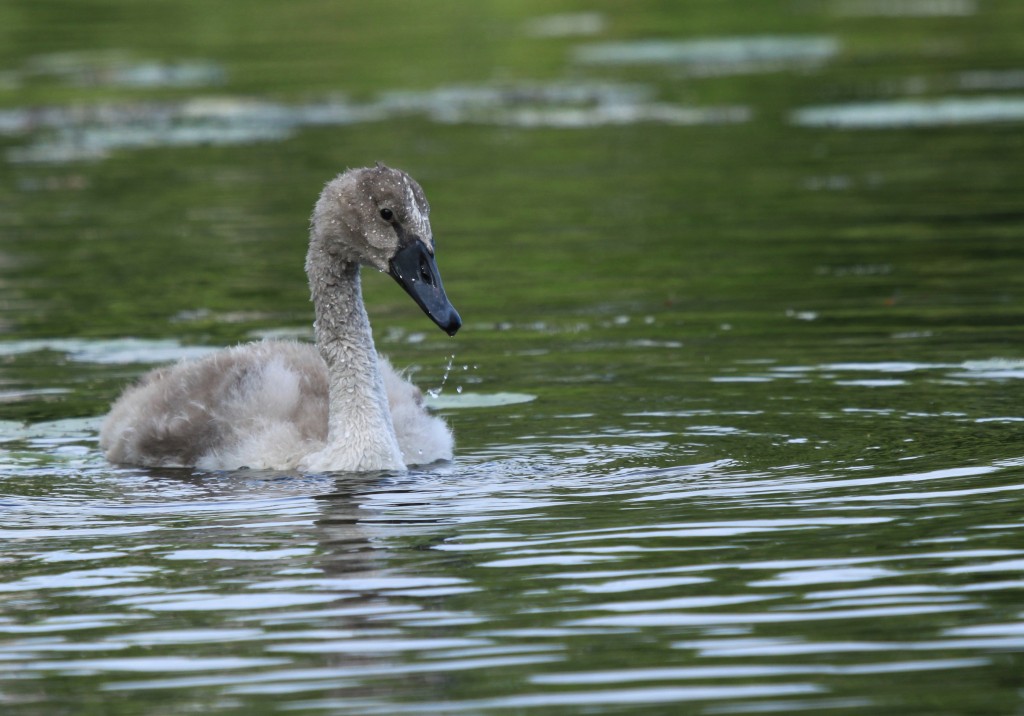 The Ugly Duckling was really a Beautiful Swan

Eastern Kingbird families can be found all over the park in August, with the young birds chasing their parents screeching for food.  Kingbirds are fascinating to watch as they perch on an exposed branch, then swoop out for insects.  I caught this young Kingbird sitting still for a second! 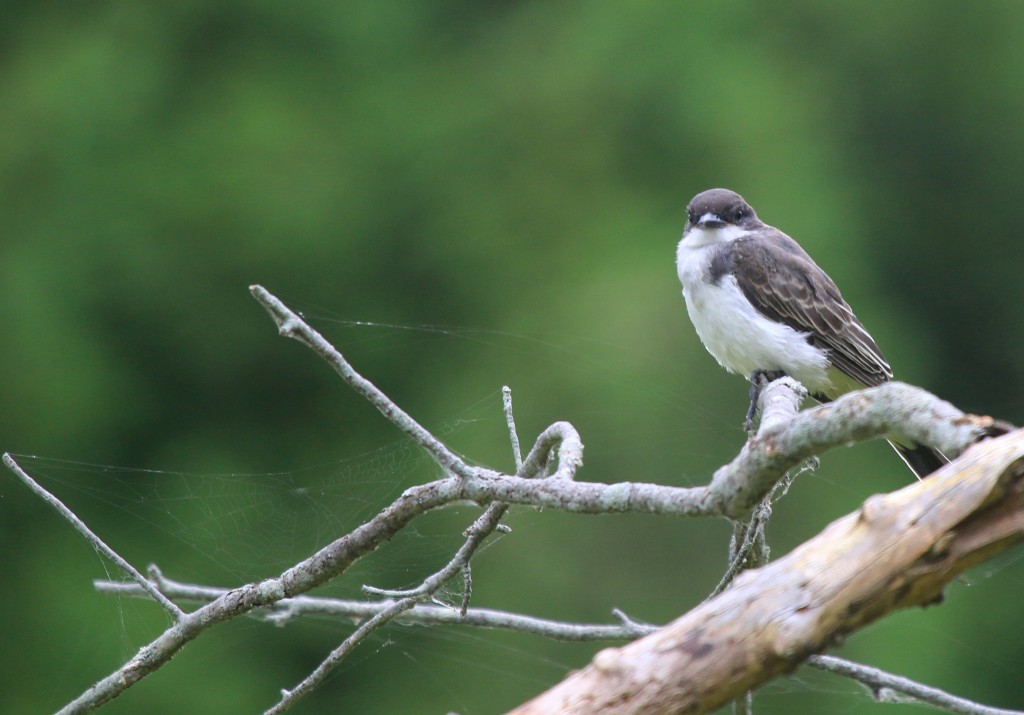 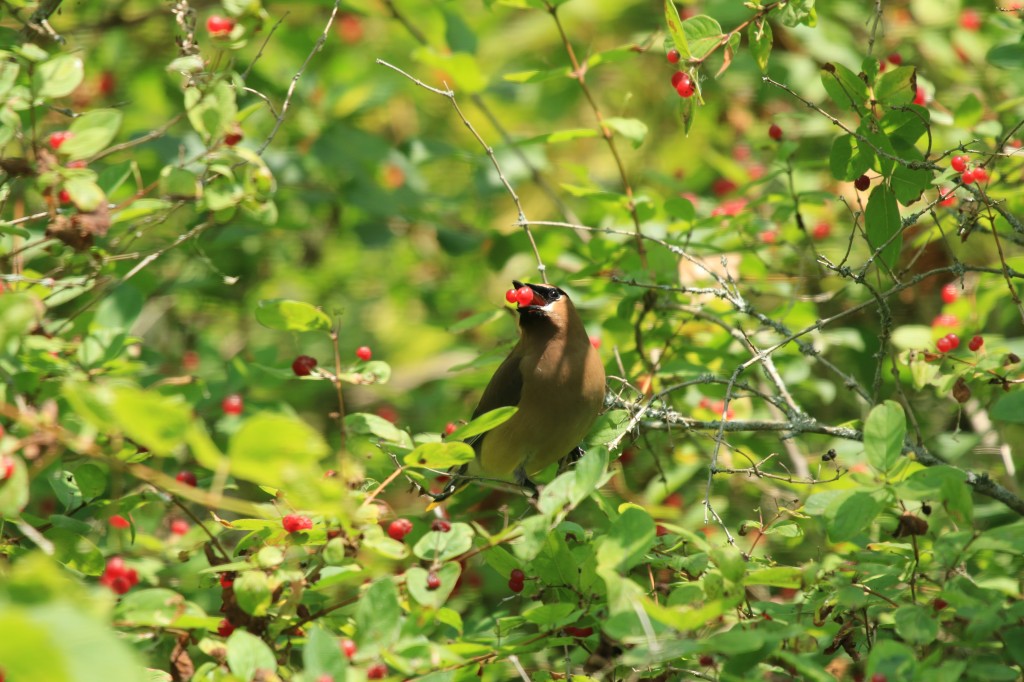 If you like Cedar Waxwings, Presqu’ile is the place to be.   Flocks of them are everywhere!   They easily can be found eating berries from bushes.   Yesterday I also found a flock with a large group of young birds, begging for food.   They can eat by themselves, but that does not stop them from begging. 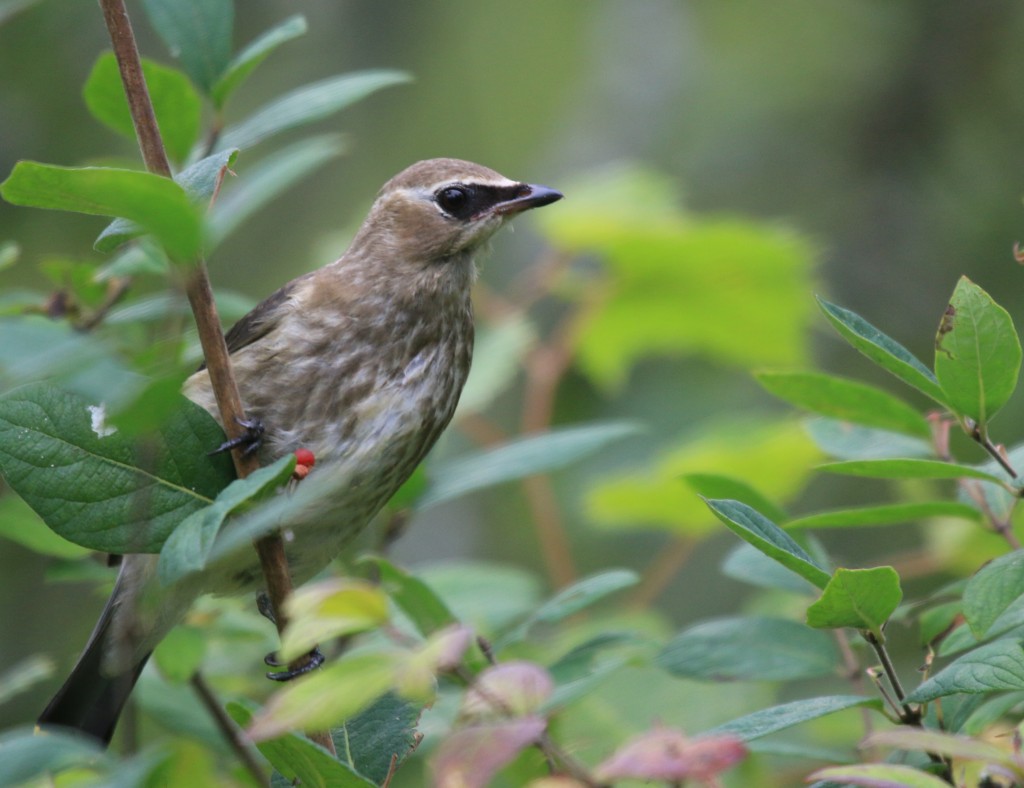 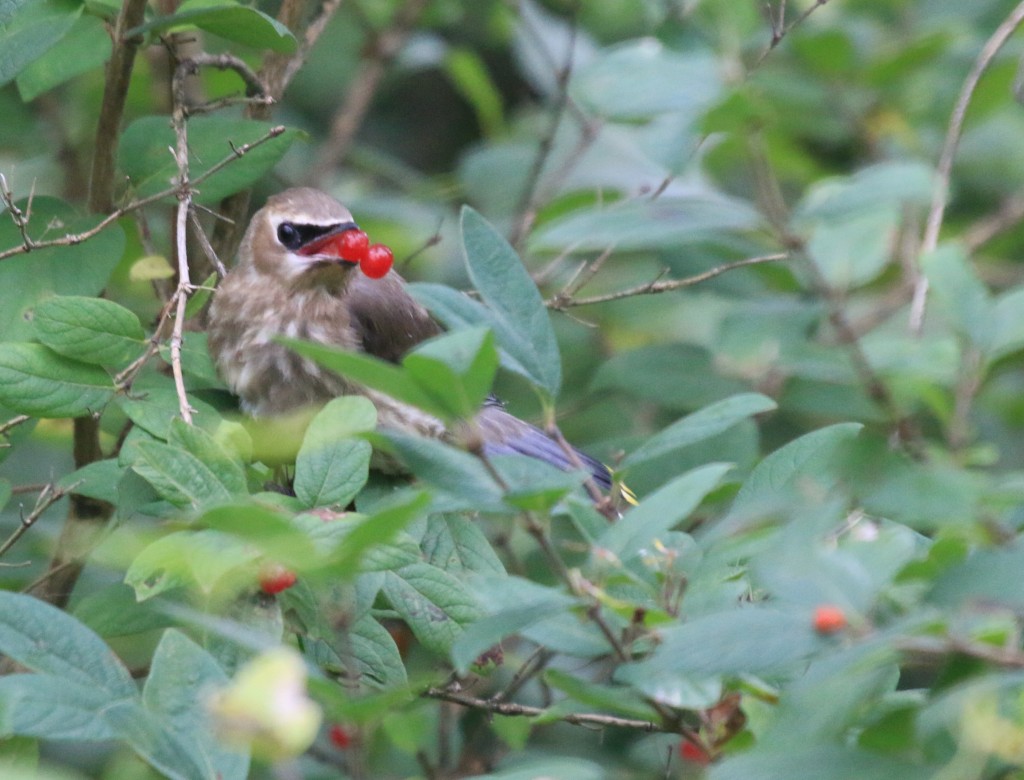 Two berries may not be enough!

Presqu’ile may be most famous for its shorebird migrations.  Migratory shorebirds are true wonders of the natural world. Each year, they undertake grueling migrations from their wintering grounds in South America to their breeding grounds in the Canadian Arctic, and back again. 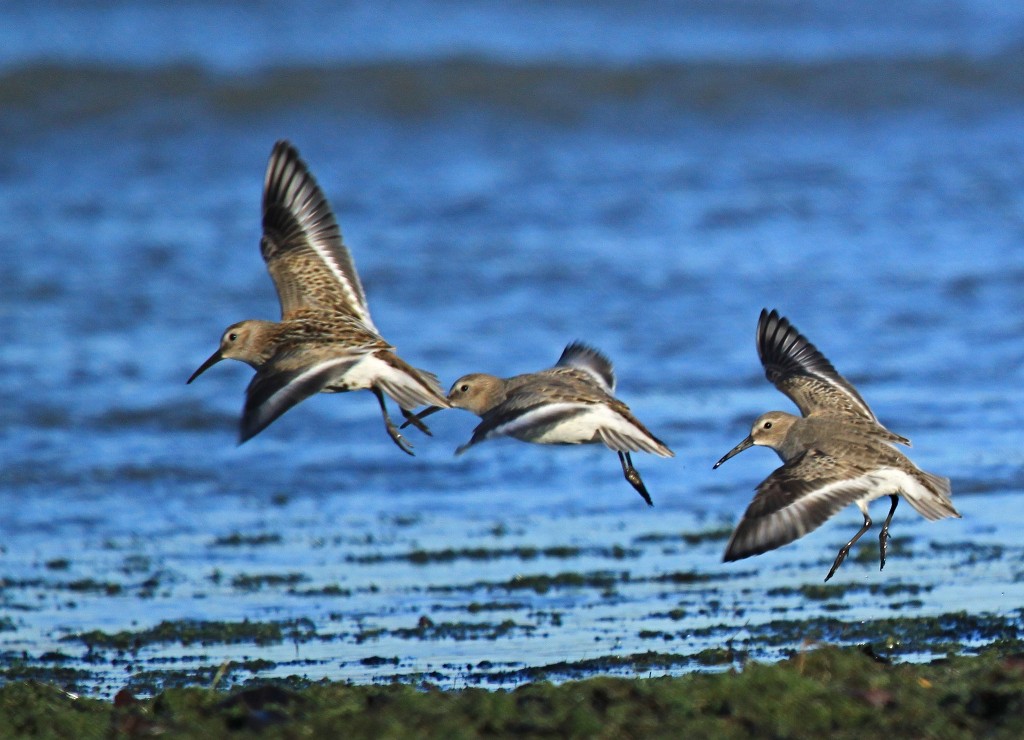 Along the way, they stop at various staging points to rest and refuel.  Presqu’ile is one of these important staging areas.  At any given time in late summer into autumn, you can see dozens, hundreds, or even thousands of shorebirds feeding along the beaches.

Last week, a couple of days of windy weather washed up huge piles of algae onto the beaches at Presqu’ile.   Not so great for swimming, but great for the shorebirds. This mat of decaying algae is full of fly (Diptera) larvae which shorebirds find irresistible.  Eat up! 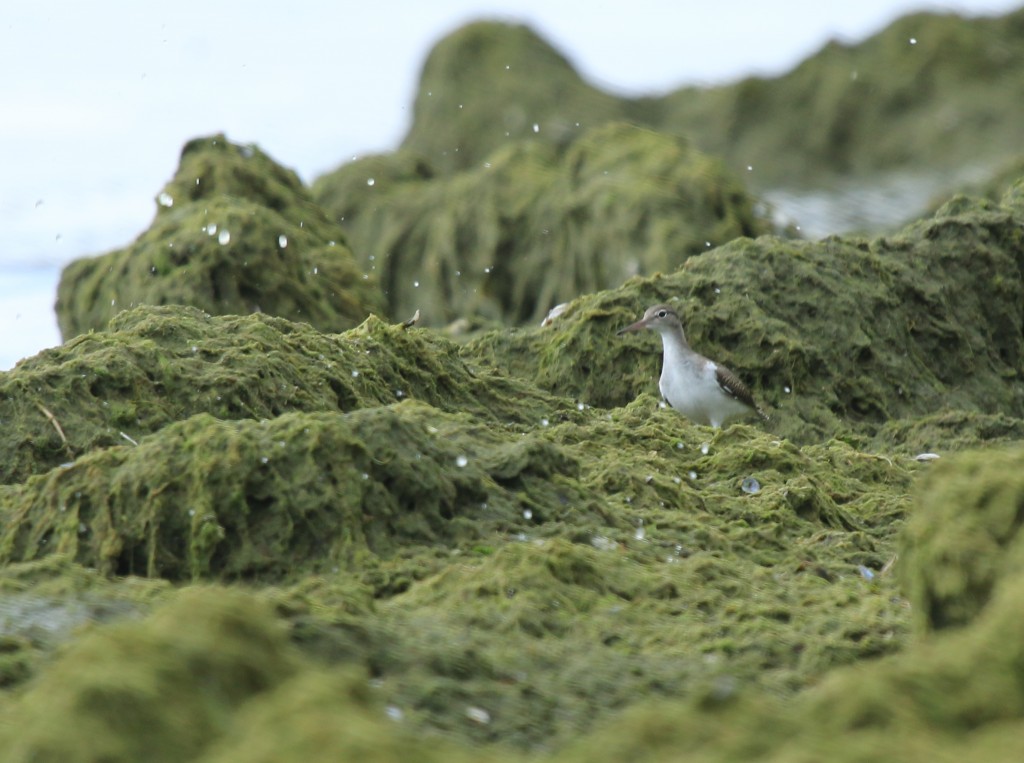 Windy day at the beach 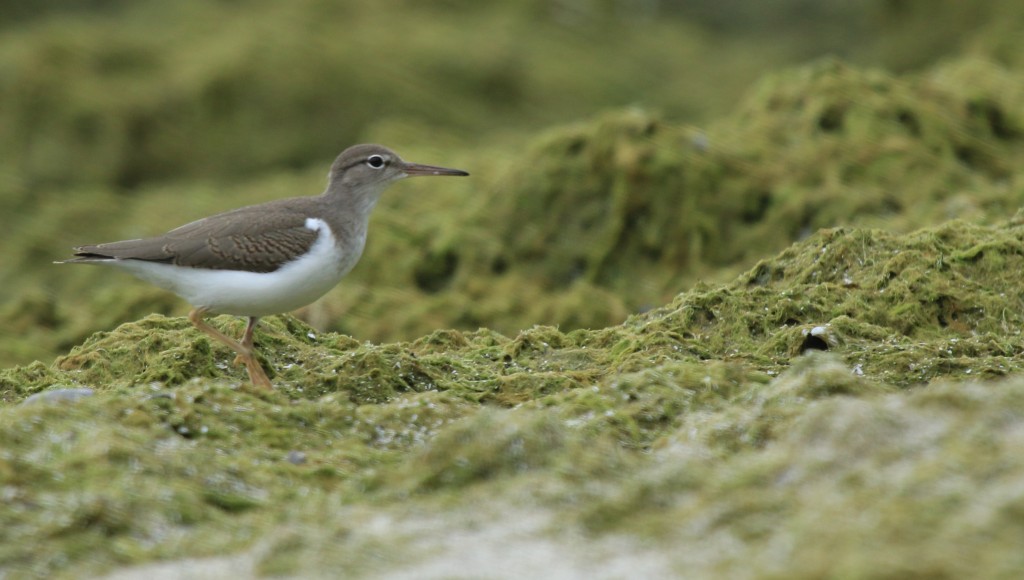 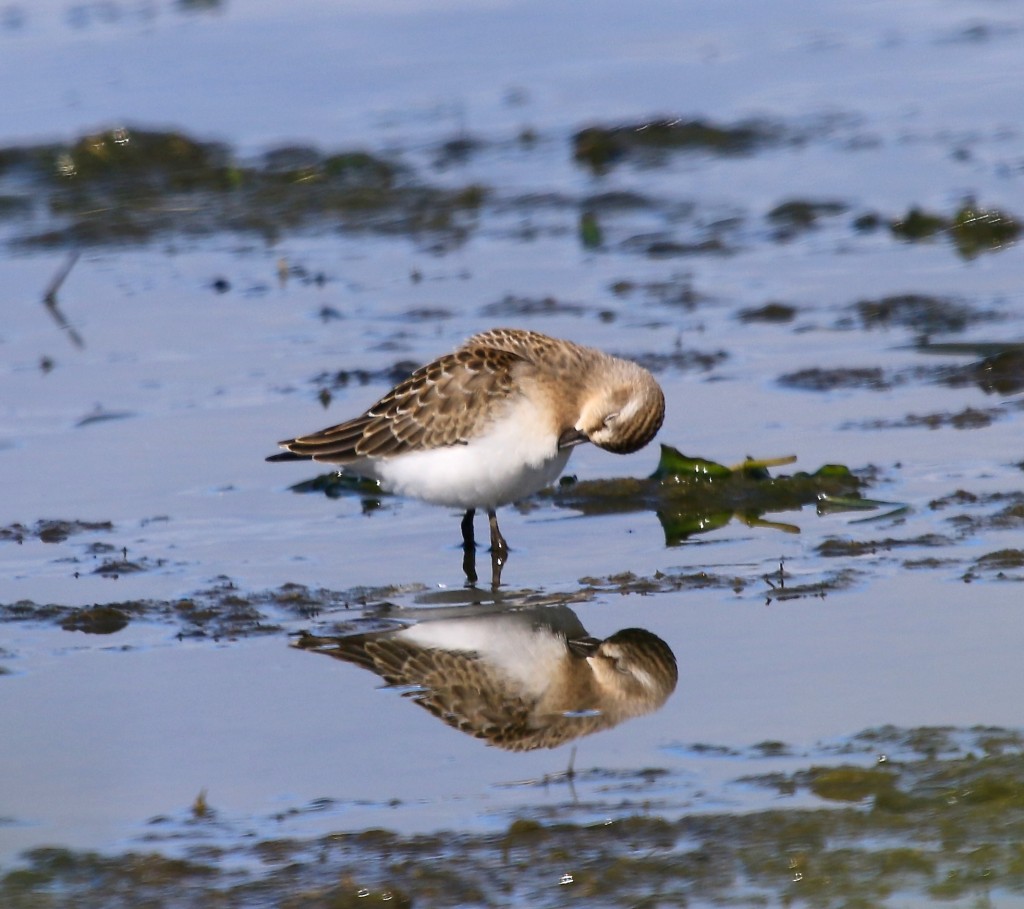 I am still learning how to identify shorebirds.   Many of them are very small, and have very subtle differences in markings.   For example, there is a Greater Yellowlegs and a Lesser Yellowlegs.  Virtually identical, except the Lesser Yellowlegs is smaller.   So…if I am only seeing one bird, then what? 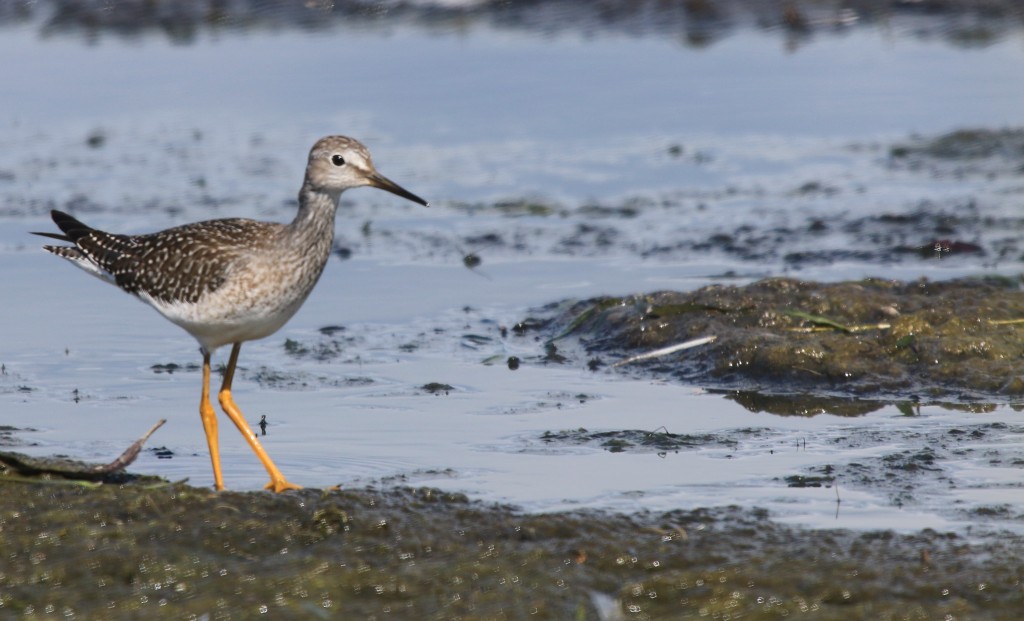 Lesser Yellowlegs it is… 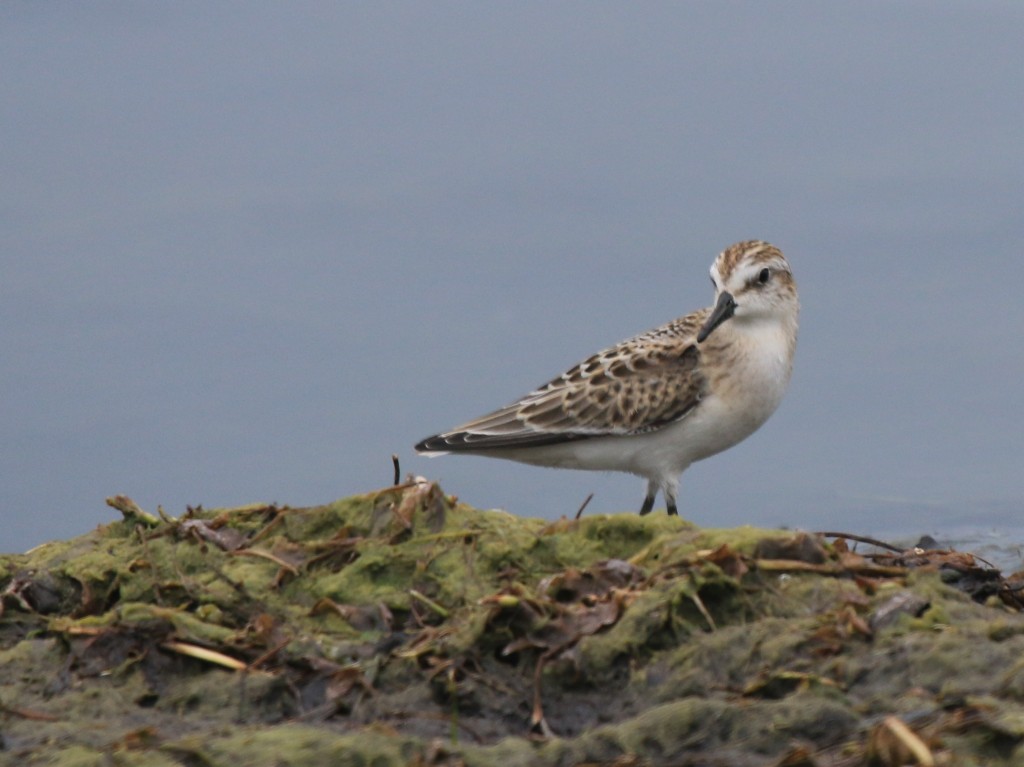 The best place to look for shorebirds is at Owen Point.   A trail of less than 1 km will take you to a viewing area where you can get up close and personal with the birds.   They are so busy feeding they don’t pay much attention to humans.  Of course the normal rules for success apply- be still, and be quiet. 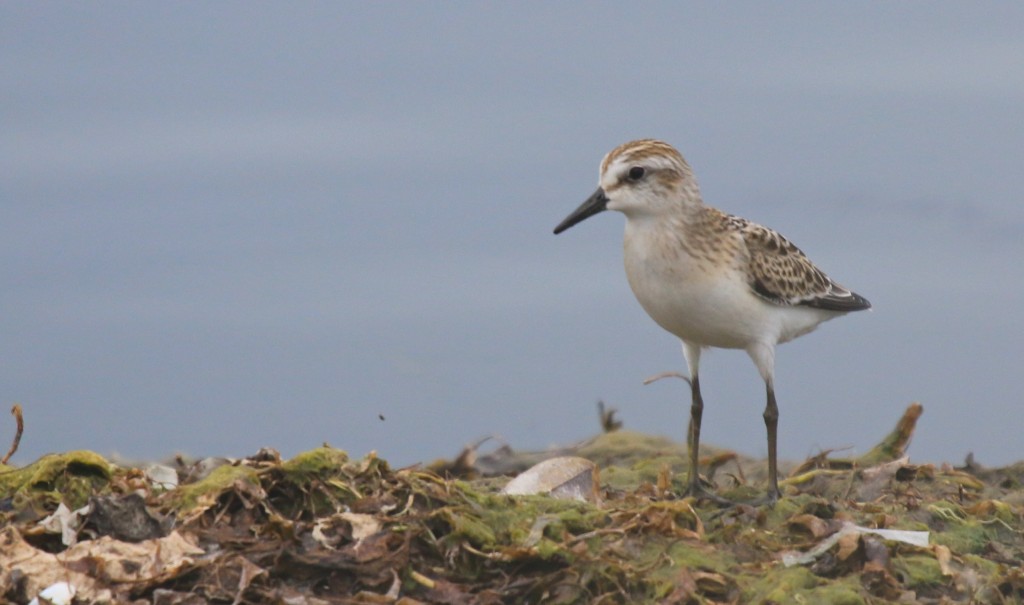 Sandpipers are also known as “Peeps” It’s the noise they make. 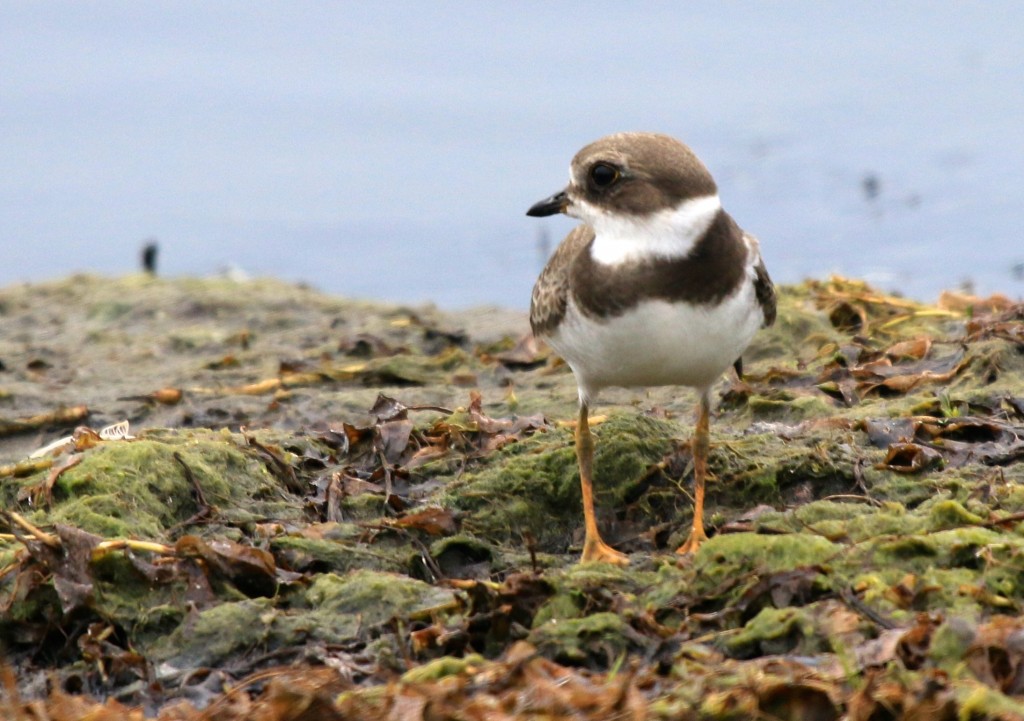 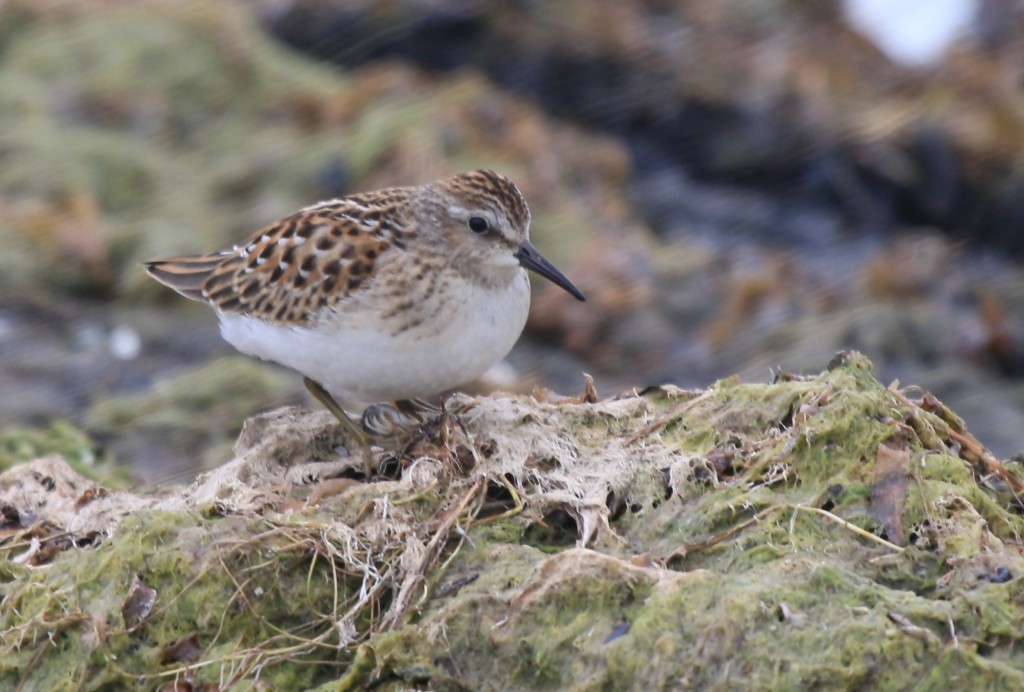 Sandpiper Having a Beach Buffet

So, Presqu’ile in August is a place to go to really appreciate nature’s marvels, from the busy activity of birds raising their families, to the appearance of travelling shorebirds. The shorebird migration will continue on at least into November, with various species making their appearances.

I, for one, plan on going back. 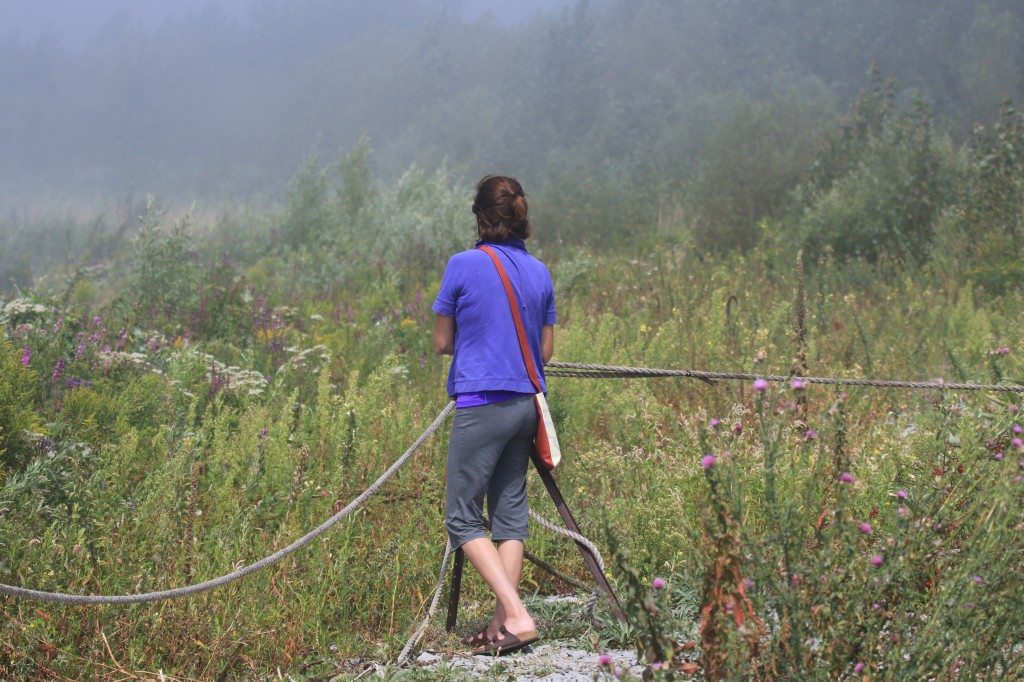 For weekly reports on what birds have been seen at the park, see Fred Helleiner’s Presqu’ile Birding Report, published each Thursday evening.