This summer I received an education. 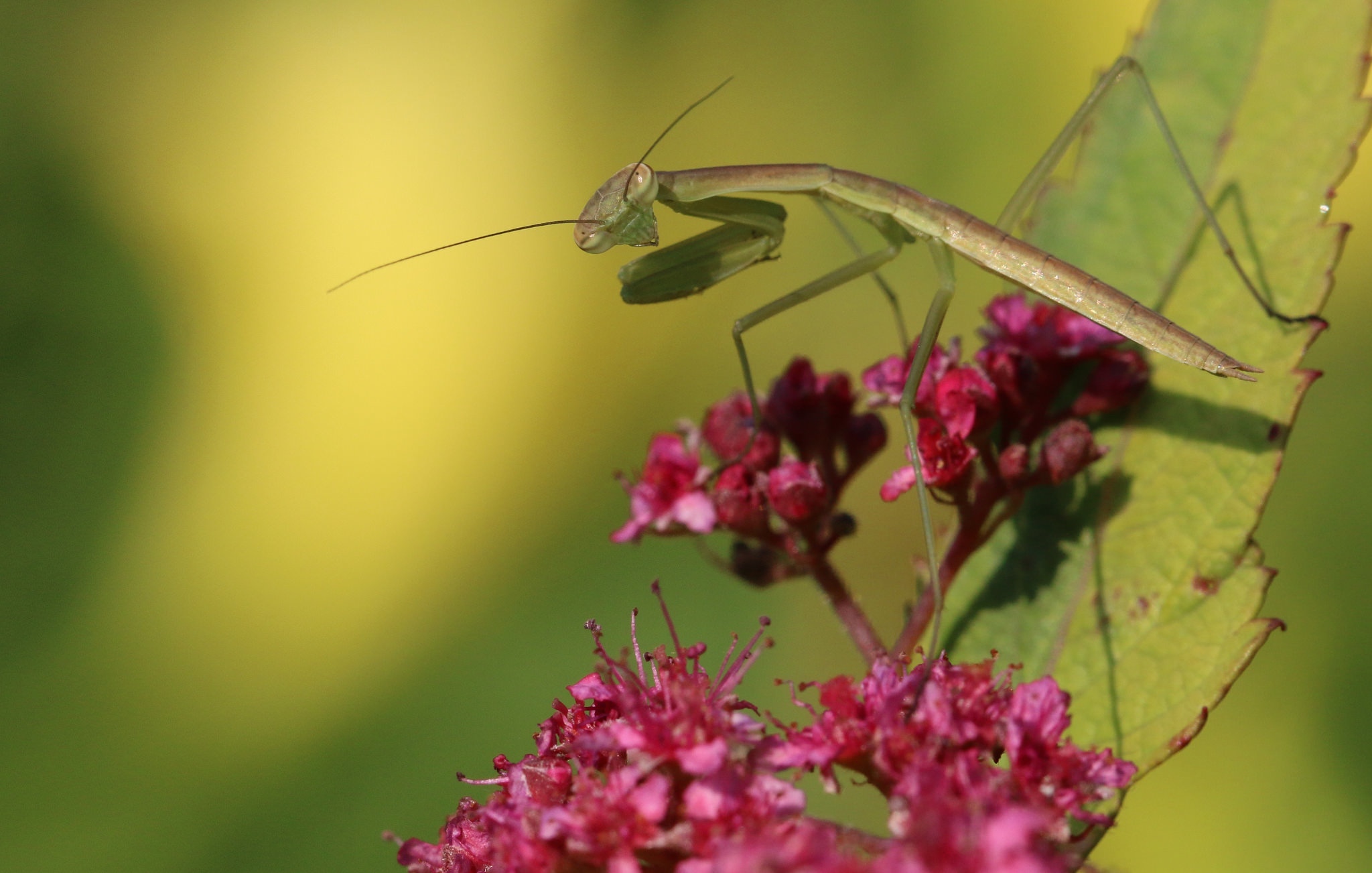 A random purchase of a praying mantis egg case at our local garden centre led to a fascinating summer sharing my garden with a family of praying mantids. 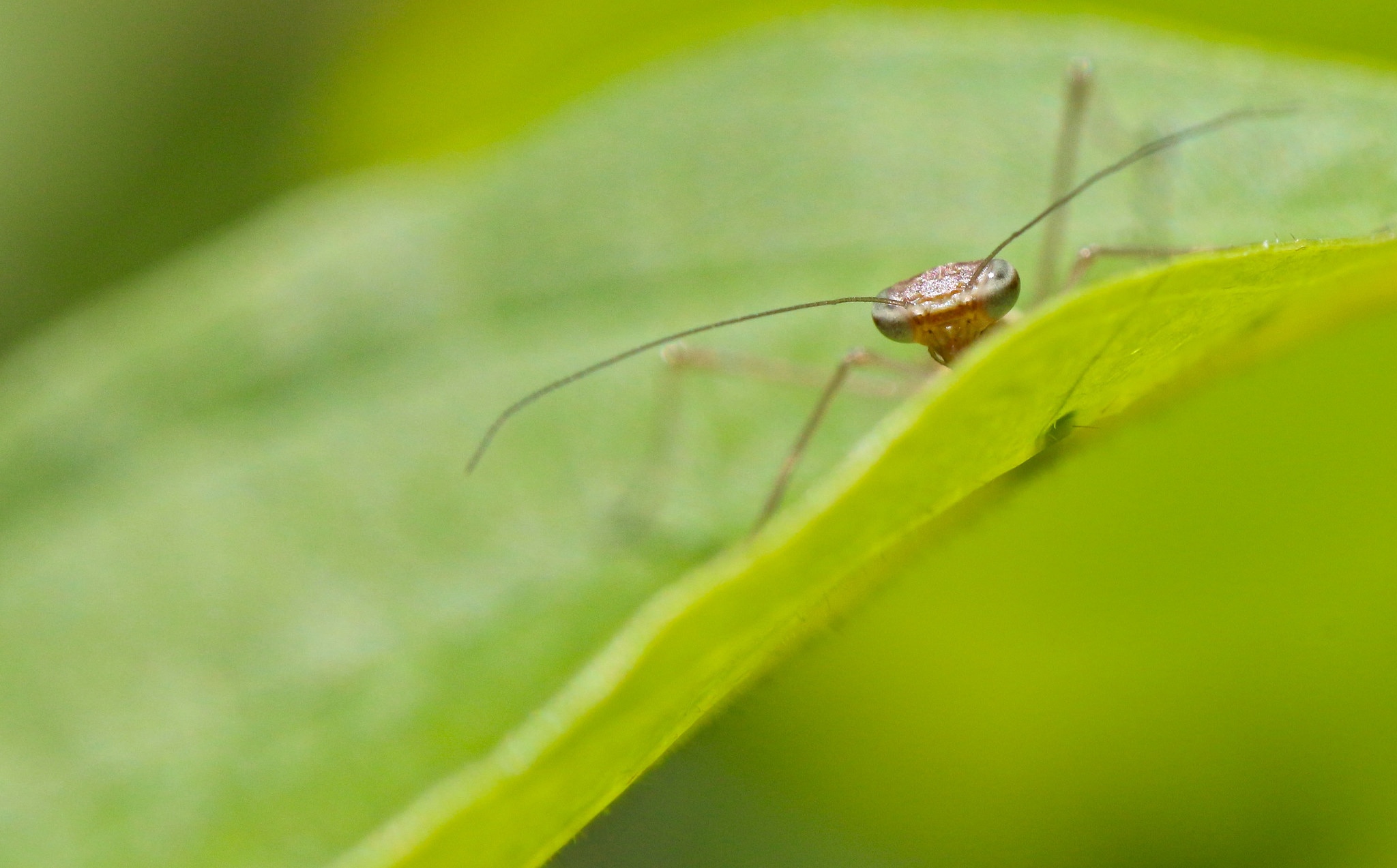 When these little predators emerged by the dozens from their egg case in early summer, they were about the same length as a pinky fingernail. 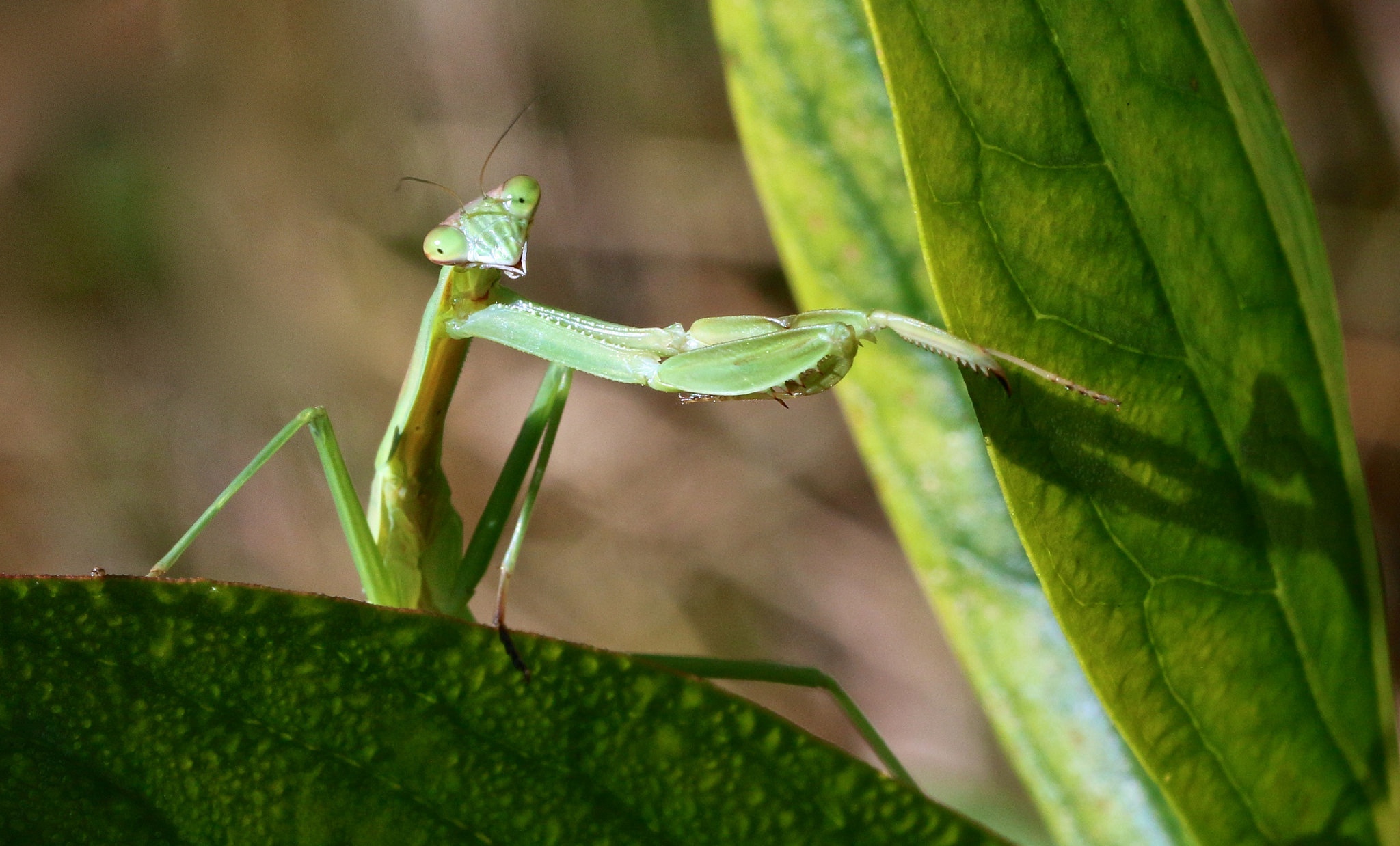 Insanely photogenic, they became the main subject of my photography.   Along the way, I learned more and more about the lives of these formidable hunters. 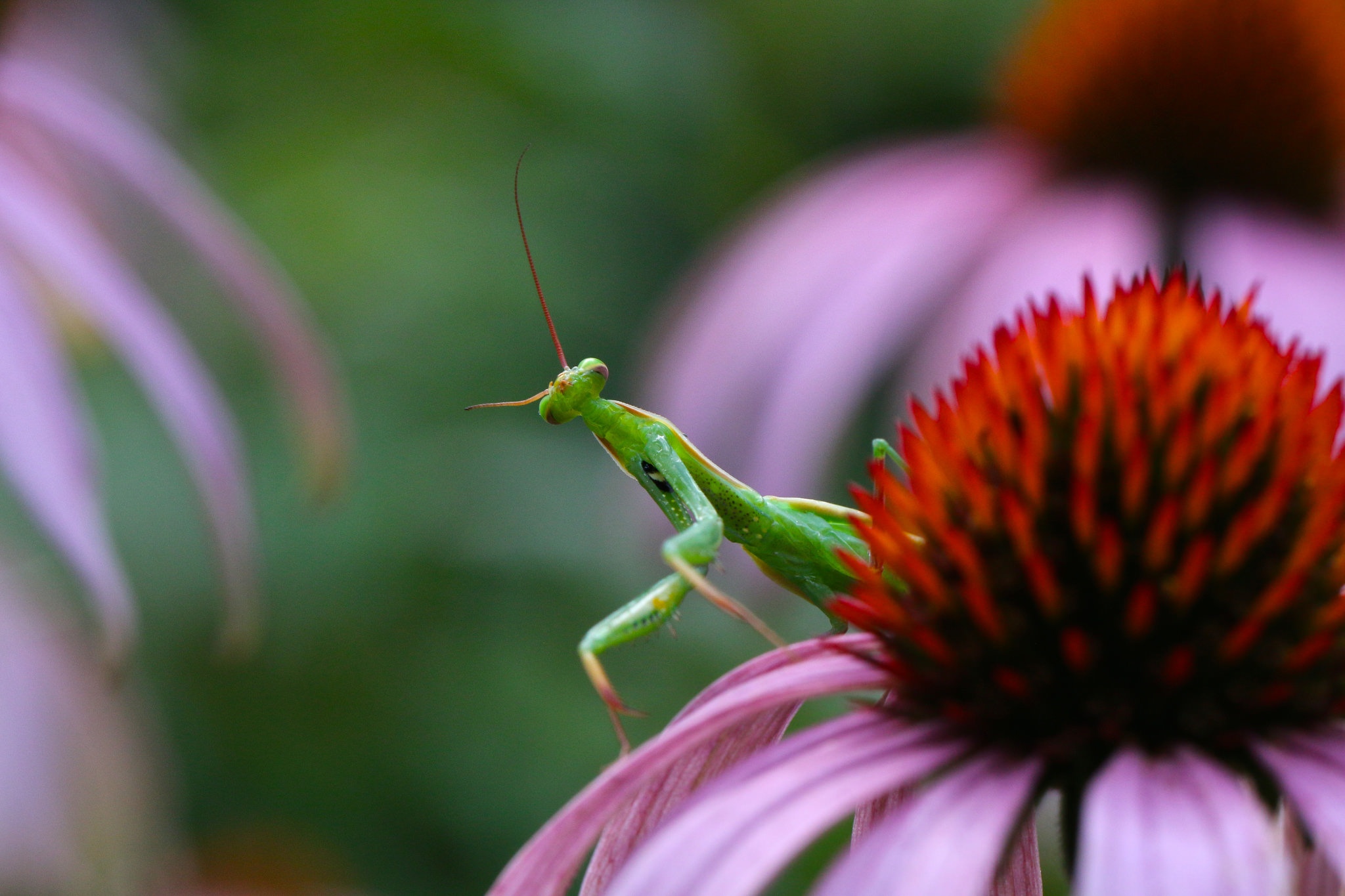 Did you know that we have no native species of praying mantis in our part of the world?   The ones we see are either European mantids or Chinese mantids.     The European mantids (above photo) have smooth faces and a very distinctive black and white mark in their armpit.   When their arms are outstretched, these marks look like big eyes and can be used as a threat display. 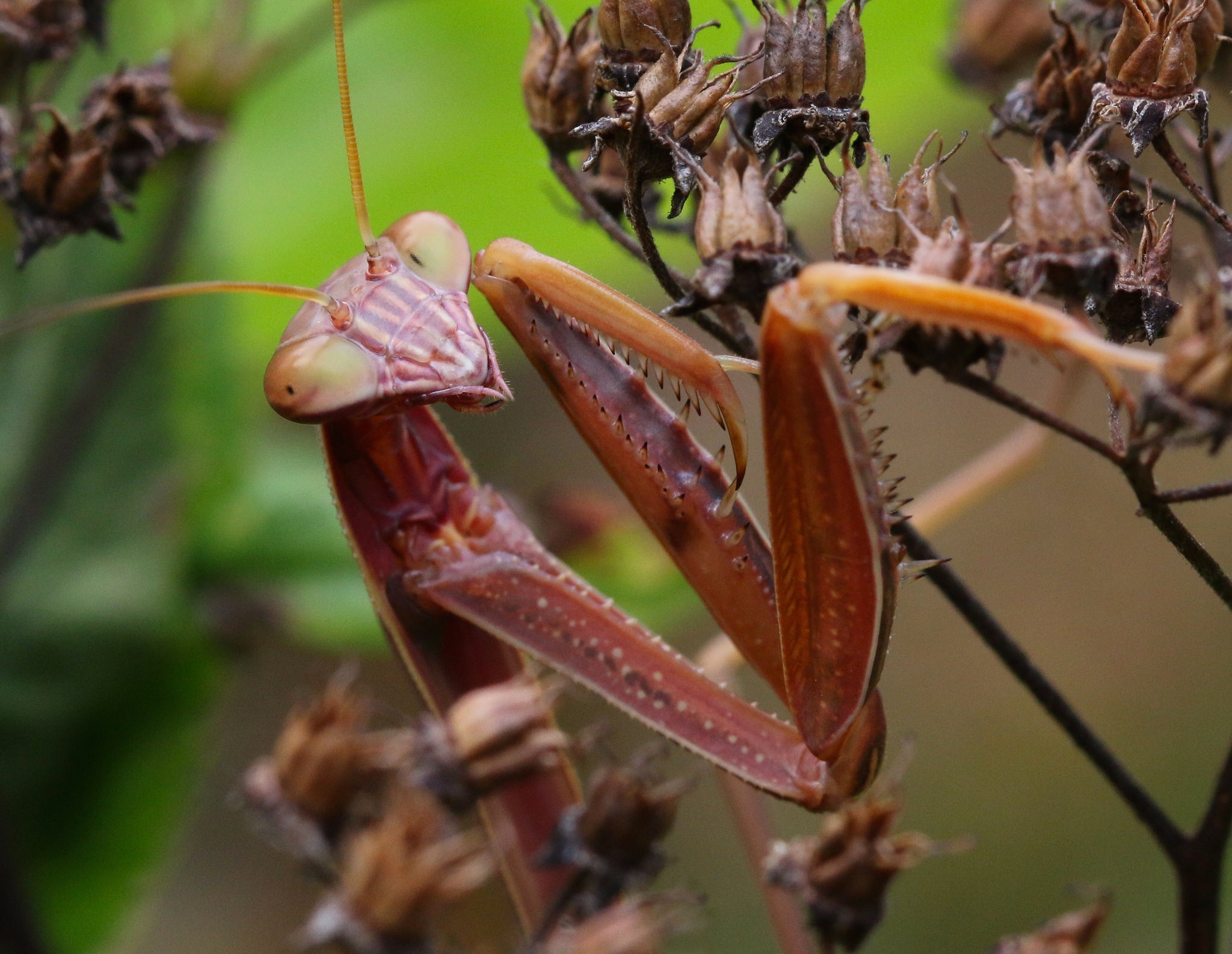 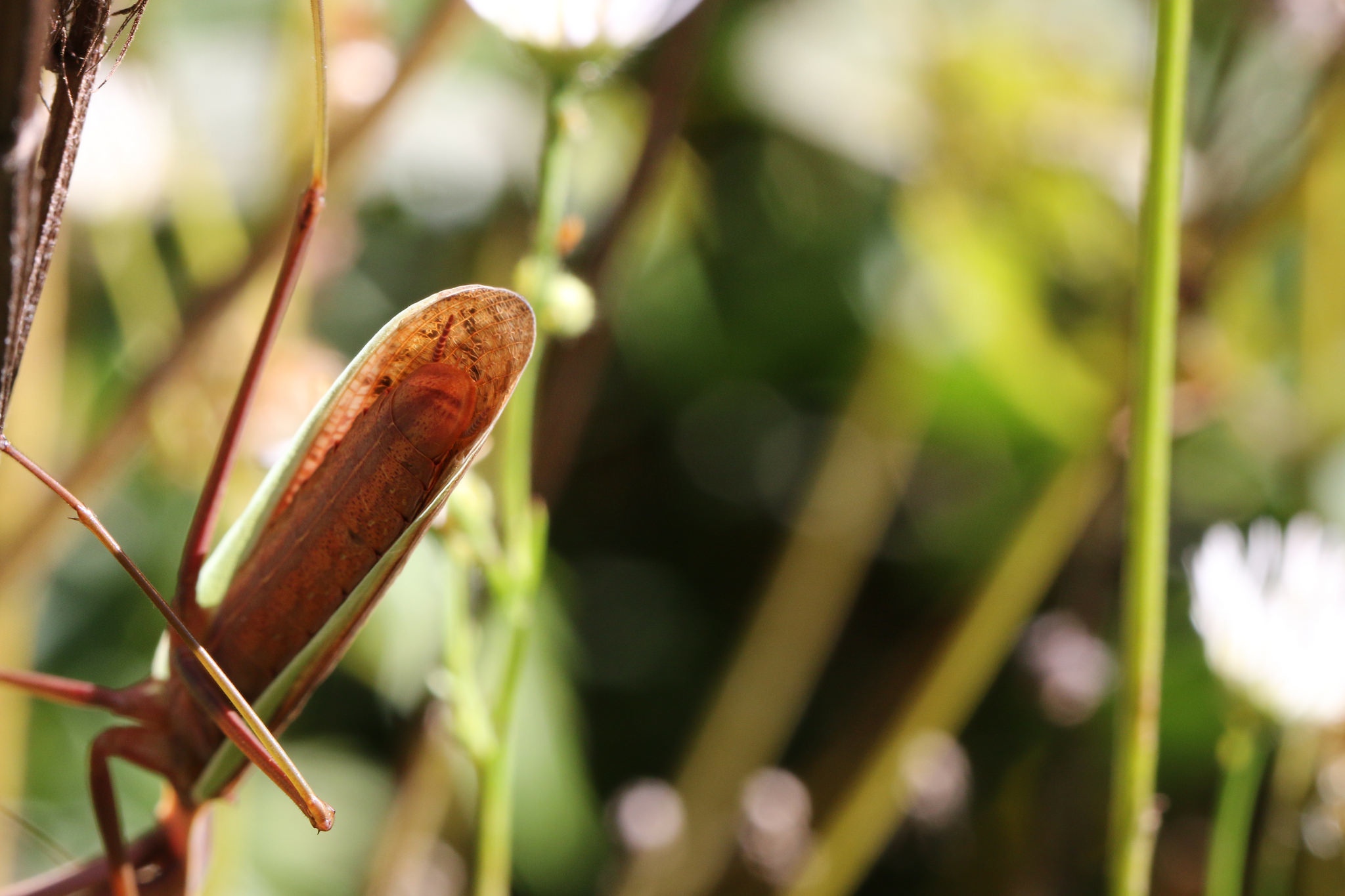 They also have a bright green edge around their wings. 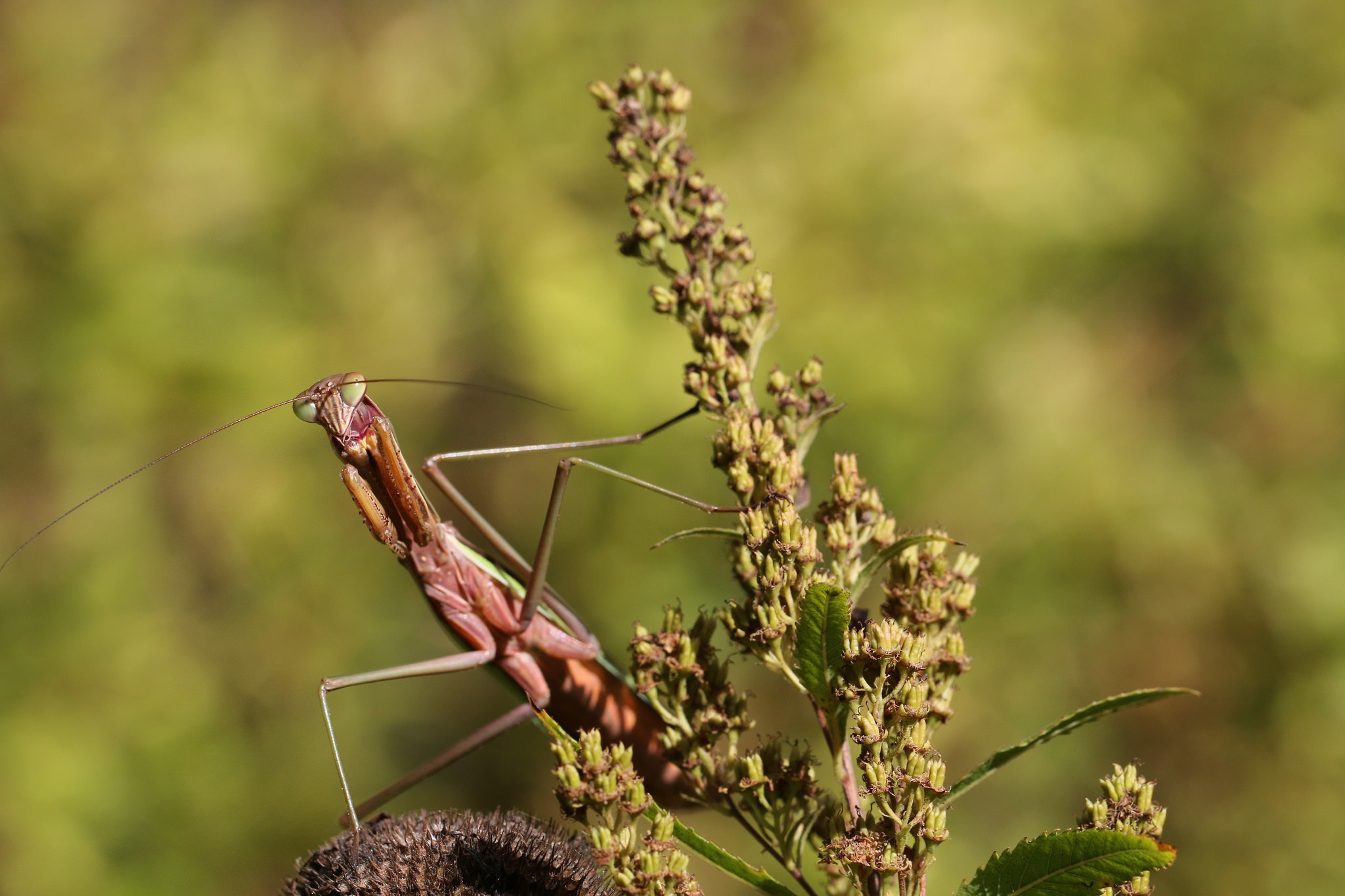 I am pretty certain that the egg case that I bought was full of Chinese mantids, as the majority of the insects in my garden had these characteristics.     The European mantids must have been locals.  Both species come in green and brown. 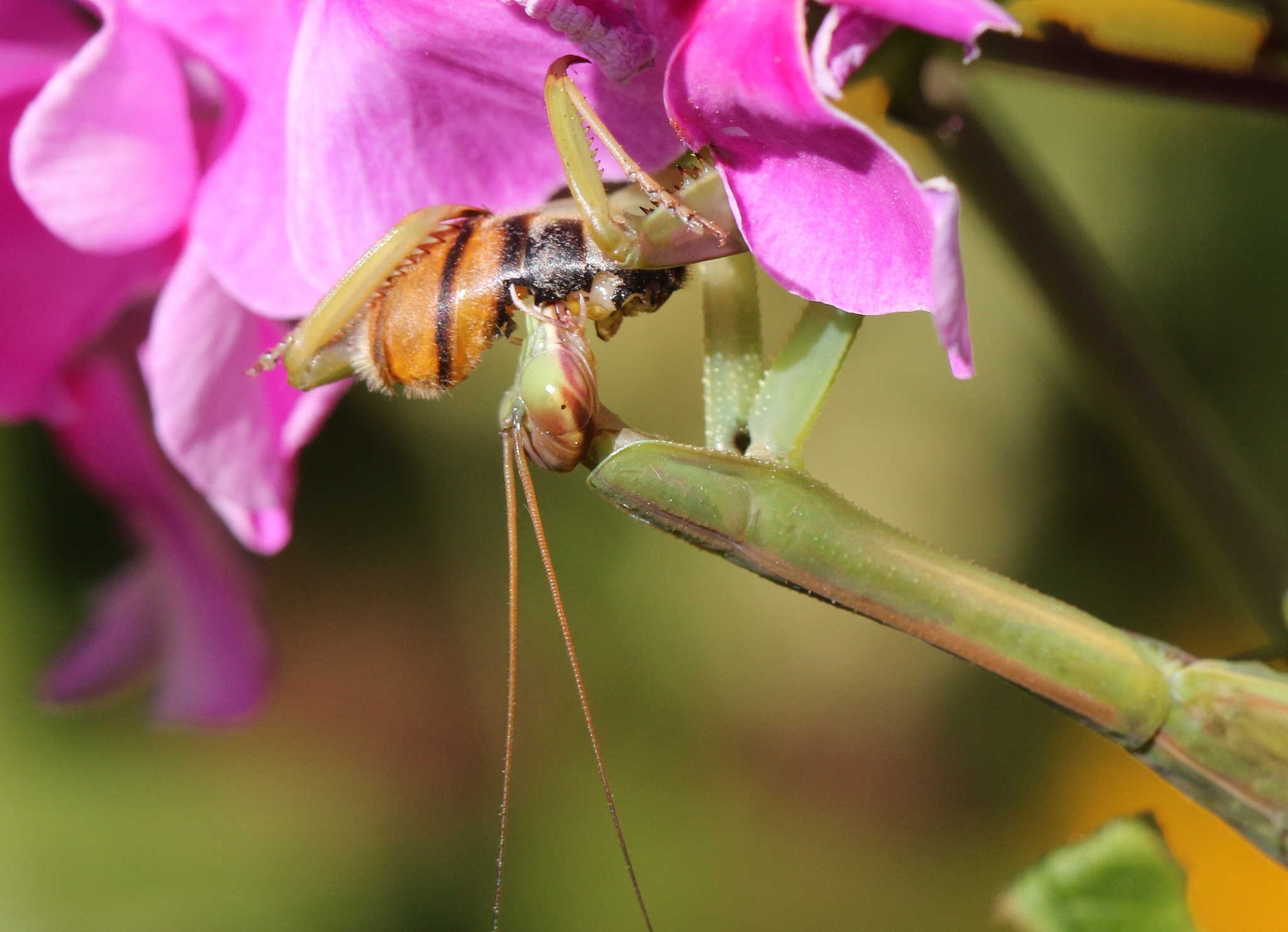 These are not invasive species- they were introduced to control pests in the garden.    Word on the street is that they are  not really a beneficial insect- they might be better classified as having a “neutral” effect.   This is because they will eat just about anything that crosses their path- including honey bees, native bees. and other pollinators. 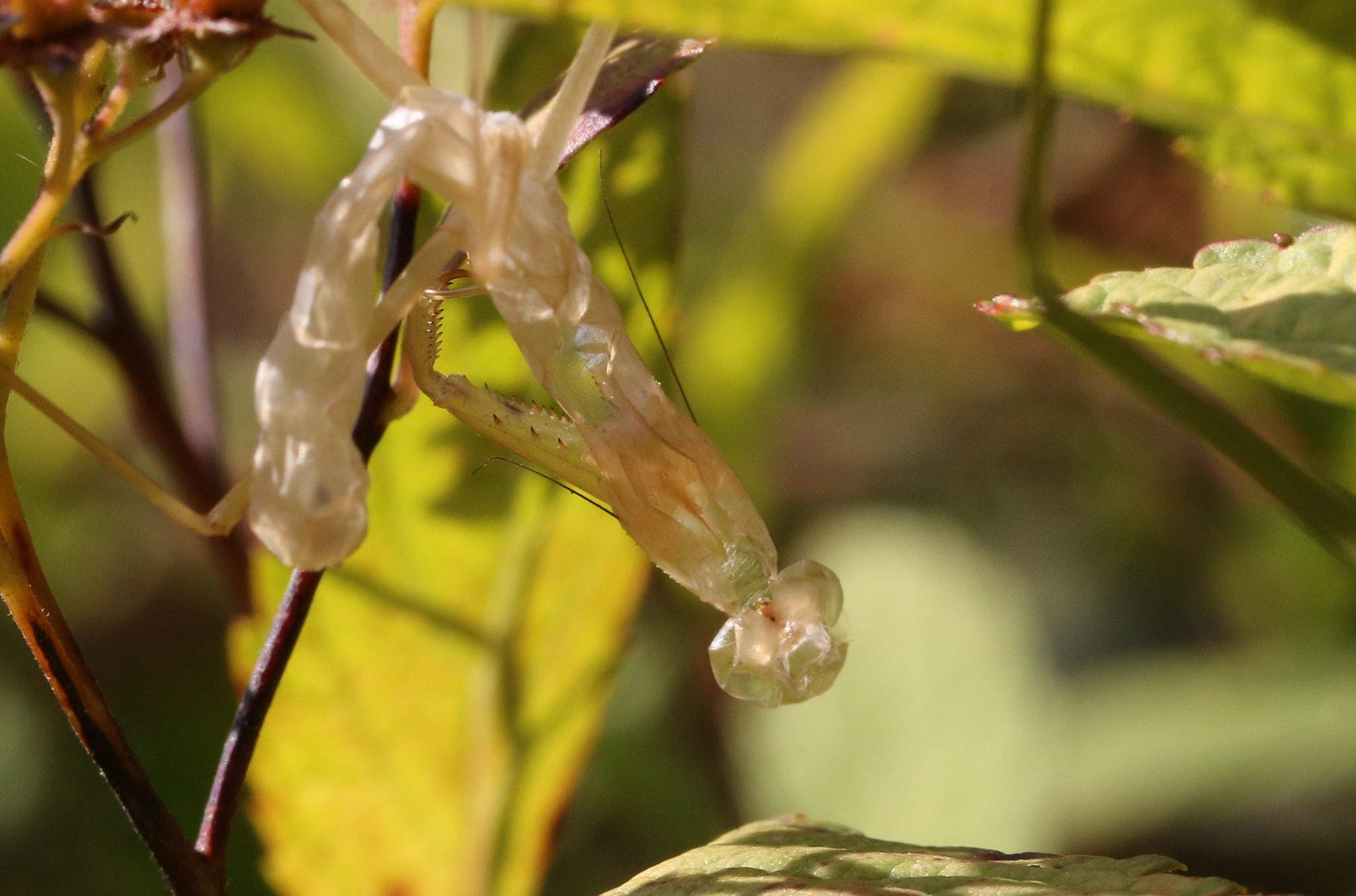 This is a praying mantis skin. 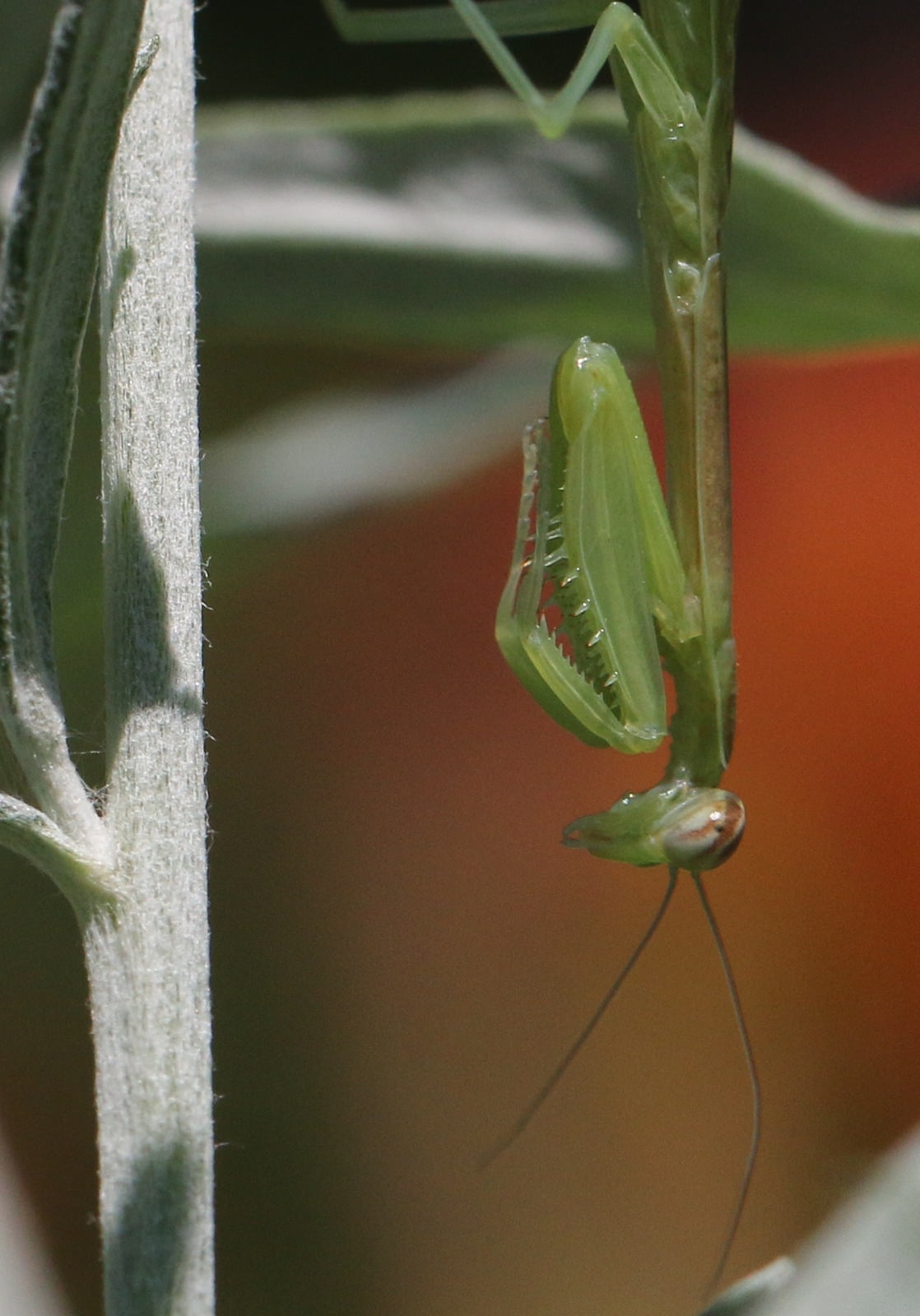 From what I observed, they shed their skins at least 4 times over the summer as they grew.    They would hang very still upside down from a leaf or stem, and turn quite grey looking.    Once the old skin was off they would walk a couple steps away and hang to rest, with a beautiful fresh skin, like in the photo above. 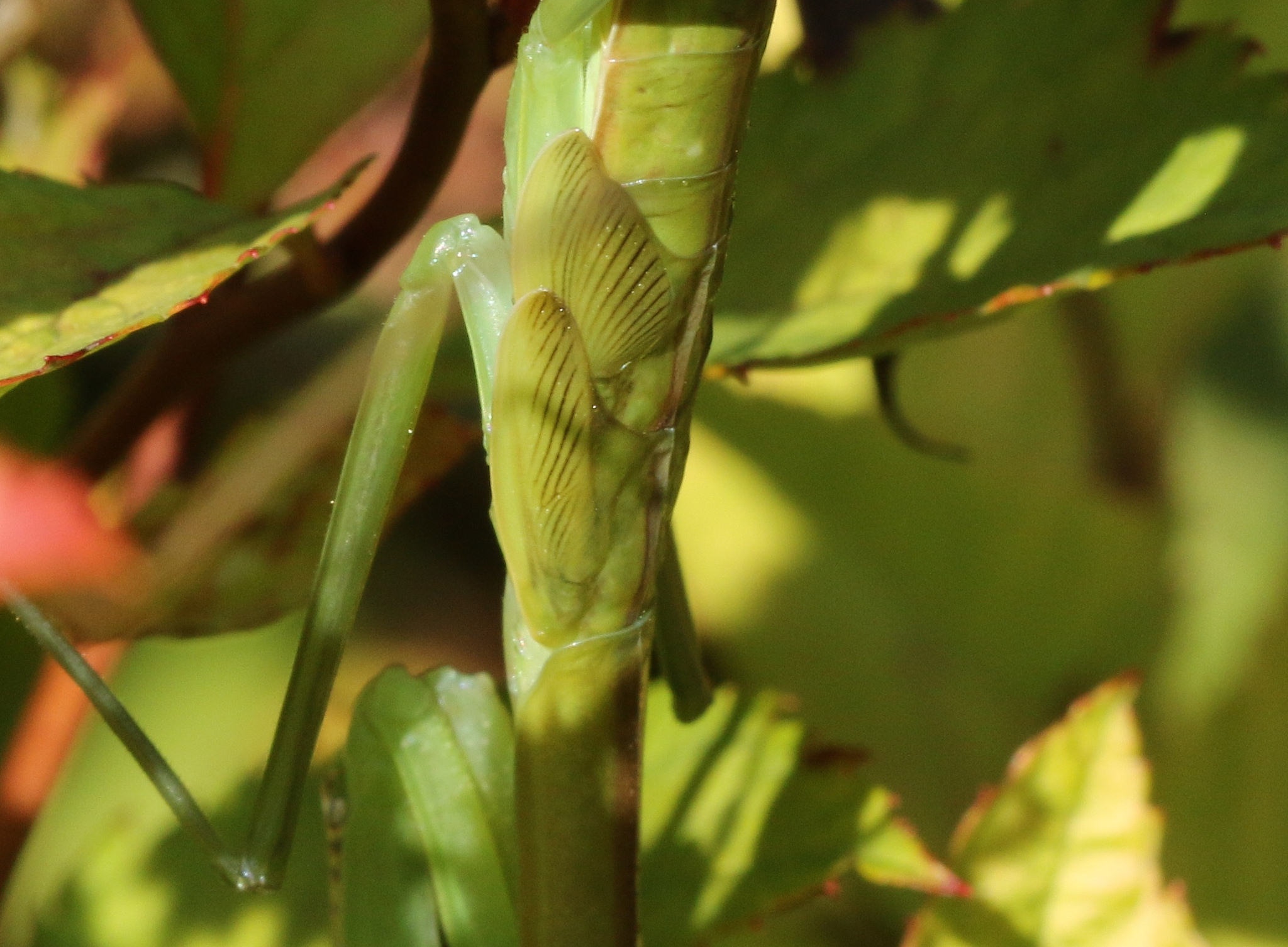 It took until late in the summer for the mantids to start to develop wings. 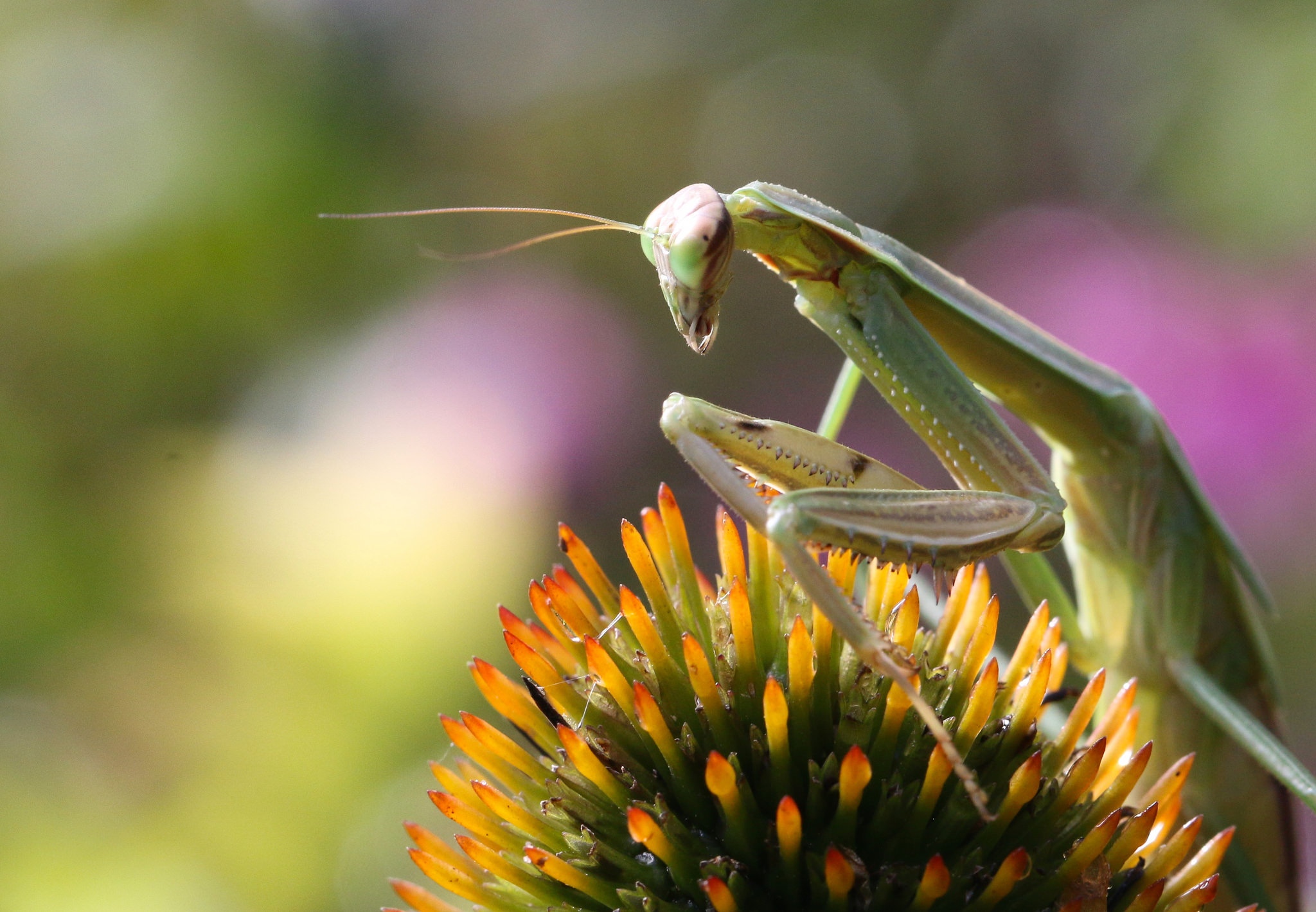 We had a nice warm fall here, with plenty of time for the mantids to mature and mate.   I did not observe any mating behaviour but I did notice that one day about 8 of the mantids had gathered in one bush.   I read that the females will send out pheromones to call the local males in, so maybe this is what was happening that day. 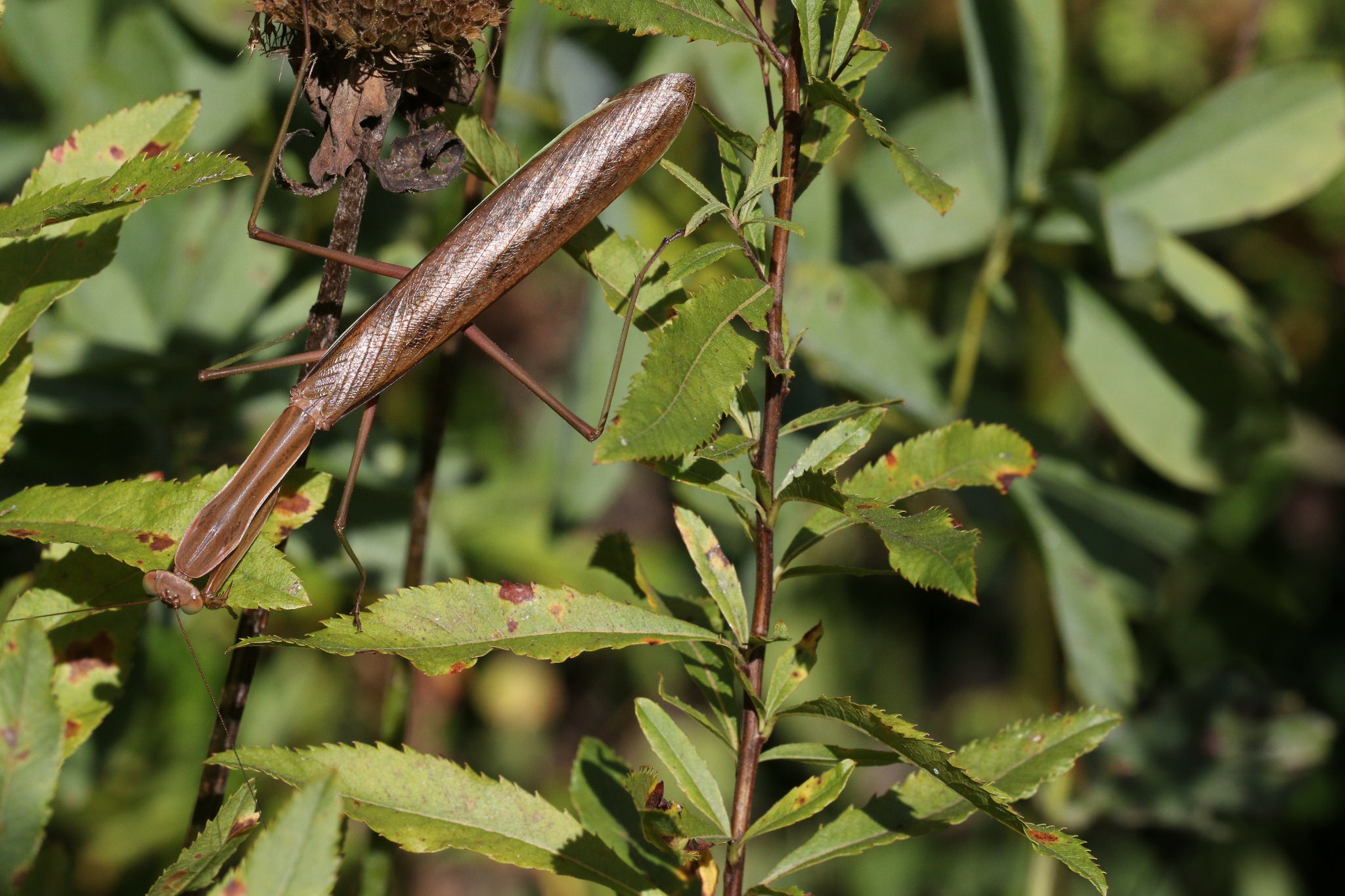 Females will decapitate males during mating, and even eat them afterwards.   All the mantids will die after the first hard frost, and overwinter inside egg cases.   The female lays her eggs on the stem of a plant like goldenrod, then covers them in a foam that then hardens into an egg case that will protect the eggs through the winter.    It’s my hope that there are some egg cases out in my garden right now under the snow, and that I will have even more praying mantis action in my garden come the warm days of summer. 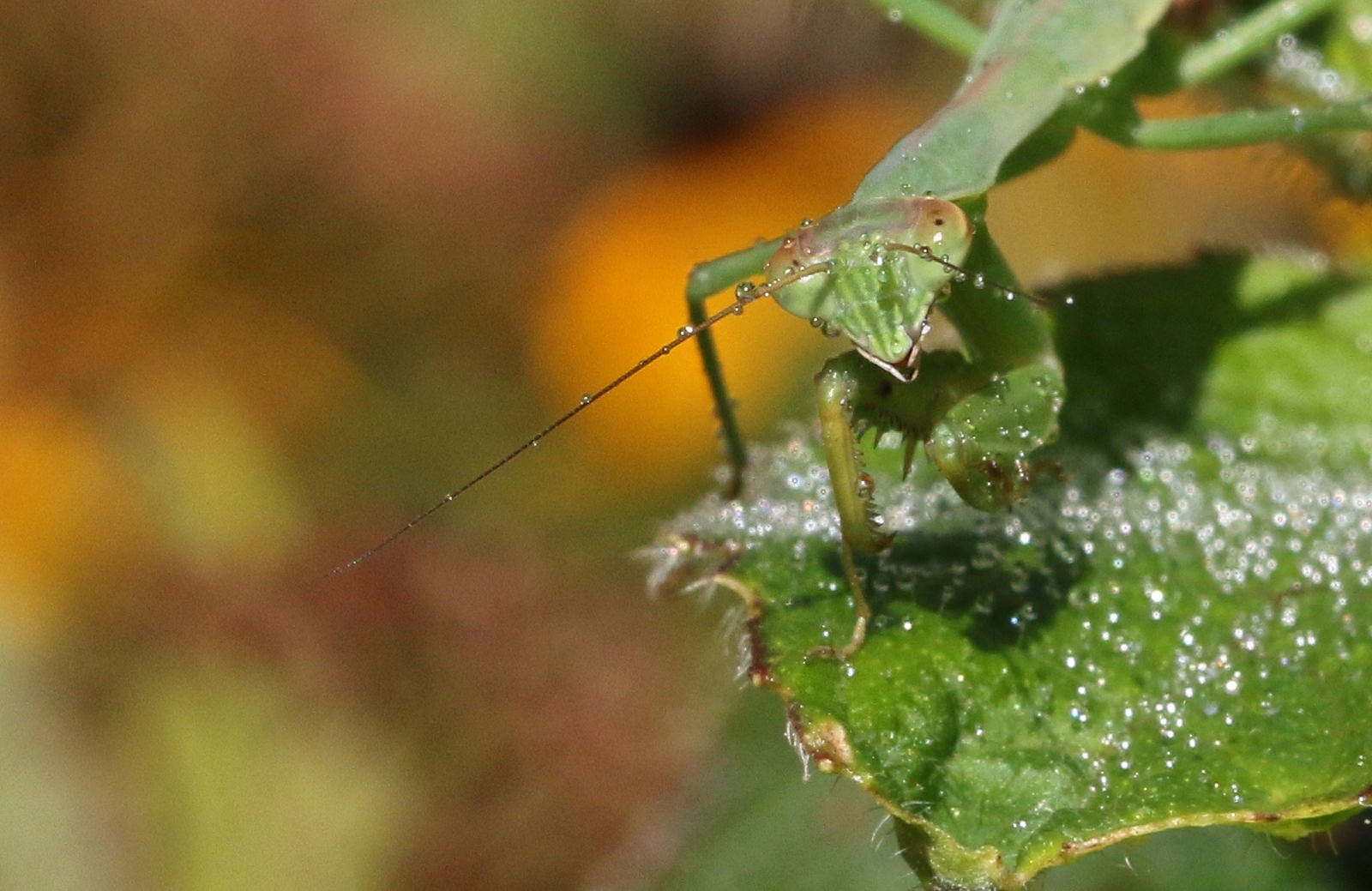 There is no doubt that looking for the little predators early each morning was part of my summer routine.    They set up territories in certain plants in my garden, so they were pretty easy to keep an eye on as they grew.    We shall see what next summer brings.

Thanks for visiting! Have you ever seen a praying mantis in your garden?