Look out.   I have saved all my prettiest photos for this blog. 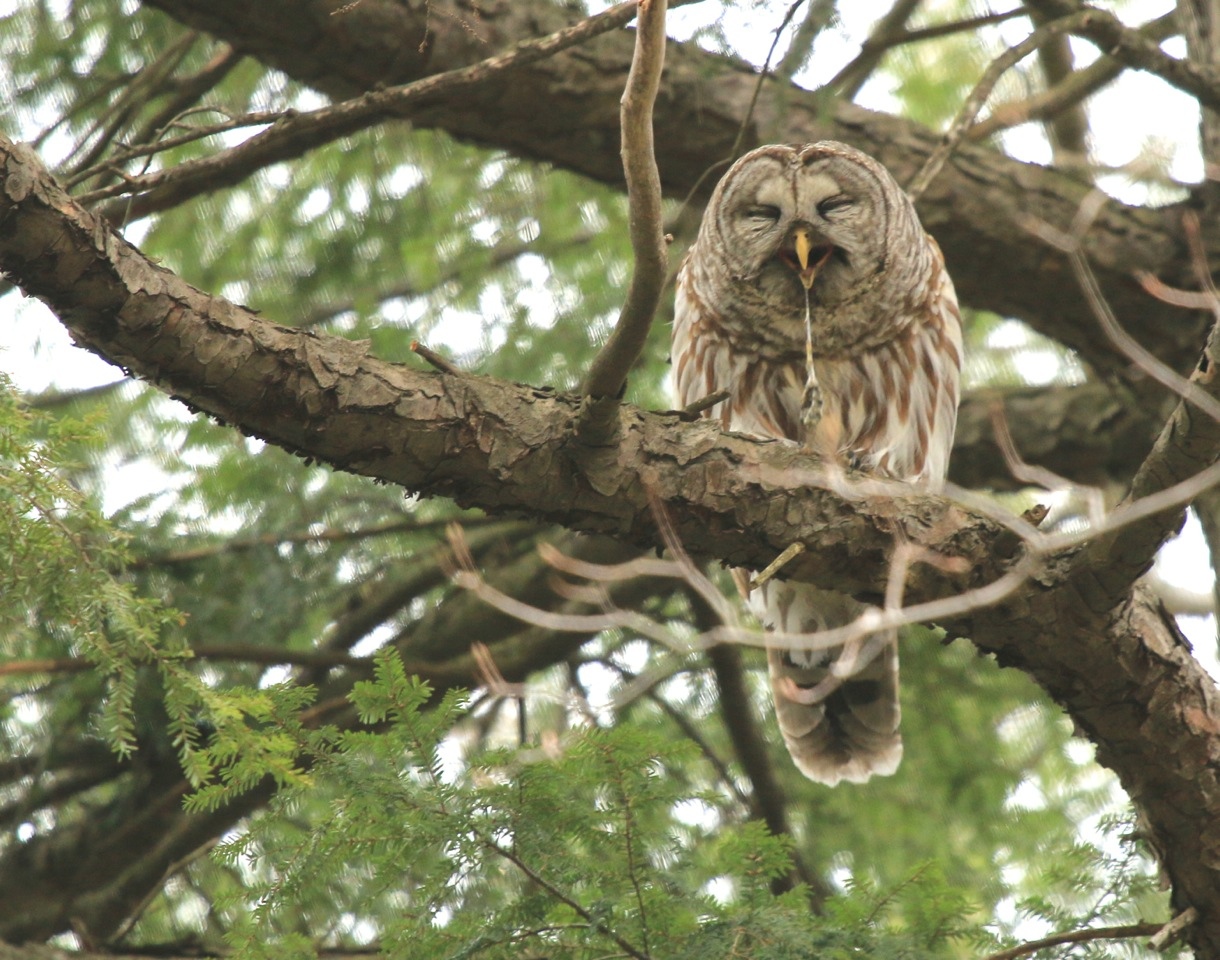 What’s this owl doing? It’s regurgitating a pellet.   Owls regurgitate pellets about once a day, usually from a favourite roost.   They just open their mouths wide, make a terrible face, and push them out.   Bleh.  Why do they do this?   And what’s in a pellet anyway? 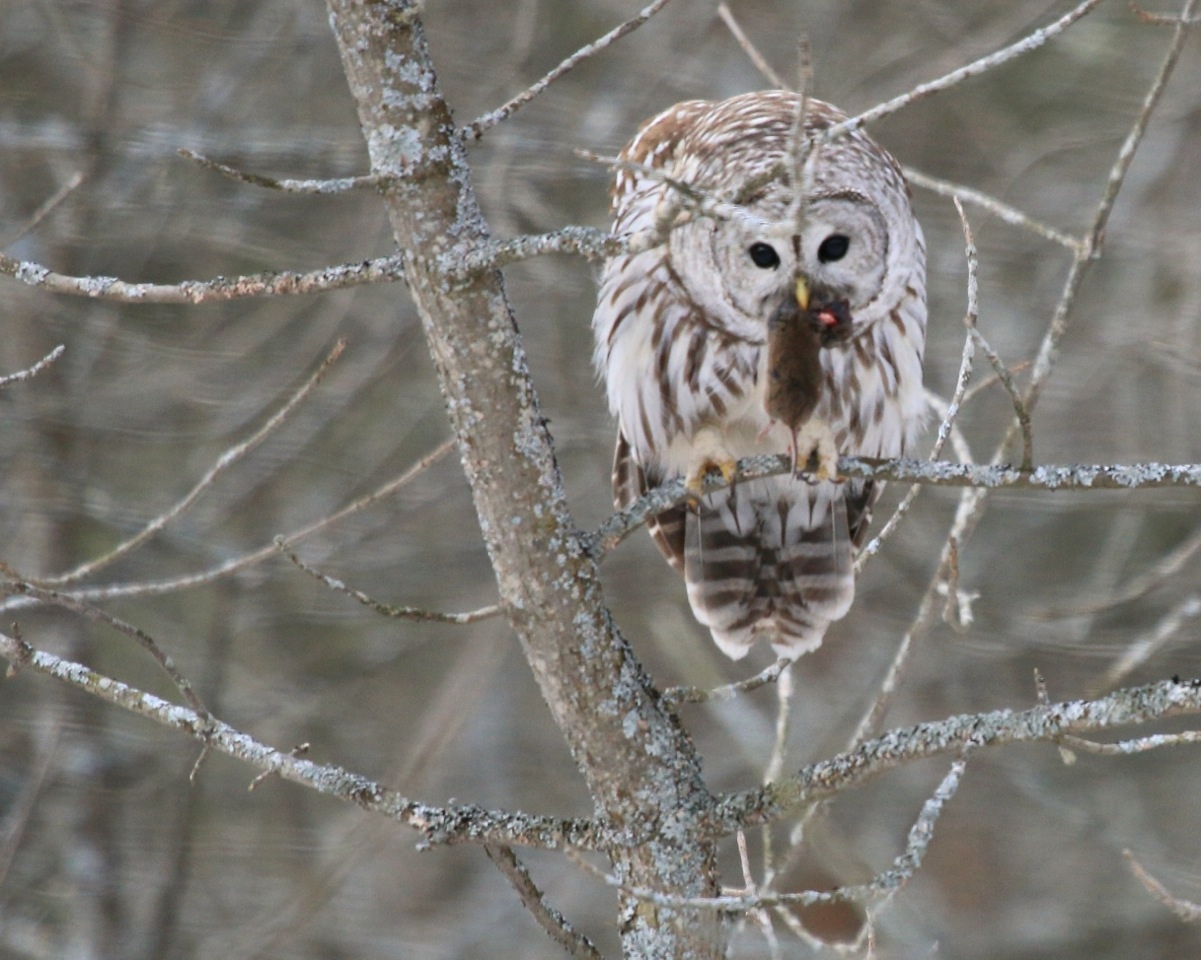 Barred owl just about to swallow a vole- all  in one piece.

Unlike us,  owls do not chew their food.   Instead, they swallow their prey whole. 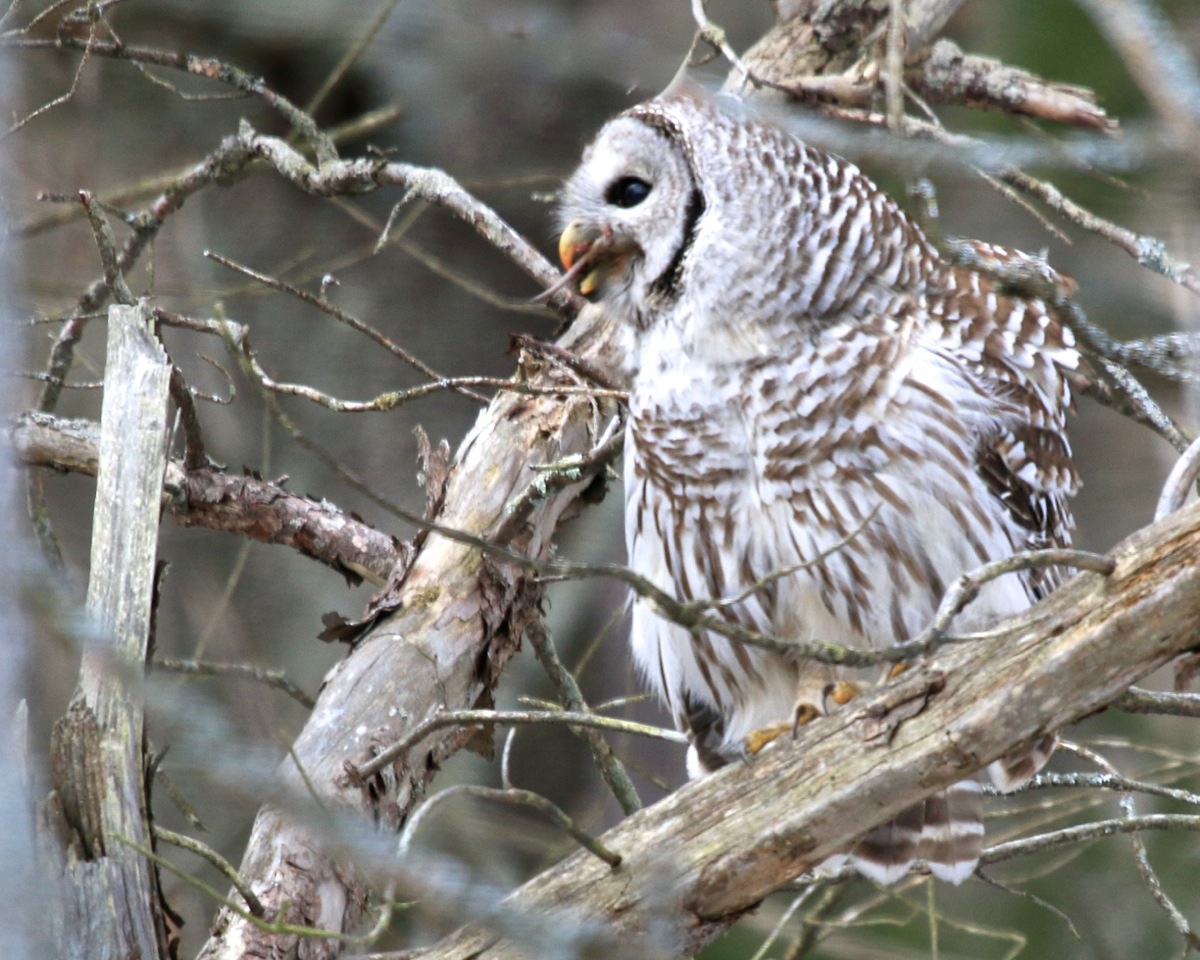 The tail goes down last.

Their stomachs have two parts.   The first part is the proventriculus, which produces acid, enzymes, and mucus.  This part begins the process of digestion of the prey.     The second part of the owl’s digestive system is the gizzard.   The gizzard acts like a filter, catching indigestible  parts of the prey like teeth, feathers, bones, and fur.    The gizzard compresses these indigestible bits into a pellet, which will be regurgitated several hours after the owl has eaten. 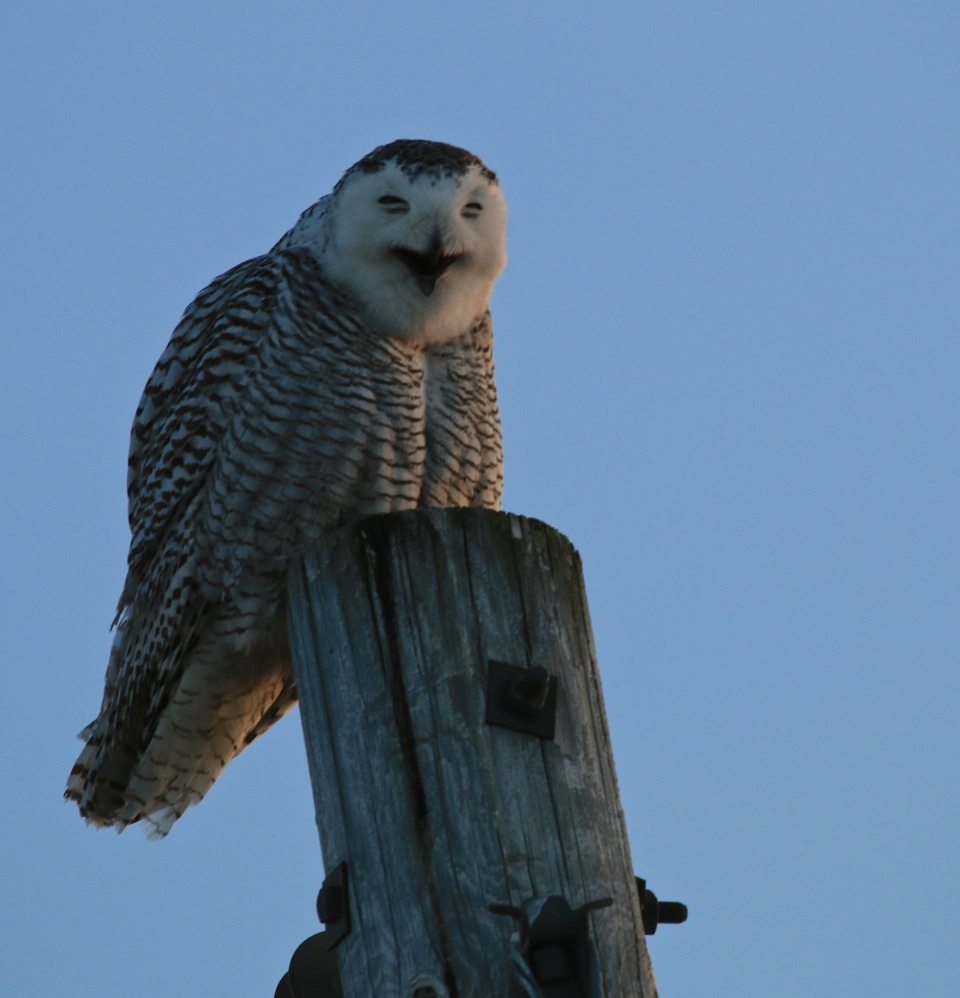 When I found this Snowy Owl it was making the weirdest faces.    What I soon realized was that it was getting ready to expel a pellet.    Since the pellet partially blocks the owl’s digestive system, it needs to get rid of it before it can eat again. 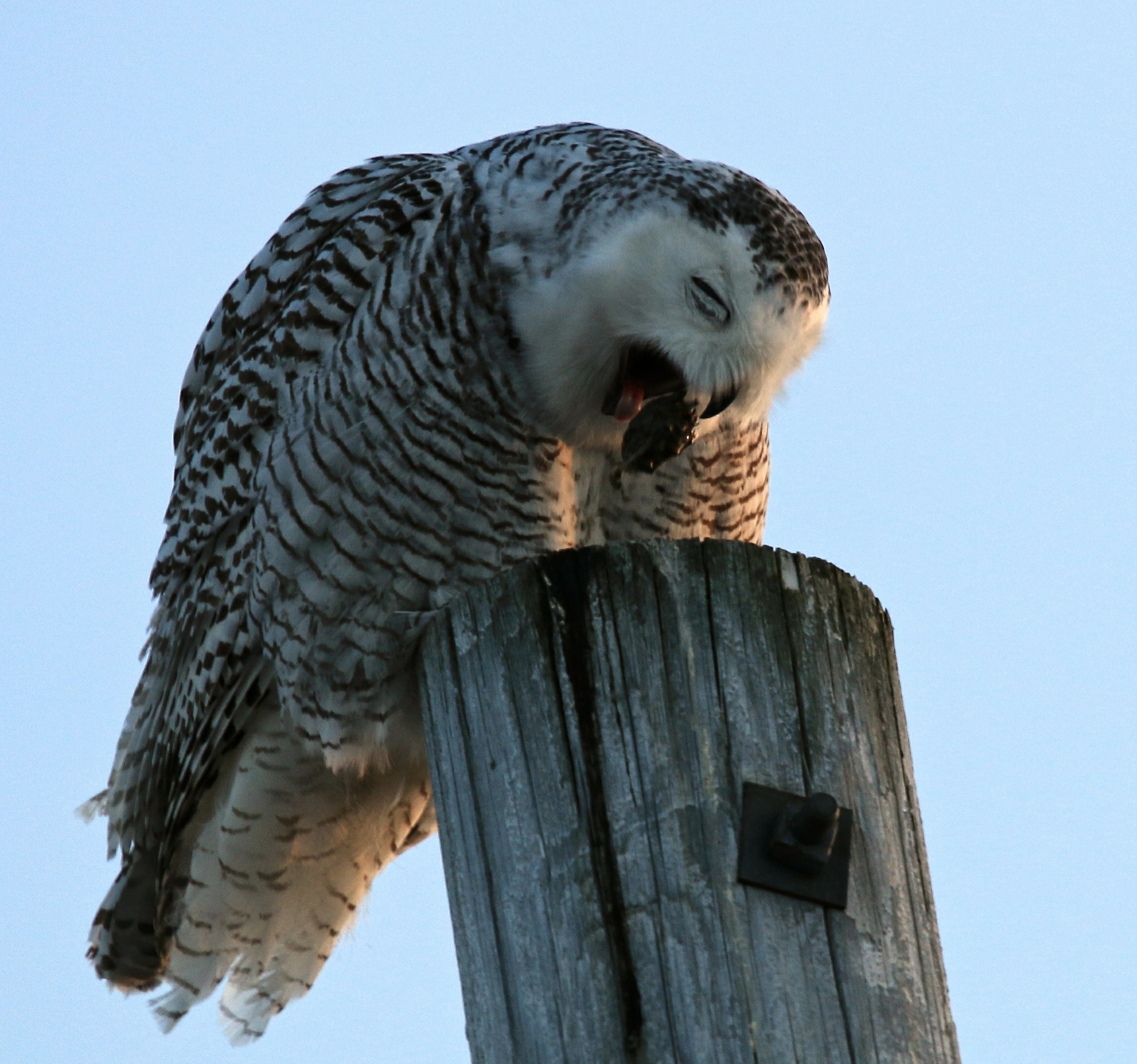 If you find a pellet you can take it home, take it apart, and find out what the owl has been eating.

Do I do this?   Yes.   Of course.  I’ve brought home lots of pellets.   I also collected Barred Owl pellets and brought them in for my Grade 2 students to dissect.   They were engaged and focussed for 90 minutes.   Just so you know, that is unheard of! 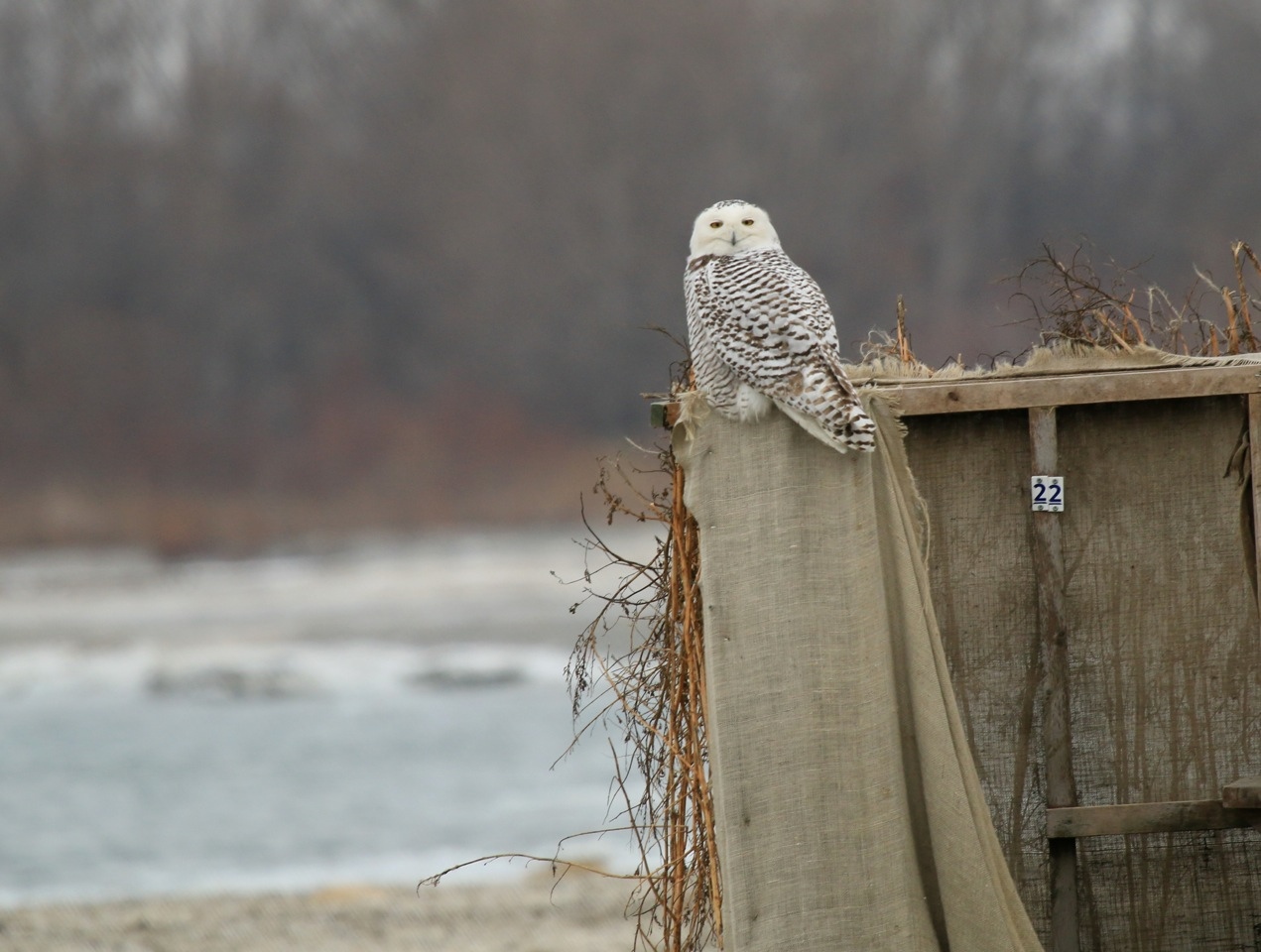 In my last blog I wrote about my favourite Snowy Owl, the Queen of Gull Island.   She likes to sit on a duck blind for much of her day.  Sure enough, I found pellets scattered on the seat and floor of the blind when I looked in there.   I wrapped one up in a Kleenex, slipped it in my pocket, and took it home.   The only tricky thing was remembering which Kleenex it was wrapped up in, so I would not use it to blow my nose when I was hiking back to my car. 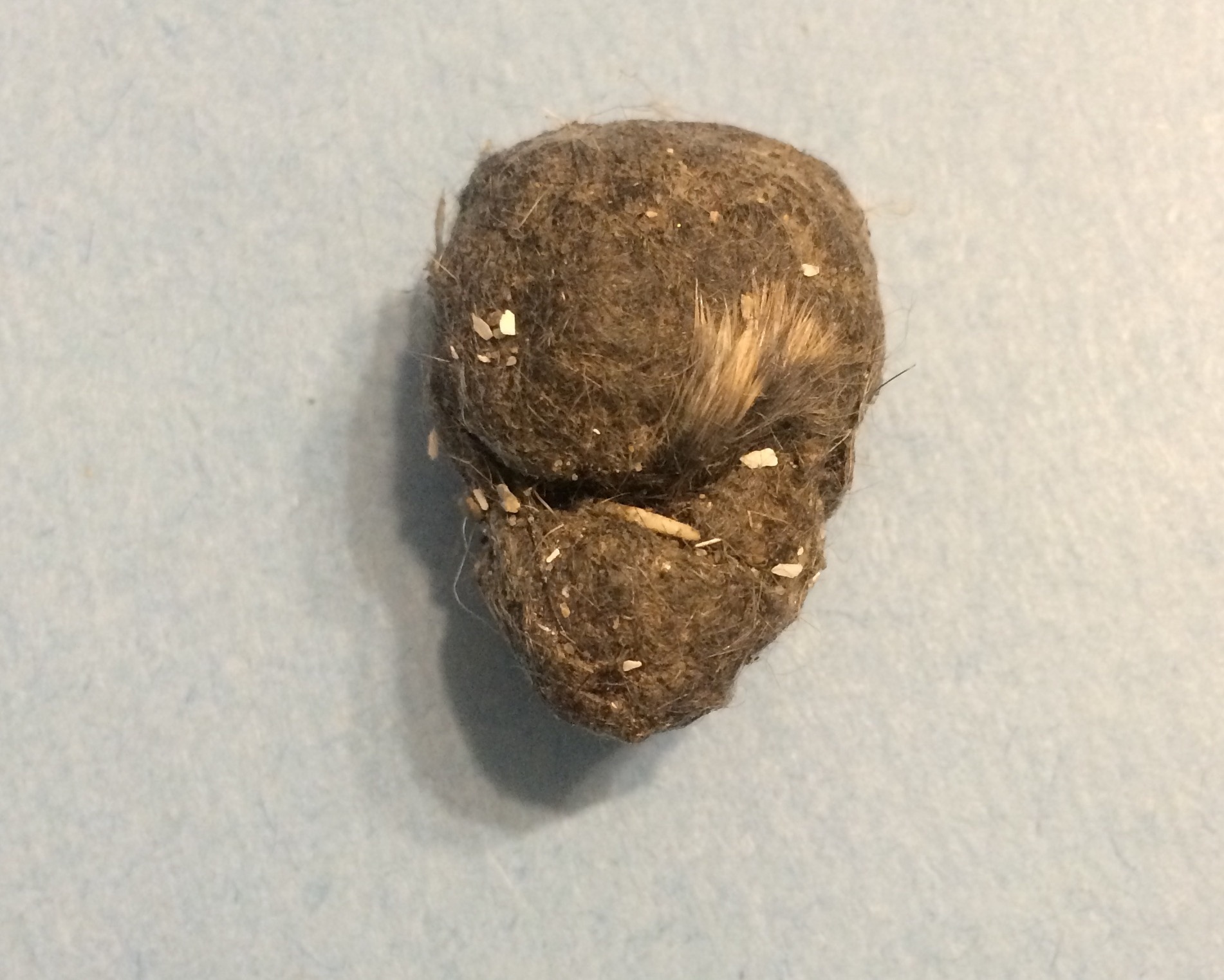 Snowy Owl pellet with feather and a whole lot more inside.

Here’s the pellet I collected the other day.   You can see feathers from the waterfowl this Snowy Owl hunts, as well as little bits of bone. 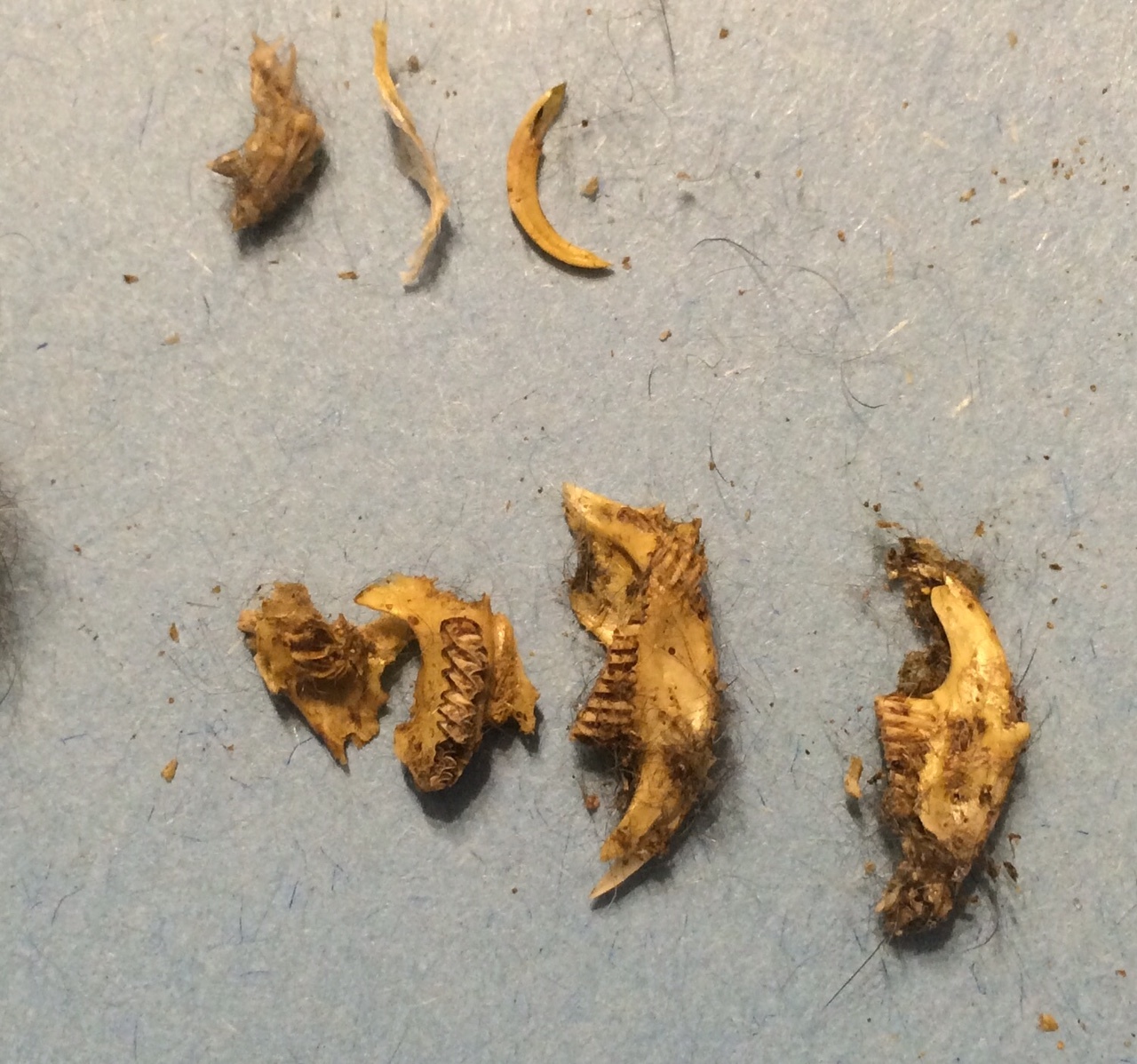 Jawbones, teeth and ribs of a little rodent.

Taking it apart revealed rodent jaws and teeth.   There are a lot of mice on Gull Island. 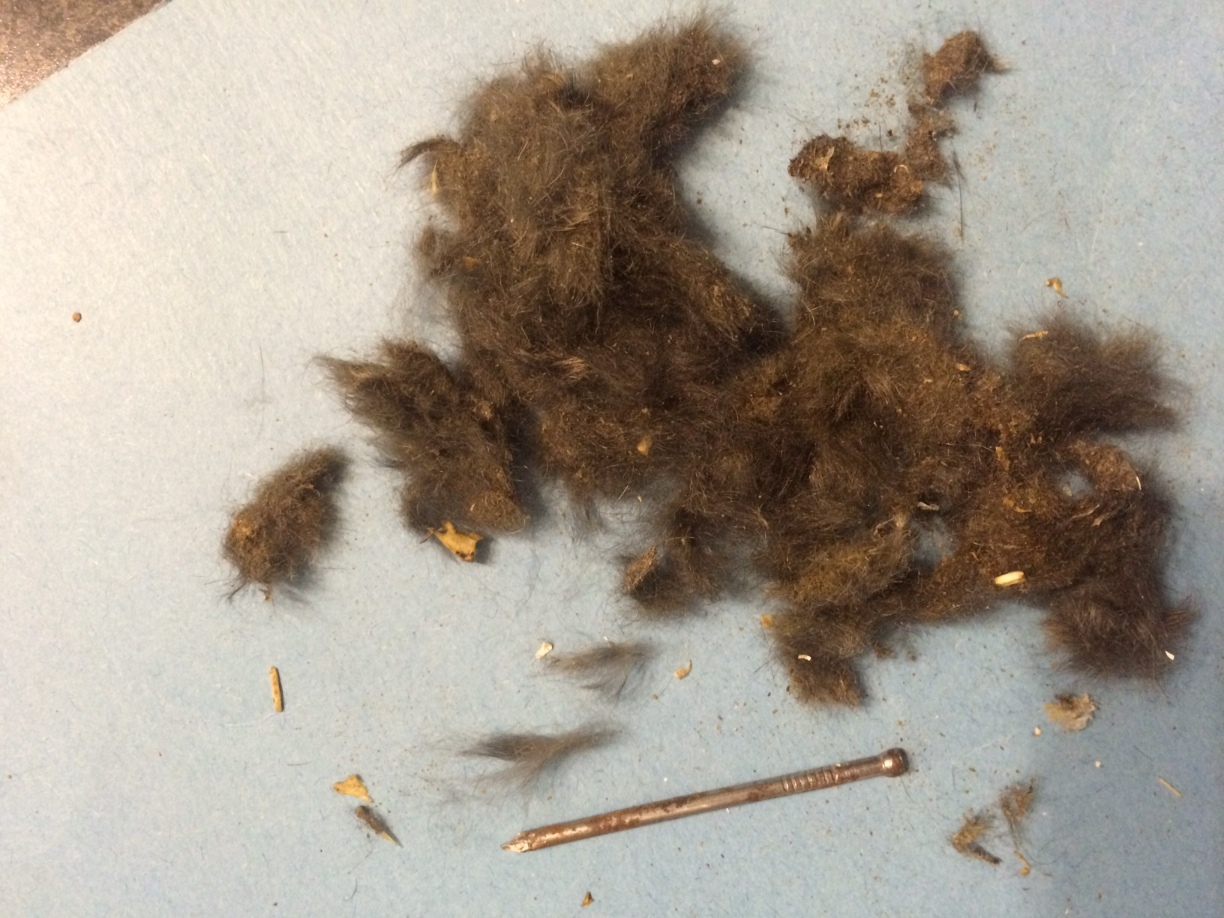 What did YOU do on Saturday night?

Here’s the mess I made. 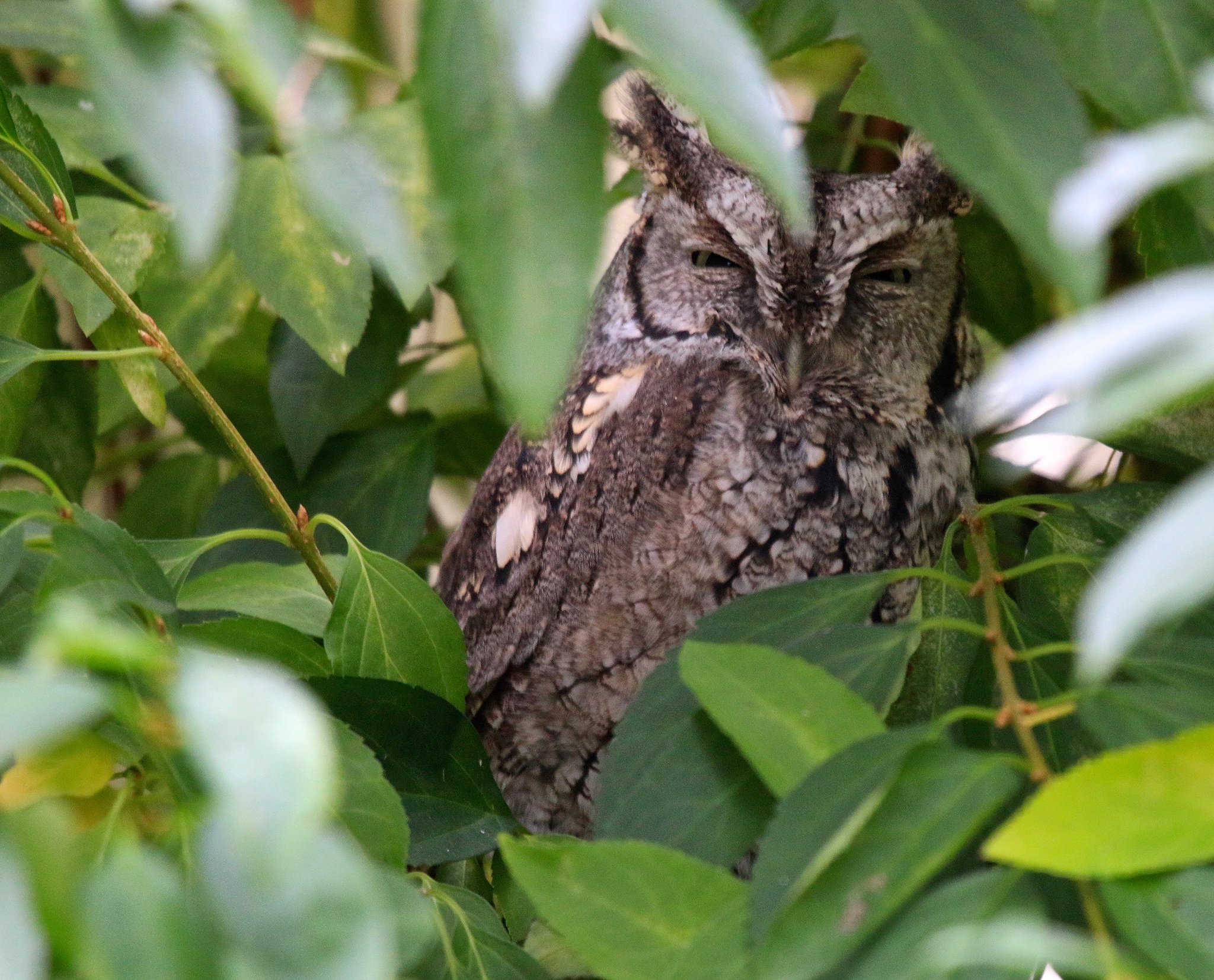 A pellet also revealed something fascinating about the elusive little screech owl that lives in my neighbourhood.     Last February I heard a huge disturbance in my backyard, birds squawking and going crazy.   I went outside and saw a Screech Owl roosting in a red pine tree.  By the time I got my camera it had flown away, but it left a pellet below its roosting spot. 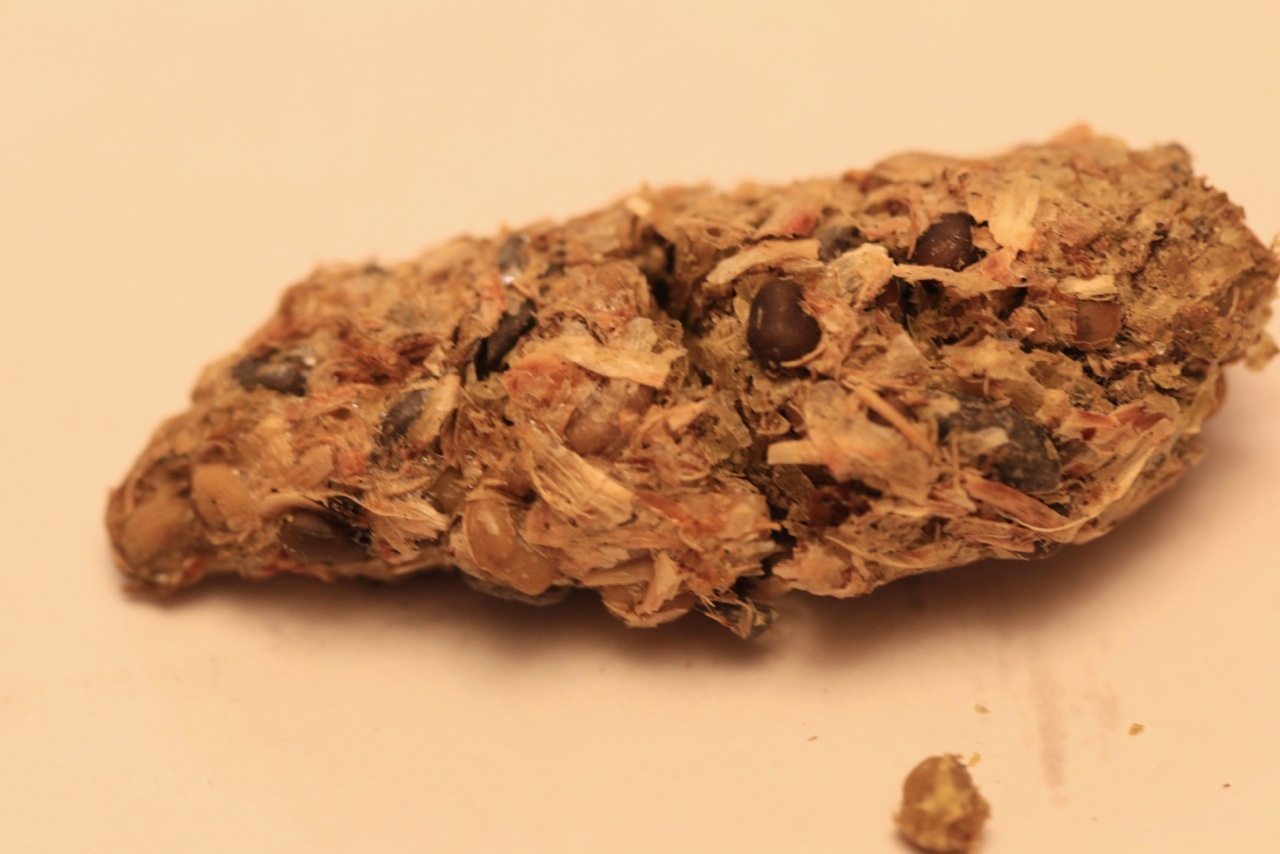 No, it is not fruit and nut bread. It’s a Screech Owl Pellet.

I dissected it, fully expecting to find bones and teeth and fur of rodents.   Interestingly,  it was full of small pebbles, and the exoskeletons of some kind of invertebrate.   No fur, no bones. 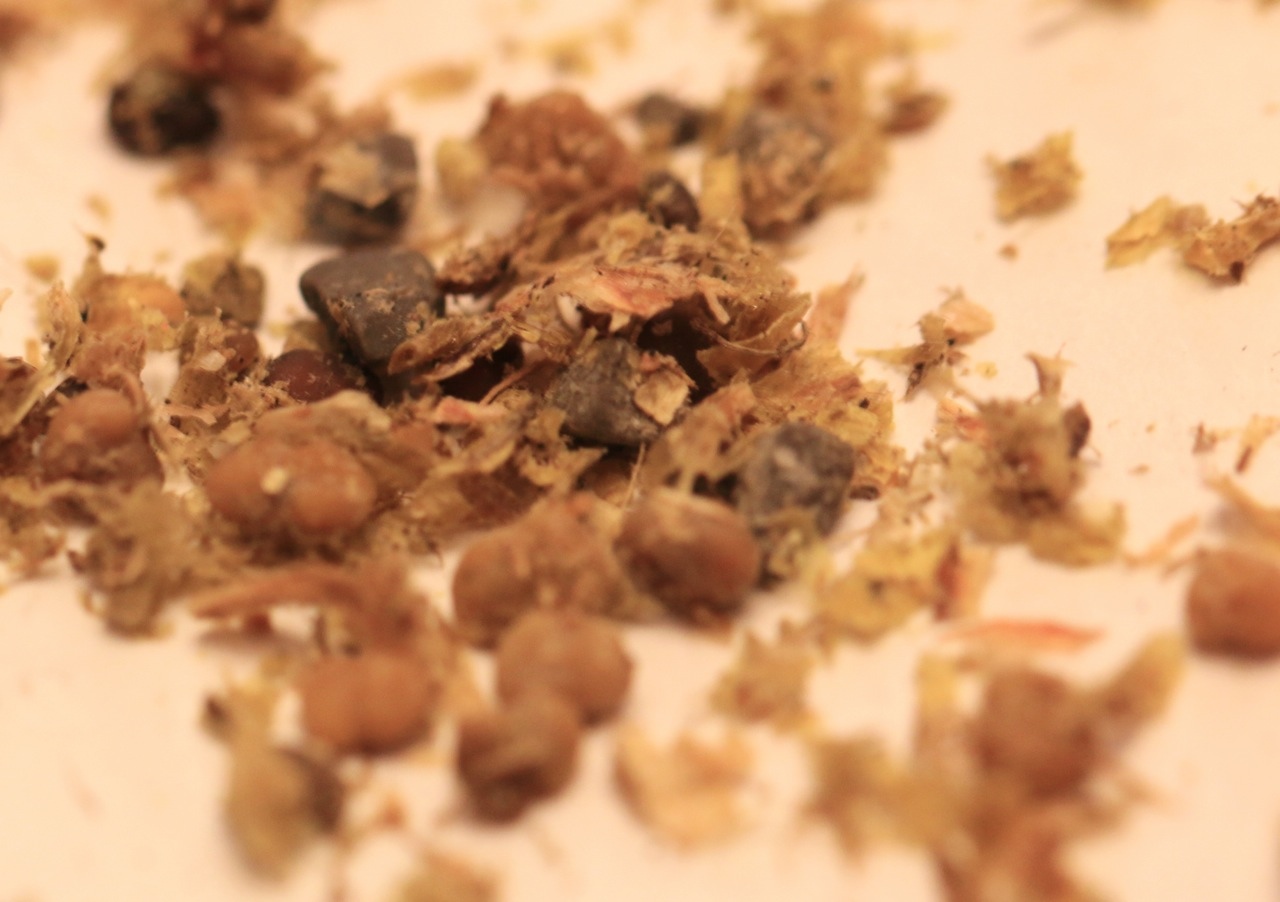 Screech Owls have a really varied diet and are little opportunists.  My best guess is that the pebbles and exoskeletons I found in the pellet were from caddisfly nymphs who live in our backyard stream. 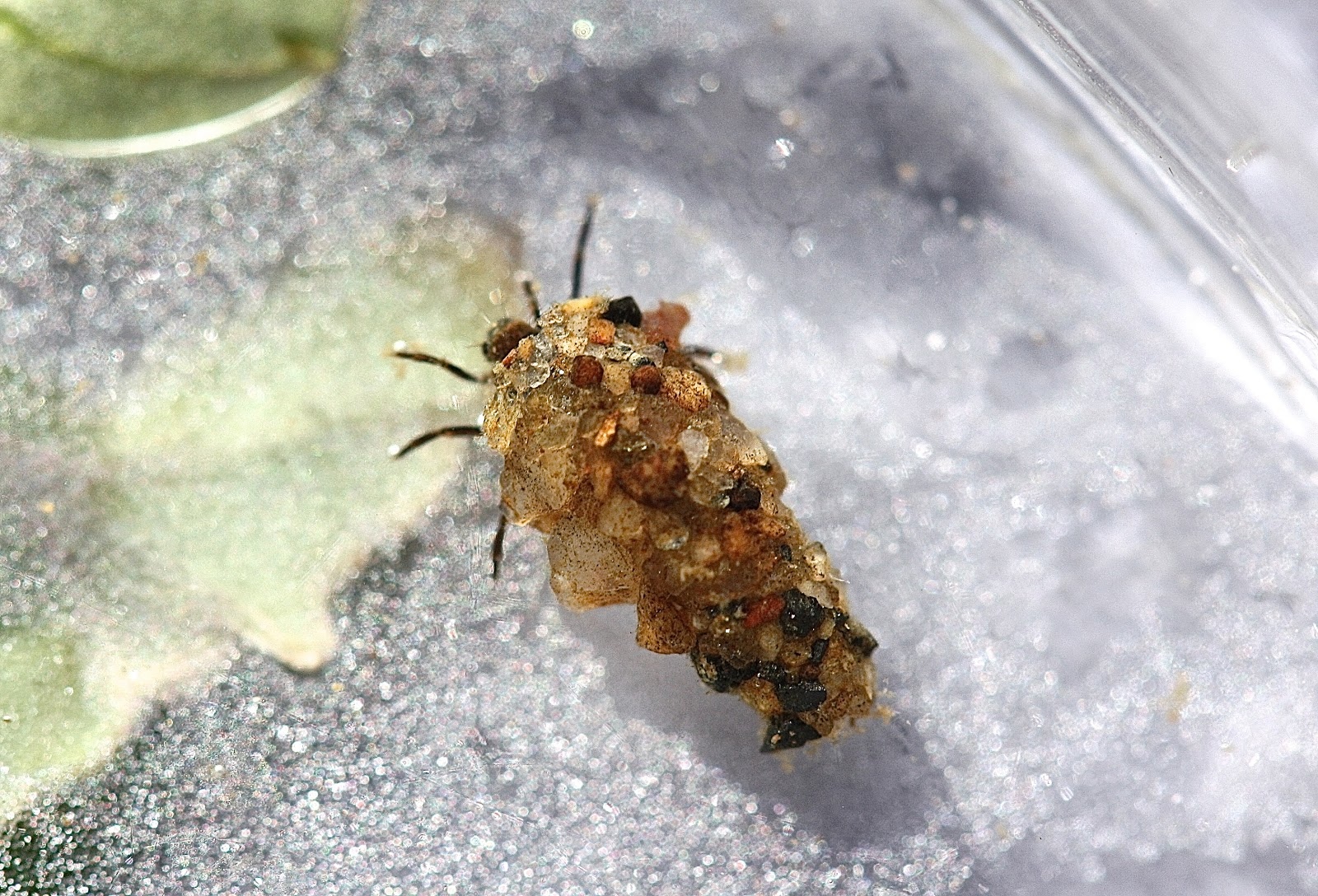 These little aquatic insects coat themselves in pebbles, sticks, and other bits and pieces from the stream bottoms where they live.   Good camouflage and protection for them- but apparently not good enough to elude the crafty Screech Owl. 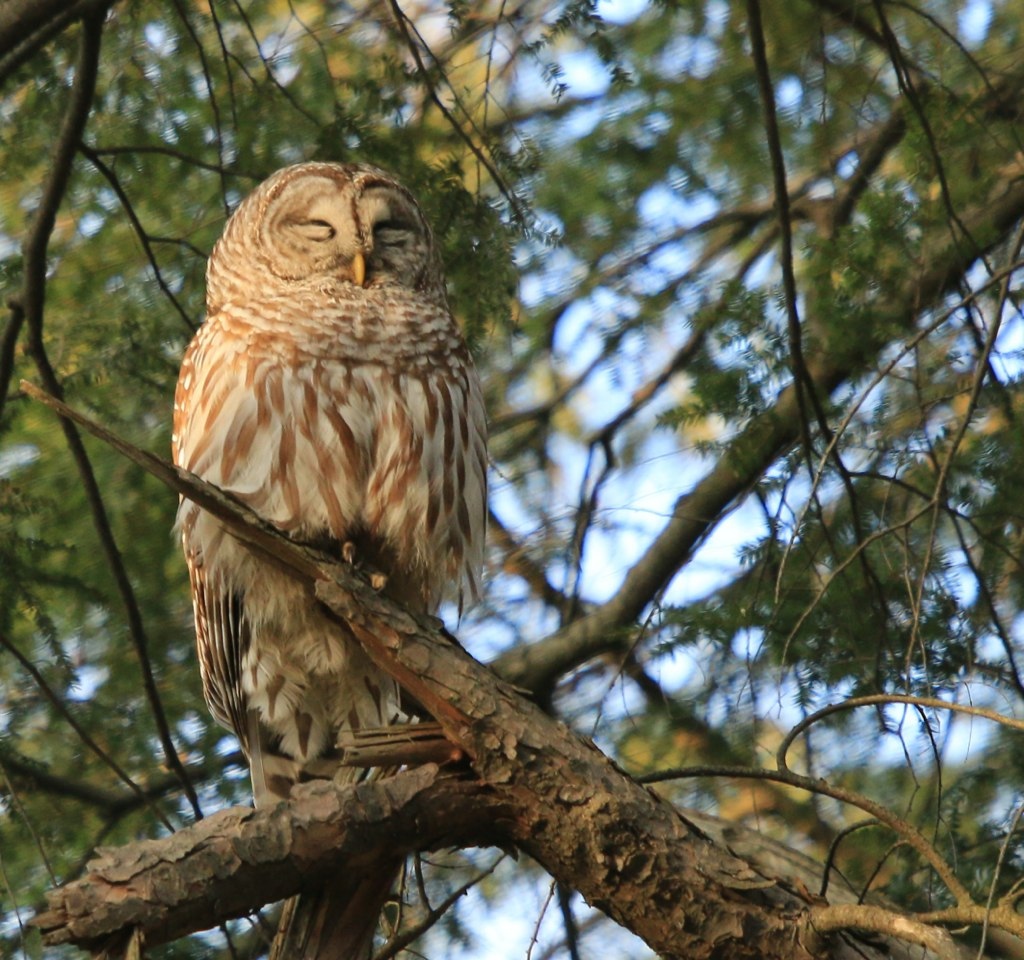 What has this Barred Owl been eating?

Though the Screech Owl’s diet was certainly interesting, it wasn’t 100% surprising that it was finding its prey in the water.    When I collected this Barred Owl’s pellets and gave them to my friend’s little boys, they found crayfish exoskeletons in them. 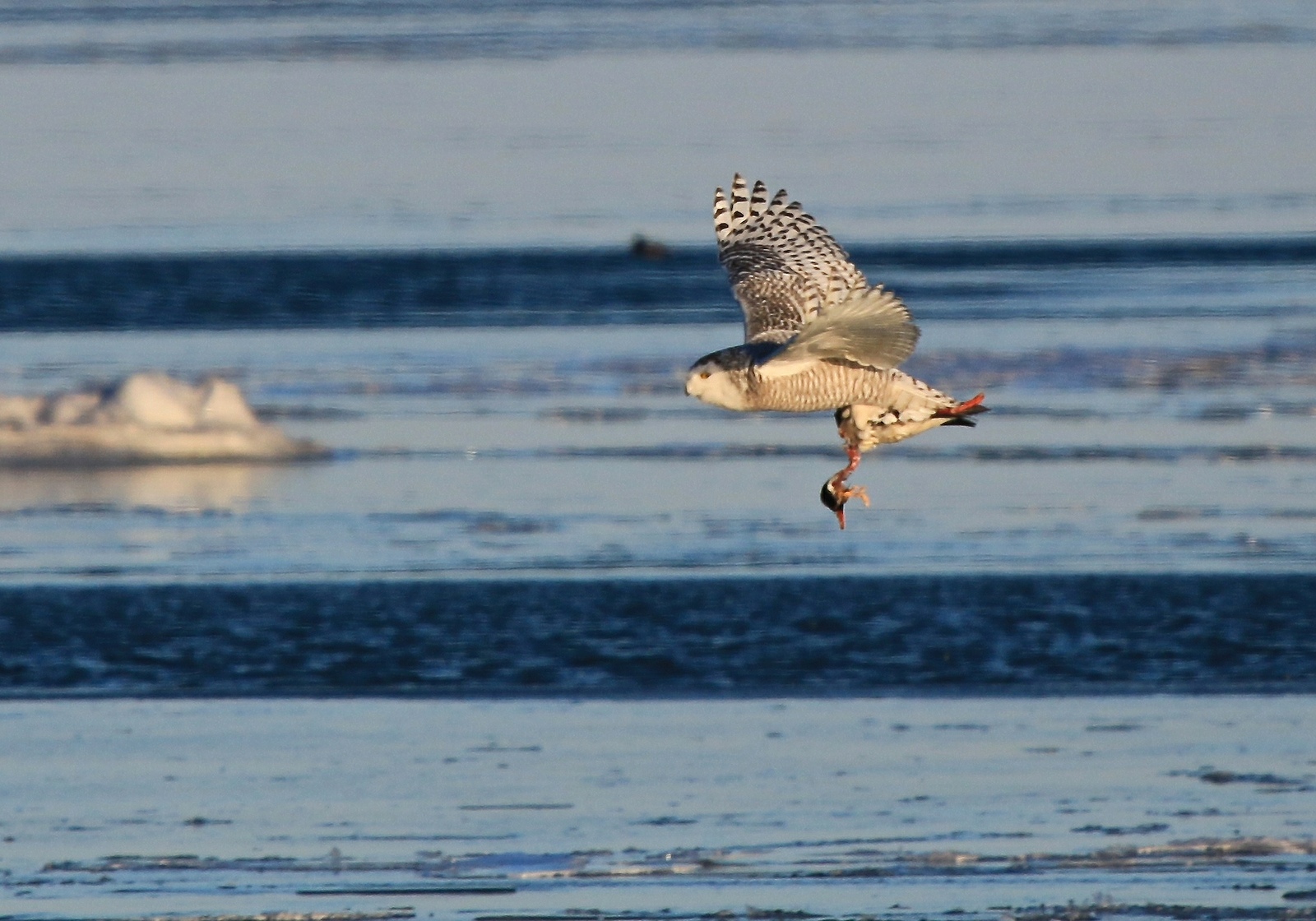 Owl pellets give us clues about the lives and habits of owls that we might not ever have known about otherwise. If you find one, you have probably found an owl’s favourite roosting spot.   If you like, you can take the pellet home and dissect it.   Put out some newspaper, get some sharp tools to pull it apart with, and see what’s inside.   You might want to give the pellet a day or two to dry out, but don’t wait too long, or forget about it, as it will get moldy (maybe I’ve done this…).