I had a Great Gray Owl living on my street last winter. 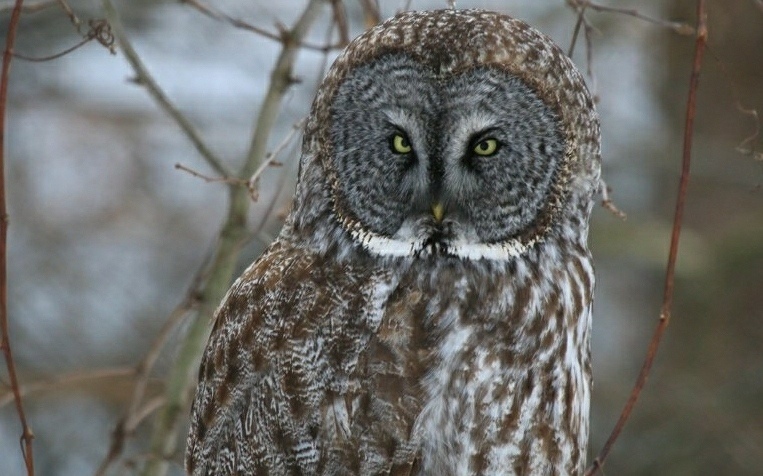 Having a Great Gray Owl around is like having a big secret that you want to tell everyone about but you can’t.   You see, Great Gray Owls are rare down here in Southern Ontario.   And they are exquisitely beautiful.  When they do show up the odd time from the north, they create quite a stir.   People drive from all over to see them.  This can be quite disruptive for the owl and for the neighbours.  So I kept it to myself, mostly. 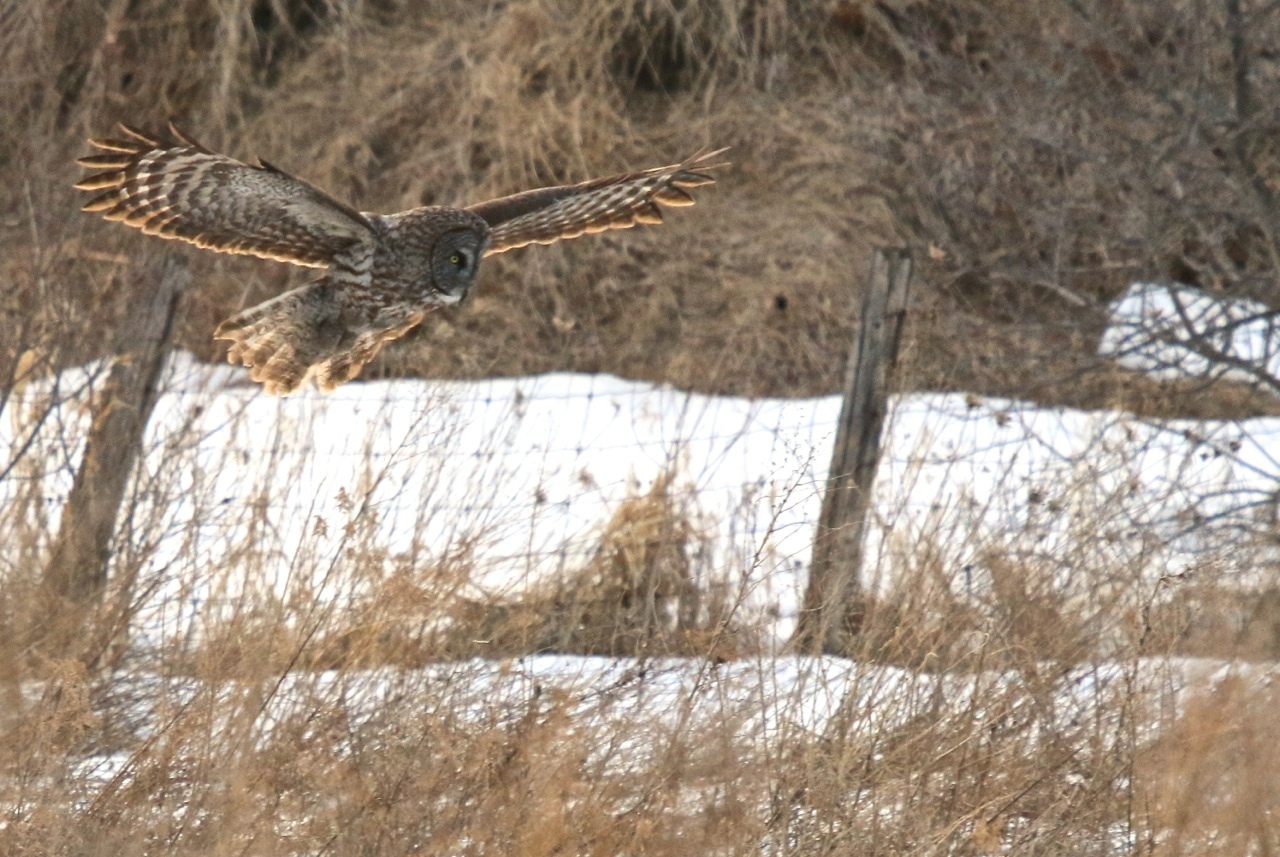 Look at that Wingspan

The first time I saw the owl it just flew across the road above my car when I was driving home from work at dusk.   It’s wingspan was enormous!  Great Gray Owls are North America’s largest owl with a wingspan up to 60 inches (2 metres) , but they are mostly fluff, weighing only 2-3 pounds, about half the weight of a snowy owl.  I actually can’t believe they only weigh 2-3 pounds…they are huge!!! 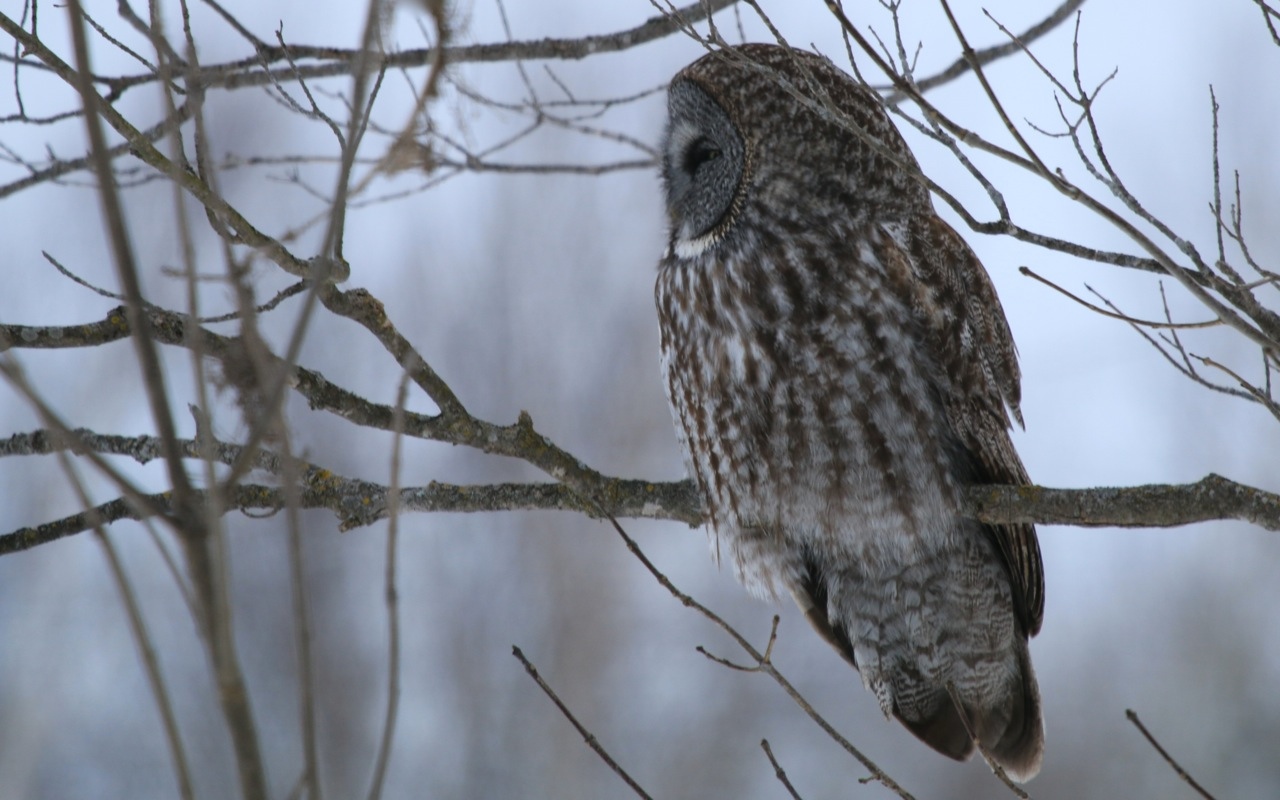 They have soft, thick patterned grey and white feathers that allow them to blend right in with their surroundings.    In the photo above, the owl was sitting in a grove of trees on a grey, foggy morning last February.    I drove right past it without realizing it was there until the last second. 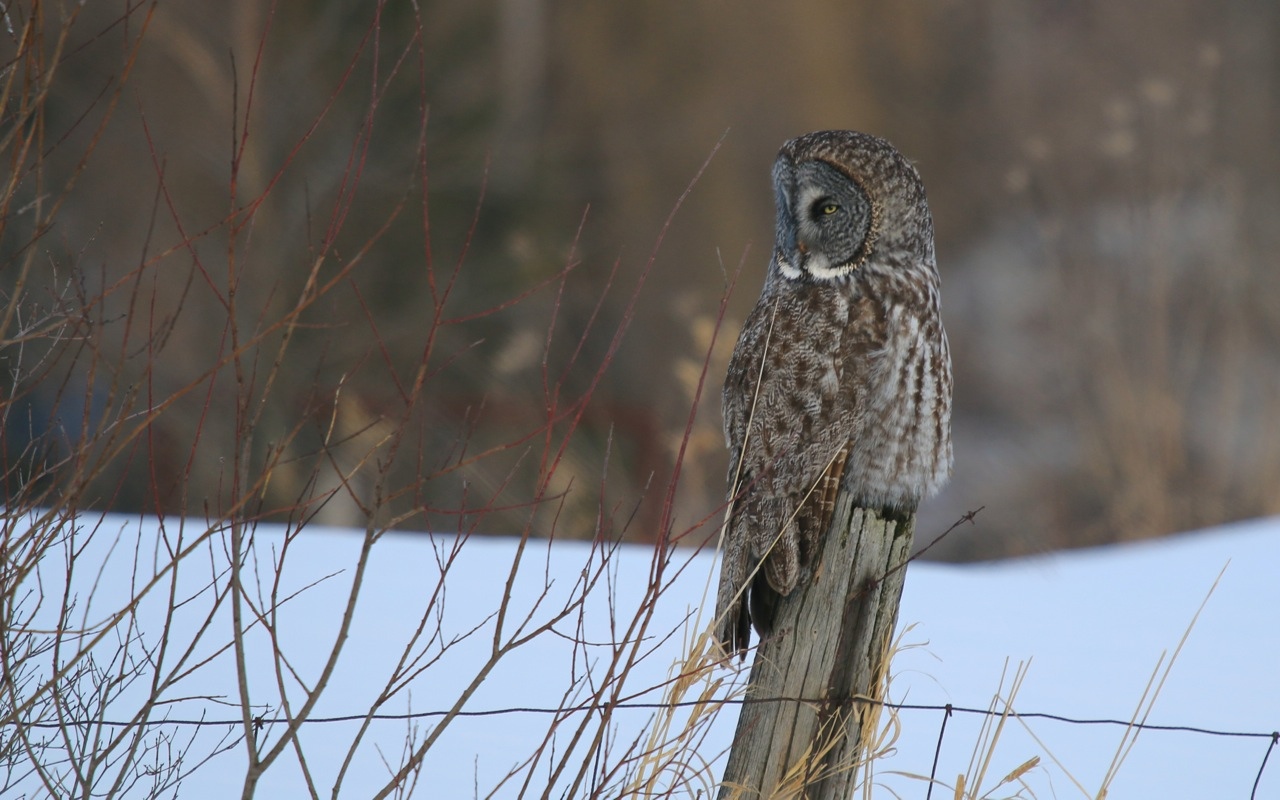 Why do these beautiful owls leave their northern forest homes and come south?  Probably, food.  Last year we had a big three day ice storm here in Ontario, the ice then got covered in a thick layer of snow that stayed all winter.   Conditions were tough for many wild animals and birds.  Most likely this owl came south in search of better hunting grounds.    The fields on my road are full of rodents. 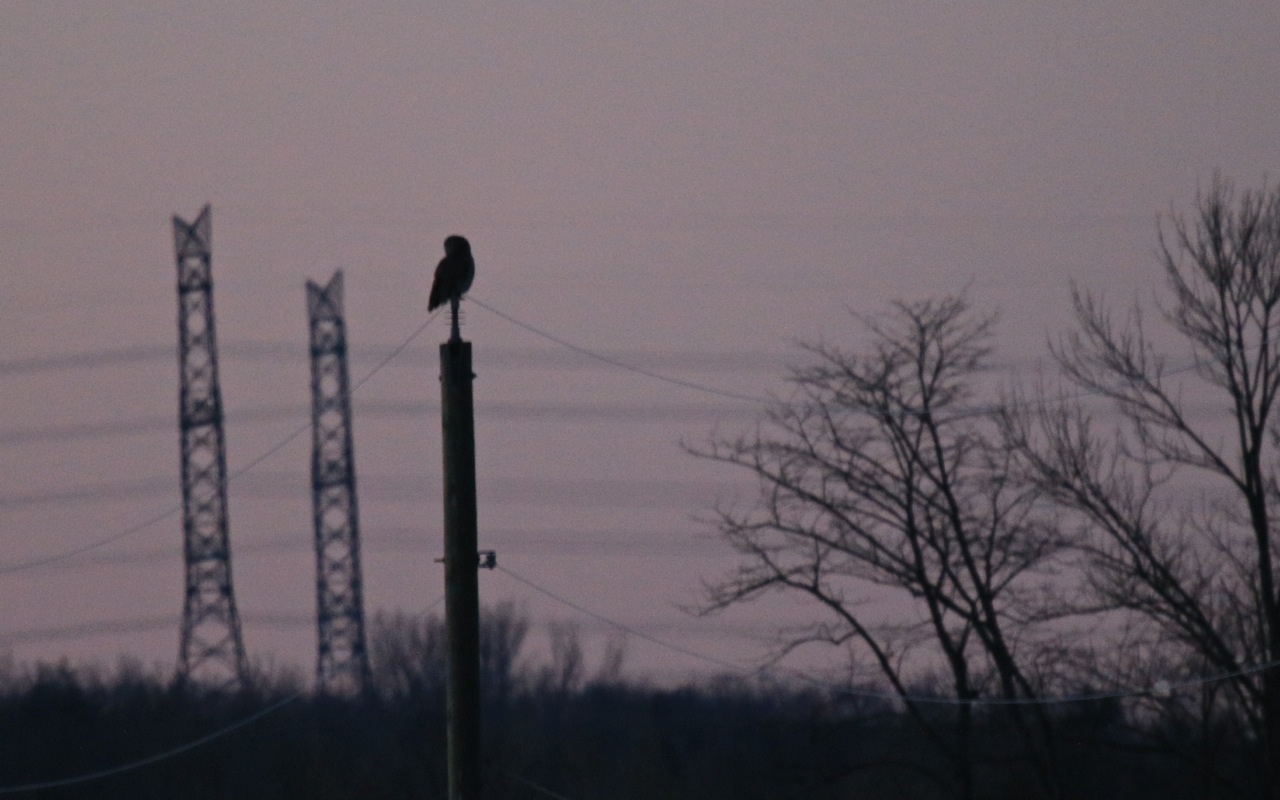 Once I knew the owl was hanging around it was so exciting because each day had potential.    Every morning when I would drive to work, I would look for the owl.   In the evening when I walked my dog, I would look again.   Sure, most of the time it wasn’t there (or I missed it!)  but every once in a while I had a sighting. 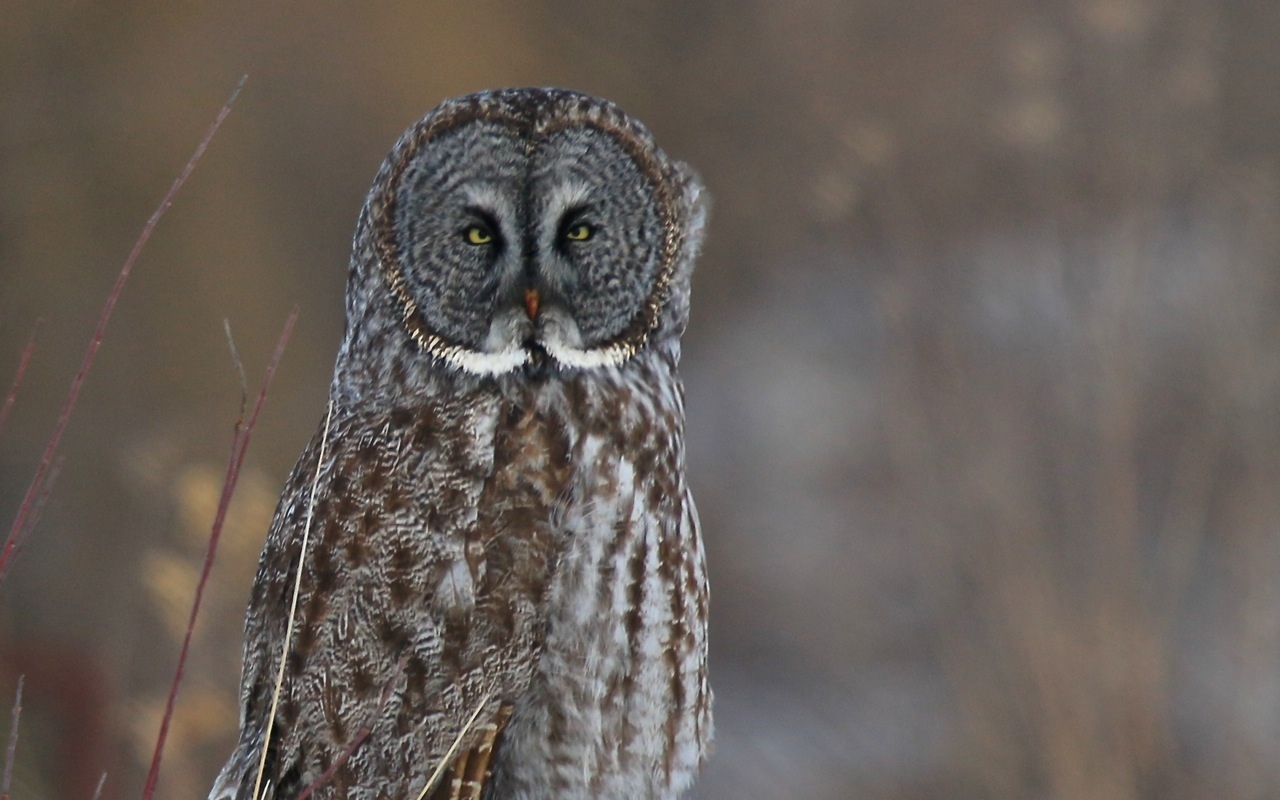 I had some real treats, too.  One morning I was in my housecoat drinking coffee and I heard the crows going crazy outside in my driveway.   The crows hate owls and often mob them, so I knew I had to get out and see what was going on as fast as I could.   I threw on my winter coat and boots and went out the front door, just in time to see the Great Gray Owl swoop across my driveway, pursued by about 6 angry crows.   It landed on a nearby fencepost, so I sat myself down in a snowbank and hung out and watched it. It watched me a bit too! 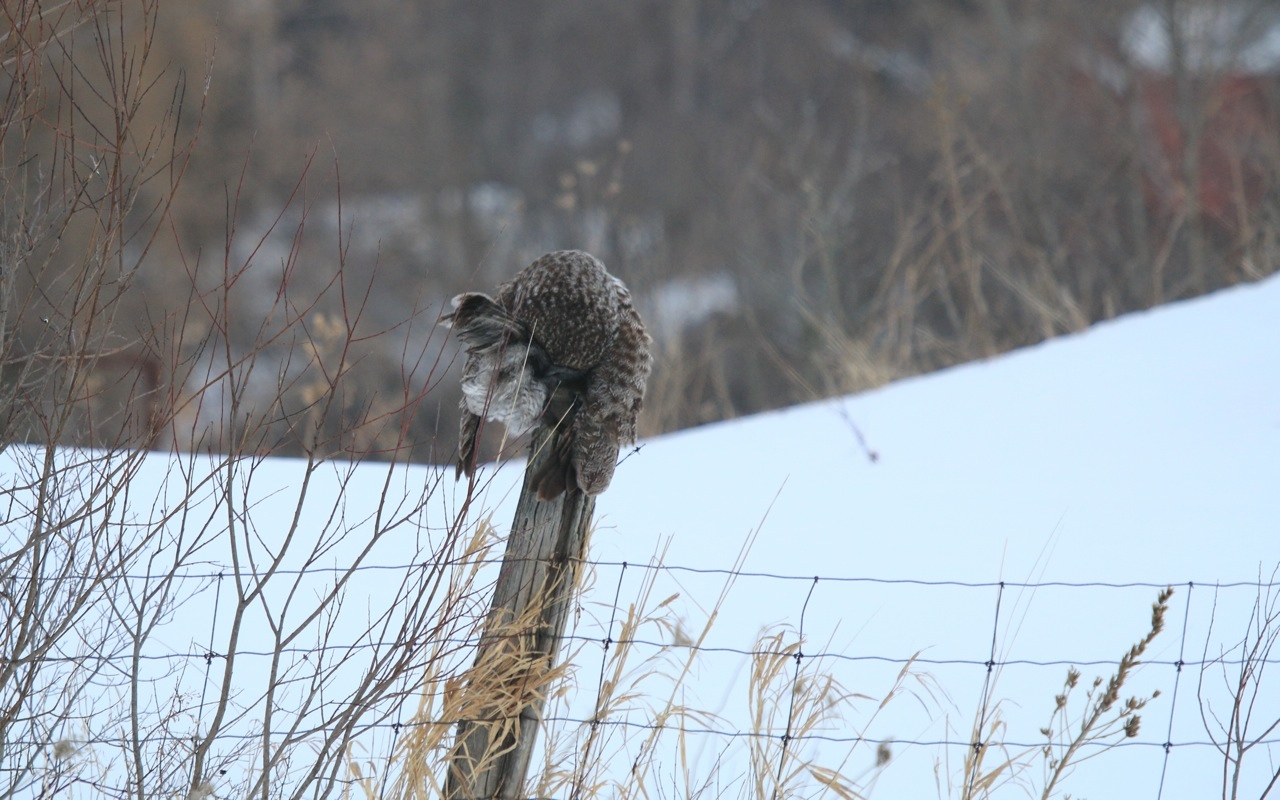 But mostly it just preened its feathers and slept.  Great Gray Owls don’t view humans as a threat, and generally don’t fly away if they see you.   Most of my neighbours had stories about the owl sitting calmly watching them do some human activity, like unloading their pickup trucks or shovelling their driveways. 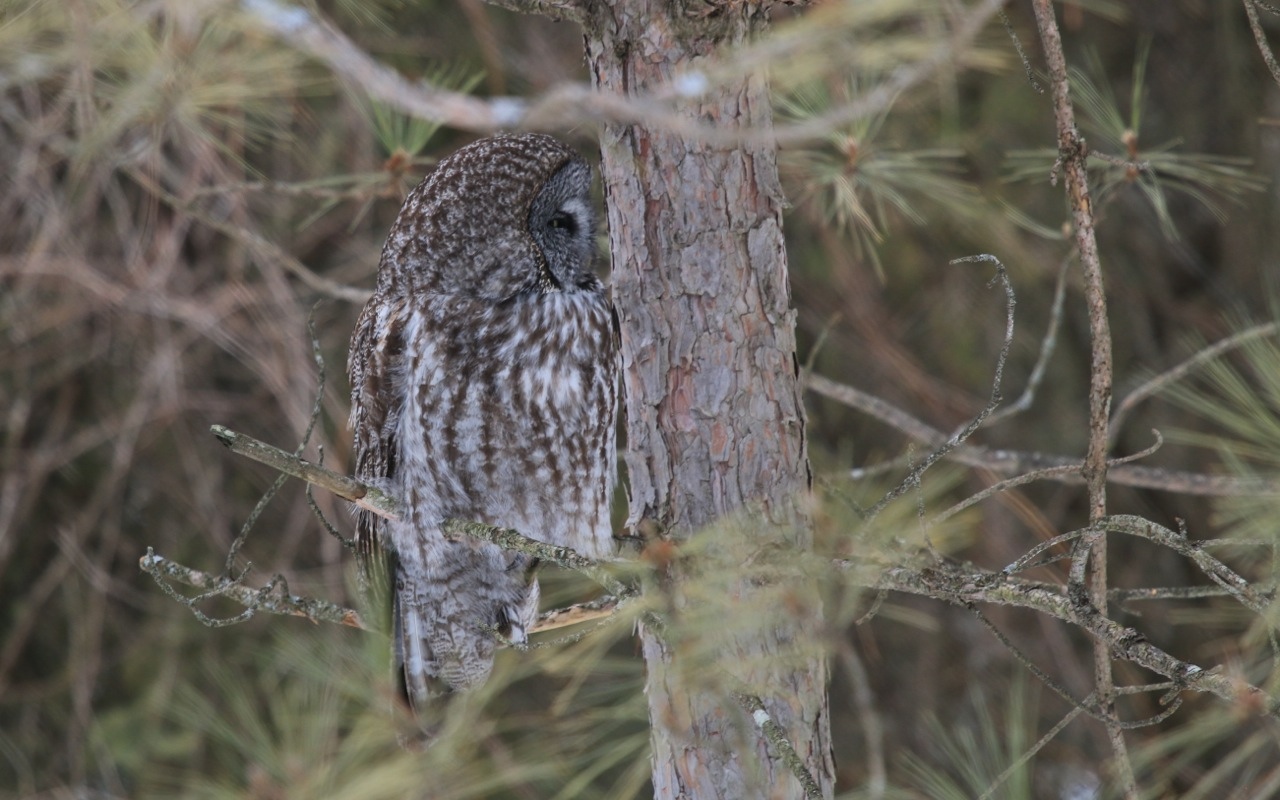 Another treat came a couple of weeks later, when I went out into my back garden to fill the bird feeders, like I do every morning.   The owl was roosting in a pine tree at the back of my garden.   Unbelievable !  It stayed in my garden all day. 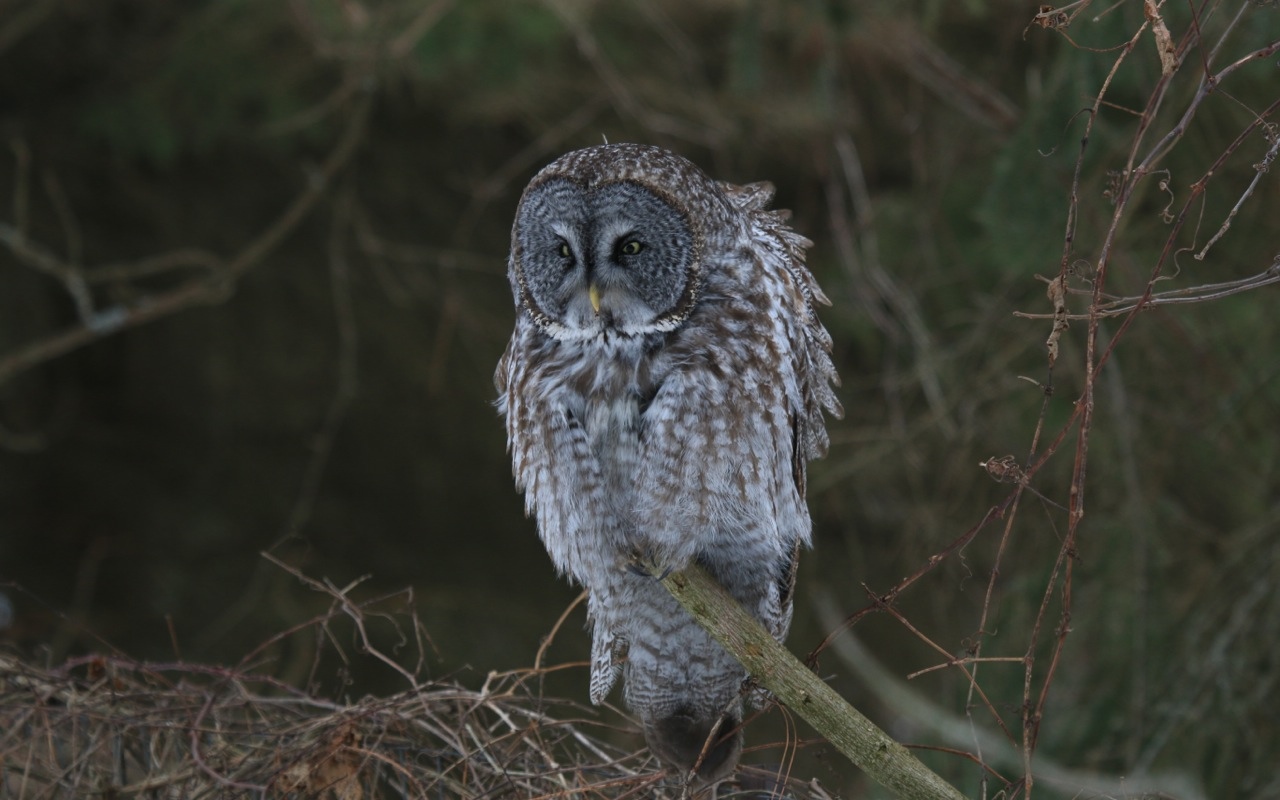 Later in the afternoon it flew to a branch  on the fence at the side of my garden and did some squirrel watching !  I am glad I’m not a squirrel. 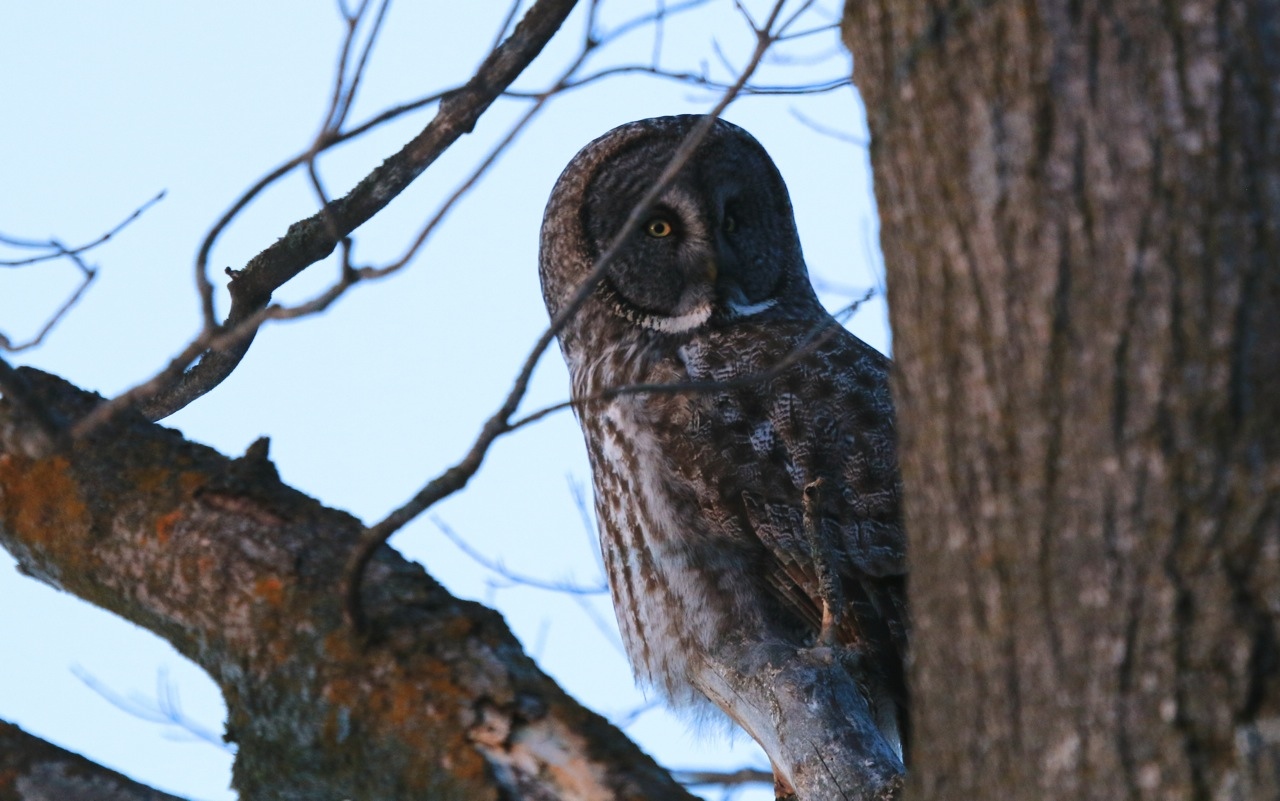 Walking my dog in the evening, there was always the chance that I would see the owl.   And I did- many times. 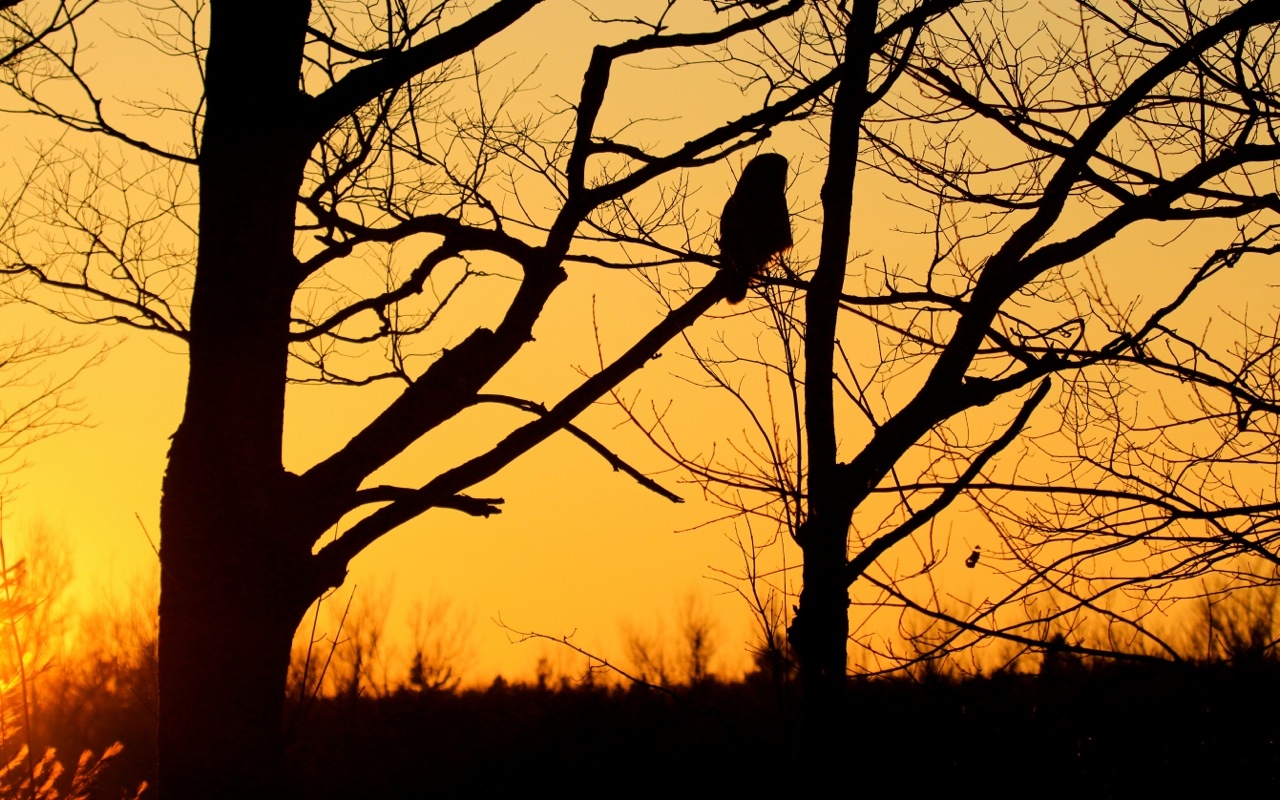 Sunset was the best time. 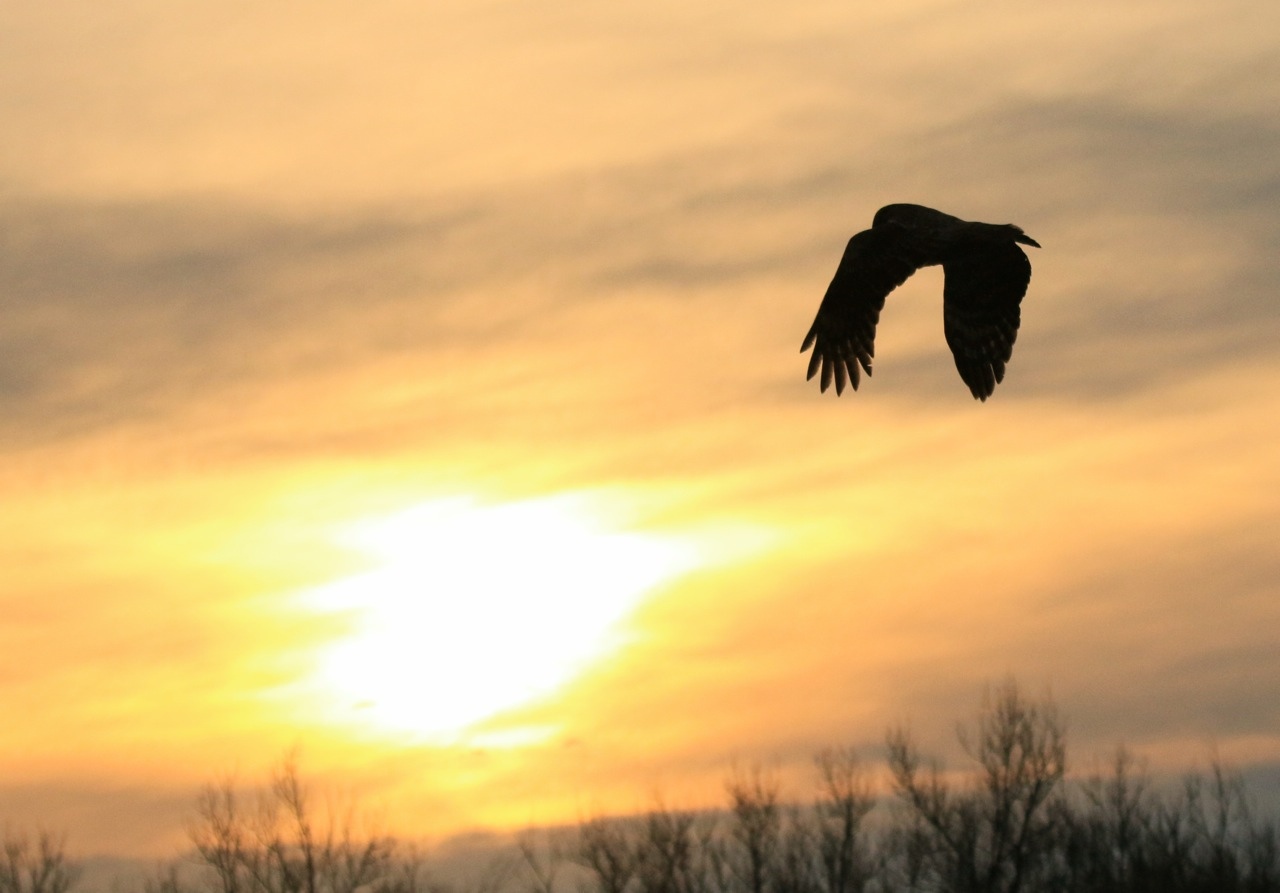 This winter, the Great Gray Owl has not returned.   This most likely means it has been able to find food enough in its home territory to sustain it through the winter.   And that’s the way it should be.