Well, who is this fuzzy little creature? 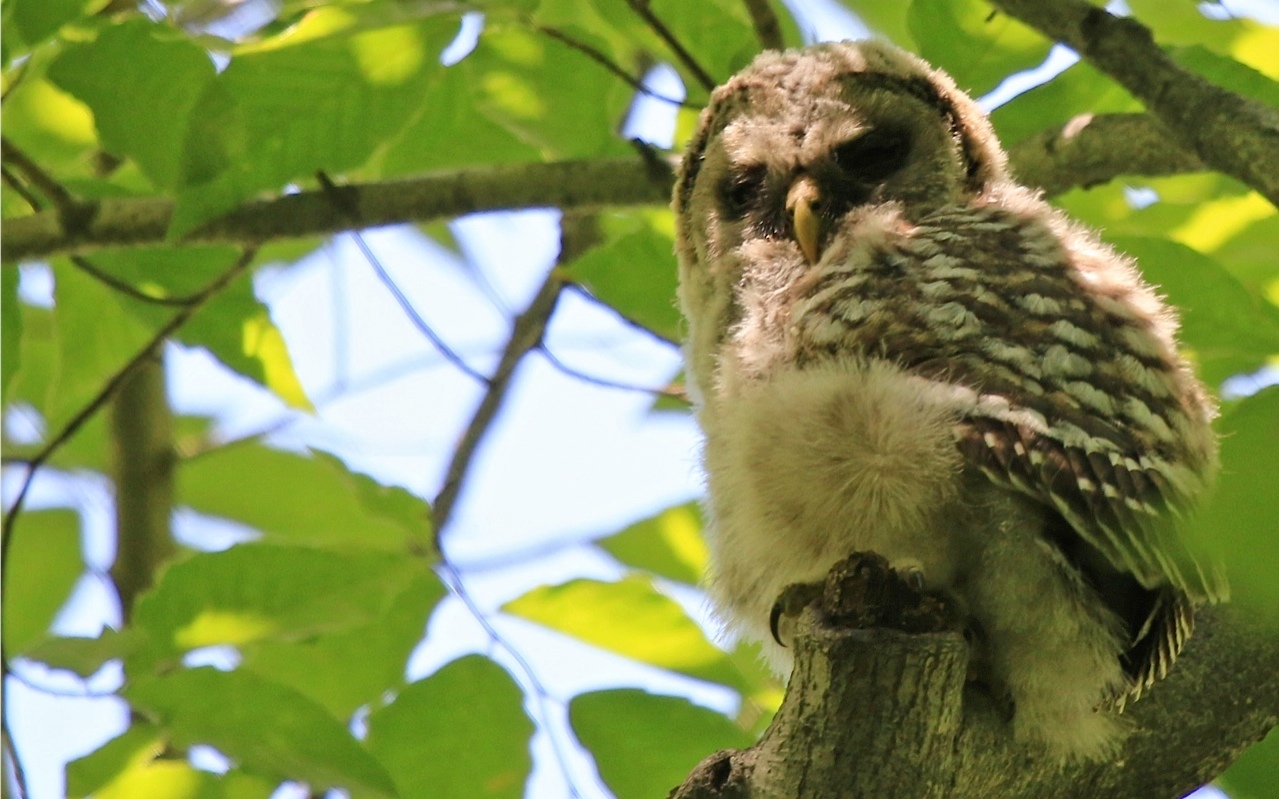 I’m pretty fluffy and cute, but look at my talons!

Yes, it’s that time of year again- time for the Barred Owlets to leave the nest and venture out on their own. 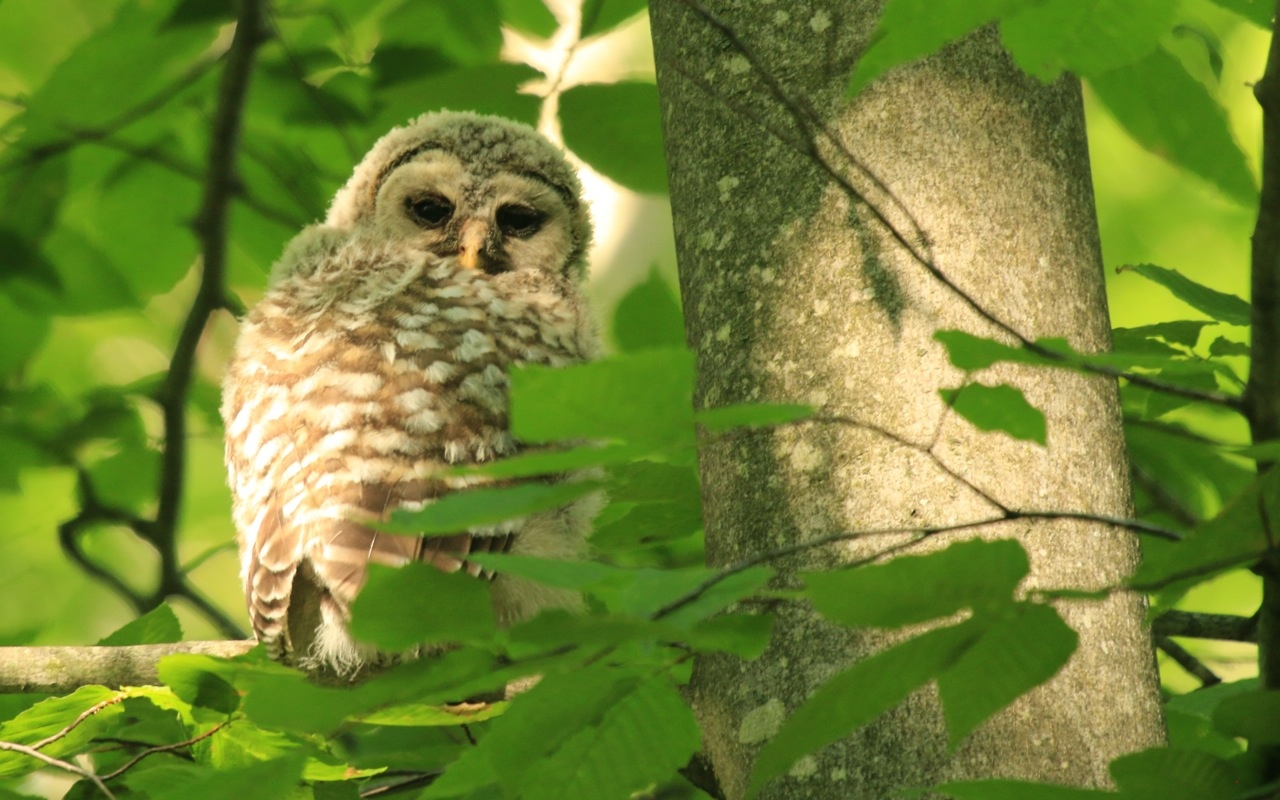 When owlets come down from their nest, and climb up into the nearby trees they are called “branchers.”   They just crawl around the branches with their talons and beaks, flapping their wings.   They will learn to fly little by little, first by flapping and hopping from one branch to another one nearby, and then flying and gliding short distances on their own. 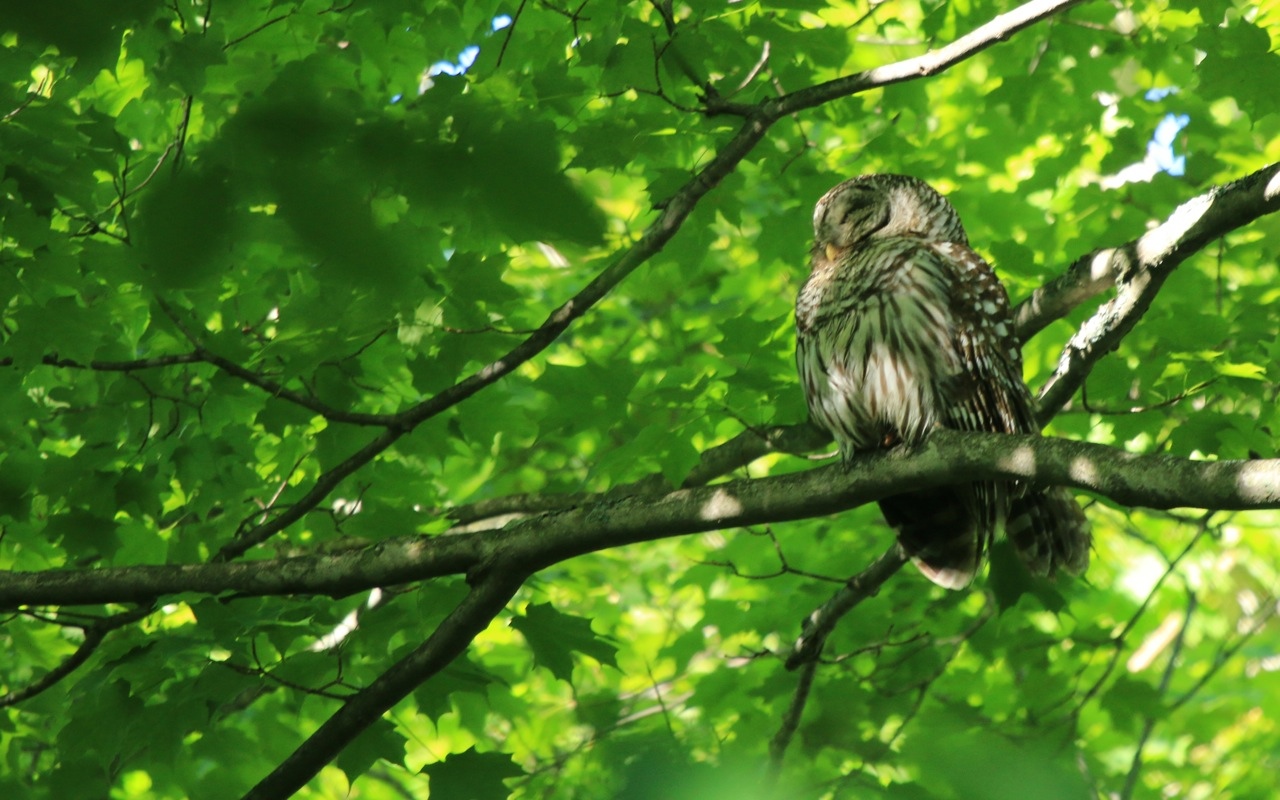 Mama owl seems pretty glad to be off her nest, and spends a lot of time sleeping high up in the treetops. Papa owl does a lot of the hunting so he is out and about.   He often brings his prey to the female, and she goes and feeds the babies. The female calls to the male with high rising call, telling him where she is so he can bring her food.   To hear this call, click this link to Barred Owl calls, then choose “female solicitation call.”   The Adult Barred Owls make a wide variety of sounds, which can be listened to on this page from Cornell Lab of Ornithology.    It gives me a thrill every time I hear them vocalizing near me in the woods. 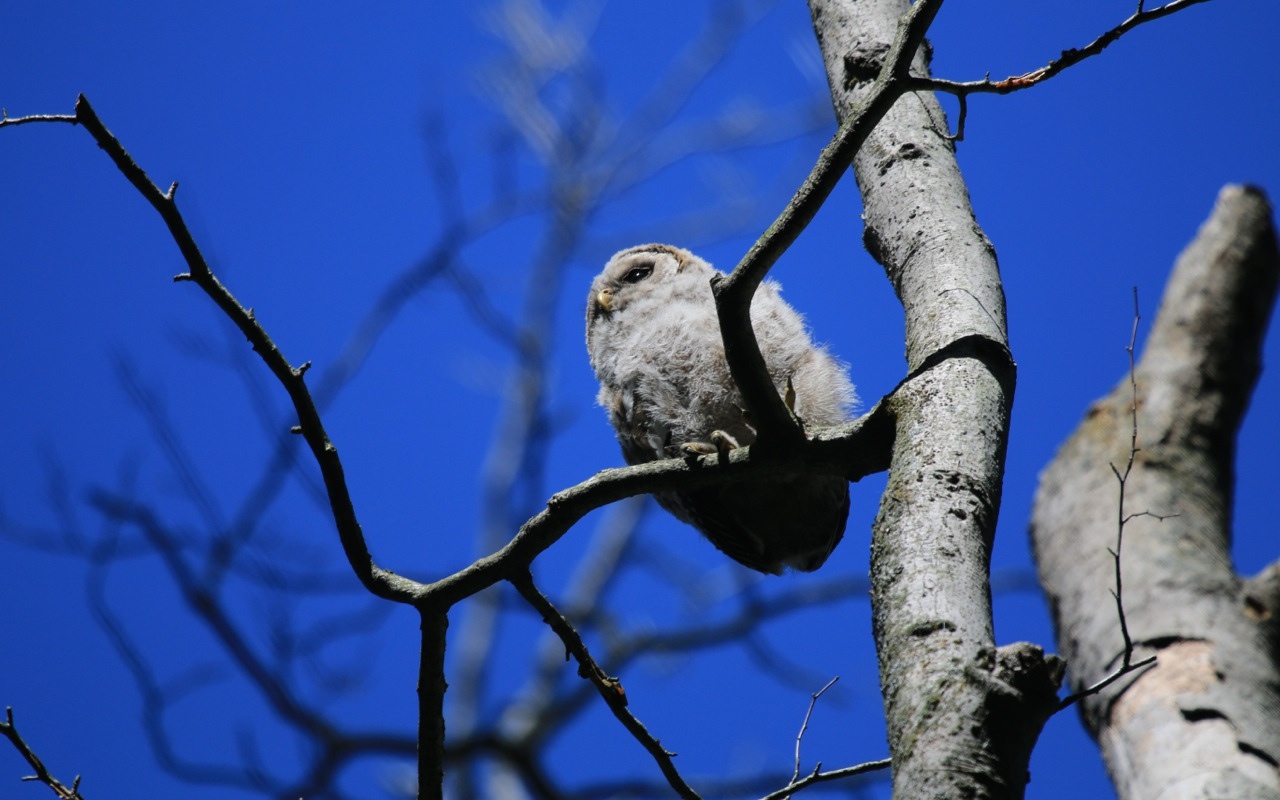 The little owlets crawl surprisingly high up into the tops of the trees!  I can only find them by listening for their sound, a high pitched hoarse little screech, then pinpointing where it is coming from.  To hear what their screech sounds like, follow the link and choose “fledgling begging calls.” 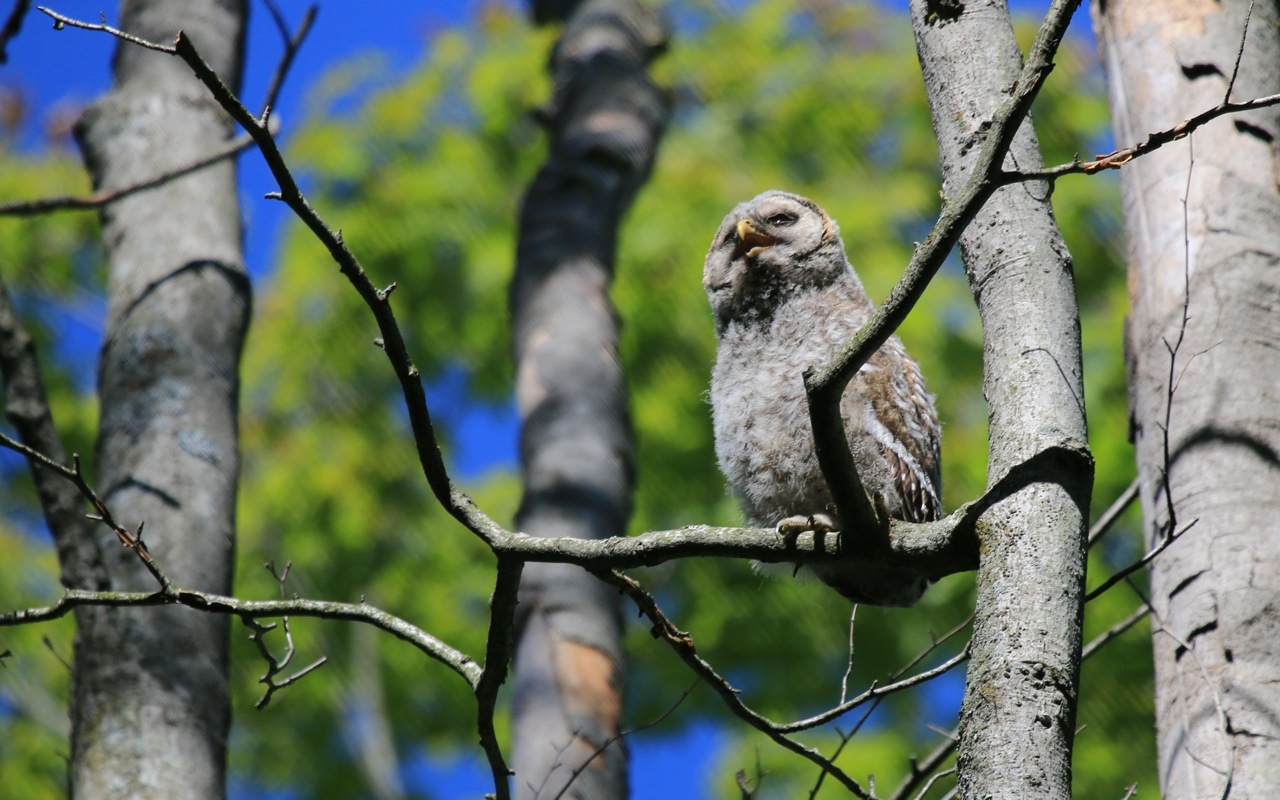 The owlets tend to find an exposed branch from where they can screech for food and watch for their parents.    It gets pretty hot up there, so I often see them panting.   When their parents come, it is often accompanied by a great deal of hooting and screeching from all members of the family. 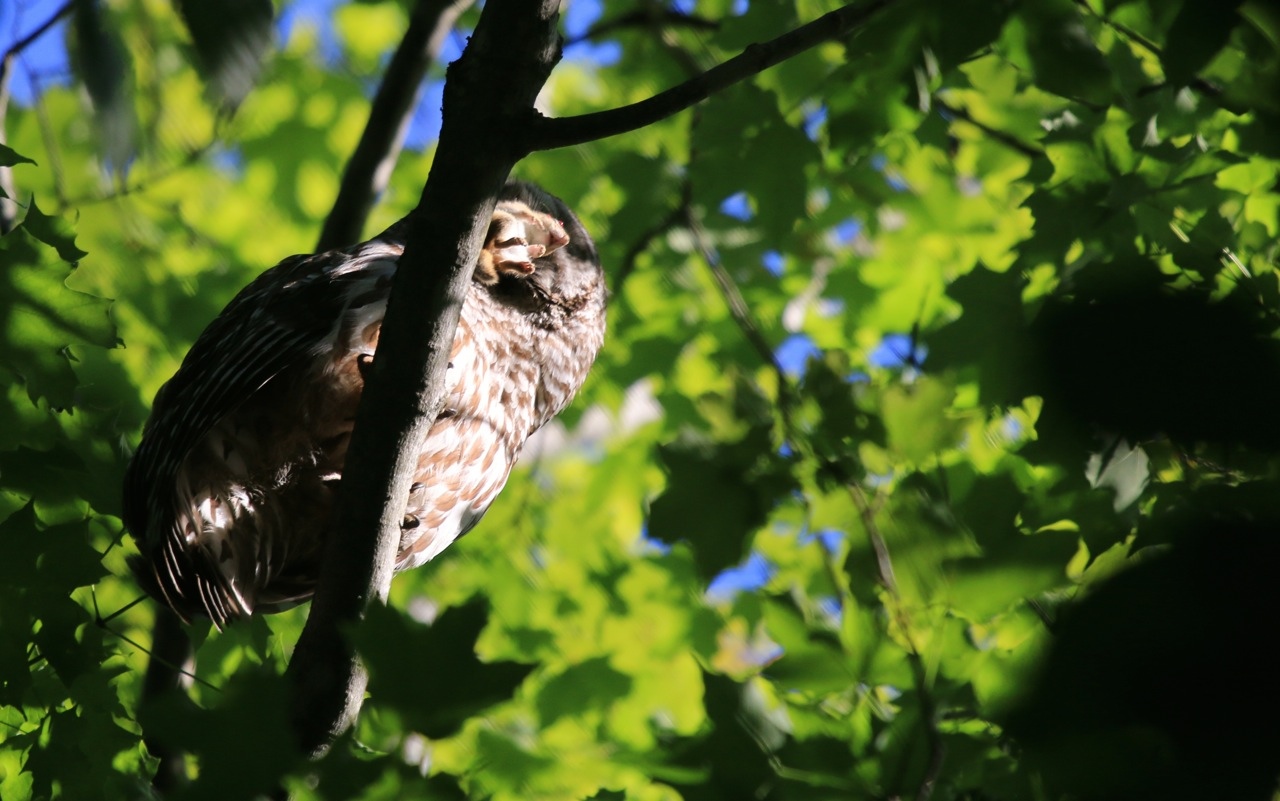 Here’s Papa Owl, high above in the treetops, coming with dinner for one of the owlets.      Even at this small size, the owlets can swallow a chipmunk whole. 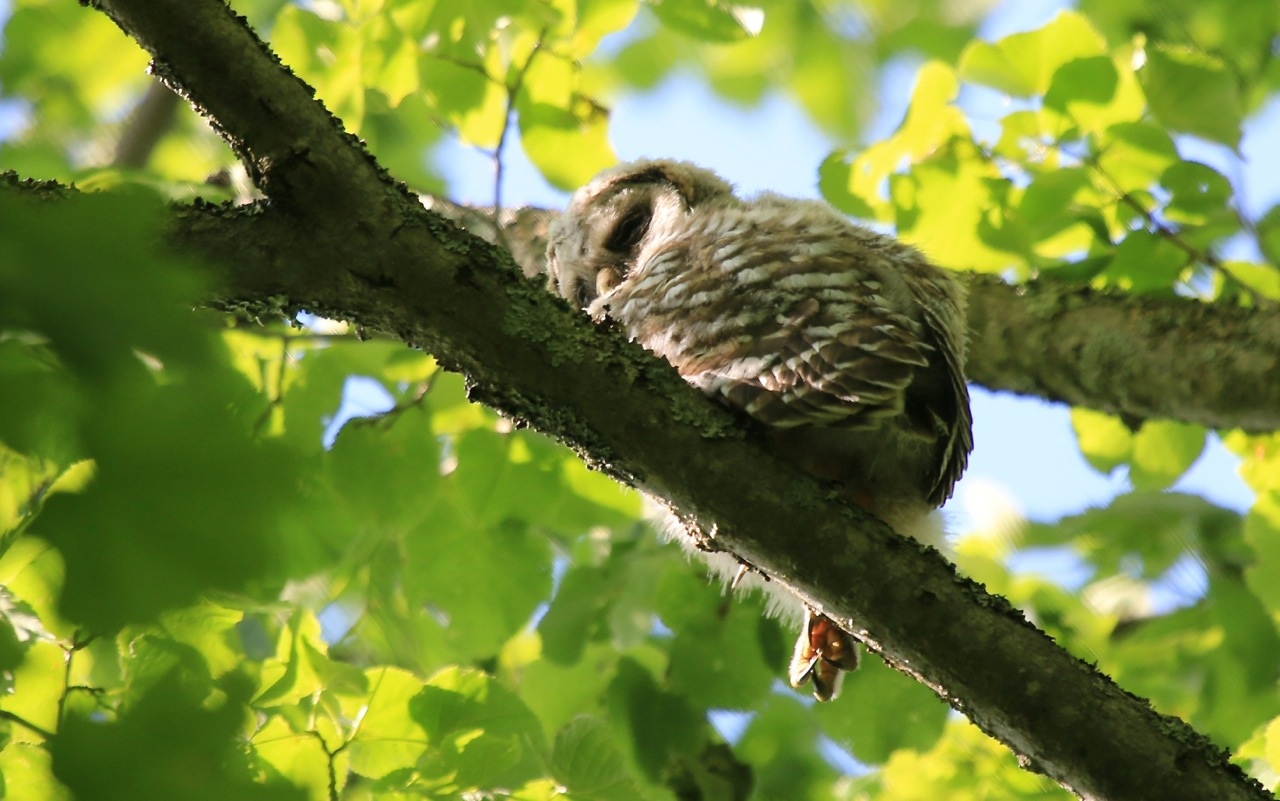 After eating, time for a nap!

I can’t believe how funny this little owlet is with its leg dangling off the branch.   Talk about relaxed! 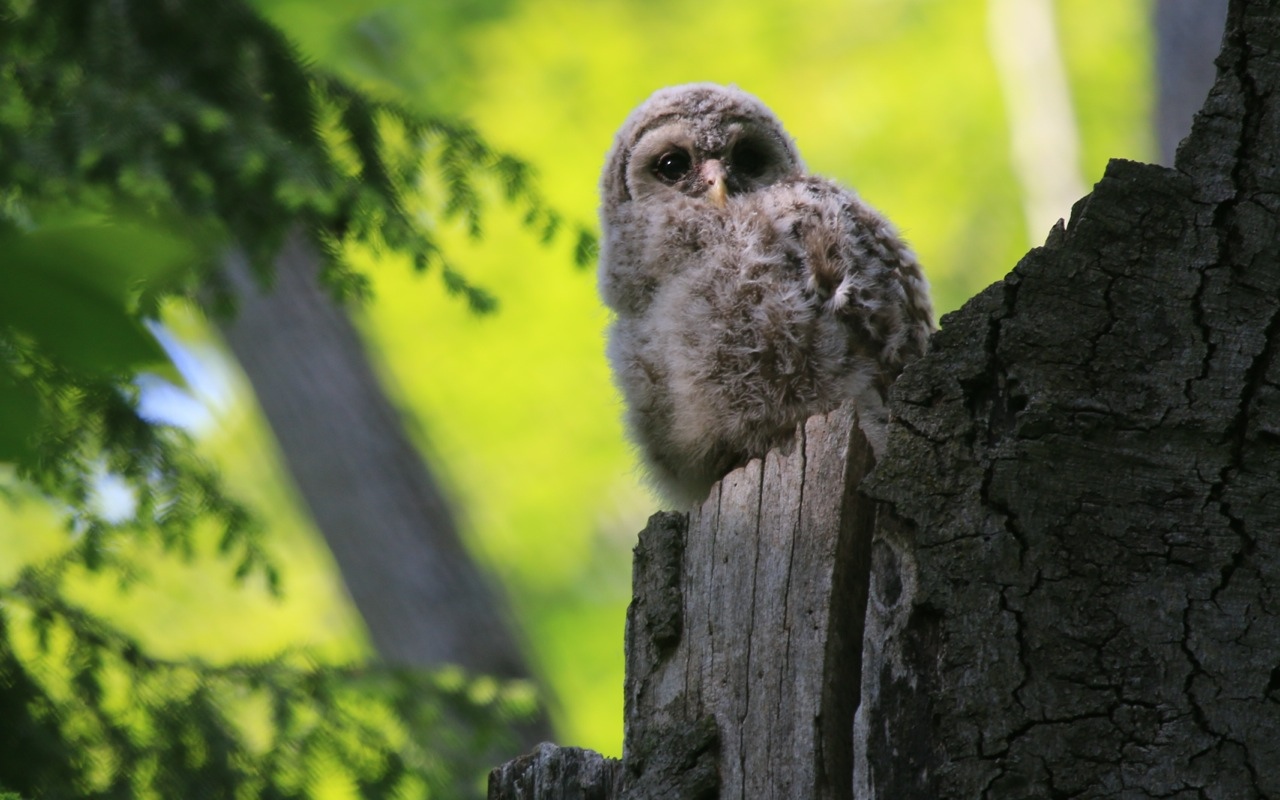 And then there were three.

One night I was out in the woods and found a third owlet, still sitting on top of the nest tree.   It flapped its wings and teetered a bit on the edge of the tree, then went back down into the nest.  Eventually this little owl found its way down and climbed up into the forest canopy. 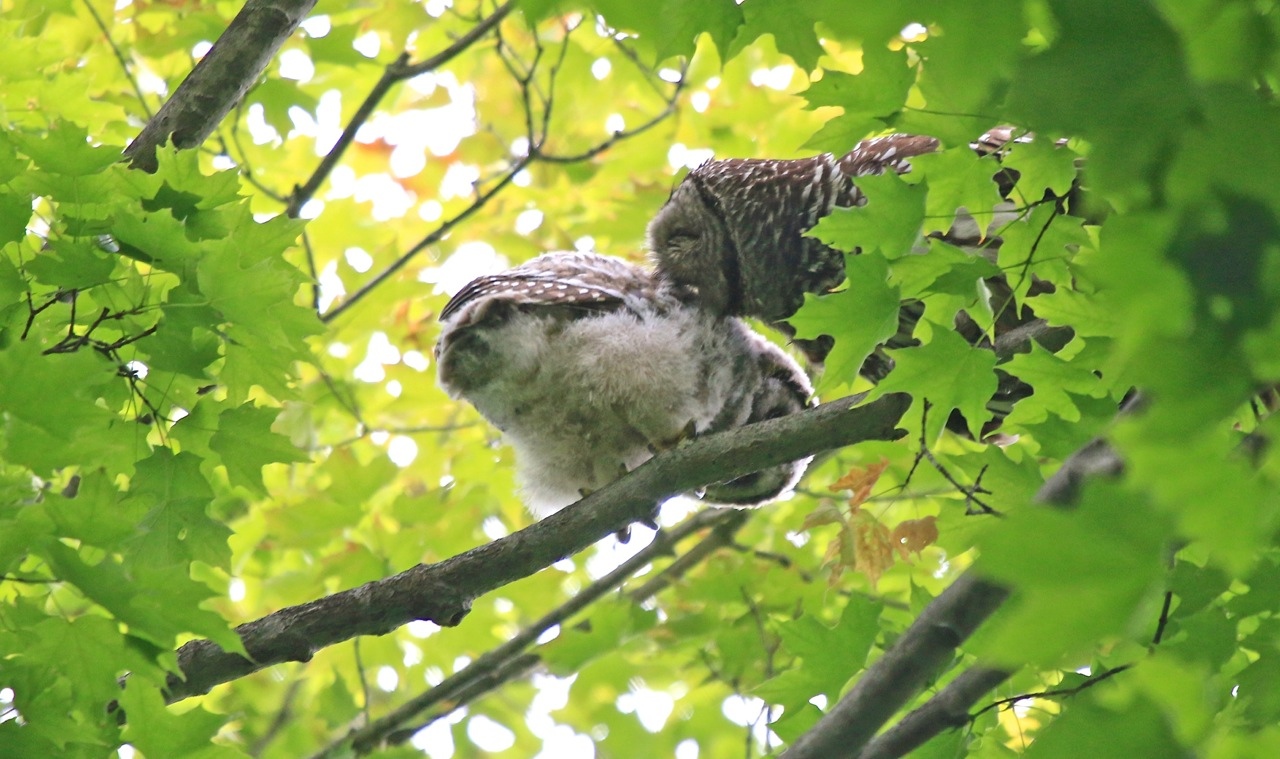 One of the last times I saw the little owls, the mother owl was sitting on a branch nearby.   She then flew over to one of the owlets.    I thought she was bringing food, but she actually went over and started preening the little one’s feathers.   It leaned into her, and preened her too. Oh my goodness.   I can’t believe I got to see that! 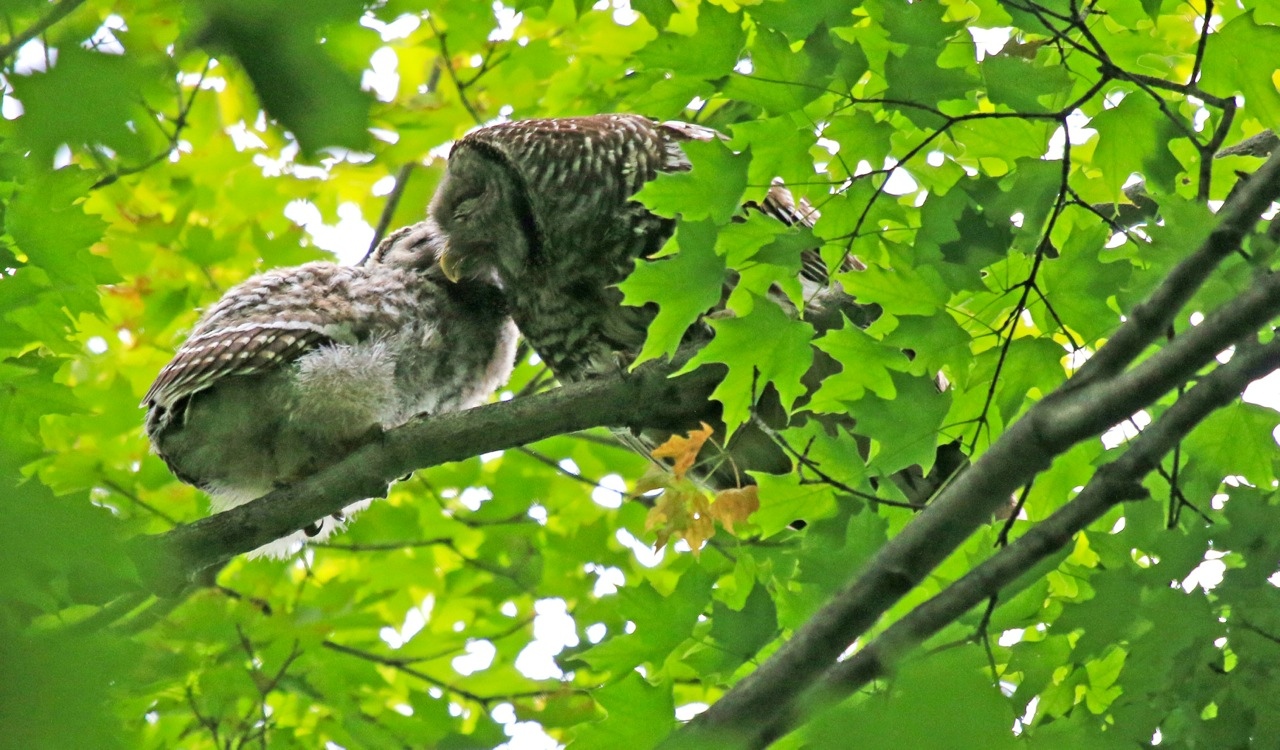 I’ll preen you too, Mama

The owlets can often be found close together, with the mother nearby.    As time goes on, it becomes harder and harder for me to find them, as they learn to fly and can cover larger distances every day. 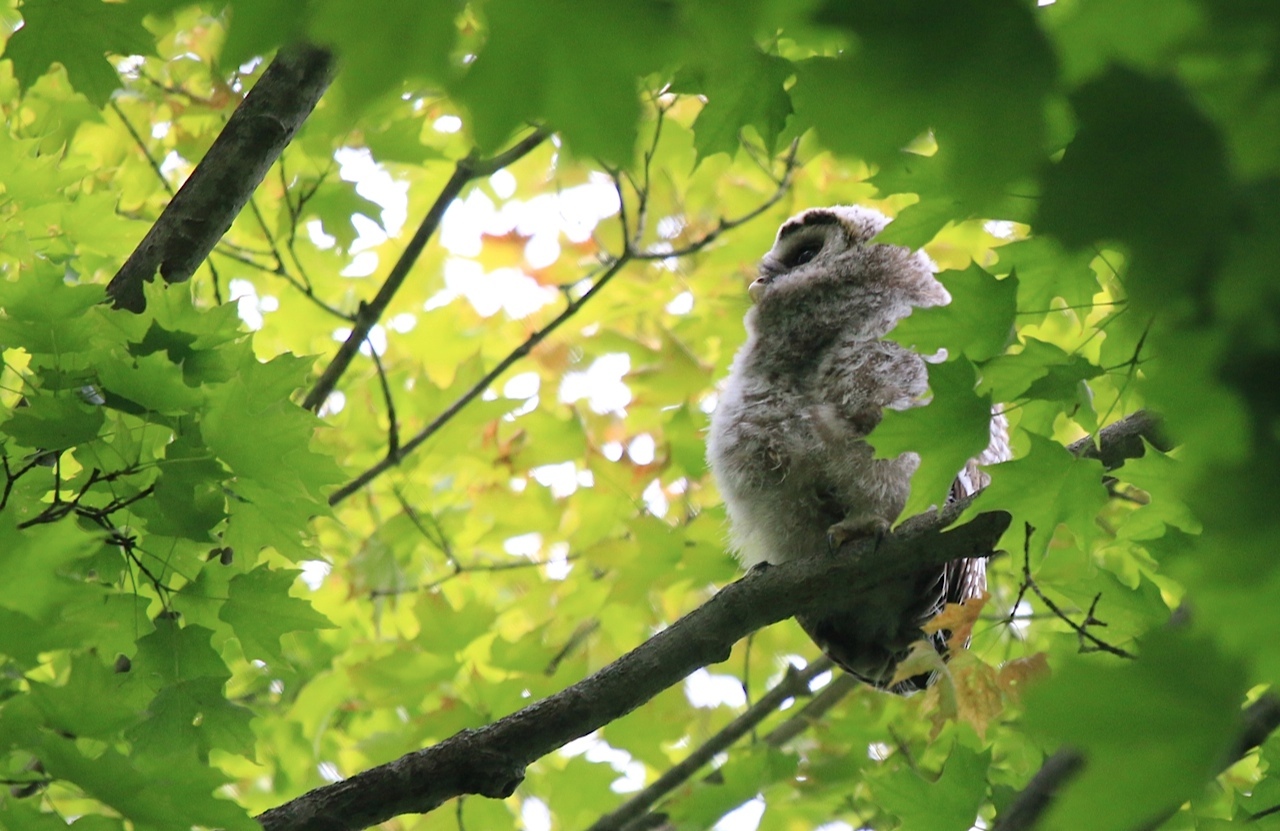 Here is a photo from one of the last times I saw the owlets.   By now they should be doing some hunting on their own, and have moved further away from the vicinity on their nest tree.

This is the second year in a row I have been fortunate enough to observe a family of Barred Owls growing up.    Sometimes, when I was out in the woods covered up from head to toe, doused in insect repellant, and not seeing or hearing a thing,  something amazing would happen and my patience would be rewarded.   That’s what it was like when I found the third owlet, and also when I got to see the mother and baby owl preening each other.    Both times, I had been just about ready to go home because I had been sitting still for so long. 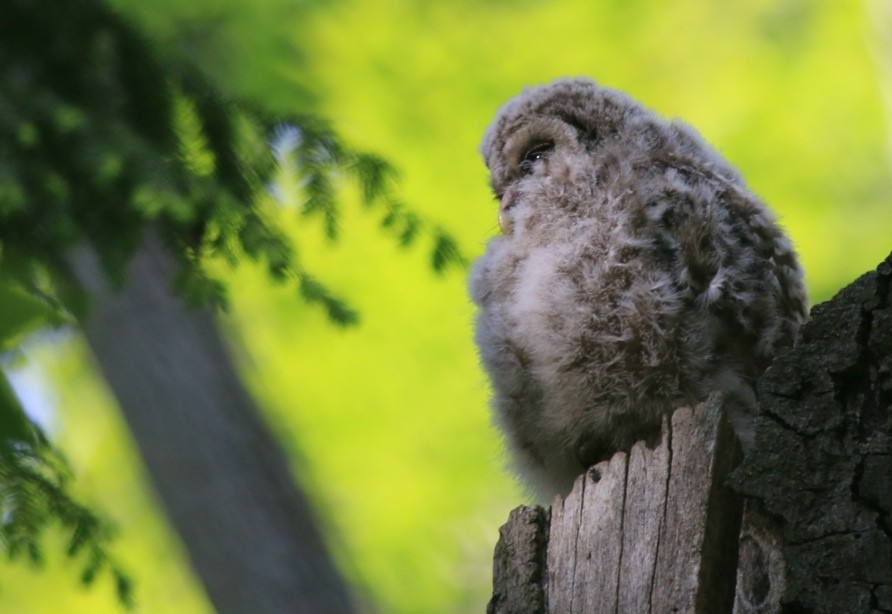 Back in the woods, it’s like I am in a secret world, and if I sit long enough that world will just carry on despite my being there.

It’s worth the wait, for sure.