It has been cold here!   Really cold!   The term the weather forecasters are using for this extended period of chilly weather is “polar vortex.”   Whatever it’s called, it does not compel me to go outside for long periods of time.   What to do?   What about a last minute boat cruise on the Frontenac 2 ferry over to Amherst Island.   I can look for owls from the warmth and comfort of my little car. 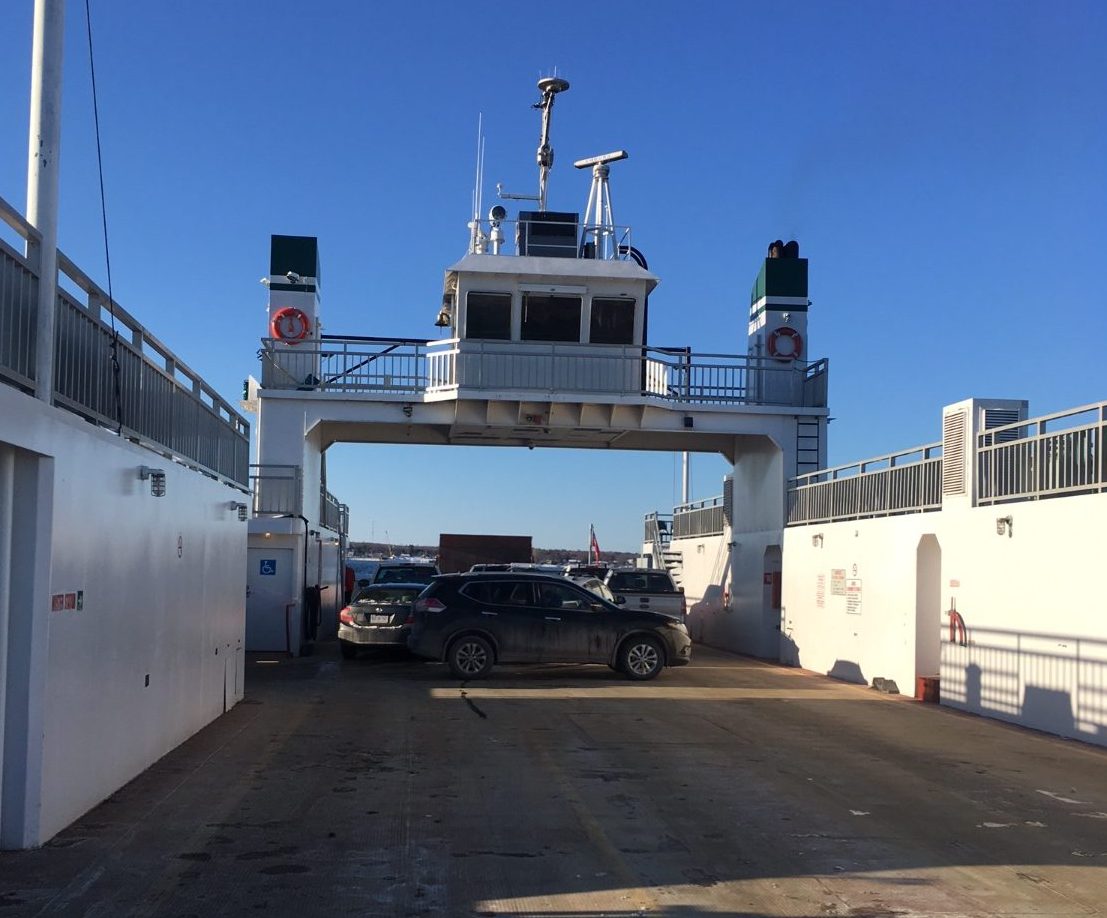 Here’s the ferry.   You can see my little Honda Civic on the left side.   The Frontenac 2 is the only ferry I know where you drive in forward, and have to back up and swing around to drive off. 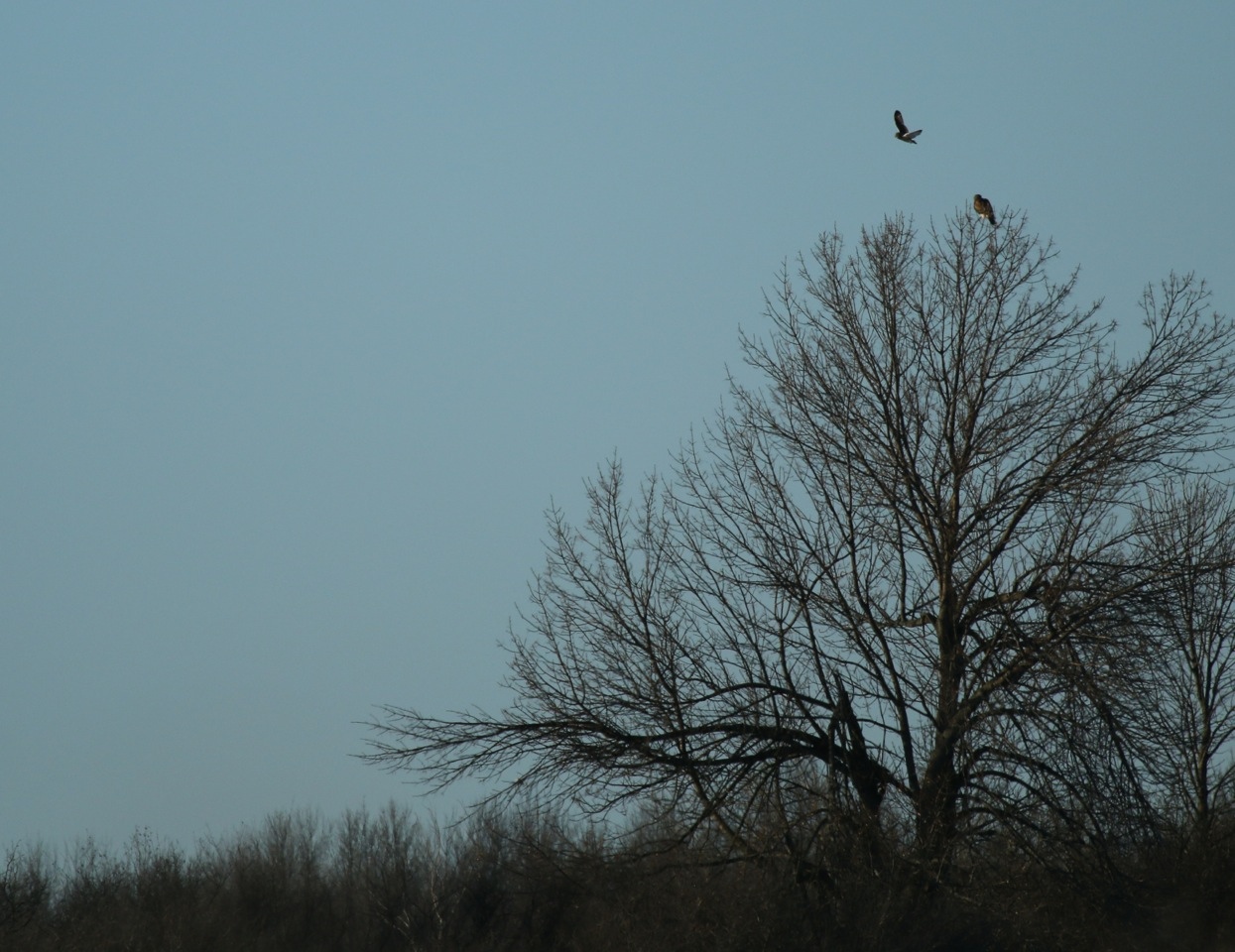 I had heard reports of numerous Short Eared Owls over on Amherst Island.  As I began to drive the island roads, I looked for any movements or shapes up in trees.   There were 2 Wild Turkeys on the road, 2 Snowy Owls very far away sitting on hydro poles above sheep farms, and this hawk sitting in a tree with some other kind of birds dive bombing it.   I got out of the car, cold forgotten, and watched these birds, hoping they were “shorties.”  I could hear them calling to each other as well.  Here’s what it sounded like.(barking sounds) 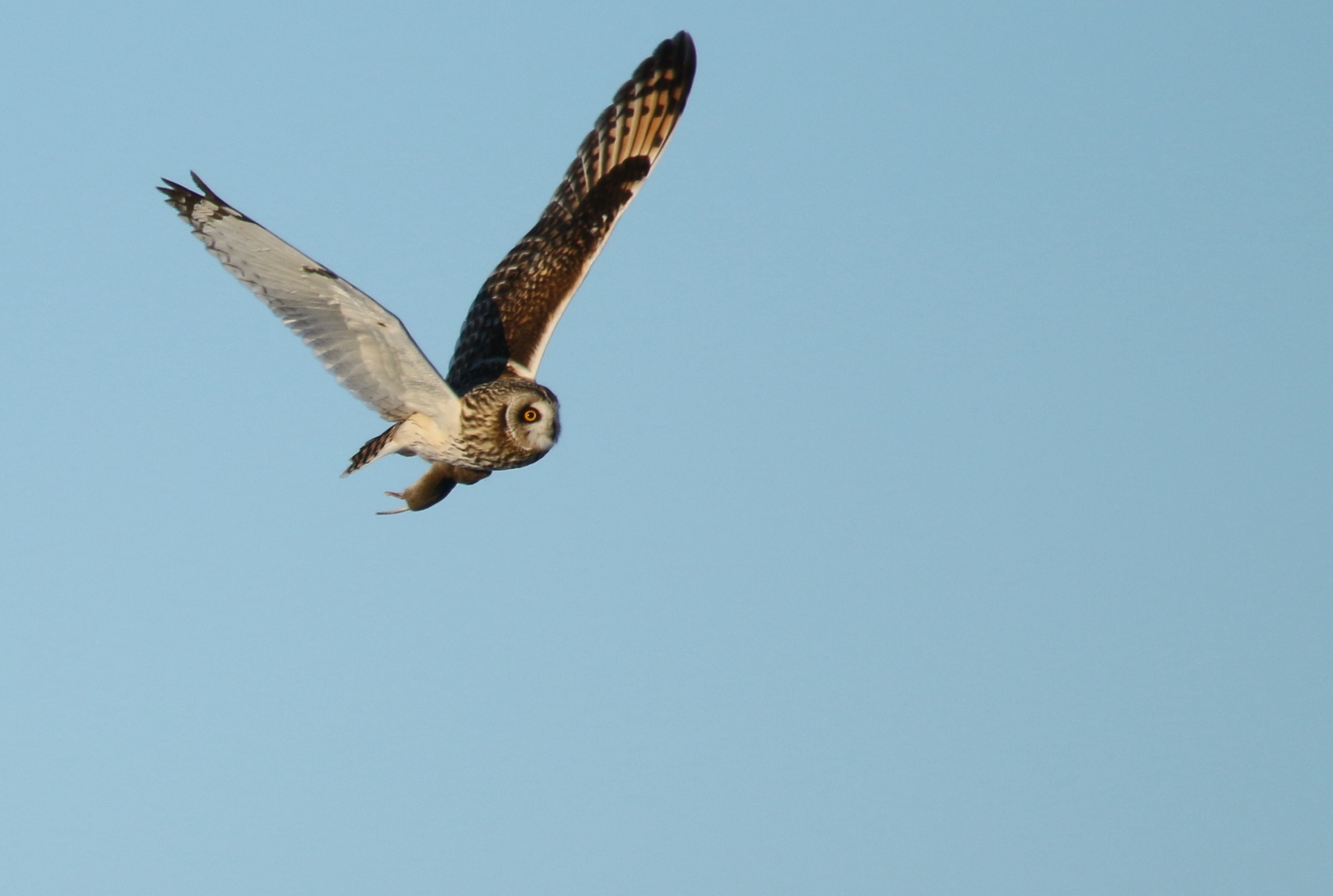 I heard a call over to my right, and all of a sudden a shortie flew right over the road past where I was standing, with prey in its talons. 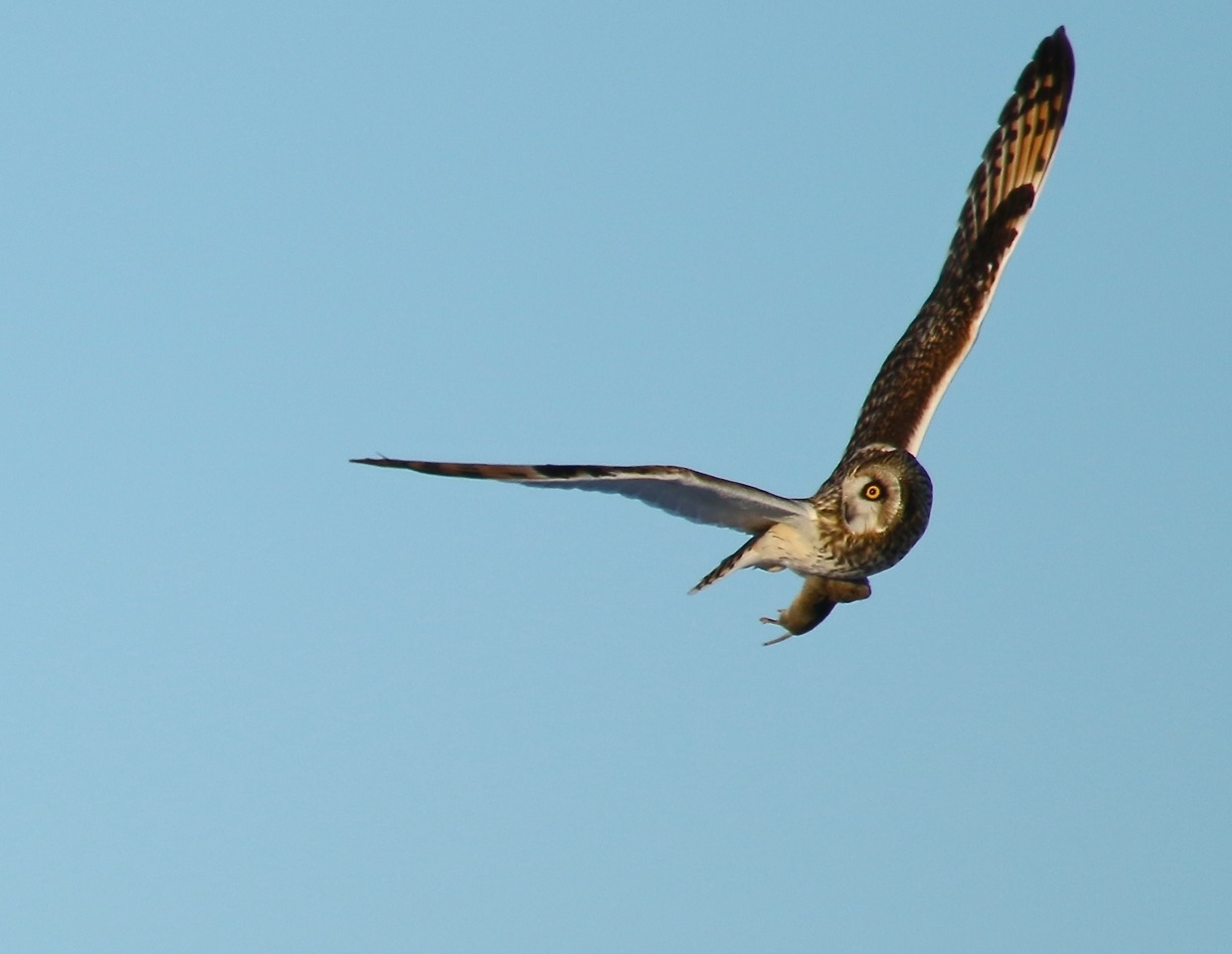 A quick look around with its piercing yellow eyes, and it flew across to eat in a big tree. 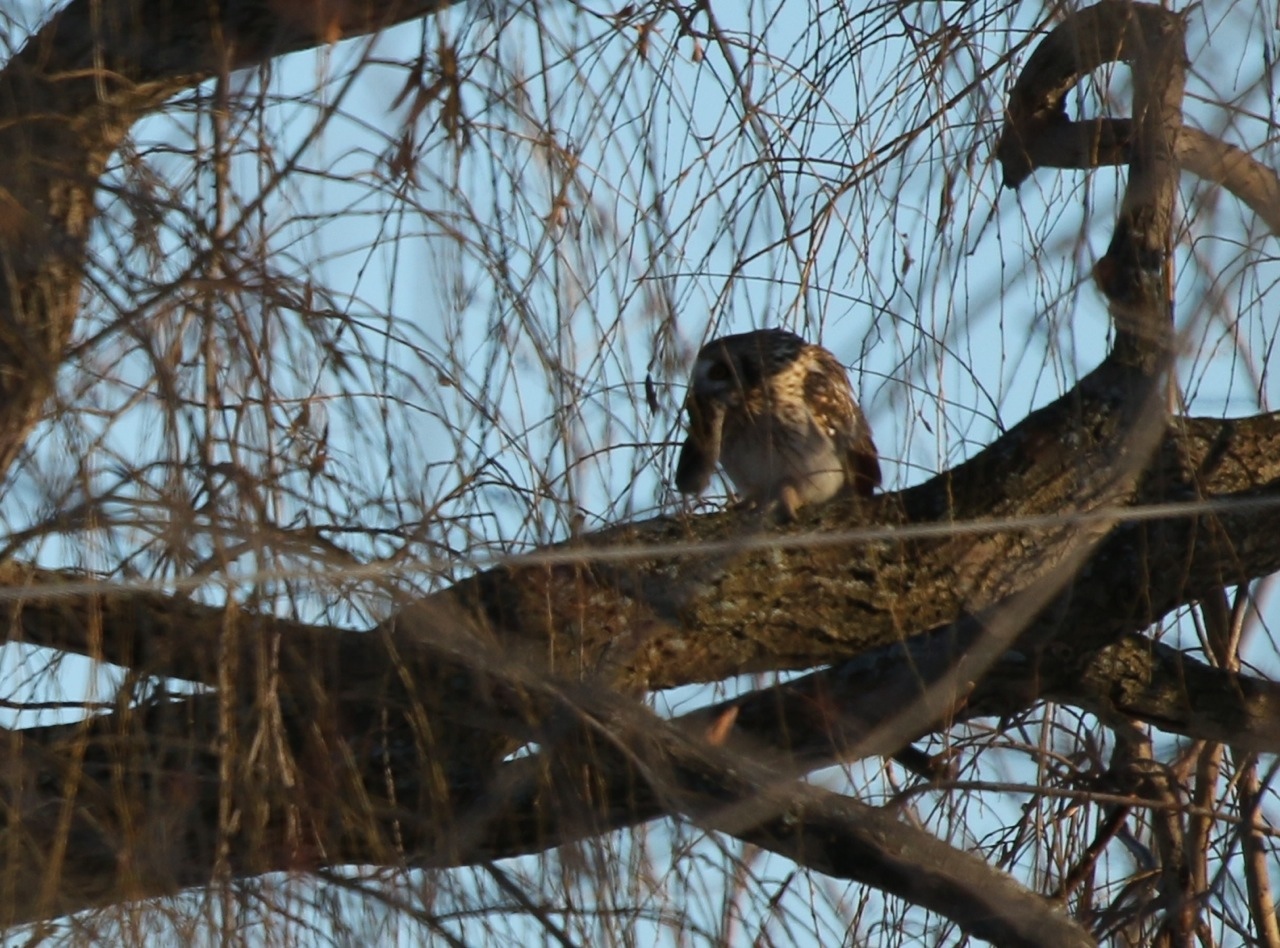 Mealtime.   As I was watching this spectacle, a couple of guys came along who told me that they had seen a short eared owl on the north side of the island.   I left this one to have its meal, and carried on. 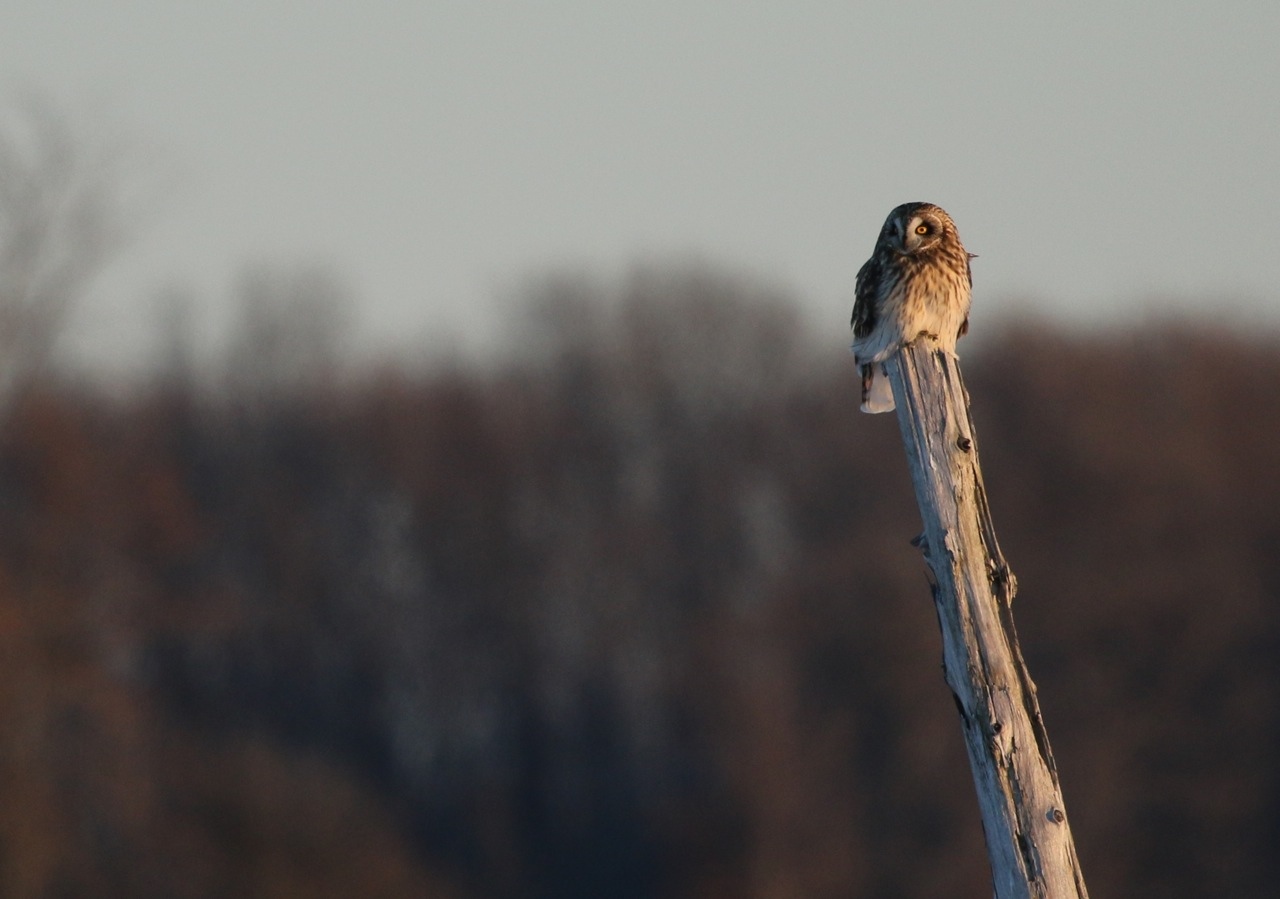 As I was driving I saw this one flying around a field and then landing on a post. 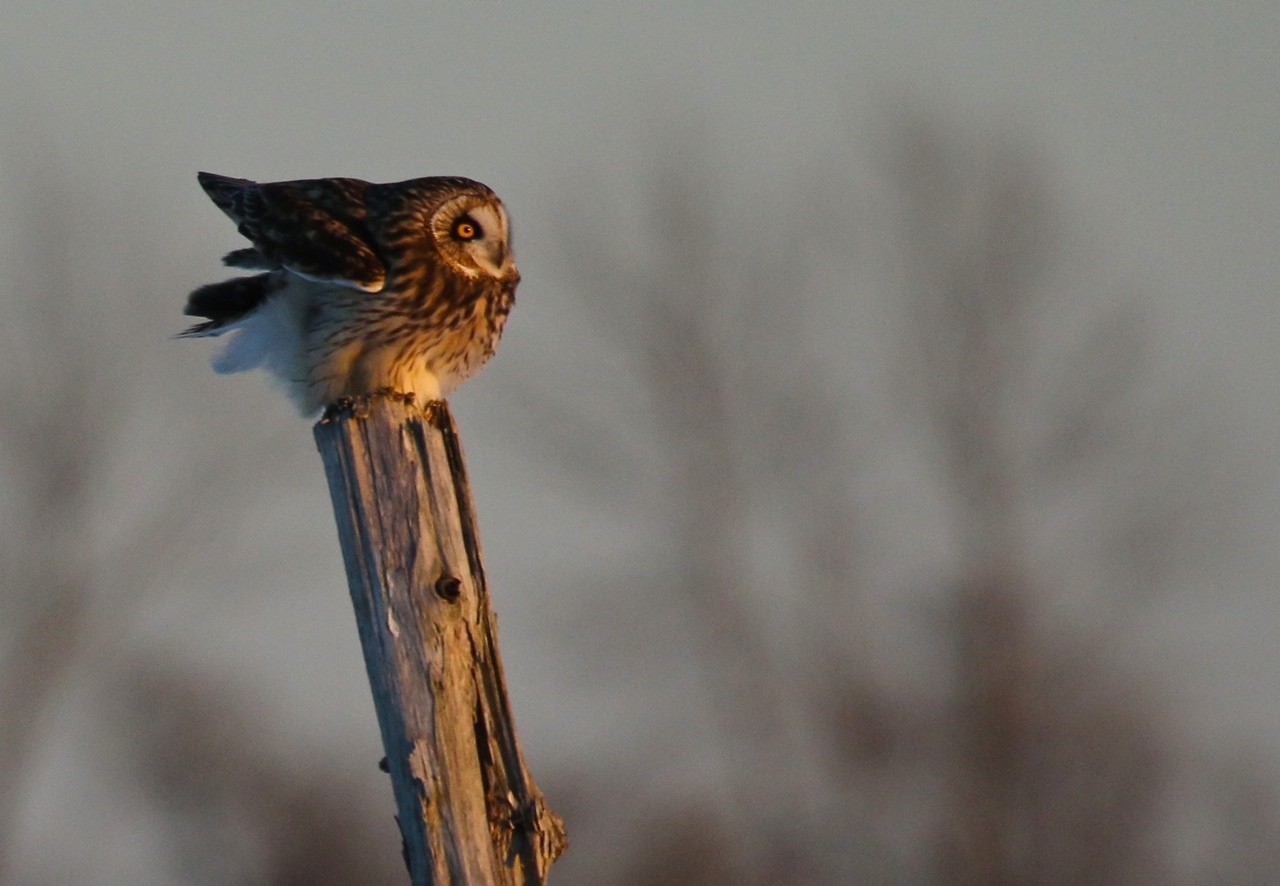 As fluffed up as it was, this owl did not seem to mind the cold at all.   Did you know that Short Eared Owls live on every continent except Antarctica?   They must be very adaptable! 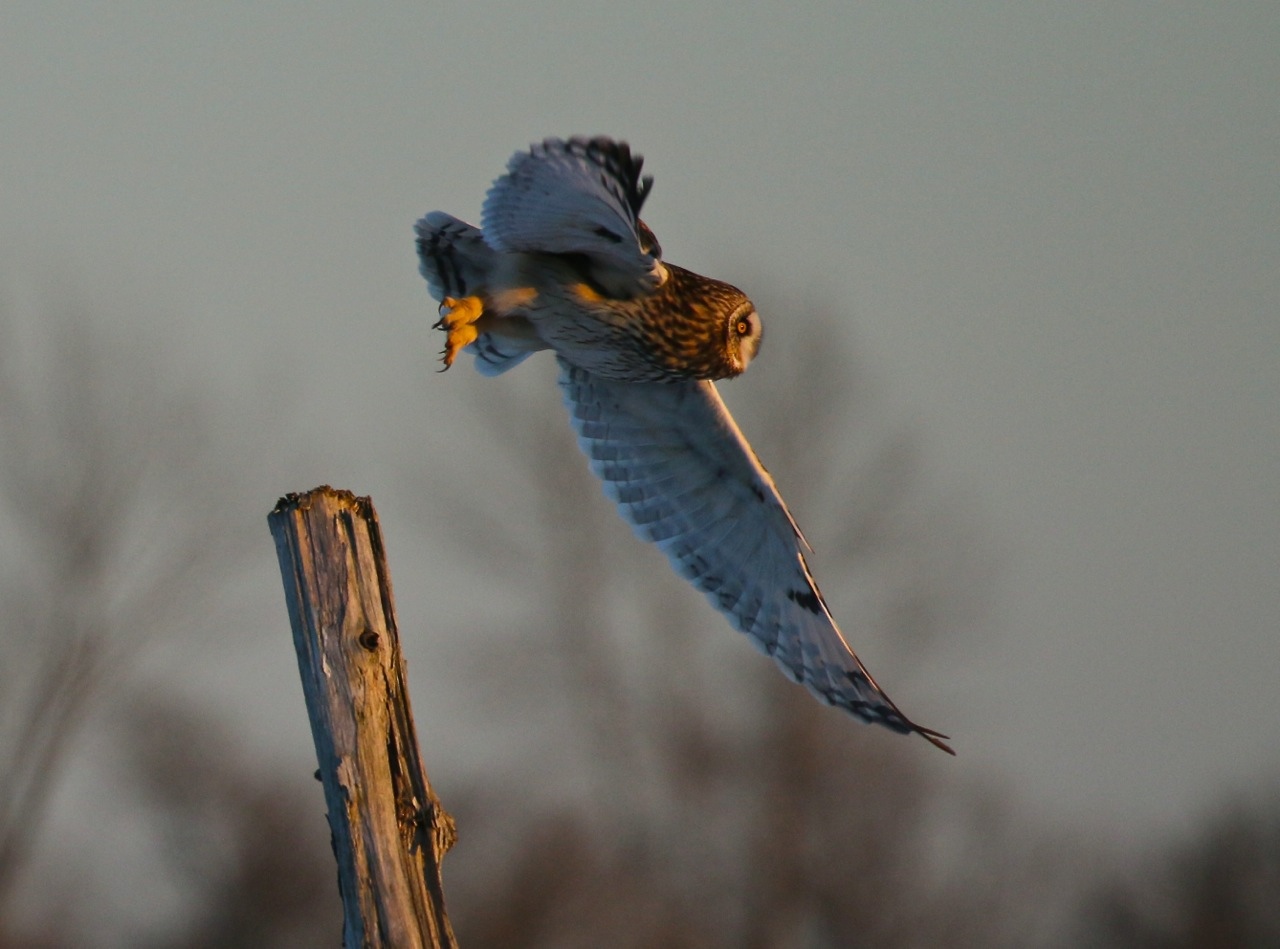 I have heard a lot about how these owls fly, but had never had a chance to watch until now.    Their small bodies and long wings make them buoyant and beautiful as they fly. 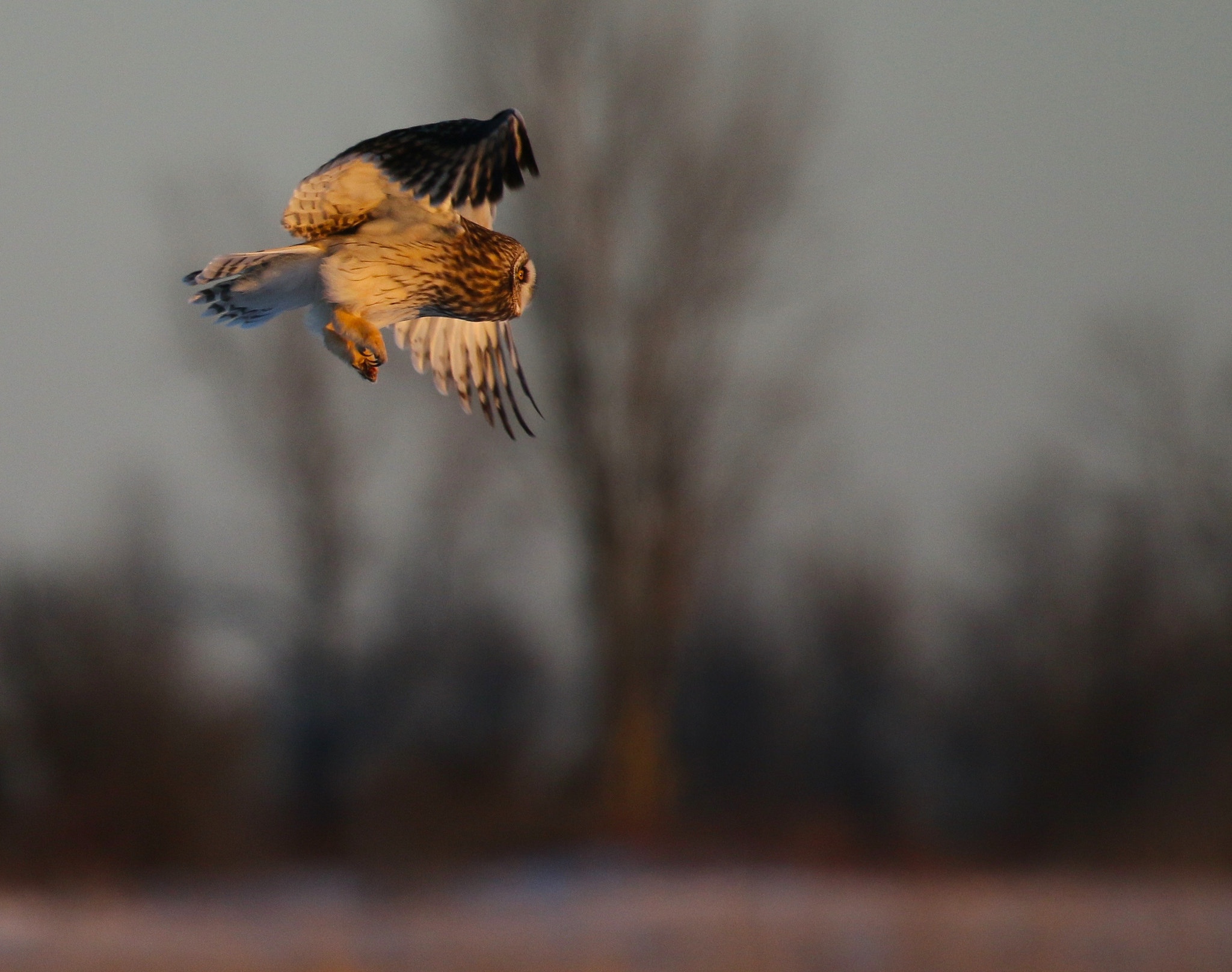 Here’s one of the last views I had of the owl, just as the sun was setting.    And just for a reality check… 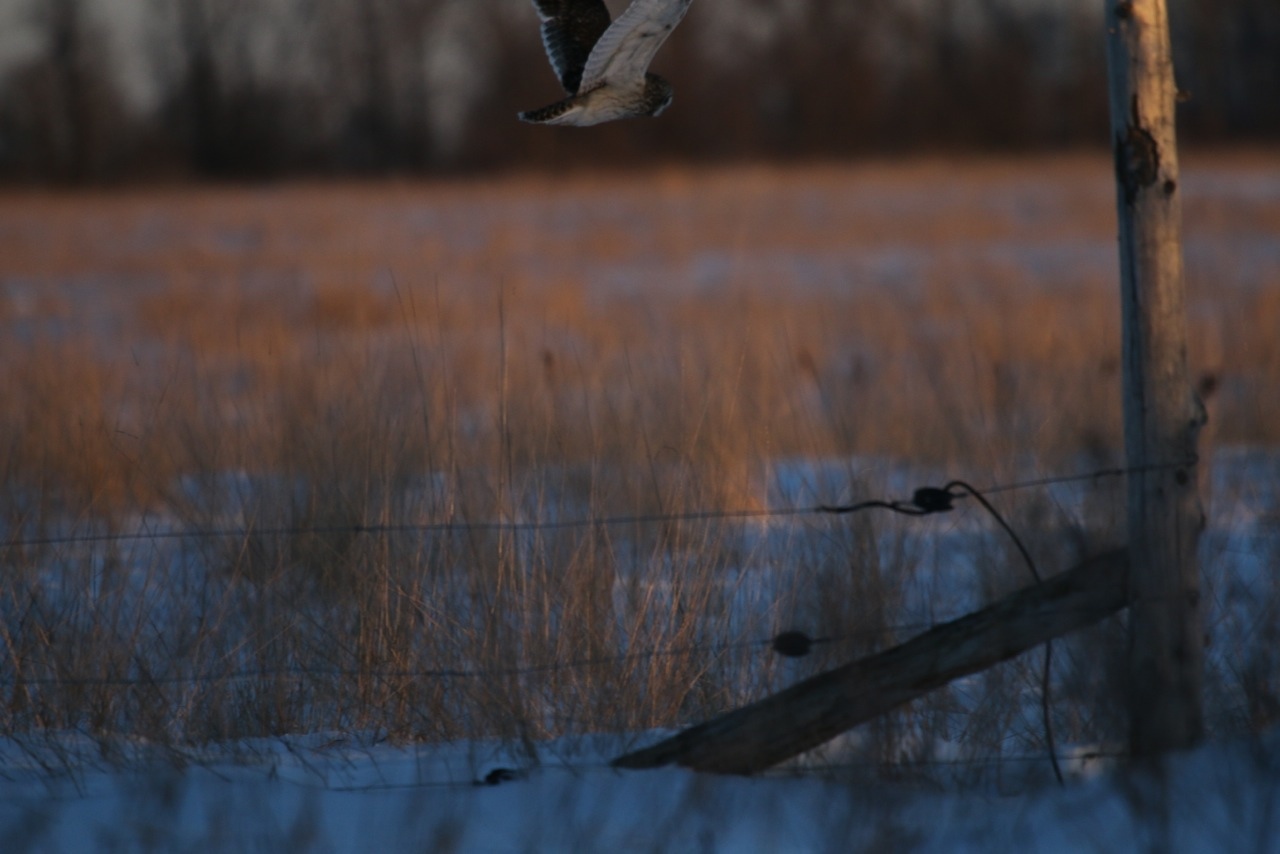 Here’s where I fell into the ditch!  The snow was pretty deep.   Nice shot. 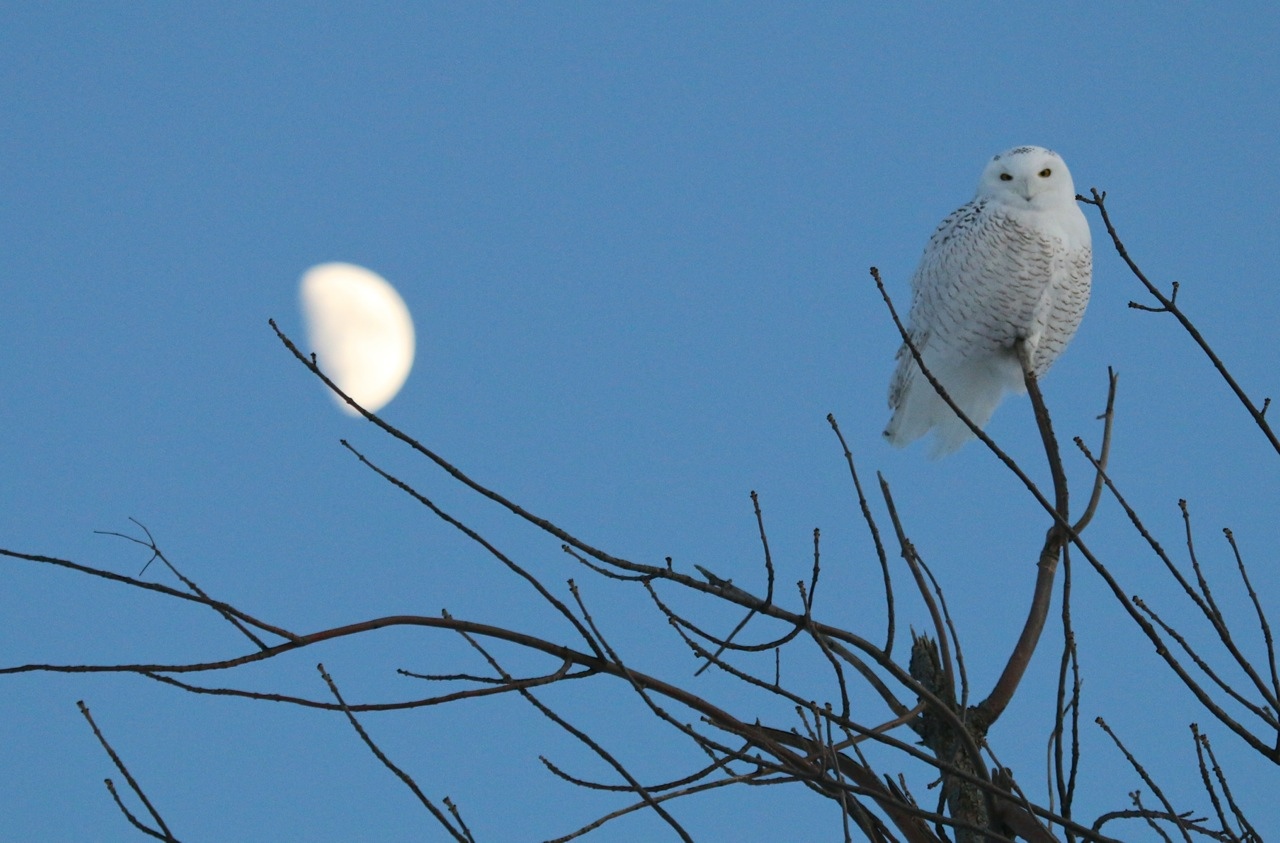 On my way back out to the ferry Snowy Owls started popping up where I had never seen them before.   As the sun goes down, these white ghostly owls come out to hunt.    Overall I believe I saw 6 Snowy Owls and 6 Short Eared Owls on my little safari to Amherst Island. 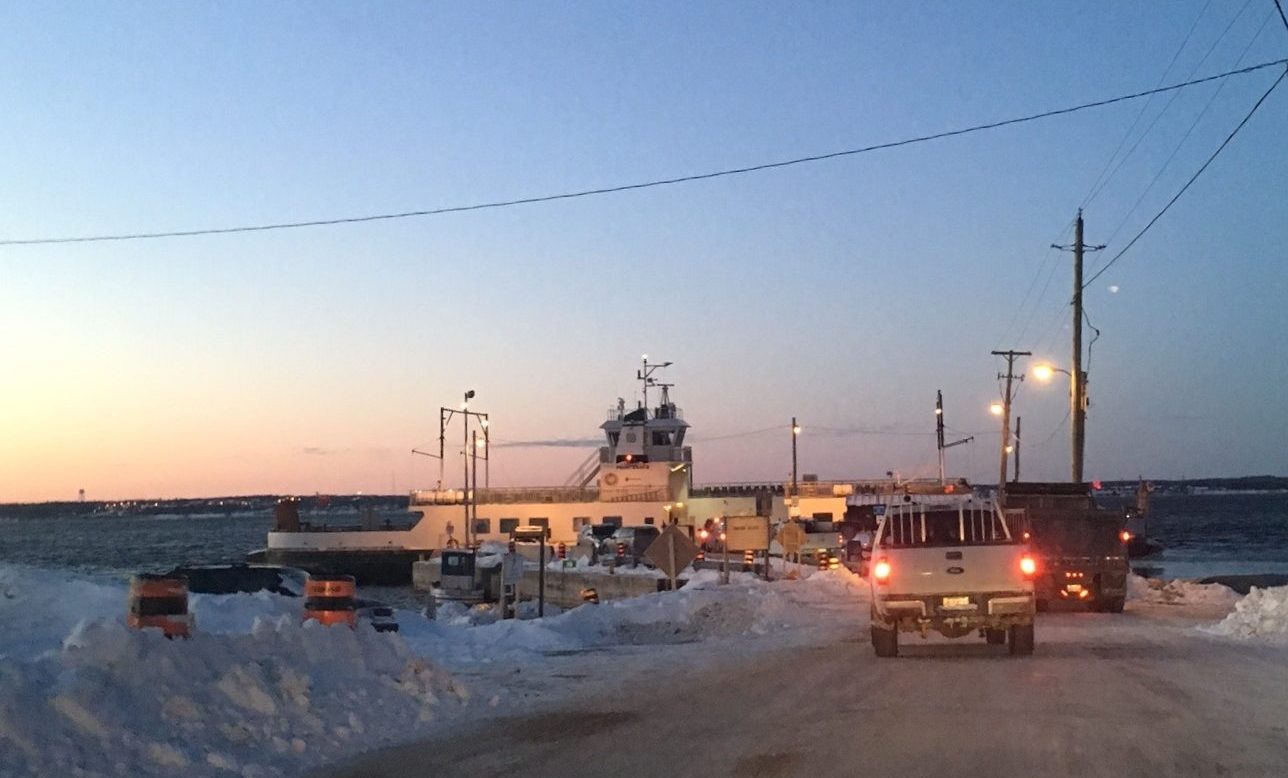 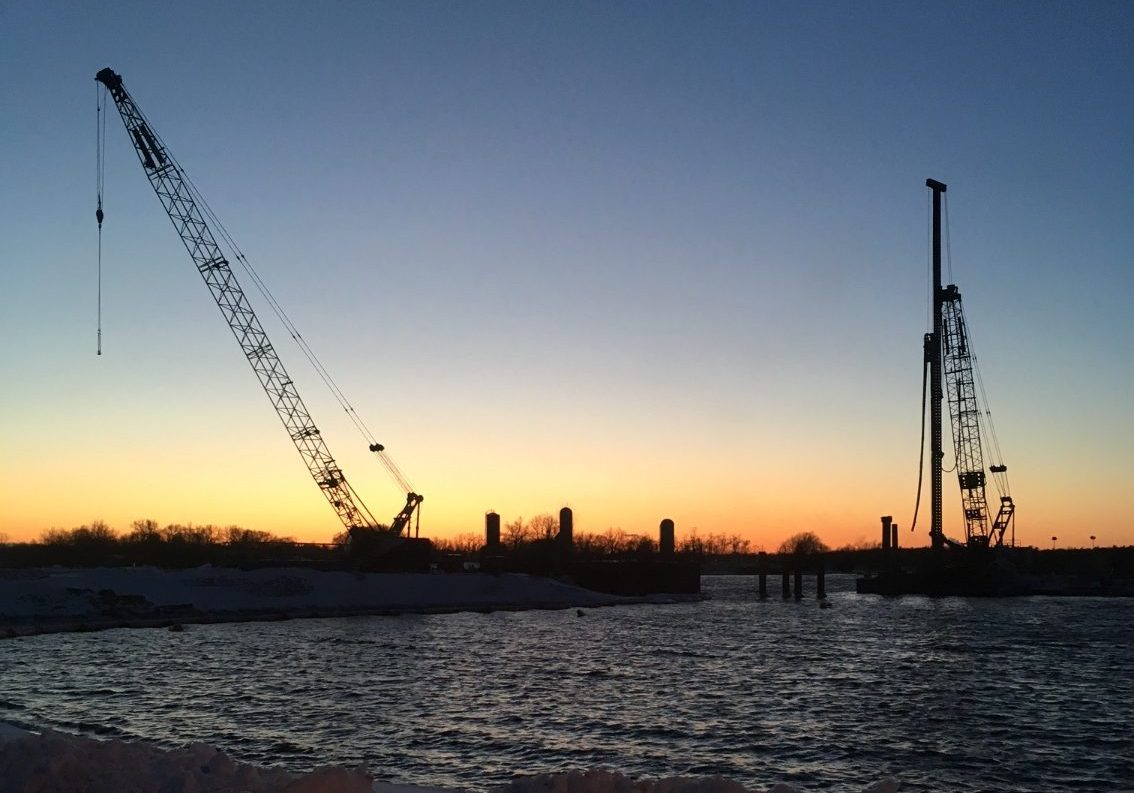 As I looked back on Amherst Island I could see the shapes of silos, surrounded by the cranes they are using to build a new ferry dock facility.    A couple of dozen wind turbines are being constructed on Amherst over the next few years, and there is construction all over the island.  But that’s another story.

Amherst Island is only a 60 minute drive and a 20 minute boat cruise away from my house.   I sometimes wonder why I don’t go there more often.   It’s amazing.