What started out as my one day bird-finding marathon on May 4 turned into a week long odyssey of birding.

Each year I devote one entire day to birdwatching – I line it up with the Global Big Day – where people all over the world go out one day in early May and locate as many  birds as they can in a 24 hour period.    The birds are recorded in the eBird database, run by the Cornell University Lab of Ornithology.   This year, that day in early May just served to get my birding obsession all fired up again for the spring. 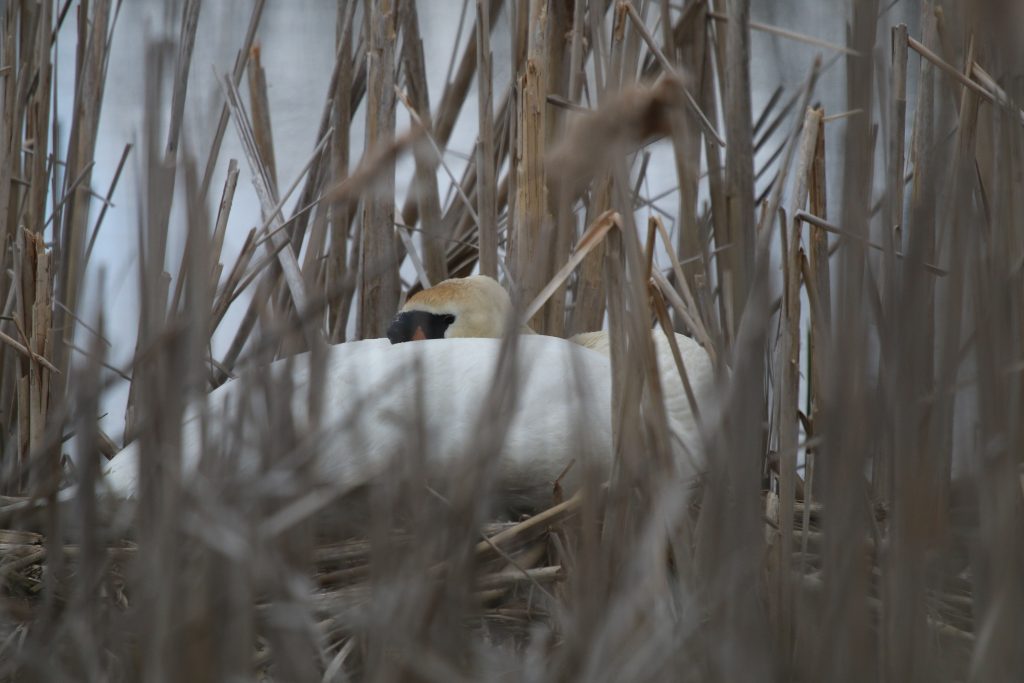 Mute Swan resting in her nest.

May 4 this year was cold, cloudy, and windy and I spent most of the day bundled up in my fleecy. I started out my day before sunrise, and was able to hear some night singers such as Whip-poor-wills, Woodcocks, and Turkeys. I spent an early breakfast watching my feeders, then headed out to my usual haunts- Presqu’ile Park and Brighton Constructed Wetlands. 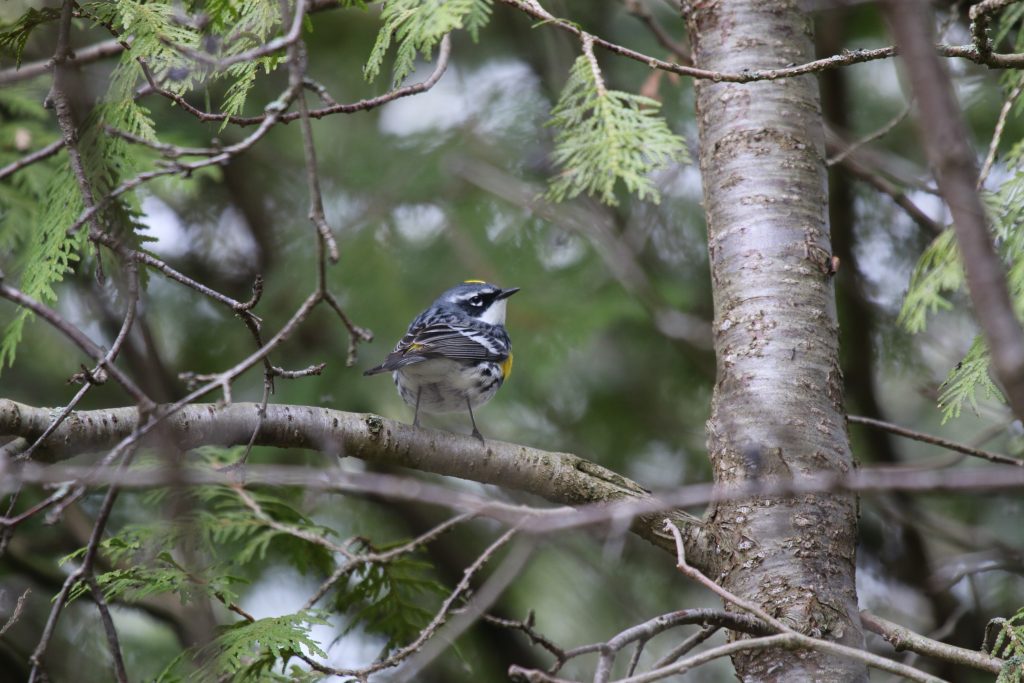 Many typical spring birds such as Grey Catbirds, Baltimore Orioles, and Hummingbirds, were not back yet, but a few warblers were starting to trickle in. 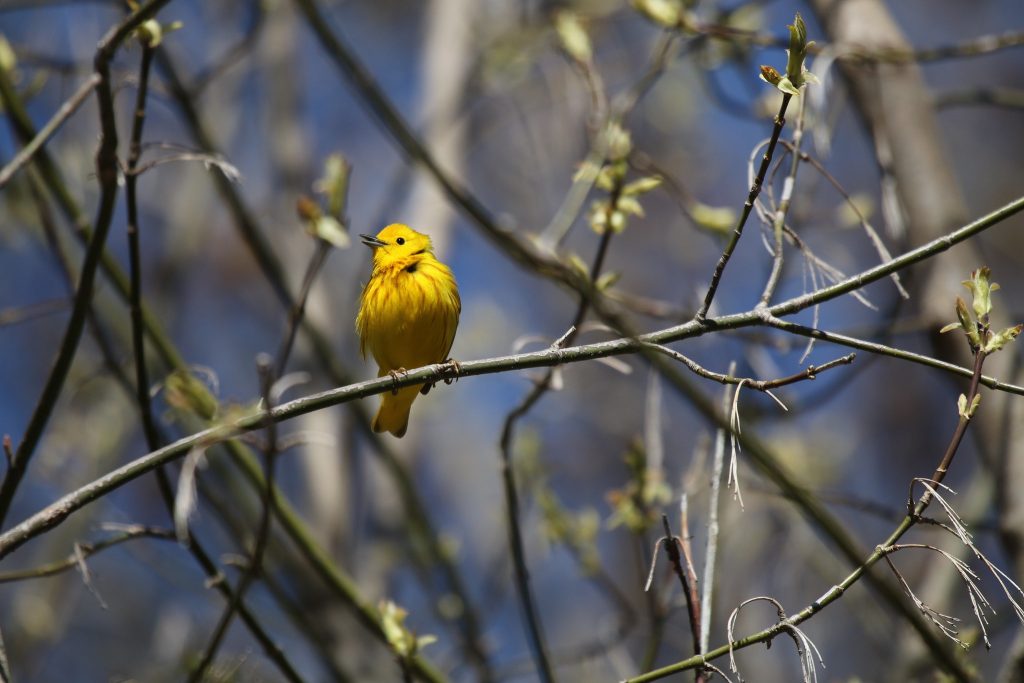 These little jewels are a highlight of migration for me. When I am doing a birding Big Day, the morning always moves along quite well, and I can rack up quite a few species in a short amount of time. For example, I heard and saw almost 50 different species of birds before I even left my house on that Saturday morning. Typically, the afternoon birds come much more slowly. I drove around looking for an American Kestrel that always sits on a certain telephone wire. Found it. I was thinking- Ospreys are back- where can I go to find one? 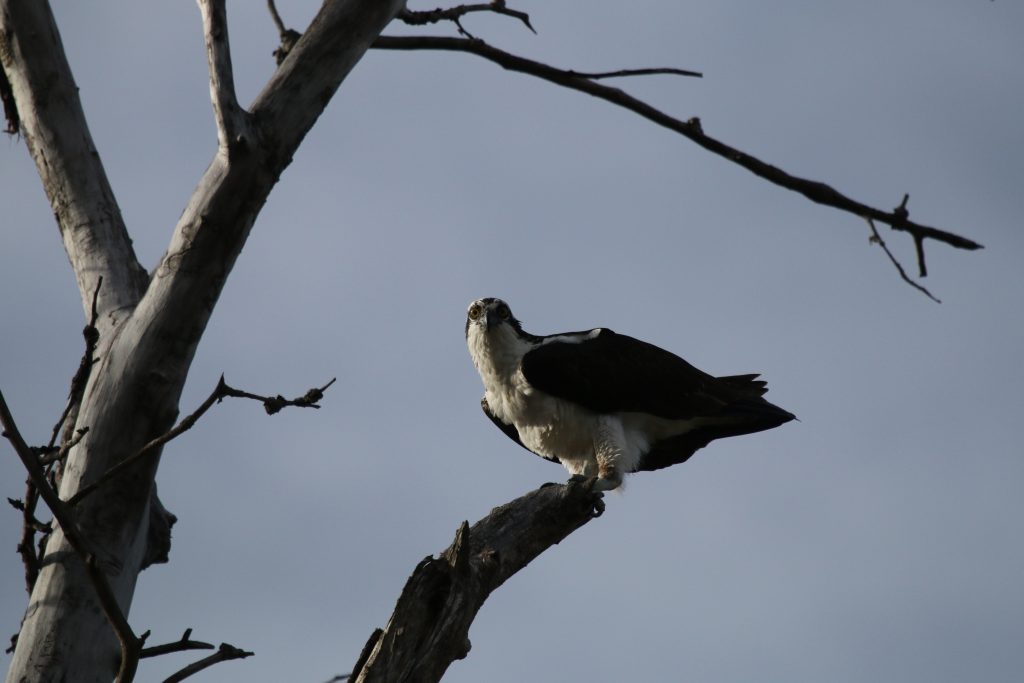 Osprey on my road

And as day turned into evening and I headed home to look for Ruffed Grouse, there was an Osprey sitting up in a tree at the side of my road. Never seen one on my road in all the time I have lived here, but there it was. 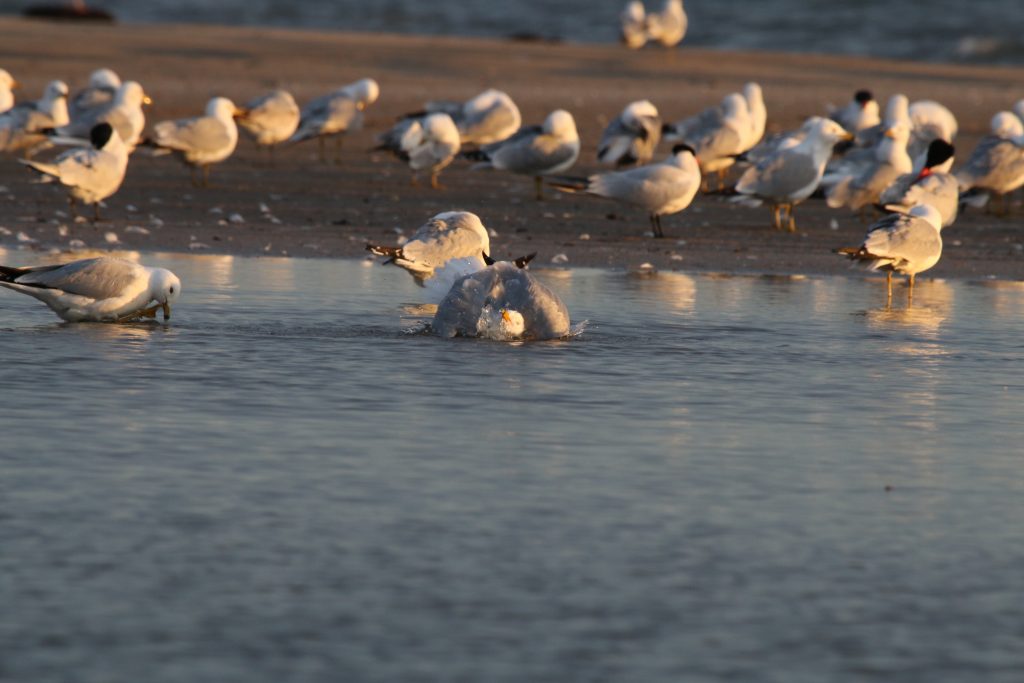 Bathing on the beach

I finished up my day with the gulls and terns down at the beach at Presqu’ile, where the sun peeked out for a bit before going down. All told, I found 95 species of birds on May 4. This is right around my average for the past 4 years- the bird count always hovers around 100. 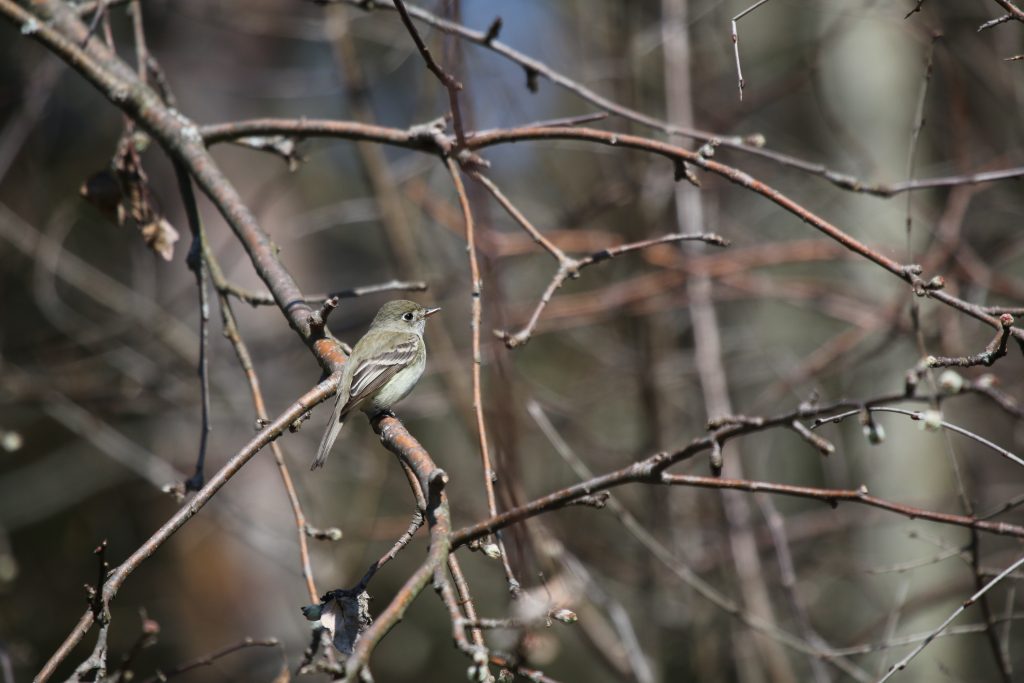 Guess what!? The next morning I got up really early, drove down to Prince Edward County, picked up a friend and her dad, and went birding at Prince Edward Point Bird observatory. This IBA (Important Birding Area) is a peninsula on the southeast side of Prince Edward County, and since it is an hour south of here, they are a bit ahead of us as far as seeing newly arrived species. There were quite a few flycatchers, like the one above. 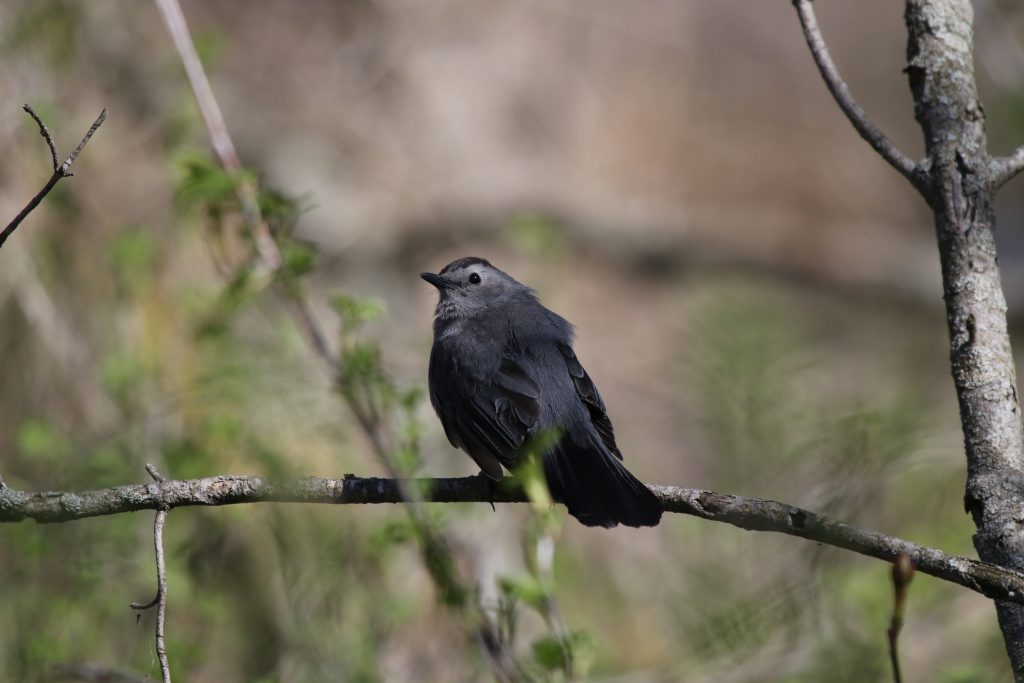 They also had Grey Catbirds – who really say “meow” at the end of their calls. This is a common spring bird here who was conspicuously missing from my “Big Day” list. Despite their plain appearance, catbirds are feisty songsters, who mimic other birds calls and can produce a symphony of slightly buzzy imitations to impress their potential mates. Love them. 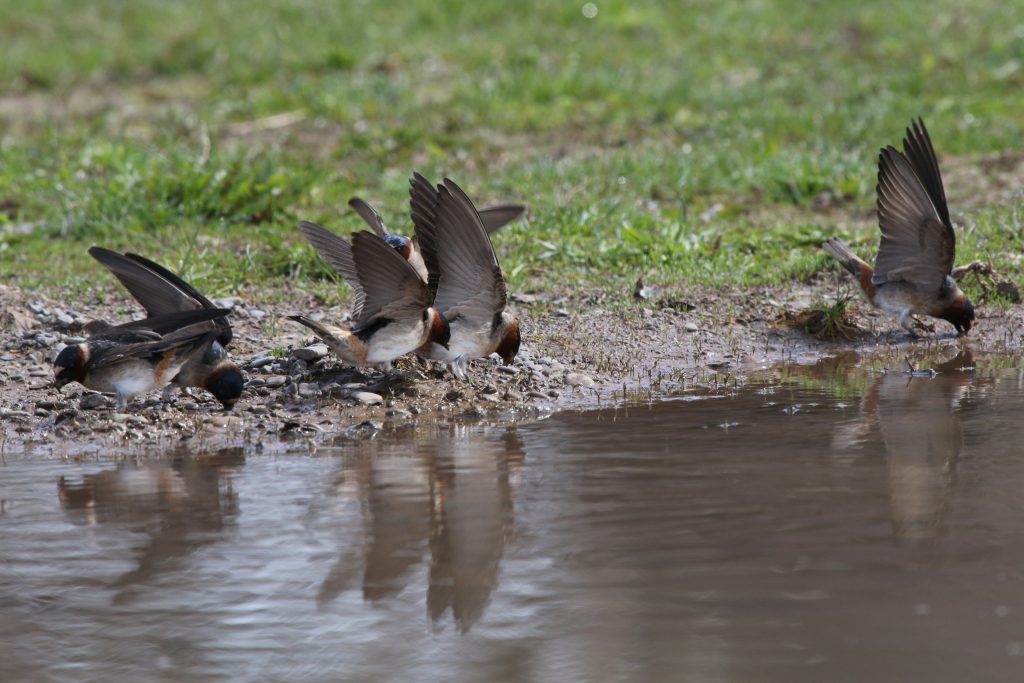 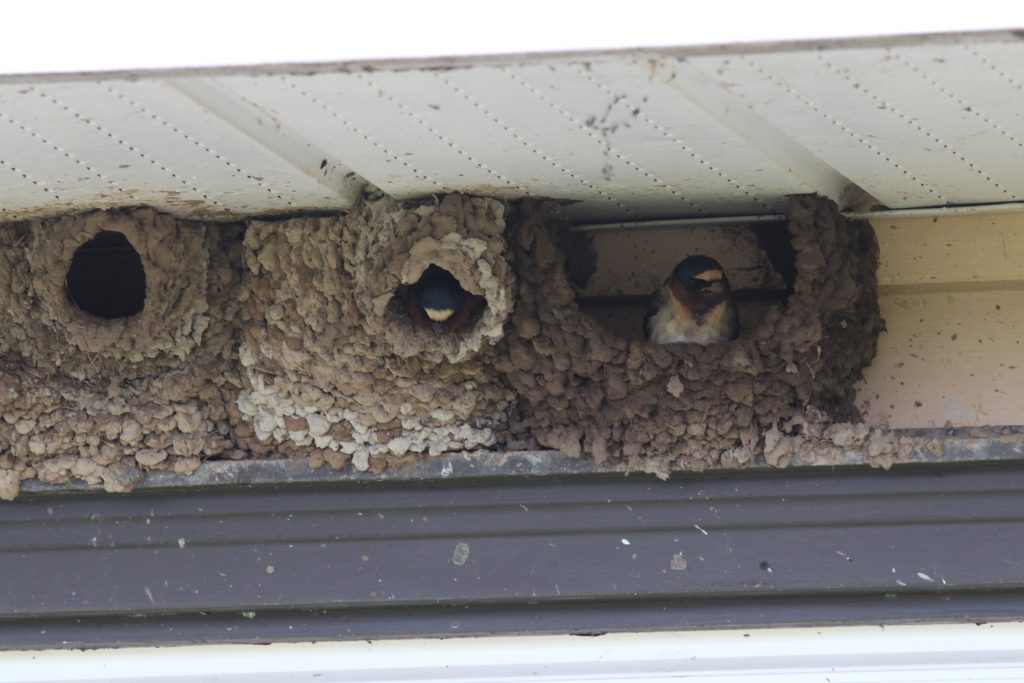 We were treated to the sight of dozens of Cliff Swallows building their nests, squeaking and congregating around a large mud puddle. 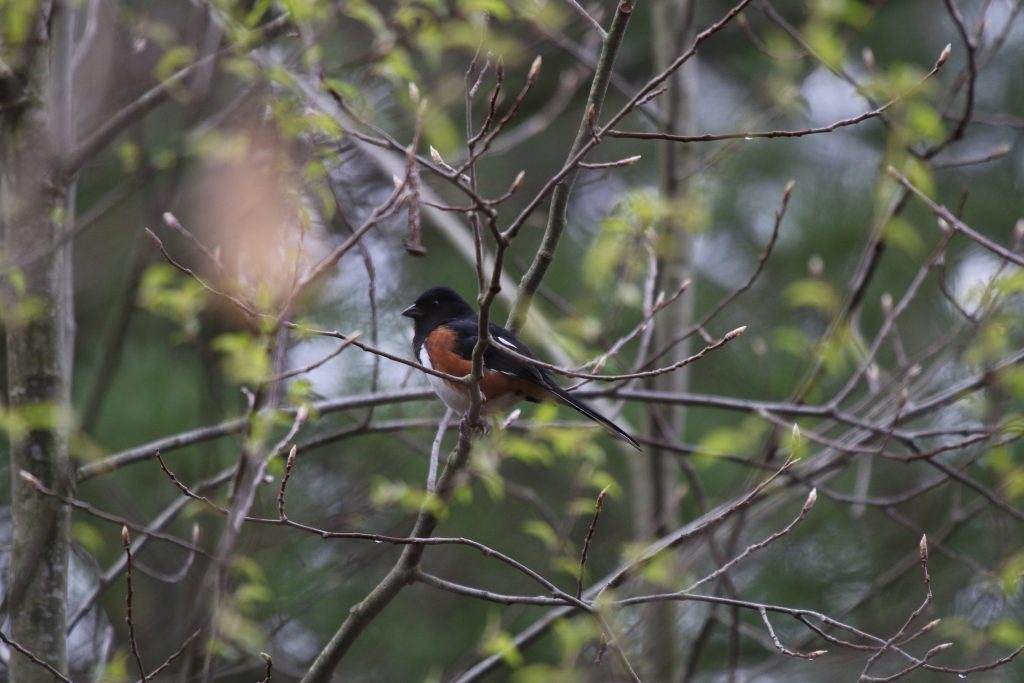 The constant call of “drink your teeeeeee” told us that there were Eastern Towhees in the undergrowth. Towhees are members of the sparrow family, with round bodies and lovely rusty red, white, and black colouring.  Prince Edward Point did not disappoint, and it was fun to share my day with friends. 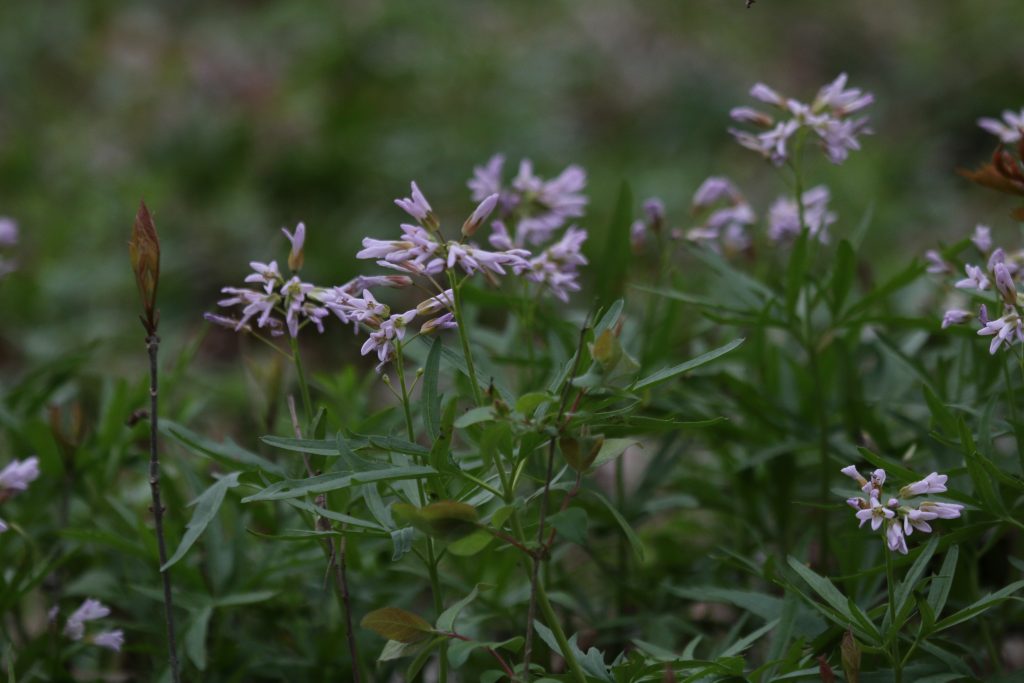 I finished off the week with a Mother’s Day weekend in Dundas with my daughter and her boyfriend. When we weren’t at the Hamilton Buttertart Festival or eating tacos, we spent time on the Royal Botanical Garden trails, where the wildflowers were in bloom, and the birds were singing their hearts out. 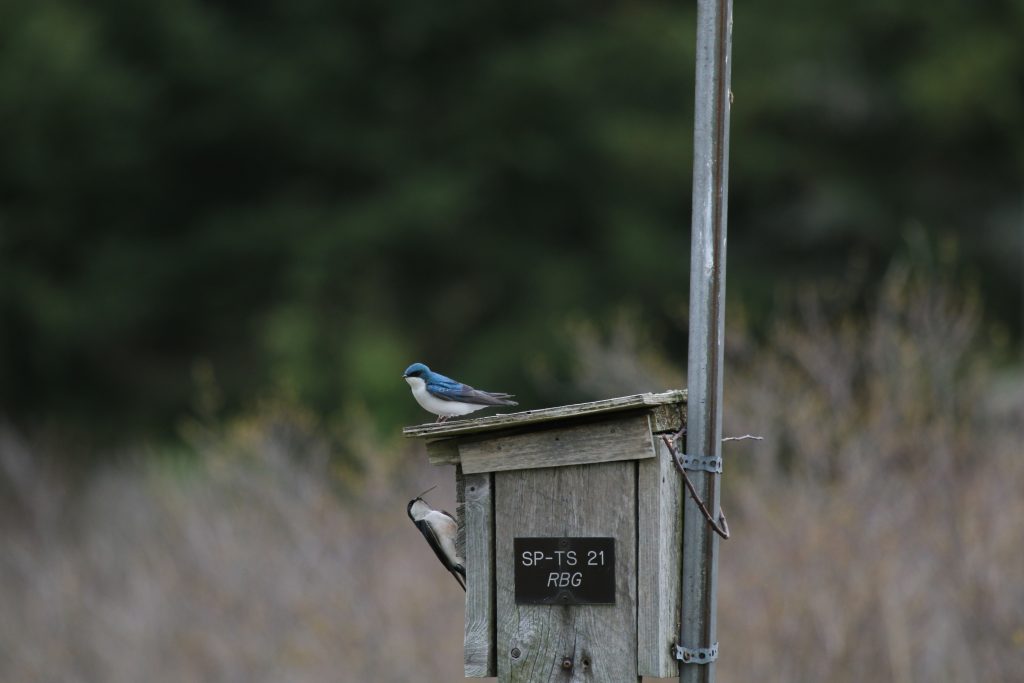 The RBG had some open fields with nest boxes, being used by Swallows, Bluebirds, and Wrens. 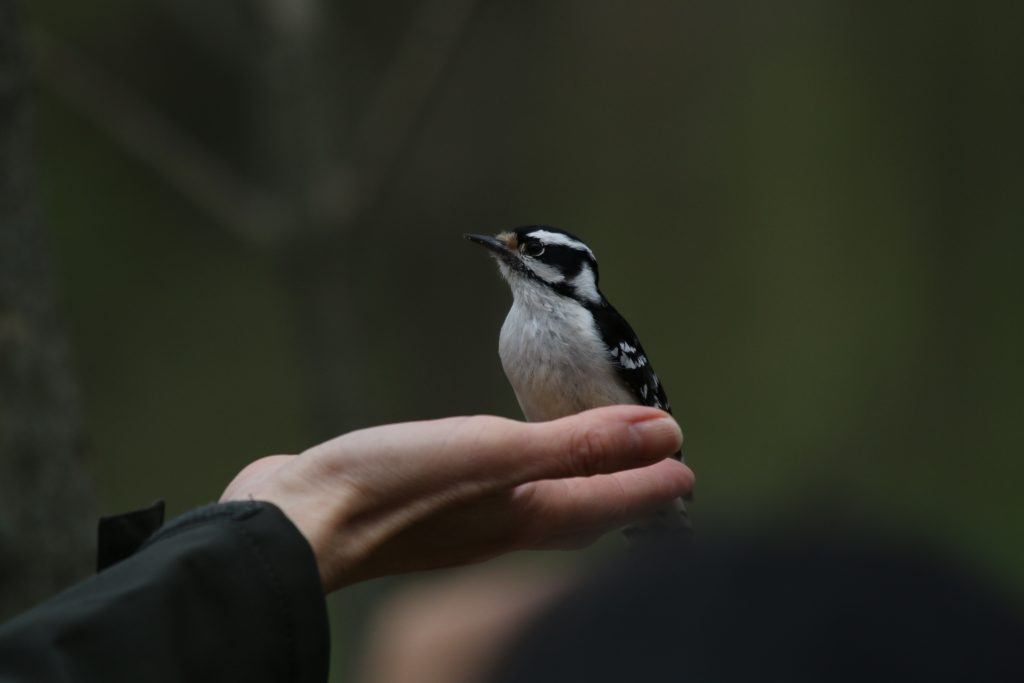 There were also magical wooded areas where the leaves were just beginning to emerge. On one little path we discovered a woman feeding a Downy Woodpecker peanuts from her hand! I have heard of feeding chickadees before, but never woodpeckers! A little boy and his mom were walking by and he got to feed the woodpecker from his hand too. He was thrilled. 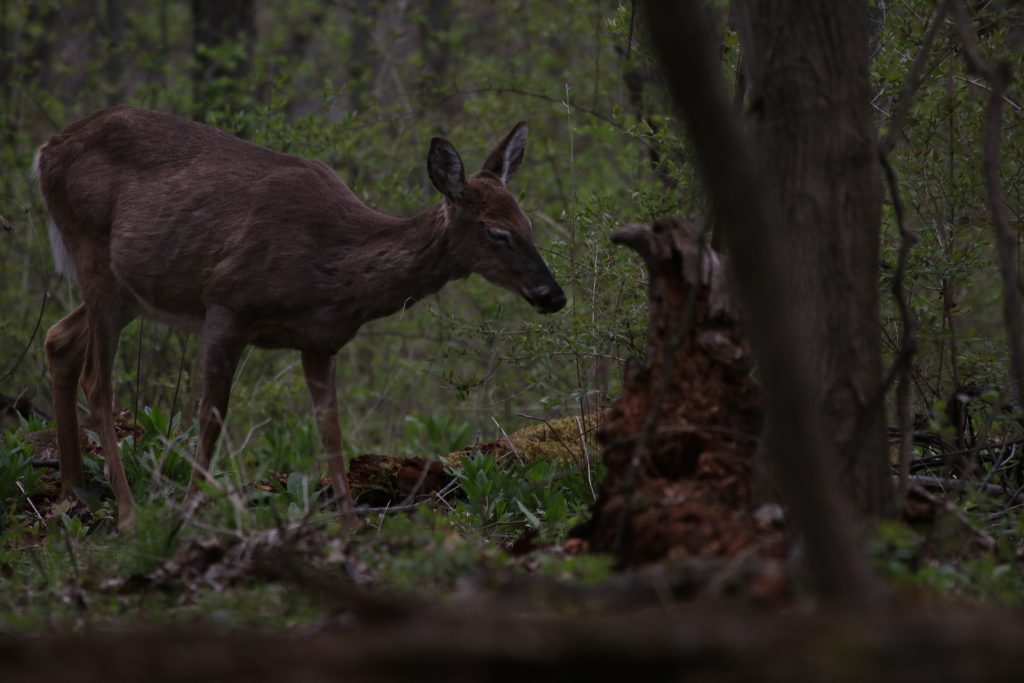 At the same time, two beautiful deer grazed peacefully in the woods just in front of us. 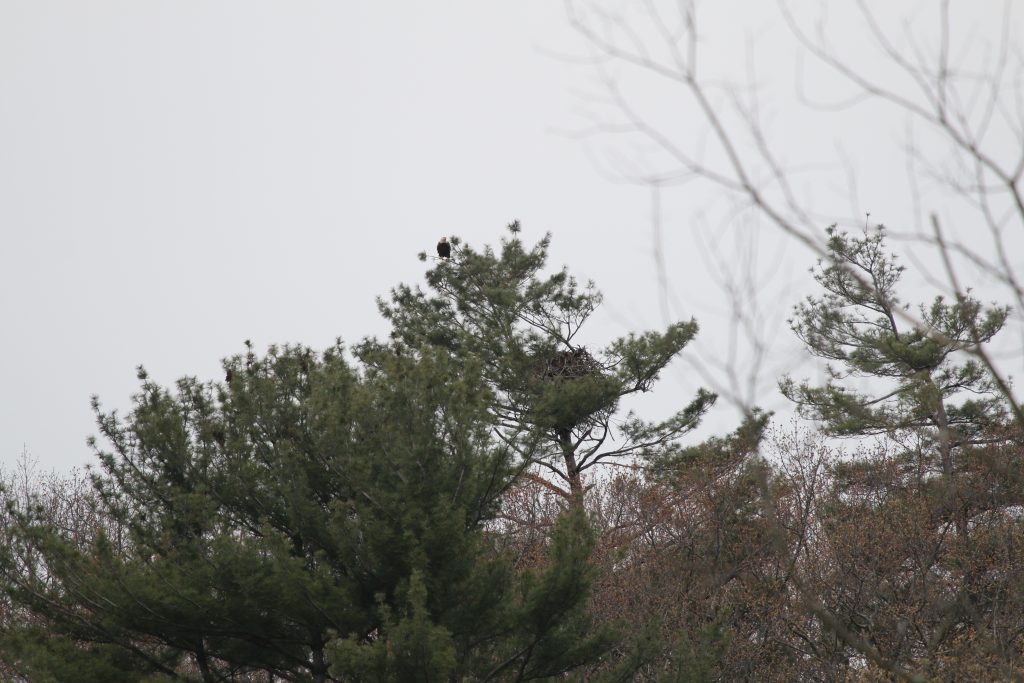 Once out of the woods we were treated to the view over a beautiful marshland at the far western end of Lake Ontario. There was a Bald Eagle near its nest and flying around. Sooo cool! Eagle was far away and backlit so it just looks like a blob haha. But if you look at the exact centre of this photo you can see the eagle’s nest- an impressively huge structure anchored in a pine tree. 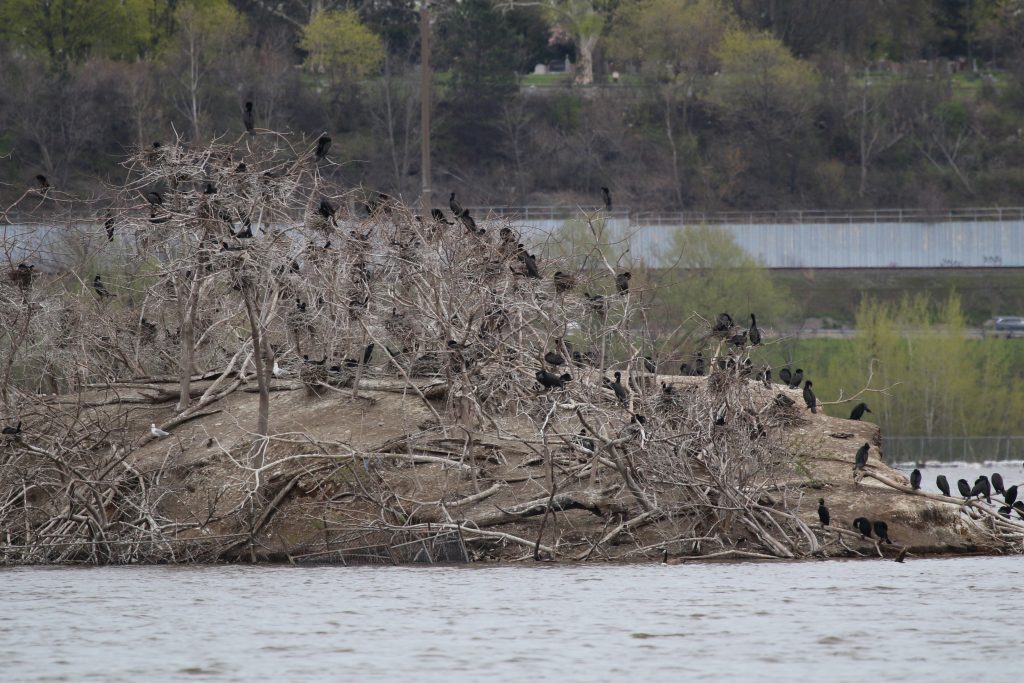 Much easier to photograph were the Double Crested Cormorants inhabiting a tiny island out in the lake. Their poop kills all vegetation, as you can see. 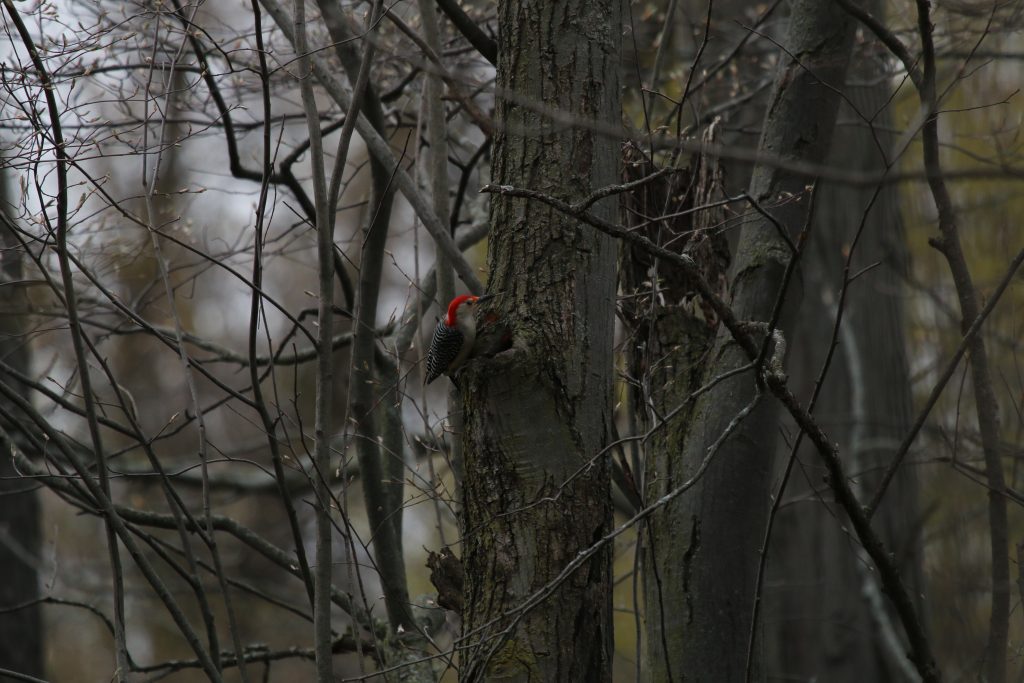 Back in the woods, we were treated to the sight of a Red Bellied Woodpecker working on a nest in a tree hole. 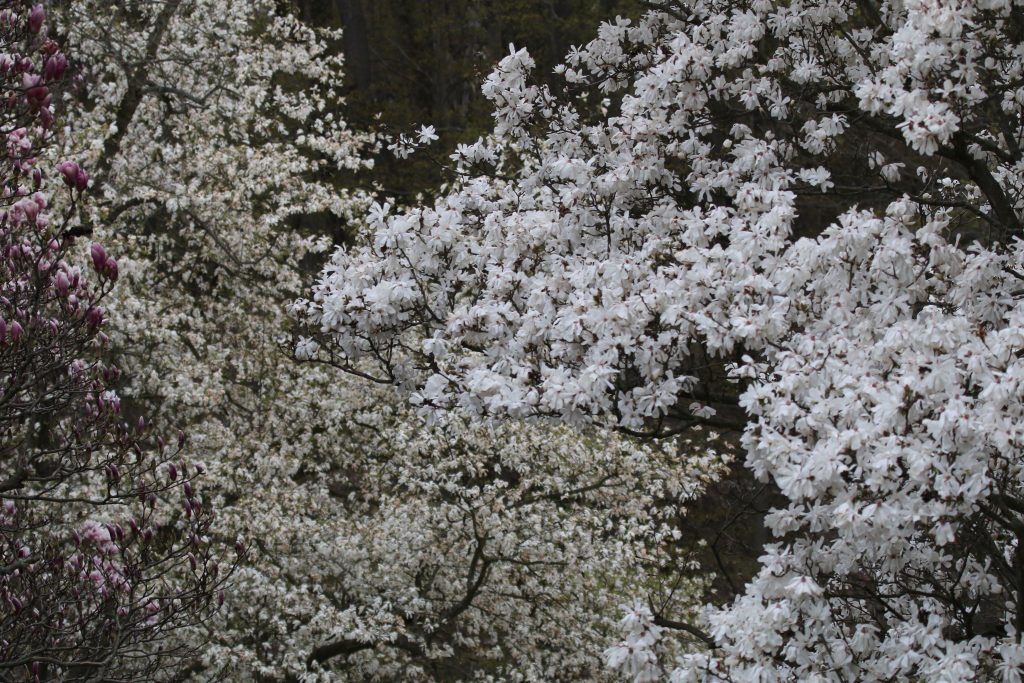 To cap off a lovely day, we entered a fairy tale meadow full of magnolia trees in full bloom.

Birding is so much more than birding, really.  It’s being outside, discovering what’s there, and spending time with family and friends, or some quiet time to myself.

May is not over yet.  I’m still birding!

Thanks for visiting my blog. Enjoy the spring!